The Vixen Discusses Art and Advocacy 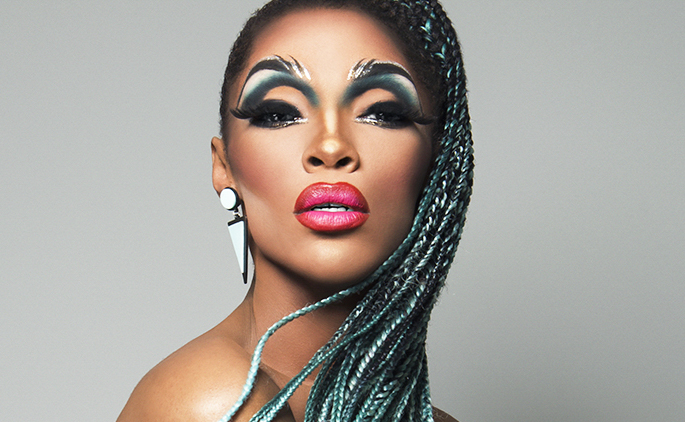 One of the most memorable recent contestants on hit reality television show “RuPaul’s Drag Race,” Chicago-based drag artist The Vixen made a lasting impression on many viewers last season thanks to her insistence on openly—and somewhat controversially—discussing the show’s previously unaddressed racial dynamics. However, while her time on “Drag Race” may have catapulted her further into the public eye, The Vixen has always been an outspoken advocate against racism in the drag world. This advocacy, as well as her career trajectory both prior to and following “Drag Race,” were a few of the topics addressed by The Vixen during a recent Q&A on campus, organized by University drag collective HOUSE.

“I’ve literally always been a performer,” The Vixen said, on the subject of her history as a performance artist. “And with that—being a performer and being androgynous—by the time I got to college there were people being like, ‘Why aren’t you doing drag?’ And I was like, ‘Hmm, no, those people don’t have eyebrows, I’m not doing that.’”

She did ultimately change her mind, citing Beyoncé’s 2013 Super Bowl performance as one of her first and strongest sources of inspiration.

“It definitely is that kind of strong Black woman trope,” The Vixen said, elaborating on the type of artist that has influenced her. “I think I was drawn to those types of characters—women who fought back and were strong and commanded the stage. So Tina Turner, Eartha Kitt, all those types of women really shaped [my work].”

Even before her time on “Drag Race,” The Vixen was blending performance with politics, most notably by co-founding “Black Girl Magic,” a drag show featuring exclusively Black performers, in 2016. The Vixen discussed both her original motivation in starting the show, as well as the ways in which her increased fame post–“Drag Race” has affected her influence as an activist.

“That started out of the idea that we needed more people of color onstage,” The Vixen said of “Black Girl Magic.” “And then through me making a lot of noise in Chicago and being in a lot of different newspapers and stuff like that, bars started taking me seriously and wanting to give me a show, and so I actually did and we had “Black Girl Magic,” and I was able to, once I did “Drag Race,” bring “Drag Race” girls in and now it’s on steroids…. What is different since ‘Drag Race’ is that if there’s a problem, yes I’m gonna tweet about it…but I’m also using the connections I now have to make something happen. I really can be the change I want to see.”

The Vixen didn’t shy away from talking about the main reason for her increased public recognition: her time as a “Drag Race” contestant, during which she drew both praise and criticism for openly confronting fellow contestants—as well as RuPaul, the show’s host—about their playing into toxic racial stereotypes.

“The thing about being on reality TV is there’s no reality,” The Vixen said, explaining why other contestants—particularly contestants of color—were unwilling to publicly back her up. “I went in to the show with the very specific intent to be myself and to not perform for the cameras, but nobody else went in like that. Everybody else went in knowing they better behave. So a lot of times it was hard for me because I would be speaking the truth to somebody, and they would be like, ‘You’re not wrong.’ Doing that and being in that moment is very surreal because what sucks about people telling you you’re not wrong is that they won’t say that you’re right.”

Ultimately, plenty of “Drag Race’s” viewers and alumni stood with The Vixen, praising her for addressing an issue that has been swept under the rug for too long. But before that, she spent plenty of time wondering if she had made the right decision.

“It took six months for me to get validation for everything,” The Vixen said. “I sat in a cave thinking, ‘You’re crazy, this was bad, this is gonna be really really bad.’ And then the rest of the world was like, ‘Good job!’”

“Now I’m trying really hard not to become Kanye,” she continued, to laughter from the audience. “It’s a slippery slope from righteousness to [becoming an] egomaniac.”

In light of her rapidly growing audience, the real question for The Vixen is what she plans to do next. With a rap album in the works along with plenty of other art and activism-related projects—including participating in the dating app Grindr’s anti-racial discrimination campaign “Kindr”—the performer already has plenty on her plate, but she hasn’t ruled out expanding “Black Girl Magic” beyond Chicago.

“It’s tricky because the earnest thing to do is to put ‘Black Girl Magic’ in cities that need it the most, like Detroit or Indianapolis,” The Vixen said. “The issue is the most impoverished cities can’t afford to put up a whole show. Which sucks because I can take it to New York, I can take it to LA, but they don’t really need it. Chicago is unique because it has a lot of diversity, but it has a lot of segregation, and that’s why [the show] pops there. Everybody knows there’s a ton of Black people in Chicago, but they’re not on the North Side, where most of our drag culture is…. I don’t own the phrase ‘Black Girl Magic,’ and if someone else does a show called ‘Black Girl Magic,’ I will send them a package of t-shirts. I can’t be everywhere at once, but I would love to see it everywhere.”