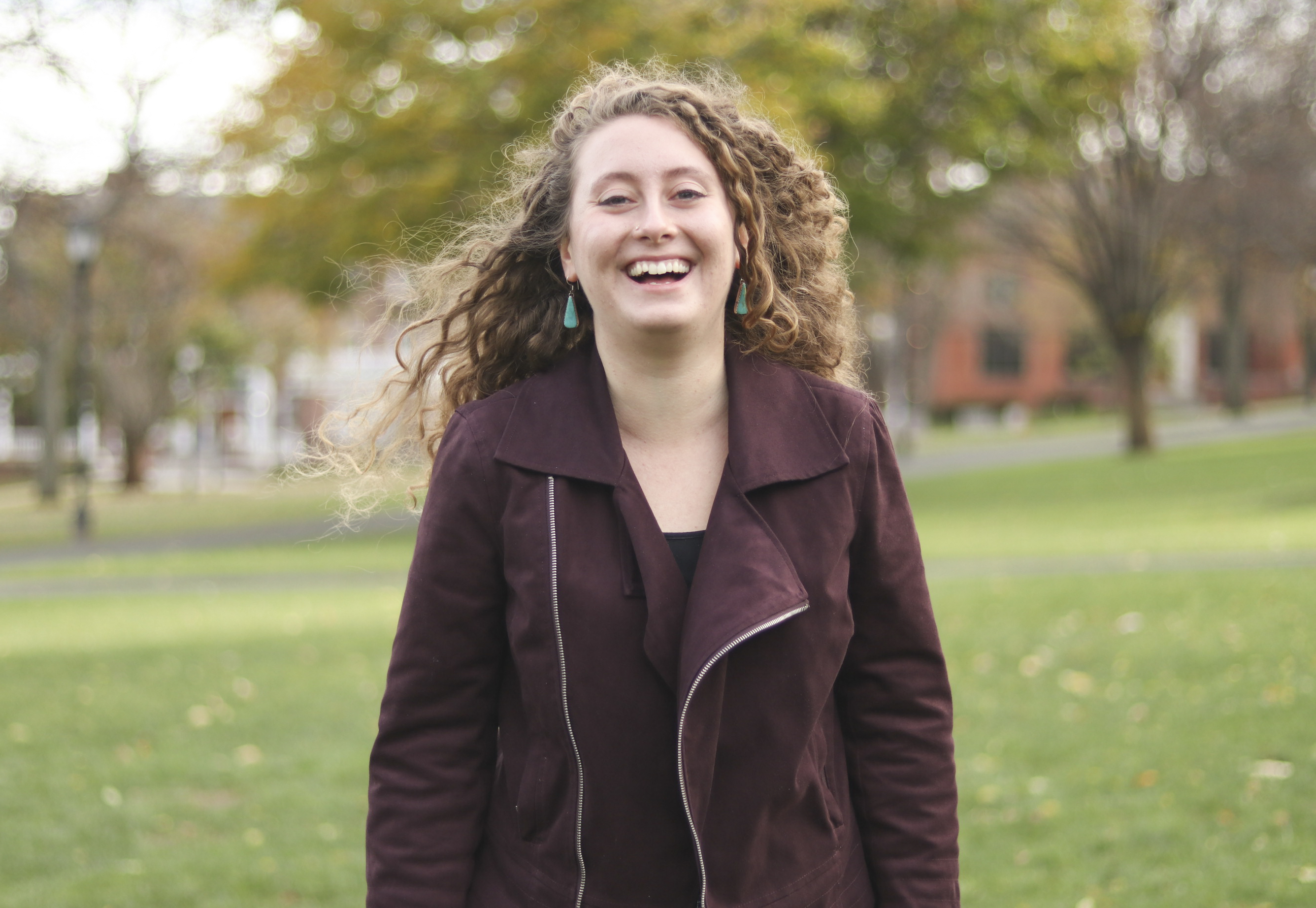 Rachele Merliss ’19 is a friend and advocate to many. Between her work with SACE (Survivor Advocacy and Community Education) and her lauded theatrical performances, Merliss truly deserves the title of WesCeleb. The Argus sat down with Merliss this week to talk about her passion for advocacy, her experience growing up Jewish in Lincoln, Neb., and making dreams come true.

The Argus: First of all, you just got quoted in The New York Times about your internship with Bust Magazine. What was that internship experience like?

Rachele Merliss: The internship was really amazing. I feel so, so lucky I was able to do it. I was working in Bust in Brooklyn as an Editorial Intern, which was great because I got to write every day. I love writing and I especially love talking about social justice and pop culture and how they intersect. The interview happened because this year was Bust’s 25-Year Anniversary. This reporter came in on the last day of my internship, and we like had to say goodbye to everyone, so the heads of the magazine had a going-away party for me. The reporter happened to sit in on when the heads make you talk about your experience on the last day, and she got to know me through that. Later, she got my number from my employers and called me asking for an interview. I was like, in bed probably in pajamas having this conversation.

A: What do you do as the SACE intern?

RM: Well I did it last year back when it used to be the SART (Sexual Assault Response Team) internship, and now it’s with the SACE. It’s the same job, but we just changed the name because the SACE department got added last year. It’s a lot of working with issues of sexual assault on campus by doing events and educational initiatives. I work orientation every year and I receive disclosures from students, so if they’ve ever experienced any kind of stalking or sexual assault or harassment, they come to me for support options. It can be anything from personal support to if they want to go through Title IX or if any of the University or Middletown resources can support you. It’s definitely exhausting sometimes, but I love doing it. I’m also more used to it this year, and I’ve made a lot of amazing friends through it.

A: Right now you’re the Intimacy Choreographer for Legally Blonde, and you also acted in The Wolves, which features themes of sexual assault. When did you start combining your advocacy work with theater?

RM: I do a lot of advocacy and I do a lot of theater so at some point they were going to mix. It actually started when Emma Pasarow [’18] went up to me at a party and asked me to help with her thesis because it had themes of sexual violence in it. She was like, “Can you help me with this, because you know both of each world,” and after that more people have approached me. I’ve worked on five shows now. Basically, it’s an emerging field in theater, and it’s the same as a fight choreographer in that you should have someone come in for staged intimacy so there’s consent and safety. It’s a really cool job that’s growing in the real theater world, so I’m happy it’s coming to campus too.

A:  Is that something you’d like to continue doing after college?

RM: I have too many plans! But I would definitely like to continue doing that, because it’s just really awesome. It’s one of my favorite things to do on campus. I would love to act more after college because I love that too, but I also love the advocacy work so I’d love to get a job with any type of sexual assault prevention or social justice work. I’d also love to work for another magazine and I also want to go to law school! It’s a lot going on.

A: Tell me about your past experience doing theater at Wes.

RM: I’ve been able to act every semester here, so I’m very lucky. It’s been so fun. I’ve made some of my best friends doing theater. Going into college, I did theater in high school and thought I would branch out more, but once I got here I figured out a way to do both by just being really busy. Theater here is awesome. It’s been such a positive experience, and I’ve learned so much. It’s a lot more collaborative than what I had been doing previously, and it’s been great to have a hand in creating shows, too.

A: Creating shows? Can you tell me more about that?

RM: I was in “The Self” my sophomore year, which was Jess Wolinsky’s [’17] theater capstone. We all wrote it together—it wasn’t fiction, it was about our lives, and we played ourselves in some scenes and other characters in others. Isaac Gotterer [’19] played my dad, which was very fun. That was my favorite project I’ve ever worked on because it was so meaningful to all of us.

A: You mentioned that you’re from Lincoln, Neb. Did you have any sort of culture shock when you got to Wes?

RM: [laughs] Yes, definitely! I didn’t think I’d have a culture shock. I was like, “I’m gonna be fine!” and people from home were like, “Why are you leaving the state? Why would you do that?” But I totally did have culture shock. Certain things here are very different—the way people dress, and I had to catch up on slang. Slang gets to Nebraska really late; we just started saying “dope” two years ago. But it gives me a really unique perspective. People from New York or L.A. don’t have as much experience talking to people they disagree with, and I always had to be able to reason everything I said and back everything up with facts and sources to get people to take me seriously. It’s been a really good skill to develop. Now I have a reserve of stats and data in my brain, so if anyone tries me, I’m ready.

A: You also live with another WesCeleb, Nick Yeager [’19], who lives in Texas. Do you ever bond about being from “Middle America”?

RM: Nick and I keep a whiteboard in our house where we tally every time people talk about certain subjects. We tally up whenever Nick and I bring up regionalism, and it’s all the time.

A: Let’s go back to Bust. What kind of stuff did you get to write for the magazine?

RM: Well, my editors had this policy that if you finished your article assignment for the day, you could work on any personal writing that you’ve pitched. My big article the whole summer was about sexual harassment at summer camps, which is something I’ve been wanting to work on for a while. I saw the chance to make it real and took it, and luckily, it worked out. They actually published it on my last day!

A: Did you attend summer camp or work as a counselor?

RM: I was a counselor the summer after my freshman year at the same camp I went to growing up. It’s this Jewish camp in Wisconsin—it was really nice to be in a place where everyone was Jewish because I was used to getting a lot of terrible comments about it. It was nice to get summers where I could just be outside with my friends and enjoying the sun.

RM: It was wild! There’s not many Jews in Nebraska. My first memory of anything weird happening was in kindergarten when this girl said I was going to hell for being Jewish, and we were both confused because I didn’t know what hell was and neither did she. That happened a lot growing up—even some wild stuff, like being asked if I drink the blood of Christian babies and if I have horns. They searched for horns in my hair, and that was a big deal because no one had curly hair, and everyone told me I should straighten it.

A: Did that ever die down as you got older?

RM: I was so proud because my high school was a lot better; it was the most diverse school in the city, and we were really proud of the fact that we had a lot of immigrants and refugees. That was a really amazing environment to be in, except for a few people recommending that I read the Bible, and one girl who interrogated me about whether I’d had premarital sex. It made me a lot more sassy. Like now it really doesn’t phase me because I can really speak my mind about it. I was a shy and kind of passive child growing up, and this taught me to stand up and call people out if they’re being shitty.

A: Have you found any sort of relief with the Jewish community here at Wes?

RM: It was nice to get here and breathe. Getting to meet other Jews and have that community has been a great part of my experience here.

A: What have been some of your favorite moments at Wes?

RM: I feel like I’ve pulled a lot of fun shenanigans. I’ve definitely snuck into some buildings I wasn’t supposed to be in. I snuck into a secret society party with my friend, and I hope that’s my legacy here. Gotten onto some roofs, things like that. If anyone wants to pull a prank or steal something, hit me up. A thing about coming from Nebraska is that I got really used to making my own fun. I got used to breaking a lot of rules and pranking people because that was the only way to have fun.

A: Any things you want to do before you graduate?

RM: I want to finish my thesis without dying! I’d love to do more theater if they’ll have me. Theater is great because it’s making imaginary things as real as you can, and everyone is collaborating to make someone’s vision come true. It’s one of the best things we can do for each other, and whenever a friend comes to me with an idea I want to help as much as possible. You’re literally making someone’s dream come true. I also want to have a lot of fun with my friends! I want to spend as much time with everyone as possible, but I also want to make new friends! Basically as many friends as possible.