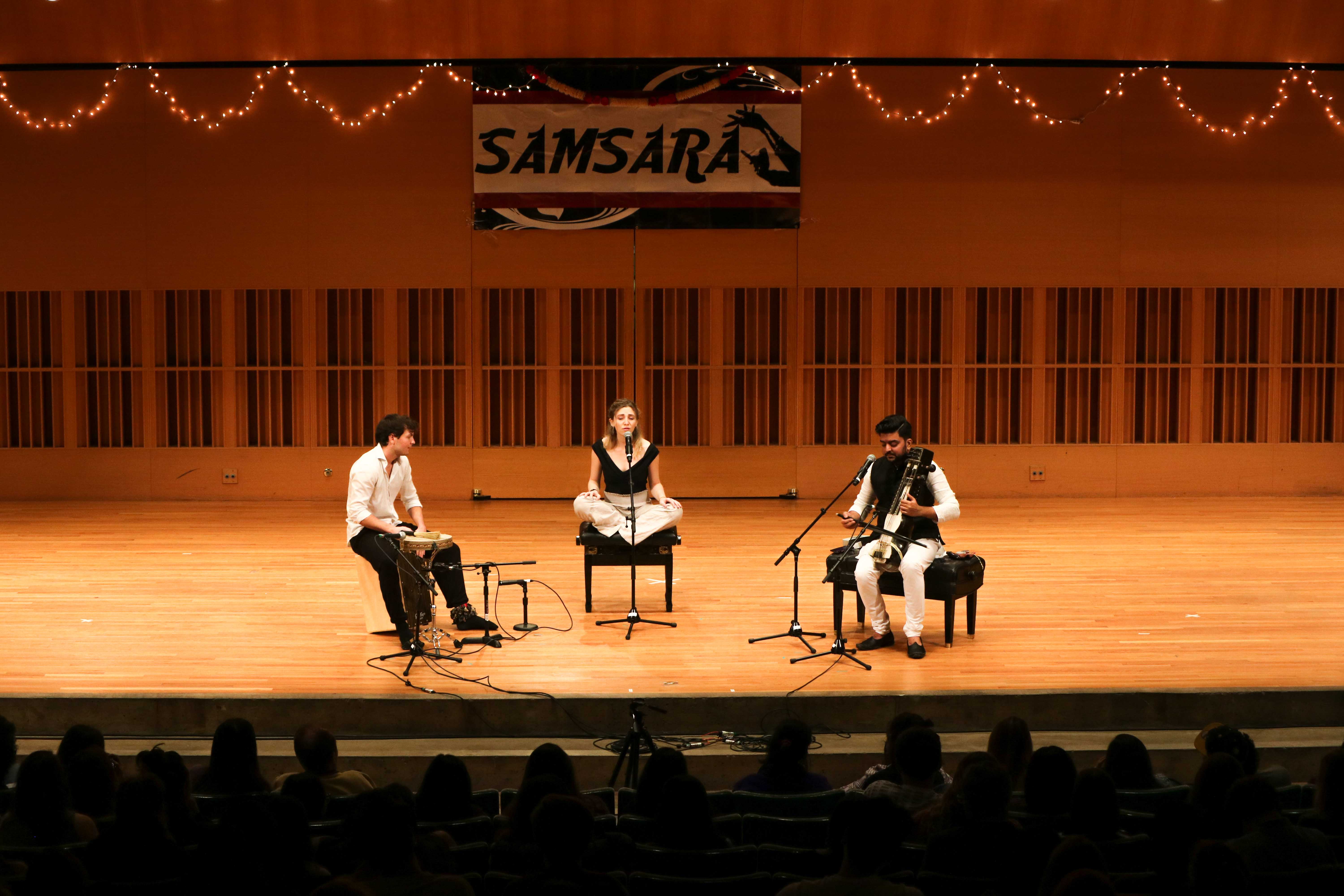 A multicultural, multi-genre performance that attracts hundreds of students every year, Samsara—the most recent version of which occurred this past Saturday—is one of the best ways to experience South Asian culture on campus. Samsara is organized every year by Shakti, the University’s South Asian student association, to showcase South Asian art and culture through a wide variety of student performances which include music, poetry, and dancing. These performances are interspersed with scenes from a lengthy skit, which is written by Shakti members and generally addresses topics relevant to the lives of South Asian students on campus. This year’s skit, which starred first-year students Tanvi Punja, Roshaan Siddiqui, and Tashfia Jilu as—fittingly enough—a trio of nervous first-year students at Wesleyan University, dealt with themes of diversity and stereotyping within the greater South Asian community. In a series of extended flashbacks, the skit followed the three protagonists on their respective journeys to college, exploring their differing cultural backgrounds and familial expectations.

“I love the way that the skit relies on first years in order to be successful,” Saadia Naeem ’20, who also acted in the skit as one of the protagonist’s parents, told The Argus. “The individuals who chose to be leads took on a tremendous responsibility, and they absolutely killed it this year…. My favorite aspect of Samsara this year was that I felt that the skit was more substantive in terms of its social commentary [than] in my first couple of years at Wes. I personally loved how much I could relate to the topics of the show. And that was the goal of the skit this year, so I’m incredibly happy that we were able to fulfill that goal with care and a lot of humor mixed in as well.”

Arjun Nayar ’19 expressed similar sentiments about the show’s increased focus on the diversity of South Asian cultures and beliefs.

“I think this year in particular we did a great job emphasizing in our skit that Shakti is a South Asian group and not just an Indian group,” Nayar said. “Which is something I think we had failed to do in previous years.” 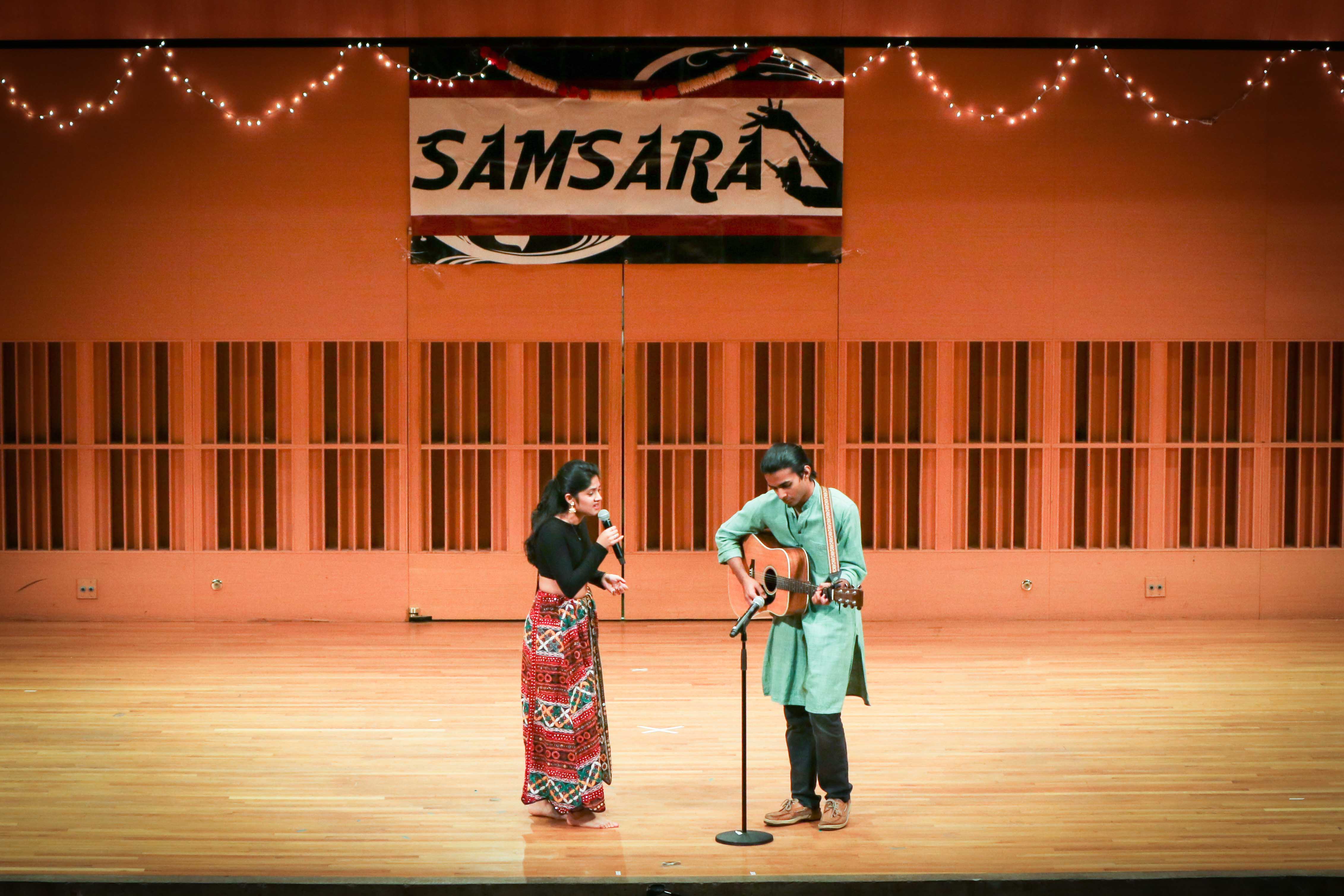 While in past years, Samsara has generally occurred towards the beginning of December, this year’s show took place on Nov. 3, nearly a month earlier than usual, due to scheduling conflicts with other events in Crowell Concert Hall. This change in timing led to an accelerated rehearsal schedule.

“This shortened period meant that we’ve basically been working on Samsara since the second week of school; normally the focus doesn’t go onto Samsara until early October,” Naeem explained. “So that shortened period definitely put the pressure on us, and I think that we really rose up to that challenge.”

Other members of Shakti commented on their own personal challenges during the rehearsal process, which ranged from keeping up at dance practices to memorizing lines.

“The most challenging part of Samsara was definitely getting the courage to go on stage as an MC,” Faizan Razak ’20, who served as one of the show’s two masters of ceremony, told The Argus. “I had never spoken in a crowd like that before. Being an MC was definitely harder than my roles in the past, but it was also so much more rewarding because I felt like I was really contributing to the show, and I loved being more committed.”

Perhaps the most beloved Samsara tradition is the class dances, which are choreographed separately by Shakti members of each class year. These dances are one of the most accessible ways to get involved in Samsara, since they are intended for dancers of all skill levels, but that doesn’t mean they don’t require hard work.

“[My biggest challenge] without a doubt would have to be trying to master all of the moves in the sophomore dance,” Shiv Khanna ’21 said. “My dancing skills are lacking to begin with, and trying to learn an unfamiliar style of dance was tough.”

For Shakti President Medha Swaminathan ’19, maintaining a balance between overseeing Samsara as a whole and focusing on her own acts was the aspect of the show that took the most effort.

“Since I was involved in both the logistics of putting on the whole show as well as in coordinating several dances, juggling the needs of my individual acts and the show at large was occasionally challenging,” Swaminathan explained. “It was a constant back and forth between making sure my dances were show ready and stepping back to look at the big picture beyond the acts I was in.”

Despite these challenges, Shakti members were united in the sentiment that their months of hard work were worth the satisfaction of a successful show. 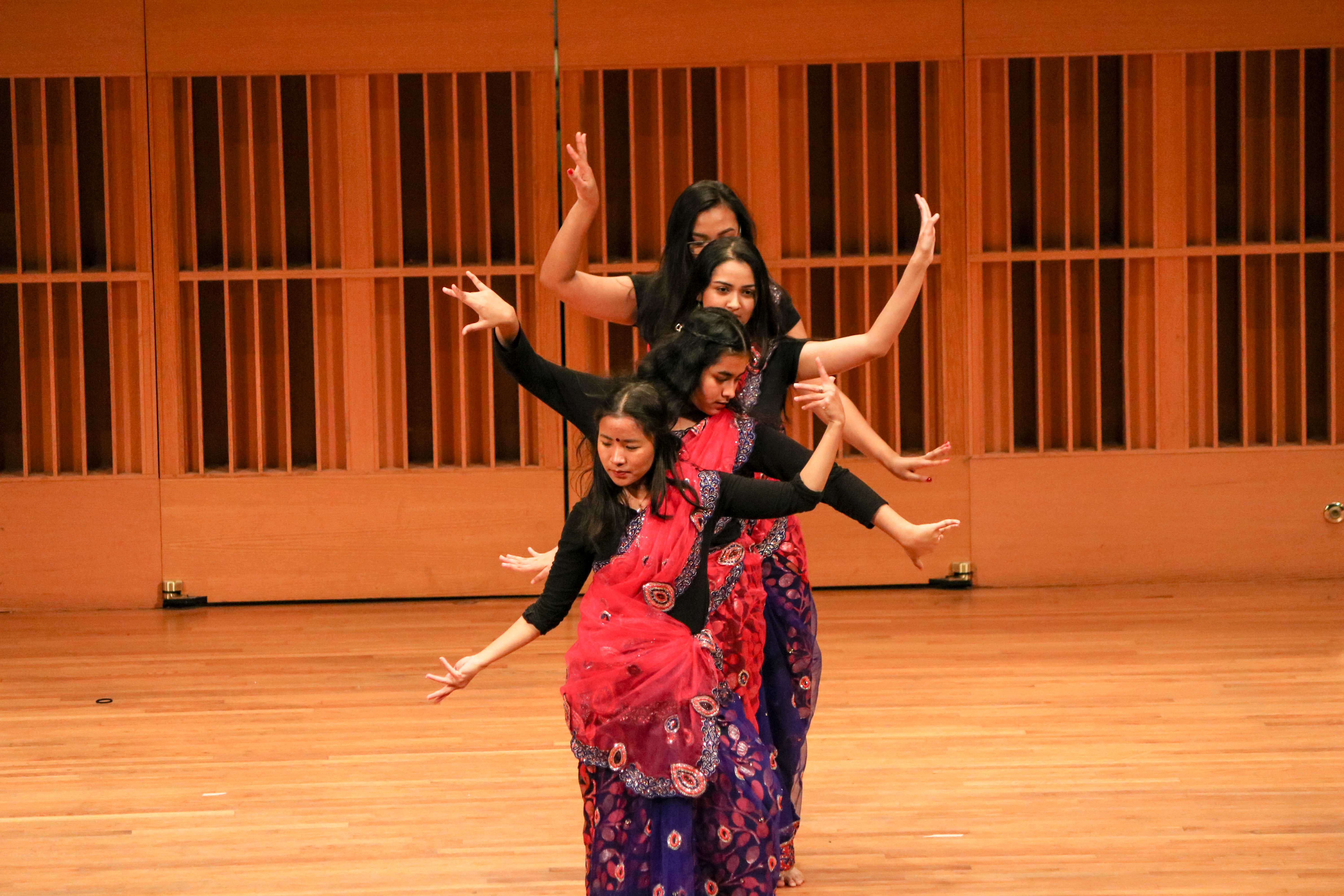 “The time commitment is sometimes a struggle, especially the week leading up to Samsara,” Nayar said. “But actually the homesickness I feel in the days after Samsara is even harder.”

Other students emphasized the group bonding that occurs as a result of Samsara.

“My favorite part of Samsara is watching the Shakti community come together in pursuit of a common goal,” Naeem explained. “We all put so much energy into the show, from each dance to each singing or spoken word performance, to the skit”

“I think Samsara is the event on campus for Shakti that really brings our group together,” Khanna added. “We are also able to make and foster individual relationships with each other, which makes the event truly what it is.”

Aside from the many ways it benefits members of Shakti, Samsara also plays a role in educating the general student population, showcasing the vibrancy and diversity of South Asian culture to people who might not otherwise seek out those types of art.

“Samsara also allows us to engage with the wider Wesleyan community and allows us to expose the rest of the community to South Asian culture,” Naeem said. “It serves as a reminder to the rest of the student body that identity groups on campus are not separate or different from anyone else. Students involved in SOC groups are our fellow students. As Wesleyan students, it is our responsibility to support our fellow students from all different groups across campus. Samsara, along with other student showcases, allow the community to show their support in a fun way.”

“Samsara is incredibly important because it is one of the few times a year Shakti can reach the wider campus community,” Swaminathan agreed. “Unfortunately, most events hosted by student groups of color are only attended by members of that particular identity group or other students of color. Because Samsara has a large cast and is performance based, we are lucky to attract an audience that is more representative of the campus community. This way, Shakti isn’t just preaching to the choir, but we are able to use Samsara as a platform to speak to all of Wesleyan. Shakti’s mission is primarily to create an inclusive and diverse space on campus that critically engages with South Asian identity.… This year, diversity within South Asia and resisting outsider stereotypes were some of our major themes, and we were able to use the acts and skits to examine how spaces like Shakti both serve and sometimes inhibit diversity of identity.”

Despite being one of the most widely publicized and attended events hosted by Shakti, Samsara is far from the only interaction the organization has with the rest of the student body. Shakti also organizes a wide variety of fundraisers, panels, and smaller cultural events throughout the year, and Naeem was quick to point out that Samsara is just one small part of the organization’s role on campus. 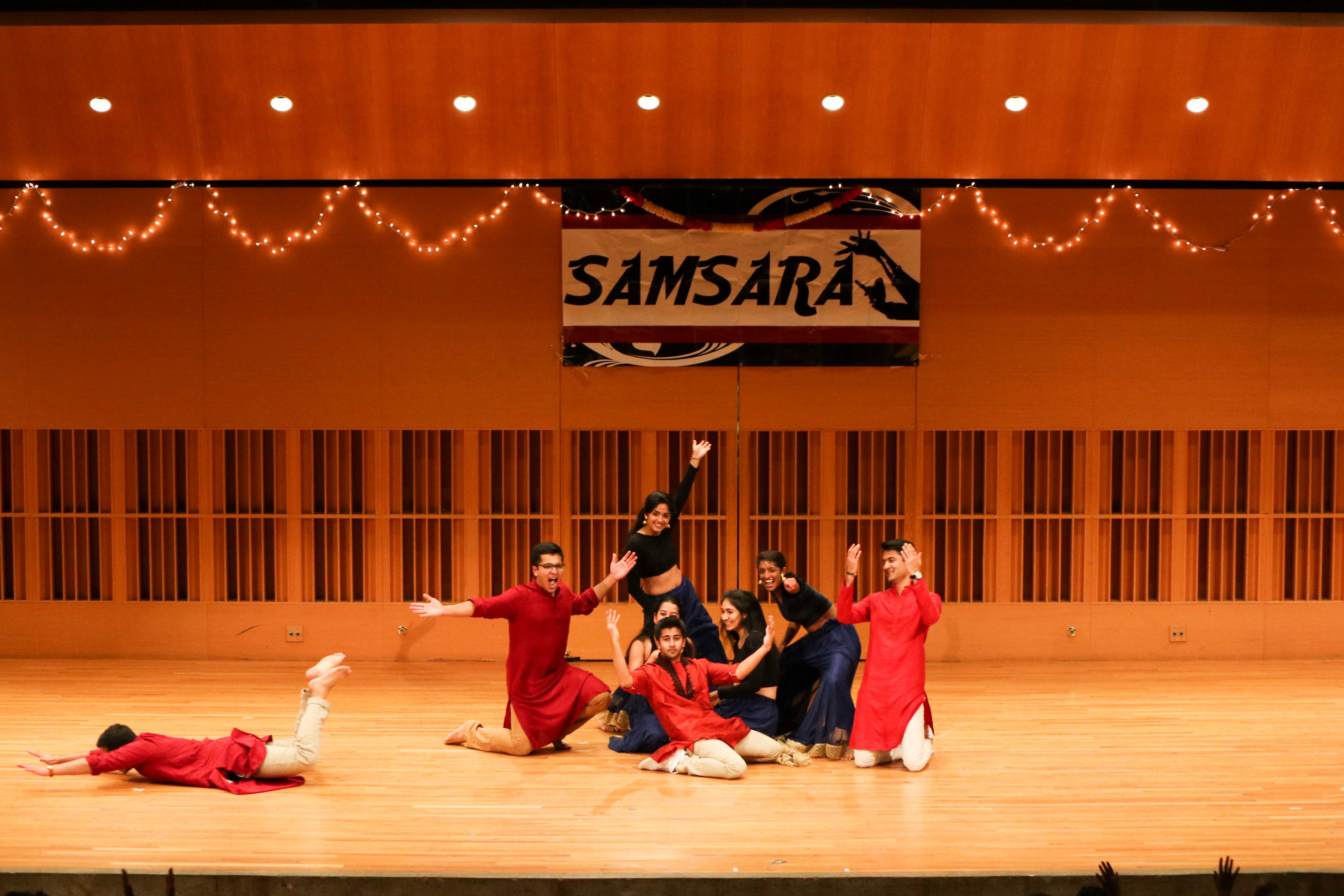 “I do want to emphasize that Samsara is only one part of our overall mission,” Naeem said. “The other main part of our mission is to engage with the community in more of a discussion-based setting. Samsara is incredibly fun, but Shakti is not all about necessarily displaying our culture to the rest of campus. Samsara is for us; the discussions and panels that we host are for the rest of the community…. We encourage the rest of the campus community to come to our discussions and dinners in order to critically engage with the South Asian identity, to understand the issues and social trends that are affecting South Asians across the world right now. This is why we work extensively with the MSA [Muslim Student Association], the Resource Center, the CFA [Center for the Arts], and various other departments to hold panels and discussions where we can all come together, have dinner and enjoy a conversation. At the end of the day, those parts of our mission will have an impact in a way that Samsara might not always have, and vice versa.”