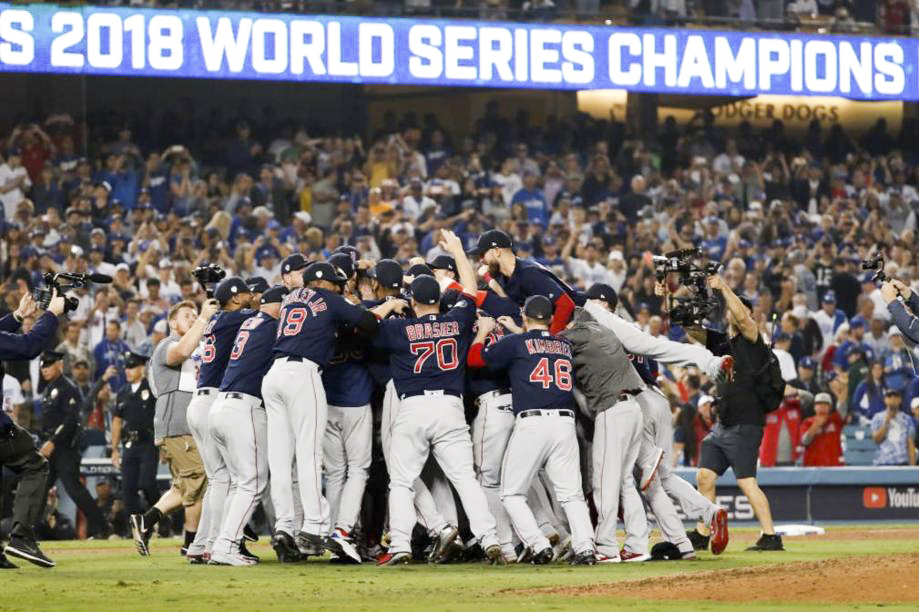 The damage has been done. After an MLB-best 108 wins in the regular season, the Boston Red Sox ripped through the postseason before defeating the Los Angeles Dodgers in five games to win their ninth World Series title in franchise history. After an 86-year drought between 1918 and 2004, Boston has now won four titles in the last 15 years.

Throughout the regular season, the Red Sox were the obvious frontrunner to represent the American League in the 114th World Series. Led by offseason addition J.D. Martinez and American League MVP favorite Mookie Betts, Boston led the league in nearly every offensive statistical category. In the postseason, the Red Sox offense continued to produce at a high level, even with Betts struggling at times. Eduardo Núñez, Christian Vázquez, and Ian Kinsler each outperformed expectations with their timely work at the plate, but by far the biggest offensive surprise of the postseason for the Red Sox was first baseman Steve Pearce. A trade deadline acquisition from the Toronto Blue Jays, Pearce hit three home runs in five World Series games and went on to win World Series MVP. Outfielder Jackie Bradley Jr. also had an exceptionally strong postseason, winning American League Championship Series (ALCS) MVP.

Although Pearce and Bradley both helped Boston through a postseason in which they only lost three total games, the best individual story of the postseason belongs to pitcher David Price. Entering the playoffs, Price was 0-8 in nine career postseason starts and had a reputation as a playoff choke artist. However, after an abysmal start against the New York Yankees, Price finished an out away from picking up a victory in Game 2 of the ALCS before winning his next 3 games. Price permanently buried his less-than-stellar playoff history with seven innings of one-run baseball, clinching the World Series for the Red Sox and more than earning the seven-year, $217 million contract he signed with Boston in 2015.

What makes the playoff dominance exhibited by the Red Sox this year even more remarkable is the quality of opponents they had to face. The Sox faced off against their 100-win rival, the New York Yankees, in the American League Divisional Series, which constituted their first playoff meeting since Boston’s famous ALCS comeback in 2004. Boston narrowly won in Games 1 and 4, lost in Game 2, and demolished the Yankees in Game 3 en route to the ALCS. Along the way, utility player Brock Holt hit for the first cycle (a single, double, triple, and home run) in postseason history.

Although Boston had the best record in the majors, the 103-win Houston Astros still appeared to be a formidable opponent. The only team comparable with the Red Sox in raw talent, Houston possessed a quartet of All-Star pitchers led by Justin Verlander, as well as elite position players such as 2017 American League MVP José Altuve, Alex Bregman, Carlos Correa, and George Springer. Boston again won in five games. One notable moment was a questionable fan interference call in Game 4: trying to rob Altuve of a surefire home run, Betts reached into the stands only to have a fan nudge his glove. Although the fan definitely made contact with Betts, interference only applies when a player was interfered with in the field of play. The existing video angles couldn’t provide a direct view of the play, so the call stood after video review.

In the World Series, the Red Sox simply looked like the better team. Boston consistently came up with timely hits and outs to again win in five games. Cora deserves major credit for his managerial performance in Game 4. After a seven-hour, 18 inning Game 3, the Red Sox lost off a Max Muncy walk-off home run, Cora was able to keep the team’s spirits up and managed them to wins in the following two games.

The Red Sox don’t face many major decisions in the offseason. They’ve already picked up Chris Sale’s team option, and Price opted into his player option for the next four years of his contract. The Sox may be in danger of losing closer Craig Kimbrel, but Kimbrel struggled in the playoffs, and Boston was able to win in spite of him. Their priority should be locking up young talent such as Betts and Xander Bogaerts to lucrative extensions. The Dodgers, on the other hand, will likely lose All-Star Manny Machado to free agency and are in danger of losing future Hall of Fame pitcher Clayton Kershaw as well. After an entertaining run, it looks like the Sox are best positioned to succeed for years to come.