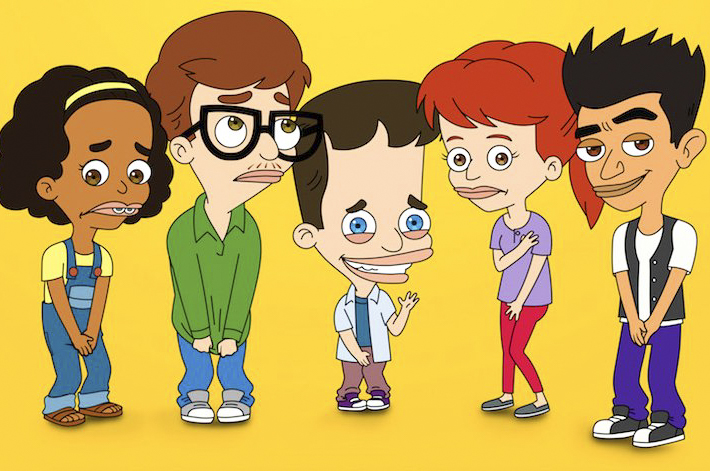 Although the parents on review website CommonSenseMedia.org are highly divided about how age-appropriate the cartoon is for their children, college students should have no trouble taking pleasure in the second season of “Big Mouth,” which premiered on Netflix on Oct. 5. Taking a walk down memory lane to the depraved caves of puberty may reopen some still-too-fresh wounds at this age, but the rewards of the journey far outweigh the risks.

The Netflix cartoon’s cast is so star-studded it verges on bedazzled. Creators Nick Kroll, Andrew Goldberg, Mark Levin, and Jennifer Flackett concocted a winning combination with successful stand-up comic and failed sitcom actor John Mulaney, Jordan Peele of “Key & Peele” fame, “SNL” icons Maya Rudolph and Fred Armisen, hilarious actress (who stole the show in every “Parks & Recreation” episode that she was in, in addition to playing the lead in perhaps the finest rom-com of all time, “Obvious Child,”) Jenny Slate, “Jane the Virgin’s” effervescent Gina Rodriguez, “Brooklyn Nine-Nine’s” deeply unsettling Jason Mantzoukas, guest star Kenneth from “30 Rock” Jack McBrayer, and youngest sibling Kroll. Together, the group takes on roles that range from a weakly mustached boy to a single pube.

The second season has far less to introduce its audience to, so although it may feel less jaw-droppingly innovative than the first 10 episodes, it can delve more significantly into a range of themes. This time around, everybody knows about the Hormone Monsters/Monstresses (hairy and impulsive bipeds who personify puberty, visible only by those going through it) and that genitals are likely to talk at any given time, although it’s impossible to pretend that the first season gave viewers much time to adjust to the premise either.

On Oct. 5, Netflix delivered the gift of 10 more episodes in which the show’s familiar characters continue their haphazard journeys through the seventh grade. Nick (Kroll) struggles with his comparatively slow physical development and relishes in his budding relationship. Andrew (Mulaney) confronts humiliation, mortification, and not his father. Jay (Mantzoukas) navigates his potential bisexuality and an upsetting family dynamic. Jessi (Klein) acts out in response to her parents’ divorce and the internal turmoil that already comes with coming of age. Missy (Slate) wrestles with accepting her own body as she explores her sensuality. The audience also has the genuine pleasure of meeting Gina (Rodriguez), whose body may be developed beyond many of her peers’ but whose spirit is just as insecure about the changes as the rest of her classmates.

Gina’s character may cause some early concerns for viewers who have seen schoolgirls hypersexualized a few too many times onscreen, particularly when her initial purpose seems to be only to serve as a love interest for Nick. Although the introduction to her character—during which the show’s male protagonists chant “boobs” as this presumably 13-year-old girl unzips her jacket on the soccer field—leaves much to be desired, the audience is soon shown the scene from Gina’s perspective to remind many viewers that harmful perversion done in a funny way is still perversion—a lesson that the show itself sometimes forgets.

Also, through its personification, shame can finally be addressed head-on by the show instead of serving as an abstract concept that main Hormone Monster Maury (Kroll) fights against through every shameless instinct that he urges his protégée Andrew to indulge in. Now, the audience sees the gloomy figure for what he is: attention-seeking and persistent.

The season’s final episode subtly introduces an uncharacteristically dark theme: shame never leaves. After the seventh graders realize that they’ve all been seeing the same Shame Wizard, and he’s been making each of them miserable, they band together to banish him from the school sleepover in the gym. (The ensuing shenanigans play out over Earth, Wind, and Fire’s “September,” quickly followed by a melancholy indie cover of the same track, as the show shifts from reveling in a shameless world to sinking into its less potentially pleasant reality. It’s a work of art.) Andrew, however, quickly rediscovers the Wizard hovering like the world’s most unpleasant helicopter parent, as if to say: “You can send shame away, you can think it’s gone, but it always lurks like a weird, lonely magician.”

With the introduction of Shame Incarnate comes its rejection, which returns to the show’s fundamental lesson of self-acceptance. In the penultimate episode, Lola (Kroll) comforts Gina, who has been slut-shamed by the school.

The sweet moment manages not to be overshadowed by its follow-up punchline (about feeding said mean jerks into a wood chipper and spreading their body chunks out on the playground), exemplifying the fine line that “Big Mouth” walks in each of its episodes, and mostly succeeds in keeping its balance on.

The cartoon’s chief problem emerges when the show falls off of that line and into a weird safety net of uncontrolled hormones littered with stray pubes. Particularly in both season finales, the challenging mix of the fundamentally ridiculous personified hormone monsters with the unparalleled realism of the teenagers’ evolving selves deteriorates past the point of believability. However, as Albert Camus—or Neil Gaiman, depending on who you ask—said, “Fiction is the lie through which we tell the truth,” and suspension of disbelief is a small price to pay for “Big Mouth’s” affirming messages.

For the show’s presumably adult audience, it seems that the show could have delved further into the question of exactly how perverted everyone’s “allowed” to be. But here, audience members get to see the message that is distinctly meant for those going through puberty, and those who have not yet recovered from its scars. The cartoon does not attempt to instruct its viewers about exactly how they—or their pubescent selves—are or were meant to feel about shame. Instead, it finds itself as an oddly optimistic voice for a “warts and all” mentality and preaches about co-existence without being too preachy.