In “They, Themself and Schmerm,” Comedian Becca Blackwell Pushes Discomfort Into Vulnerability 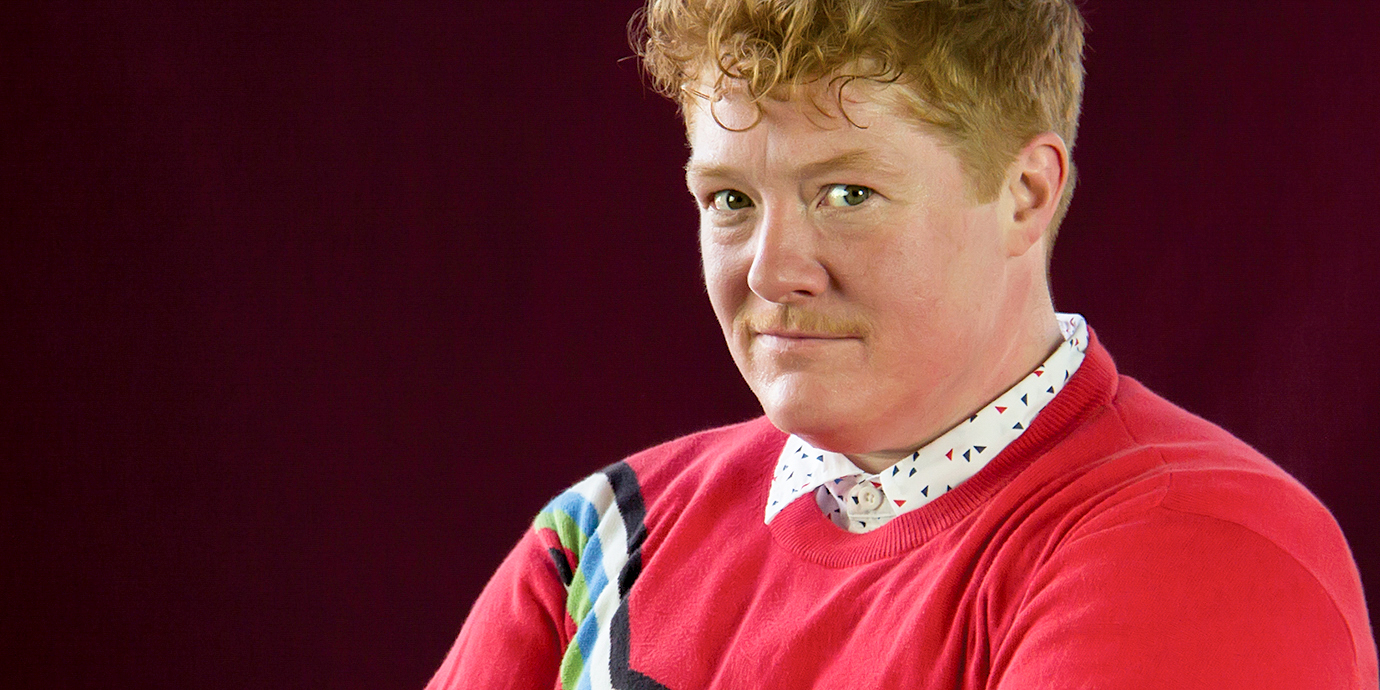 The first few minutes of “They, Themself and Schmerm,” a comedy show performed at the University’s World Music Hall last Friday, are a master class in forcing an audience to grapple with their own discomfort.

“Ladies and gentleman and the rest of us, welcome Becca Blackwell,” announces a booming voice.

A giant sign reading “Trigger Warning” in big black letters is carried across the stage. Blackwell, a trans actor who prefers “they/them” pronouns, confidently struts onstage, donning a mustache and a shirt emblazoned with the words “Daddy Problems” and a pair of handcuffs. They begin snapping and dancing like a Jet out of “West Side Story.”

“I was molested!” Blackwell says, staring into the audience with a sly smile. “But who wasn’t in the ’70s!”

After a short moment of silence, Blackwell broke the act and spoke candidly to the audience.

“Wouldn’t it be awful if I did the whole show like that?” they asked, immediately diffusing the tension in the room. Staring at the group of college kids assembled in World Musical Hall at 10 p.m., they ask with both a sense of irony and sincerity, “Is anyone drunk?”

Within three minutes, Blackwell forces the audience both to feel discomfort and to radically dismantle it at the same time. Members of the audience, myself included, laugh not at the joke Blackwell told but rather out of complete shock at what is happening before us. Laughter is a last resort, a nervous tick, a gut reaction to someone doing something we didn’t understand. Even when shifting gears to tell purely funny stories, in “They, Themself and Schmerm,” Blackwell never loses sight of the laughter that stems from our discomfort about their own presence, or even existence. However, Blackwell doesn’t chastise us for this discomfort but instead forces us to laugh at it, feel it, and interrogate it.

This use of discomfort should not distract from the fact that Blackwell’s performance is also a hilarious piece of comedy. Comprised primarily of true stories from their own life, Blackwell is incredibly skilled at telling personal stories that connect to broader ideas about gender, sexuality, and society.

“I’ve gotten a lot of mileage with a mustache and a pussy,” Blackwell says, describing with glee their identification as a bull dyke for most of their life.

At one point, Blackwell recounts a story about being misgendered while walking into an elevator. Instead of recalling the experience of being called a lady with irritation, Blackwell delights in the fact that a person with a mustache could even be considered a woman.

“This is what a lady can look like!” Blackwell exclaims, pointing to their body.

The audience, in turn, erupts in laughter. This response stems not from a desire to ridicule Blackwell’s body but from the joy of realizing that the way in which society attempts to label and gender appearance is inherently ridiculous.

Throughout the show, these personal memories become ways in which Blackwell can take uncomfortable and possibly even deeply upsetting memories and utilize them to craft stories that are exciting, fun, and fascinating for the audience. When Blackwell discusses times they have had to use the women’s or men’s bathroom depending on the setting, they can remark not only on how people of different genders react to the presence of a trans person, but also simply on how men and women “piss differently.”

Observational comedy about gender has long been a standard part of comedy. Jokes about different ways men and women stereotypically behave induce a sense of recognition for the audience while also reinforcing gender roles, especially when the joke is told by a cisgender man. But Blackwell is a person who exists between the binary genders and has personally identified as both a man and a woman alongside society’s own labeling of their gender. When Blackwell tells these jokes, even if they have a traditional structure, they don’t come off as someone essentializing gender from an outside perspective; they come from someone who has lived through these experiences, and the joke lands even harder as a result.

Seeing Blackwell fully own their identity onstage and use it to subvert traditional comedy and understandings of gender is a liberating experience. Watching a trans person describe their vagina by hunching over and making an absurd sound isn’t an overtly political statement but instead just a person sharing a part of themself. Blackwell’s comedy doesn’t seek to patronizingly educate so much as to empathize with specific experiences. Halfway through the show Blackwell added the disclaimer that not all trans people speak in the brash, unapologetic way that they do and that this is instead just their story.

“I’m not speaking on behalf of the trans community.” Blackwell says. “I’m not even a speaker on behalf of redheads.”

While there is radical joy to Blackwell’s reclamation of the traumatic experiences they’ve gone through simply by being themself, Blackwell doesn’t lose sight of both the pain driving them to tell these stories and the discomfort that the audience feels hearing them. Although “They, Themself and Schmerm” first debuted in 2014, it seems to be in conversation with another LGBTQ comedian’s work, Hannah Gadsby’s Netflix special “Nanette,” which explores the limitations of laughing at trauma.

“Do you understand what self-deprecation means when it comes from somebody who already exists in the margins?” Gadsby asks. “It’s not humility, it’s humiliation.”

Blackwell intersperses their hilarious, if humiliating, stories with brief mentions of traumatic experiences: multiple molestations, a suicide attempt at the age of 13, and addiction to drugs and alcohol. While these serve as jolts meant to shock the audience, one might initially assume that they underscore comedy’s limitation to meaningfully grapple with trauma. Why does Blackwell bring up these experiences if only to briefly laugh at them and not to give the audience a tear-jerking exploration of their power?

In the back half of the show, it becomes clear that Blackwell is using comedy not to avoid traumatic experiences but rather to demystify and contextualize them. Molestation, suicide, and addiction are powerful forces, but they are also just the facts of life for Blackwell’s experience. While Blackwell has incredible skill with language and storytelling, their most powerful tool is silence. In the first few minutes of the show when Blackwell states that they were molested, the audience has been trained by society to expect some kind of re-creation of this trauma. One only has to look at Christine Blasey Ford’s testimony about being sexually assaulted by Brett Kavanaugh to understand that there’s a theatrical and voyeuristic desire to see trauma represented in front of an audience, even when the narratives are being reclaimed by those affected by the trauma. Blackwell refuses to give the audience that invasive satisfaction, withholding the resolution to our discomfort, just as that resolution has been withheld in their own life.

Silence and comedy combine most meaningfully when Blackwell strips away any artifice between them and the audience, creating a real emotional connection when pain becomes so visceral that it can no longer be laughed at.

Raising the house lights, Blackwell moves into the audience and asks who is a “baby man,” asking with their consent if they can sit on their lap. Yes, it was comedic, discomforting, and strange to see a comedian engage so closely with an audience member. But laughter faded away into a moment of profound intimacy, Blackwell pushing the audience to be open themselves up to vulnerability in the way they had been doing for the past hour. Together, Blackwell and the audience member sit together, silently staring into each other’s eyes. In that moment, Blackwell’s ability as a performer becomes incredibly clear. Blackwell can use comedy as a tool to push our understanding of them and of ourselves, but they also understand when comedy has created a vulnerable space in which it is no longer necessary to laugh. If the show started out with comedy as a resolution to our discomfort, Blackwell has pushed us at the end of their show to understand that our discomfort is our resolution.