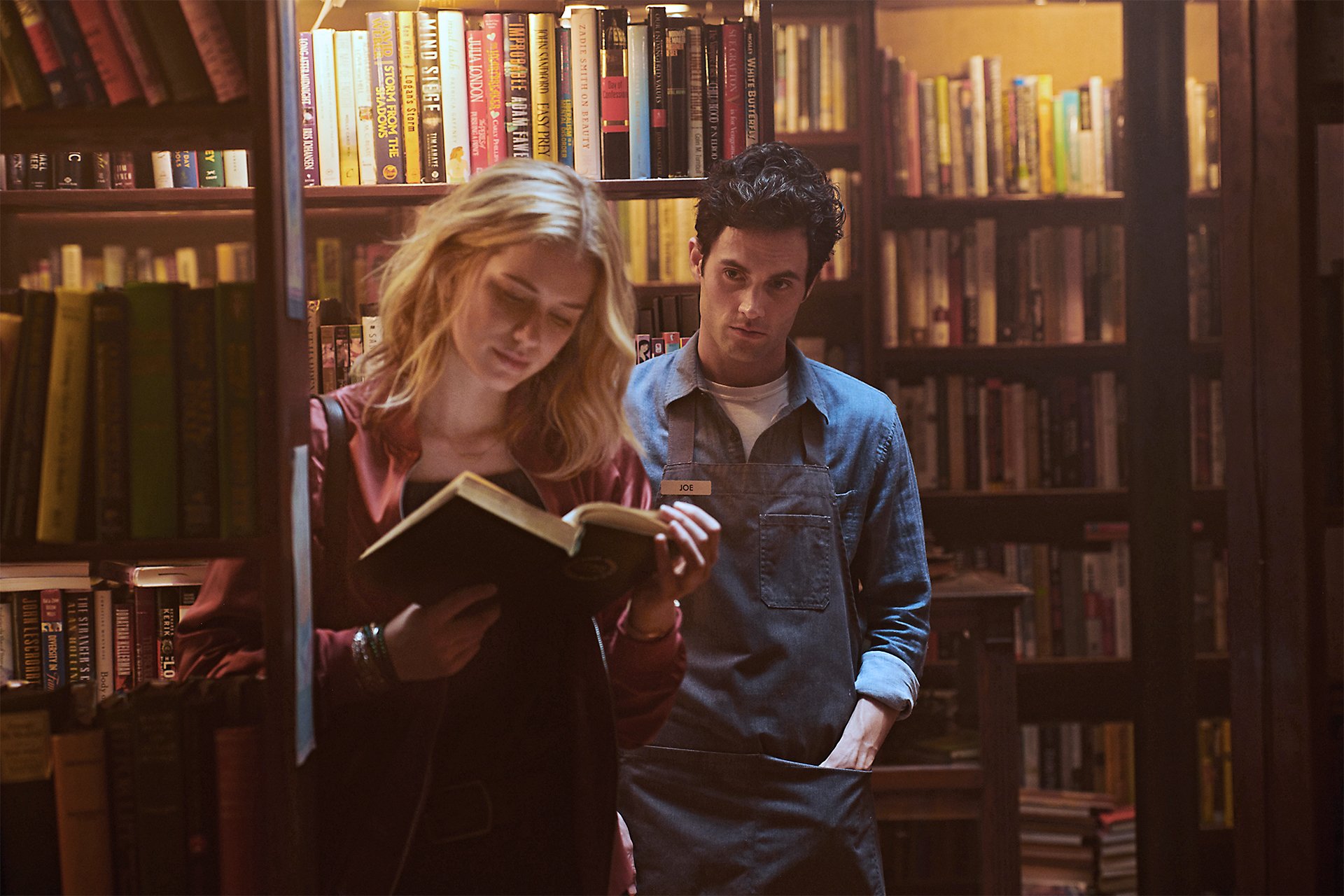 This cross-talk contains major spoilers for the pilot episode of “You” (just watch it, you won’t regret it).

Meg Cummings ’20: This is Meg and Tara cross-talking “You,” the best show ever made.

MC: So just to recap, “You” is a show on Lifetime based on a book of the same name in which a bookstore attendant named Joe—played by none other than Penn Badgley of “Gossip Girl” fame—meets a girl (Guinevere Beck, played by Elizabeth Lail) in the bookstore and then proceeds to stalk her to the ends of the earth, all while delivering perhaps the best monologue in the history of television. So Tara, what are your first thoughts?

TJ: My first thoughts? Well a lot of things happened, but I feel like my first impression is that Penn Badgley can only play one character, which is a sociopathic softboy from Brooklyn—I guess he’s not from Brooklyn in this show—but I mean he’s literally just the same person he was on “Gossip Girl.” He has the same mannerisms and also the same clothing as Dan Humphrey, which is a lot.

MC: It’s really similar. I, of course, despise the character of Dan Humphrey. But I did think that Penn Badgley played [Joe] very well and especially was really good at the more comedic moments. And I also think he’s able to lean into the more ridiculous notes of the monologue.

TJ: It is pretty funny for a stalker show, and I feel like he has a good deadpan serial killer voice. Joe literally said the words “You just need to be saved.” That’s a direct quote from the show! Dan Humphrey was supposedly a sympathetic character but I do think that this is the monologue that was going on in his head throughout “Gossip Girl.” The only reason Badgley’s actions come across as sympathetic on “Gossip Girl” and not on “You” is that we don’t get to see inside his head on “Gossip Girl.”

MC: I have two questions for you, because I’m trying to figure it out. First of all, do you think that the character of Beck, the woman being stalked, is well-developed enough? And is the addition of Paco (Luca Padovan), the child of a broken home who is Joe’s neighbor, an effective way to humanize the character of Joe? Should we be humanizing him in that way?

TJ: Well I’m kind of interested to see where the show goes from here because I feel like first of all, Beck kind of sucks and I think they’re going to lean into that a little bit. I think that her obsession with social media is a little bit superficial, and they’re going to play that characterization up. That plus the fact that there’s this little kid in the next apartment over that Joe has a real soft spot for and keeps giving books to. I think both of those things are features that could be used to humanize Joe and justify his stalking people and bashing their heads in, and I hope that’s not what the show does.

MC: I mean obviously Penn Badgley the actor knows that Joe is a bad guy, and obviously the show also knows that, and Joe doesn’t. But I’m concerned, I don’t really want to identify too much with him.

TJ: I’m intrigued because I think the first episode did a really good job of being like “Joe is completely nuts and is victimizing this poor woman who—while naïve enough to not password protect her phone—doesn’t deserve to be stalked.” But I’m afraid that they’re going to do that weird edgy thing where they make us sympathize with the violent stalker, and I am not into that as a trope.

MC: I mean when the first episode ends with Joe kidnapping Beck’s ex (Benji, played by Lou Taylor Pucci) and imprisoning him beneath the bookstore.

TJ: That is a pretty unambiguous supervillain moment, although I will say that Benji is also kind of a douche.

TJ: So if anyone has to be locked in a murder library it should probably be him. There’s not a lot of great men on this show, except for the little kid. Also, I can’t tell if Beck is supposed to be a talented writer or not. She goes to a bar in Greenpoint to do this open mic, she gets halfway through a poem, and then she gets heckled and she’s too drunk to finish, but it’s not a great poem.

MC: Yeah, but I feel like whenever TV shows try to make good writers and then they show their writing its always bad.

TJ: That’s true. I can’t really tell if the show wants us to think she’s talented but she’s being dragged down by her socialite friends and her terrible workload, or if she’s just really pretentious and can’t do anything. I’m intrigued to see where all the characters on this show go.

MC: It’s also a good use of social media.

TJ: I do think it’s a pretty interesting and well-done commentary on social media, even though it’s unrealistic that anyone would ever be able to get into a love interest’s computer because they didn’t have a password—that part’s dumb. But the rest of it where he finds her very easily on social media, and he finds her Instagram profile, and then he uses that to find her address and then visits her address in real life, I do think that part is pretty interesting. Joe’s a pretty adept stalker but it is true that for a lot of people their personal information is just out there in a way that is pretty unique to this generation. So that did make me a little bit alarmed as someone with a public Instagram profile.

MC: Yeah, I’m going to protect my tweets about not wanting to put printing costs on my student account…So where does the show go from here? One of my housemates actually read the book, and she said that the show did a really good job of ramping up [the book’s] creepiness, and of using classic romantic tropes in a way that makes you realize that actually those are really creepy. It doesn’t quite work here because they ramped it up so quickly that now he has a captive in his basement, but they are also now going on a date, so I feel like there’s a way to deconstruct those super creepy romantic tropes while they’re dating and also he’s stalking her.

TJ: Yeah there’s the whole thing where Joe sneaks into Beck’s apartment and then she comes back before he leaves so he hides in the shower, and he calls that out as a thing that happens to guys in romantic comedies, so he thinks it’s a fun romantic comedy moment, but because of his added internal monologue it’s so unambiguously terrifying and weird. So I think that the show does a good job of lampshading that kind of thing.

MC: Is this show good? That’s my main question. Is it actually good or do I just enjoy it because I love camp?

TJ: I honestly don’t know. I read a lot of reviews of “You” before I watched and I felt like I was getting really mixed signals where everything they were describing was objectively ridiculous and belonged to a terrible show but all the reviews were really positive. They were all saying like “this is a great exploration of modern romance and social media” and now I kind of understand that because it was a pretty intelligent show but also completely bananas.

MC: It’s very watchable, although I am watching it week by week and I don’t think that I could watch it all at once, that just seems like an overload. I don’t think I would be able to digest it.

TJ: I thought this was a good pilot, but there’s so much happening that it’s very possible that by the end of the season it’s just a mess, so I’m intrigued to see where it goes from here. I’m intrigued to see where Joe’s characterization goes because I’m wondering if they’re going to make him more or less sympathetic. He can’t really get less sympathetic.

MC: It’s going to be terrifyingly nail-biting to watch his seemingly normal interactions with Beck while knowing that he has stolen her phone and broken into her computer and jerked off in her bushes without her knowing.

MC: At a certain point Beck has to find out what he’s doing and reject him, and then he’ll react with violence. That seems to me to be the way it will go.

TJ: Honestly the thing that I feel like is kind of interesting about the show—even though I’m sure at some point everything he does is going to come into the light and that will be the climax—is that a lot of the things he does are things that he could very easily never be caught for. He finds her Twitter and Instagram and uses that to find her address and then to visit that address. And they’re also things—maybe not the going to her house—that people definitely do to their love interests or even just people they’re curious about. Who among us hasn’t looked up a virtual stranger on Facebook? And we all just don’t talk about it but it’s a little weird when you think about from the context of this complete nutcase who’s using the power of the internet for evil.

MC: It’s definitely a cautionary tale. Please put your Instagram on private and get curtains for your first floor windows!

Meg Cummings can be reached at mcummings@wesleyan.edu