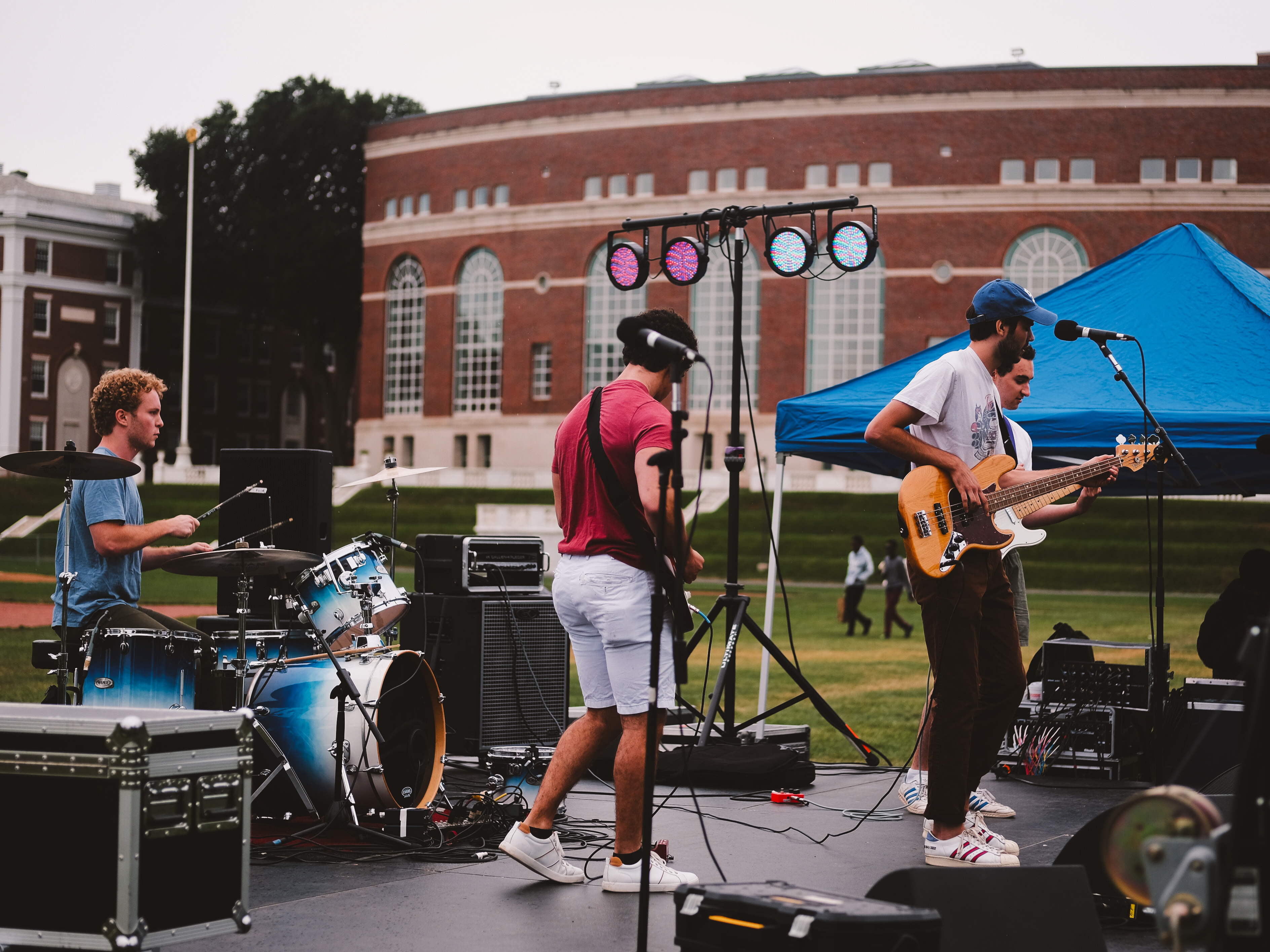 In spite of President Roth’s absence and light drizzle this past Saturday, performers and audience members weren’t deterred from having a great time at the University’s seventh annual MASH festival. With three different stages—on Foss Hill, in front of Olin Memorial Library, and on the North College Lawn—plus a late-night DJ showcase in Beckham Hall, the MASH featured student performers both experienced and brand new.

Quietly, though, this year’s event marked the first MASH since its 2012 inception in which Roth and his professor band, the Smokin’ Lillies, did not perform. Though the MASH has frequently featured faculty bands over the years, non-students were consigned to a spectator role for 2018’s event.

One student with plenty of prior MASH experience is performer-turned-Festival Intern Matthew Forker ’19, the student responsible for much of the festival’s behind-the-scenes logistics. Forker spoke to The Argus about his decision to get involved as an intern this year.

“So, I performed at The MASH my sophomore and junior year,” Forker said. “And I wasn’t going to be able to perform this year because my band graduated…. I work with the CFA [Center for the Arts] a lot, I do sound for Crowell, I’ve worked in the music department, so I know Hanna [Oravec, the CFA Assistant Director and MASH Producer]…. She sent out a job posting in the spring last year for an intern, and I applied because I thought it would be fun.”

Not all of the students involved with The MASH have as much experience as Forker; many performers were playing at the festival for the first time, and for a few brave first-year students, The MASH was actually their first time onstage at Wesleyan. One such student was Jack Canavan-Gosselin ’22, who opened on the Olin Stage, performing covers of a variety of different music on the piano and trombone.

“This was my first performance experience at Wes,” Canavan-Gosselin wrote in an email to The Argus. “I heard about the MASH through WesAdmits 2022 over the summer, applied to perform, and got a spot a few days before arriving. It sounded like an awesome experience, and it absolutely was.”

Canavan-Gosselin also discussed his musical background and hopes for the rest of his musical career at Wesleyan.

“I have been playing piano for 13 years now, ever since…I was in kindergarten,” he said. “In fourth grade band, I also started to play the trombone, which I have stuck with since. I spend a lot of my time practicing and playing music, and will definitely continue that at Wes! I’m already involved with a cappella, the jazz ensemble, and the orchestra, and hope to further expand my musical horizons during my time here.”

Following Canavan-Gosselin on the Olin stage was Myles Johnson ’22, another first-year performer, who hopped confidently on stage with a humble and sweet presence. Equipped with only an acoustic guitar and a loop pedal, he sang charming covers in a deep, melodic voice. His covers included songs by Harry Styles and Daniel Caesar, crafting an acoustic-pop performance that sounded record-deal ready.

An early highlight on the North College stage was Elias Normal, the stage name of musician and producer Matt Rubenstein ’21, whose rhythmic tracks spanned a variety of genres. Rubenstein explained his musical influences and background to The Argus. 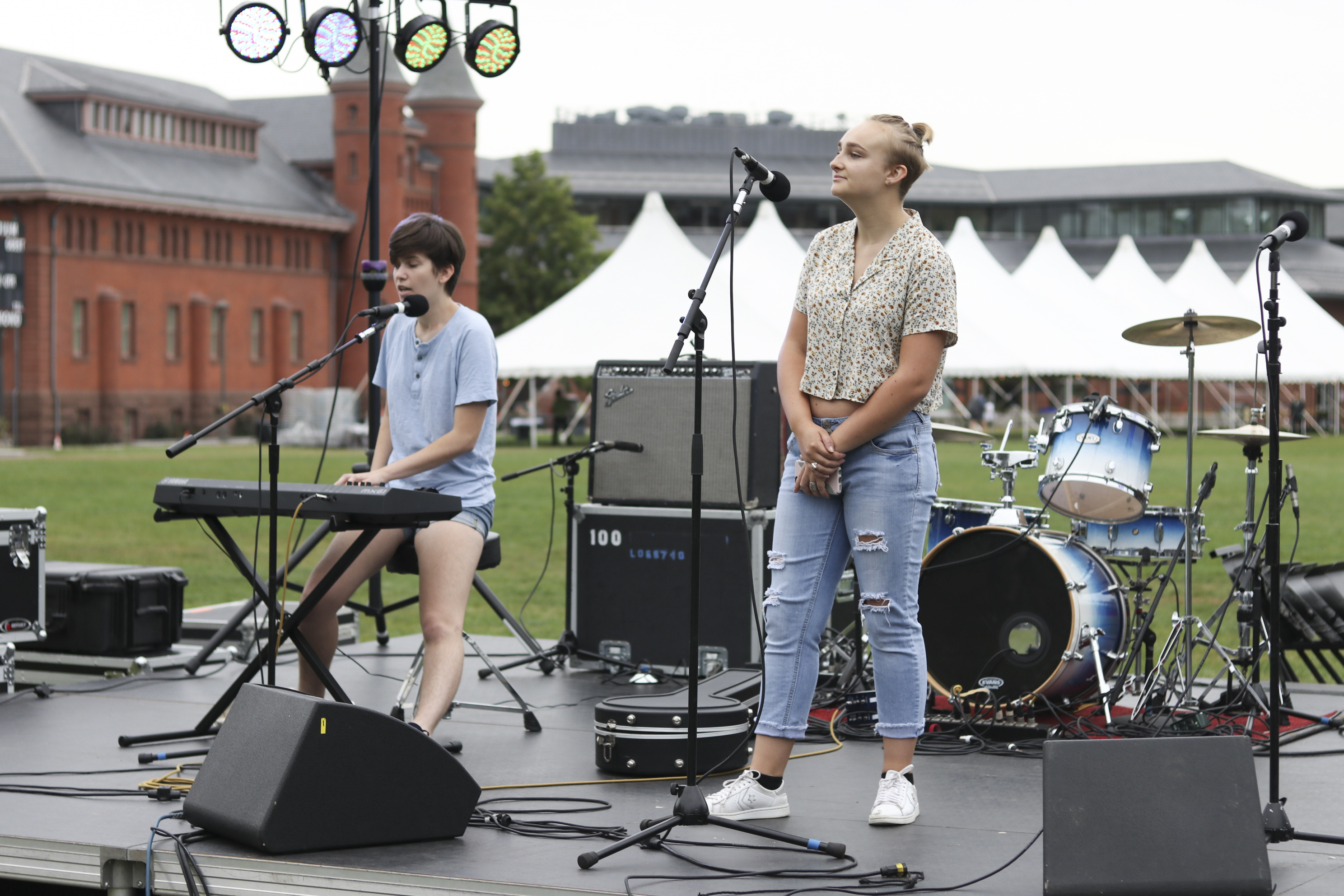 “I’ve been playing piano since I was six, but I didn’t write original music until about seventh grade,” Rubenstein said. “I dipped my toe into digital music production the summer before my senior year of high school. Now, with all the liberty digital production gives me, I try to do a lot of stuff and draw from a lot of influences. I get very inspired by Kanye West, Justin Vernon, Pink Floyd, Janelle Monae, Prince, David Bowie, FKA Twigs and a bunch of other stuff…. My music is a little all over the place. If I had to summarize, I’d say it’s rock-informed synth pop with some hip-hop production sensibilities.”

Meanwhile, on the Foss Hill stage, Beach Juice—composed of Brooke Kushwaha ’20, May Klug ’19, Isaac Price-Slade ’19, and Declan Moy Bishow ’19—charmed audience members with their catchy, snarky pop songs addressing topics ranging from horse girls to dudes who won’t stop trying to make small talk at parties. A particular standout was “Elon Musk,” a song about the infamous multibillionaire, which can be found on SoundCloud and will probably be the best song featuring extensive quotes from an Azealia Banks Instagram story that you’ll hear all week.

The a cappella group Slavei represented the diversity of Wesleyan’s musical scene well. While a cappella groups aren’t difficult to come by on most any college campus, one performing completely in Slavic languages is excitingly rare. A personable group of talented singers, they explained the funny stories behind their traditional Slavic songs. They performed both hauntingly beautiful harmonies and cheerful dancing tunes, and even retook the stage for an encore at the end of their set.

The final performance of the evening on the Foss stage was from FieldFare—consisting of Daphne Gampel ’19, Becket Cerny ’19, Ian Jacobson ’21 and Jenni Rudolph—a group that, despite the extensive musical experience of its members, was formed extremely recently.

“Daphne and I met freshman year and have worked together on lots of different projects over the four years,” Cerny told The Argus. “But this group met a lot more recently.”

“Yeah, we actually all played for the first time together 24 hours before the show because Jenni goes to Berklee in Boston,” Gampel explained. “Becket knew Ian because they’d played some shows together in high school, and I met Jenni this past summer at a songwriting fellowship in Chicago. Becket and I had a good feeling about the combo of players, and we’re really happy with how it worked out.”

Cerny and Gampel also discussed FieldFare’s musical style and the way the different band members’ strengths play off each other. 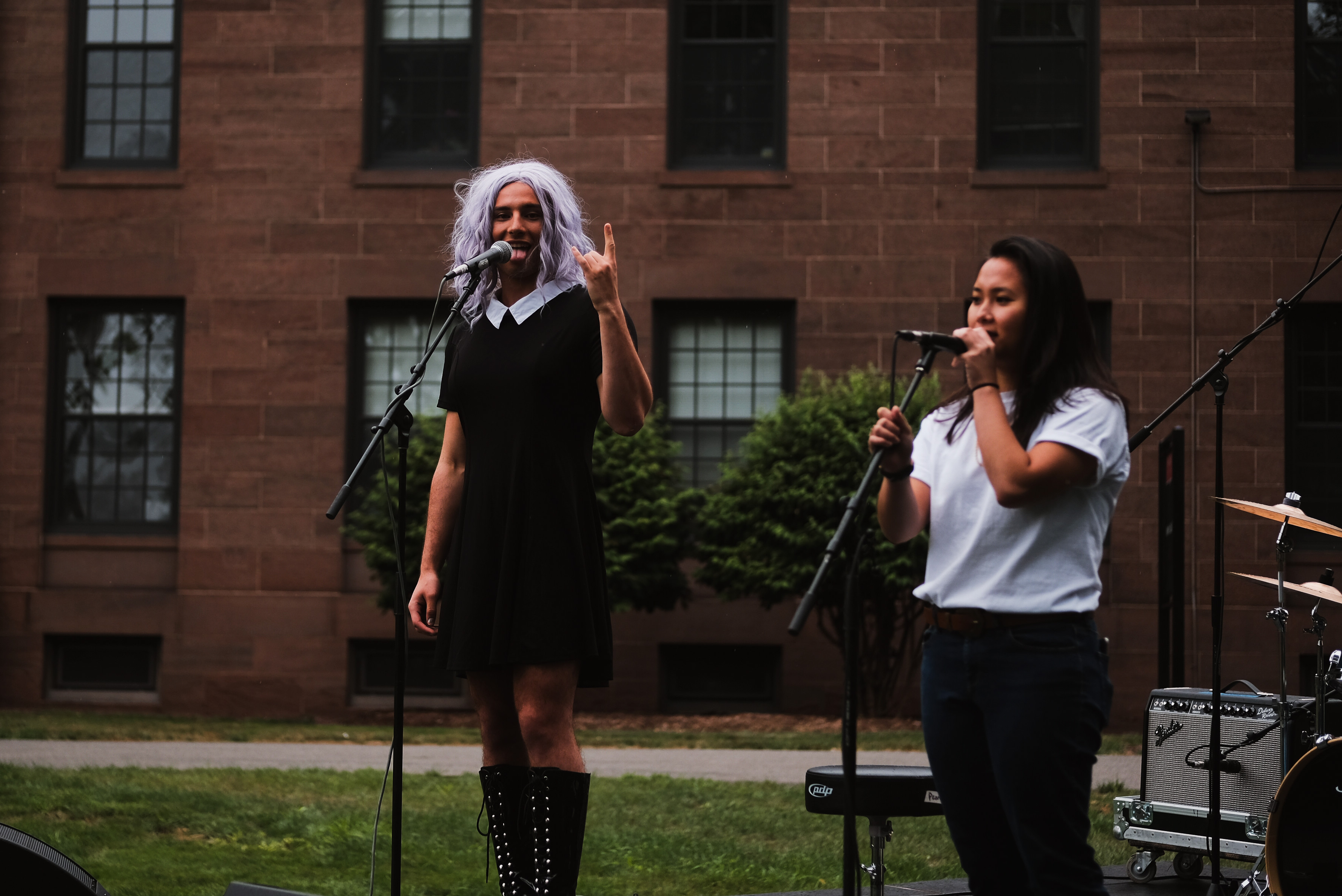 “In terms of style, we all focus on different areas individually, but we definitely drew a lot from pocket-driven pop and soul to put these songs together,” Cerny said. “Daph and Jenni are really great songwriters who cover a lot of bases, so we kinda tackle each tune as it comes, some calling for more of one quality, some more of another. I’d say right now we’re trying to get inside pop music and figure it out.”

“What’s super cool is we have these different individual relationships with each other working on particular musical ideas, like how to groove really hard or how to write compelling lyrics and great changes,” Gampel added. “So those ideas come together in great and different ways depending on what we’re about to play.”

Alongside the scheduled performers, audience members who felt so inspired were also given the chance to actively participate in The MASH through two open mics on the Olin stage, as well as a cypher that took place on the North College stage. This year’s MASH also featured the new addition of a late night stage in Beckham Hall, which showcased the work of student DJs.

“That was new,” Forker said of the decision to add a late night stage. “We wanted to try to bring in some different types of music since it’s been very rock-centric for the past couple years, and we thought that a good way to do that was to have it in Beckham. And also we wanted to try out having The MASH go later.”

Overall, the one constant feature of the festival’s many performers was their wide range of skills and musical styles.

“The Wesleyan music scene is surprising,” Forker said. “That’s one of my favorite things about it. What I mean by that is that everything and anything is happening here. So if we wanted to have a DJ stage we could have that, and we had three really different DJs with some very weird but very exciting music, and same with the three student stages. We were able to have three totally different stages that had their own vibes. I love how much variety there is here.”