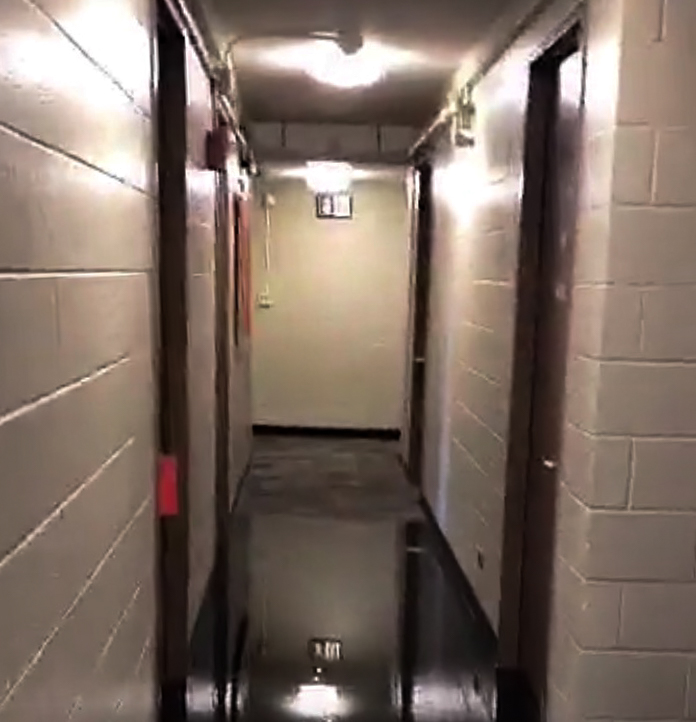 Butterfields C flooded after the building’s sprinkler system was set off by a student on the third floor on Saturday, April 28.

The flooding was caused by a student pulling a sweater down from a shelf, which subsequently hit a sprinkler in the room. The sprinkler system, according to those at the scene, went off for around 20 minutes before firemen could turn it off. Students in the building were evacuated for the day.

According to Director of Public Safety Scott Rhode, the incident was reported at 11:09 a.m. on Saturday morning. The fire alarm went off around this time, and students exited the building. Students then received an email update at 1:14 p.m. that they could return to rooms and pick up any essential items and were told they would receive an update on the situation by 5 p.m. At this time, much of the building was without power.

An update then came at 5:06 p.m., informing students that if they lived in rooms without water damage, they would be allowed to once again return to grab items. Students were told they would know by 7 p.m. whether they could return for the night.

But at 6:43 p.m., all students were informed that they could officially re-enter the dorm.

“EVERYONE can go back to their rooms. Yay!” the final email reads. “For the residents that were affected by the water, you can go back as well. There are fans in every hallway as well as a humidifier. So it will be noisy. If you’d like to turn off the humidifier before you go back to bed, then you can, but it must go back on in the morning!”

Area Coordinator (AC) Alexia Thompson, who was on duty at the time, was called in early in the morning and informed of the situation.

“When I got there, students were in the Butts, the Fire Department was already there, and people were outside, so I got briefed on what was going on because they were getting people out of the building,” Thompson said.

“I thought the fire department knew how to turn it off, but apparently they didn’t, so it kept pouring out,” she explained. “What I was being told was just, ‘As of now, no one can go back in the building.’ So I gathered all the students—I had them in two sections—I gathered the students who were in the courtyard of Butts C area, and I said, ‘Hey folks, water’s pouring out and you cannot go back in. If you are on this particular wing of the building, the power is shut off, I was informed about that, it’s best that you come back and I’ll keep in touch with you through email.’”

According to Director of Physical Plant Alan Rubacha, the sprinkler system in the Butterfields is akin to most others on campus. A pipe connects water from the City of Middletown to a network of pipes in Butterfields C, which is designed based on codes concerning how much water should be distributed throughout the building.

“Fire projection heads are tapped into the pipe that contain a fluid in a glass tube,” he explained in an email to The Argus. “As the fluid heats up to a certain temperature the glass breaks allowing a plug to be pushed out of the pipe by the pressure of the water and then water continues to flow until it is shut off. The system is designed with a series of valves and drains to allow it to be shut off and tested. The system is also interconnected with the fire alarm so that it will set the alarm off with the flow of water.”

A student who lives on the third floor of Butterfields C took responsibility for the flooding. In an email to the Butterfields C mailing list with the subject line “From a Sorry Butthead,” the student addressed the dorm members affected by the sprinklers.

“I’d like to apologize for yesterday,” the student wrote. “My room had the sprinkler that went off. To set the story straight, I was pulling a sweater down from my top shelf at arms length and on its way down, the sweater hit the sprinkler and set it off. The firemen were unable to shut it off for quite some time because the system is programmed to empty the entire water tank if a sprinkler is set off.”

The student also noted that she felt that this incident indicated that the sprinkler system was evidently outdated.

“The fire marshal also saw the sprinkler and said it is not up to code,” the student wrote.“It’s about 5 inches from the shelf and there is supposed to be an 18 inch clearance around it so it’s not accessible. They said they would probably have to remodel all rooms with this design.”

The student ended the email by mentioning damaged items and told dorm members that there is a current plan to address the University in coming days to determine the best course of action. The student asked dorm members to let them know of anything students want to bring to the University’s attention and gives “sincere apologies” for any sentimental items that were damaged.

According to Thompson, some students had damaged items, while others only had floor damage. Though she does not have much information at this time, Thompson explained that the University is currently asking students for lists of damaged items, though no course of action with regard to compensation has been formally set.

“I do think the University will do something for kids,” Thompson said.

The student who admitted responsibility closed their email with a reiteration that the flooding was accidental.

“Please understand this was a complete accident,” the student wrote. “I did not think grabbing a sweater could actually bring the ceilings down.”