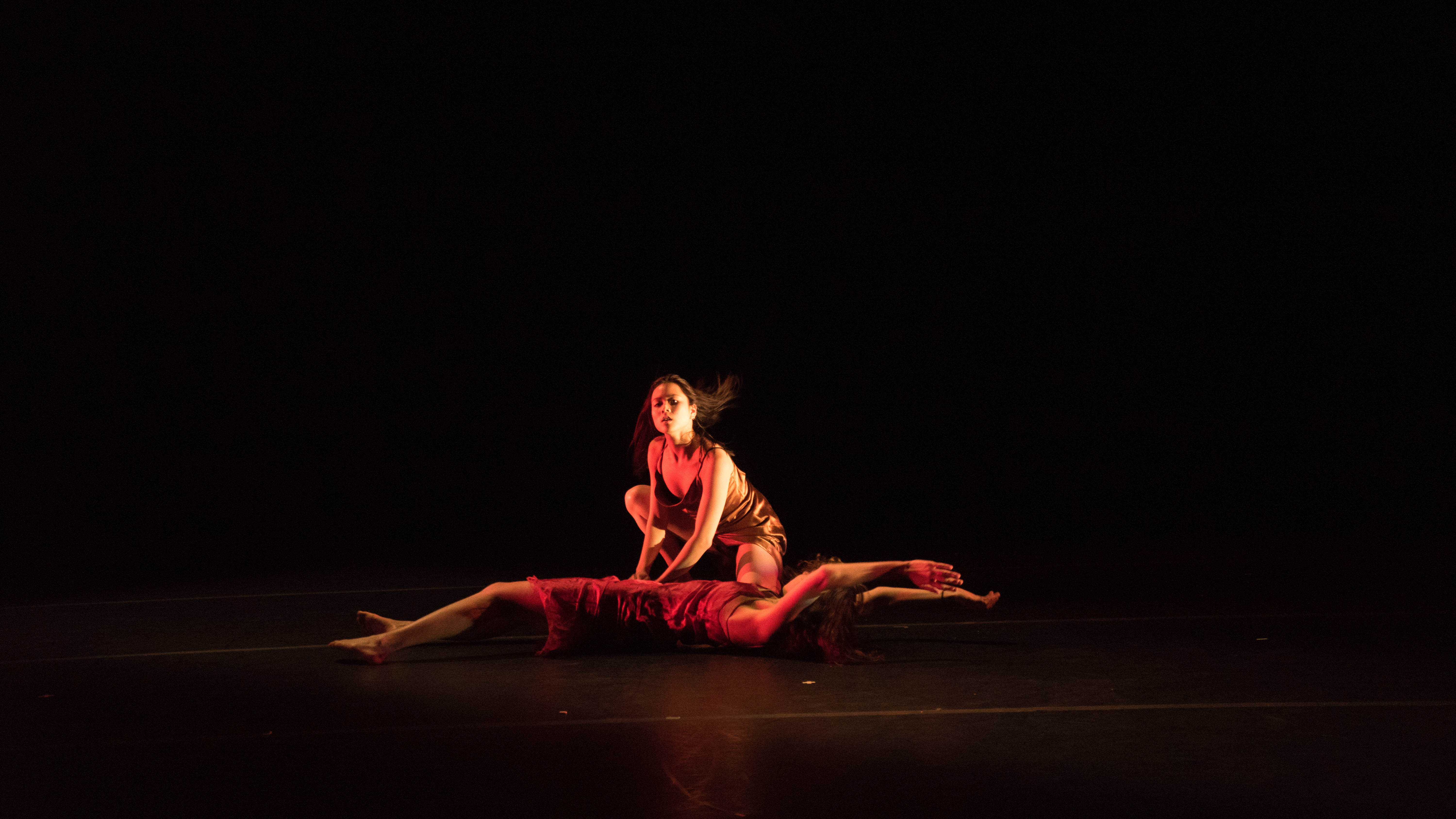 This year’s Spring Senior Dance Thesis Concert featured original choreography from seven dance majors: Vaishvi Jhaveri, Rachel Davis, Amira Ottley, Luisa Donovan, Adriana Phillips, Laurel QingXian Comins-Sporbert, and Monica Sun. A range of styles and subject matters were displayed in the ’92 Theater, creating a unique and engaging audience experience. In this performance, use of the total body as a storytelling instrument became key to elicit personal responses from audience members. Across the board, the pieces were evocative, and the hard work put into their creation clearly shone through.

The concert opened with Jhaveri’s piece. Her choreography comprised very fluid motions characterized by smoothly undulating limbs. There was also a consistent motif of one dancer being isolated in solo choreography while the rest of the group performed synchronized movement. Through both the choreography and the facial expressions of the dancers, a sense of pain and loss was evoked, with emotions drawing from many sources—sometimes resembling yoga, sometimes ballet, sometimes modern dance. Jhaveri also utilized a cover of the classic “Moon River” to back up a more balletic and jazz-style duet. This work utilized dance as a form of telling many different stories, each evocative of pain and loss. It was emotionally effective and interpretive, so while the feeling of the dance was clear, each audience member could create their own story to accompany the motion.

The opener was followed by a duet choreographed by Davis, which she pursued as a Dance-Government joint thesis. The piece centered on the notion of walls and had clear modern dance influences. The stage’s setup featured one rolling boundary separating the two dancers, immediately introducing a sense of division and isolation, with the female side of the duet characterized by more composed and balletic motions. The male side was manic, filled with rage and wild, erratic movements. Once the dancers finally met, they had a sort of conversation through dance, a poignant moment of simply breathing in unison. The relationship between the dancers shifted once more to become more playful and energetic. To finish, they walked off together more casually, with calmer, happier expressions and looser movements.

The next dance, choreographed by Ottley, began not with music, but with the rhythm of movement itself. Two dancers stepped forward and backward, clapping their hands together, almost like a sort of dance game. In this first segment of the dance, there was a great deal of power, strength, and precision as the women functioned as one unit, separating into different movements and then coming together once more. The second portion of the dance, however, had a greater sense of joy and freedom. There was more personality; it almost resembled how one would dance at a party with friends rather than a formal, choreographed work, which was refreshing and fun. The next segment of the dance started with an almost 1920s-esque, jazz style of dance, reminiscent of the Charleston. The sense of joy and freedom continued with movements evoking 1920s and 1960s dance trends. The piece ends as it began, with silence aside from the sound of the rhythm of feet. The dancers looked like they were genuinely enjoying themselves and one another’s company, and the various styles shared a sense of high energy and excitement. It also felt organized with a sort of chronology, touring through the history of dance styles and culture.

Donovan’s work was perhaps the most connected to theater out of the dances displayed. The piece began with an applause sound effect, inverting the natural expectation of applause only at the end. The set featured two paper figures on chairs, Luna bars littered at their feet. The piece began dramatically, with flashes of light revealing the dancers shaking and jiggling in different poses. The dance also featured images of over-examination of the body, grabbing the stomach, inspecting tummy rolls and leg profiles. These images were interspersed with struts and poses, the dancers exuding confidence and sex appeal. Both dancers also ate the Luna Bars while onstage. This work explores the complex relationship between mind, body, food, and confidence. This is especially relevant as a dance piece, considering the high rate of eating disorders in the world of professional dancers.

Phillips’ choreography followed, featuring a cast that consisted solely of woman-identifying international and second-generation American students. It opened with Phillips in a red ball gown and red lighting singing a high, melancholic tune, followed by the same melody played by a live accompanist on viola. A clear marker of Phillips’ work is that of individual motion; the dancers often had differing choreography from one another. They synced up in certain motions like running and rolling but would then split off into individual movements, leading the eye around the stage. The dancers finished in a line at the edge of the stage, clapping and shifting backwards after the music cut out. Phillips’ work dealt with the issues of heartache, home, and loneliness. However, there was also a sense of finding a new home with the other dancers, creating unity after pain.

Comins-Sporbert’s piece, which, following Phillips’, opened by evoking a gospel air, both in the music and movement choices. Once again, the dance style featured a mixture of ballet, modern, and contemporary influences. The dance featured smooth motion and circular motifs, as well as a repeated movement of bodily convulsion. The dance, especially given the music choice, brought with it a sense of sorrow or hurt. The movement was cathartic in a way, as it seemed to purge some kind of pent-up pain.

The show closed with Sun’s thesis, which began with the dancers on their knees with their faces buried. A prominent feature of this piece was its slow, deliberate hand motions, reminiscent of tai chi. This was balanced with strong, swift leg motions. Sun’s work was also unique in its heavy use of lateral motion, splitting the audience’s gaze. The mixture of ecstatic, circular motions and leg extensions with extremely slow, purposeful movements created variety and balance within the work.

After months of hard work, the visions of each of these seniors have come to fruition, and they, along with their dancers can breathe a sigh of relief. All that is left is the applause and the lasting impact upon each viewer of the showcase.