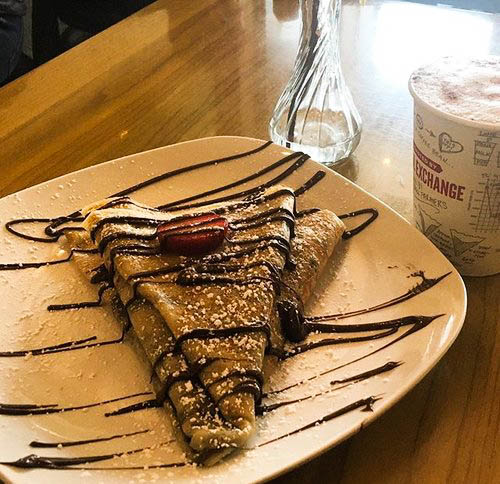 I make this clarification for two reasons. First, my original pitch for this story—“can I write an article about how everybody pronounces crêpe wrong?”—aside from being totally obnoxious, was far too short to sustain an actual article. Nonetheless, I would still like to inform the people, so there you go. Second, the crêpe, which translates to “thin pancake of the gods” (don’t look it up—I’m a French major, I wouldn’t lie to you), holds a special place in my heart.

I come from a family of francophiles of food, “of food” being an important distinction because very few members of my family actually speak French or know much about French culture. But, boy, do they love their crêpes. Growing up, crêpes were a special treat that my dad made. Since he had to get up early to go to work, we really only got to enjoy them on weekends. The source of my dad’s recipe is mysterious: it may have been handed down from his father, or it may have been taken off of allrecipes.com. We can never know, but wherever it came from, it’s delicious. Since my paternal grandfather is the origin of my family’s French foodie tradition, whenever he came to visit, we would make crêpes. My grandfather would pick the tiny wild strawberries that grew in the park near our house—which my brother and I were convinced were poisonous—and add them to his chocolate-filled crêpes.

The point of this anecdote is that I love crêpes, and it won’t take Sacha Baron Cohen breaking my arm for me to admit it. My devotion to crêpes means that I know a good crêpe when I see it. If you’re in the mood for a crêpe, there are a few options. Option one is to study abroad in Paris, which is, realistically, not a very good option, especially if you don’t speak any French.

Option two is to head down to Main Street and grab a crêpe from Perk on Main. They’re quite good. If you’re in the mood for a savory crêpe, try the Swiss Chalet. If you want a dessert crêpe, you can’t beat Nutella and strawberries. I personally recommend going with a friend and ordering both a savory and sweet crêpe to share. It’s the best of both worlds.

The third option, if you have time on your hands and are feeling enterprising, is to make your own crêpe. The recipe is pretty simple and the options are endless.

The process of making the batter is not at all complex: just mix all your ingredients together. Get a pan and spread a thin layer of batter so that it covers the whole surface. Keep the heat pretty low, and flip the crêpe when it turns a nice golden-brown color. When it’s almost done, add your fillings. The simplest option, which is actually a French favorite, is crêpe à sucre. As its name suggests, it’s just a crêpe with some granulated sugar. If you’re feeling fancier, you can break out some Nutella or maybe some gruyere (though probably not together, unless that’s your thing).

Don’t think you need to have an occasion for which to make some crêpes. Crêpes are great brunch food, and everyone loves brunch. Crêpes are the perfect blend of sweet and savory, so they will satisfy all of your brunch needs. If you’re the kind of person who goes for waffles, make a crêpe with Nutella and fruit. If you’re more of a scrambled eggs fan, throw some eggs inside. The possibilities are endless and they’re all delicious. So go, enjoy your thin pancake of the gods, and maybe have some champagne while you’re at it.