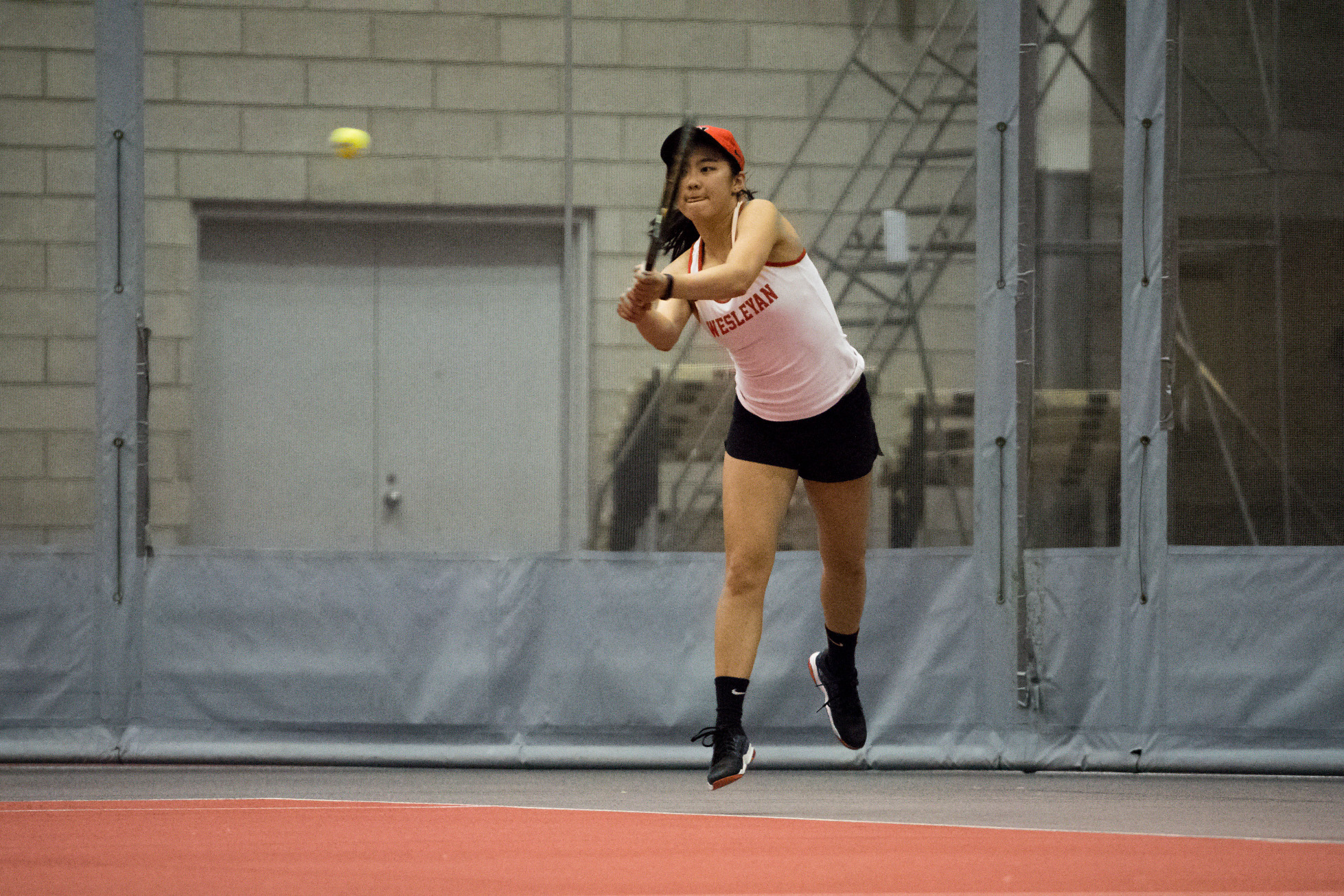 Despite the Middletown snow, spring has finally sprung on the men’s and women’s tennis teams. As per custom, both spent their spring breaks in California, where they competed against the best teams in the nation. The women comfortably defeated all four of their opponents, but the men encountered growing pains, vanquishing only one of their five.

The fall season, which involves individual competition only, featured standout performances from Andrew Finkelman ’21, who defeated last year’s NCAA Division III Singles Champion Lubomir Cuba of Middlebury; Eudice Chong ’18, who competed in the singles draw at the ITA Fall National Championships in Indian Wells, Calif., and Victoria Yu ’19, who, along with Chong, reached the quarterfinals in the doubles draw of the same tournament.

The women’s first matchup came up against the then 13th-ranked Washington University in St. Louis. Sweeping 9-0, the Cards had several standout performances: first-year doubles pairing of Polina Kiseleva and Alissa Nakamoto handily defeated their opponents 8-3; Chong trounced her opponent 6-2, 6-2 at number one singles; and Helen Klass-Warch ’18 conquered her opponent 6-3, 6-2, at number six singles.

The Cards’ next dual came up against the formidable and then fifth-ranked Pomona-Pitzer, whom the Dirty Birds took down in a close 6-3. Throughout the spring break trip, the Red and Black played excellent doubles, and nowhere was this more evident than versus the Sagehens, whom they trounced in all three matches. Singles was a little more trying for the Cardinals, but they prevailed, with easy victories from Chong, who won 6-4, 6-1 at number one, and Nakamoto, who won 7-5 at number five due to a retirement, and a rollercoaster triumph from Kiseleva, who defeated her opponent 6-0, 2-6, 6-1 at number four.

Next on the dinner table, or perhaps in the bird feeder, was 23rd-ranked Southwestern University. Wesleyan dominated 9-0, with highlights including an absolutely perfect 6-0, 6-0 victory from Yu and a gritty 6-2, 3-6, 10-4 win from Aashli Budhiraja ’18 at number three singles.

In the final dual, the Cards battled with the 34th-ranked University of Redlands, taking them down 8-1. Strong victories for the Redbirds came from Klass-Warch, who triumphed 1-6, 6-1, 10-8 at number four, and her sister Zoe Klass-Warch ’21, who vanquished her opponent 6-3, 6-0.

After such a successful opening to the season, perhaps the biggest worry for the women’s team is resting on their laurels.

“The women’s team was a little healthier and played a little sharper in CA,” said head coach Mike Fried. “We’re very happy with our results—but still also learned quite a bit about what we need to work on to continue to be in position to win tough matches.  For both teams, the focus is on having great practices every single day—and maintaining our culture of camaraderie, support, and accountability to our high standards.”

The prosperity of the women’s spring trip stands in stark contrast to the men’s. The Cards’ first matchup, also their only victory, was versus then 13th-ranked Trinity University, defeating them 6-3. Highlights from the dual include a doubles conquest from Win Smith ’21 and Jonathan Holtzman ’20, winning 8-5 at number two, and dominating victories from Steven Chen ’18, who won 6-4, 6-0 at number one, and Finkelman, who triumphed 6-3, 6-2 at number two.

But the Cards’ good fortunes would last no longer. Next up was the dominant and then second-ranked Claremont Mudd Scripps, who defeated the Dirty Birds 9-0. Although the Cardinals left a lot to be desired on court, standout performances against the Stags came from Adrian Roji ’21 and Princeton Carter ’20 at number one doubles, falling 8-6, and Tiago Eusebio ’18, who fell 6-3, 6-4 at number three singles.

After CMS came a tough 5-4 loss to then seventh-ranked WashU. Roji and Carter sought vengeance at their previous loss and prevailed 8-6 at number one doubles. In singles, Chen prevailed 6-4, 6-4 at number one, Finkelman 6-3, 6-1 at number two, and Carter 6-4, 6-2.

Following WashU, the Dirty Birds fell 7-2 to then number one-ranked Emory University, with the Cards two victories coming from Chen at number one singles, winning 6-3, 4-6, 10-8, and Roji at number six singles, winning 6-4, 2-6, 10-7. However, all three doubles matches were tight losses, with the Cards coming within three games of triumph in each. But for the best team in the country, the Cards’ scores represent a competitive and fighting spirit against an exceedingly tough opponent.

Capping of the Redbirds’ tough vacation out west was a 6-3 loss to then eighth-ranked Carnegie Mellon University. Top performances came from Chen and Cam Daniels ’18 at number two doubles, dominating 8-2, Daniels’ 6-2, 7-6 (11) victory at number four singles, and Roji’s 6-3, 6-3 victory at number six singles.

After such a challenging voyage to the state of supposed prosperity, it’s easy for members of the men’s team to be frustrated.

“It was difficult going to California and playing literally our first dual matches of the year against the top teams in the country,”Finkelman said. “There was little time to work out kinks or find our groove as a team. We went straight into the fire.”

The women’s team has three away matches versus Hamilton, Williams, and Trinity (from Conn.) before their first home dual versus Tufts on Saturday, Apr. 14. The men will also compete away against Hamilton and Williams before returning on Thursday, Apr. 12 for their first home match versus Trinity.

But to have any success at these duals, the Cards need to be fit and ready.

“The critical factors for both team going forward will be health,” Coach Fried said. “It’ll be critical to get and stay healthy, as we continue to work through injuries.”

“We left California feeling hungry to get back and compete, and being in the NESCAC we get a chance every weekend to compete and get big wins against solid teams,” Finkelman said. “Of course we’re all also looking forward to breaking in those beautiful new courts down on Vine. Shouts out to all the people who helped make that happen. We’re ready to stain that new paint with our blood, sweat, and tears.”