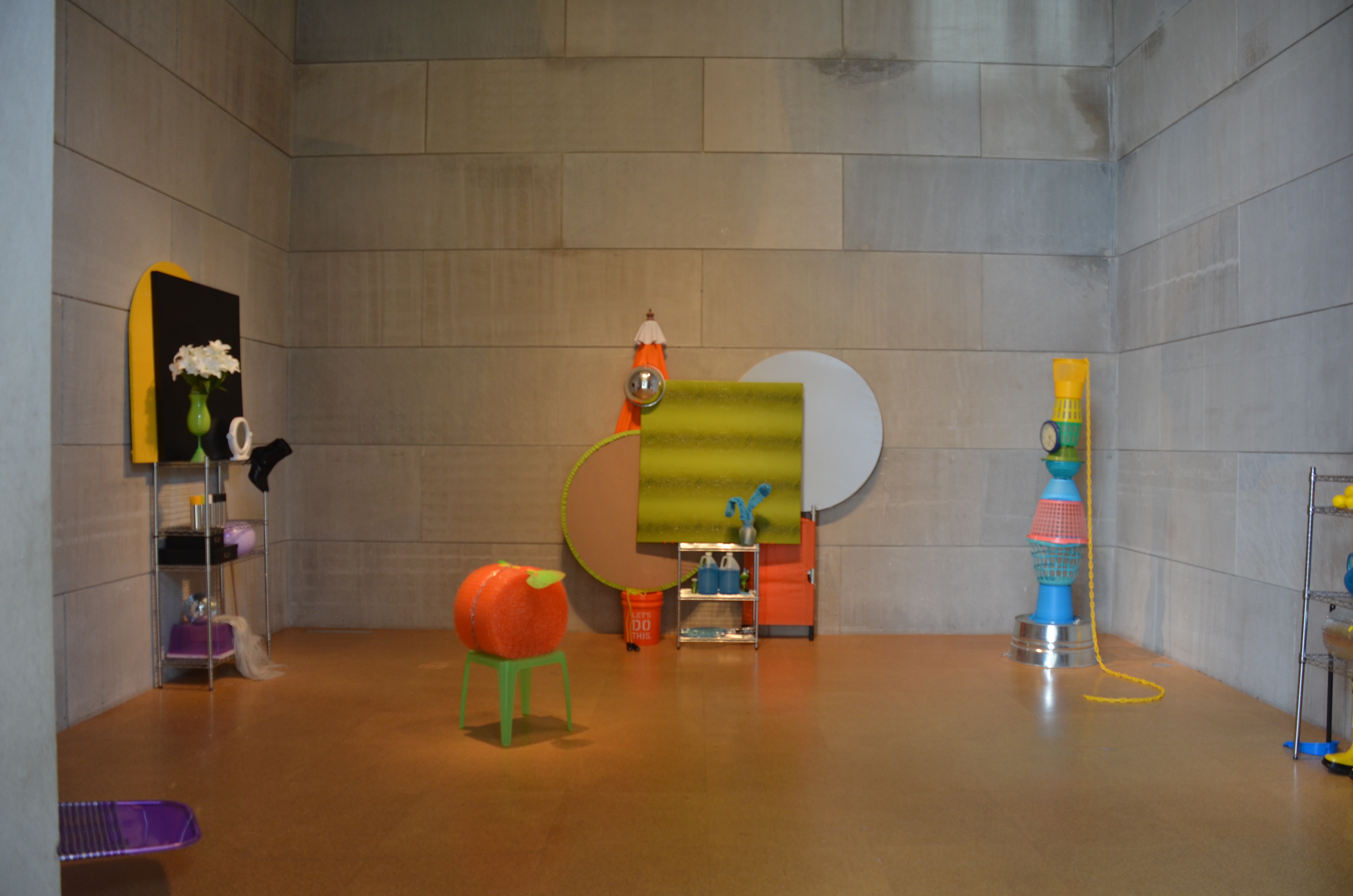 On Tuesday, April 3, six studio art majors debuted their senior theses at the Zilkha Gallery. The three painting collections, two sculptures sets, and one design project made for a diverse and impressive show, and demonstrated the scale and breadth of Wesleyan’s talent.

Tess Iannarone’s collection of oil paintings, entitled “Trespassing,” are based on photos of nature and abandoned houses that she took while visiting her mother’s childhood home in upstate New York. The area is full of vacation houses, many of which have long been deserted.

“If you go into the woods a little but just off the road, there’ll be pools from the 1920s that have been overgrown, with frogs jumping in,” Iannarone described.

The verdure in her paintings is often detailed in neon greens and pinks, making for an interesting distortion of nature—one inspired by the fear she felt while exploring the area to take the photos that served as inspiration for her paintings, as most of the houses sat on private property, hence the collection’s title.

“I was thinking about my anxiety looking at it,” Iannarone said of her choice of palette. “My mom would always tell me, ‘Just don’t go on other people’s lawns.’ There’s also a lot of ‘No Trespassing’ signs. [But] I was like, ‘I want to go into these houses, nobody’s there.’”

“Bottled Up,” a series of posters, billboards, bottles and postcards by Elena Mehlman, read like advertisements, but instead of displaying different products, the pieces display different emotions.

“We bottle it up so you don’t have to,” reads the first poster in the series. “Introducing ‘Bottled Up,’ as the new way to deal with intense emotions.”

Delusion, repression, hysteria, and insecurity make up the subjects of the subsequent posters. 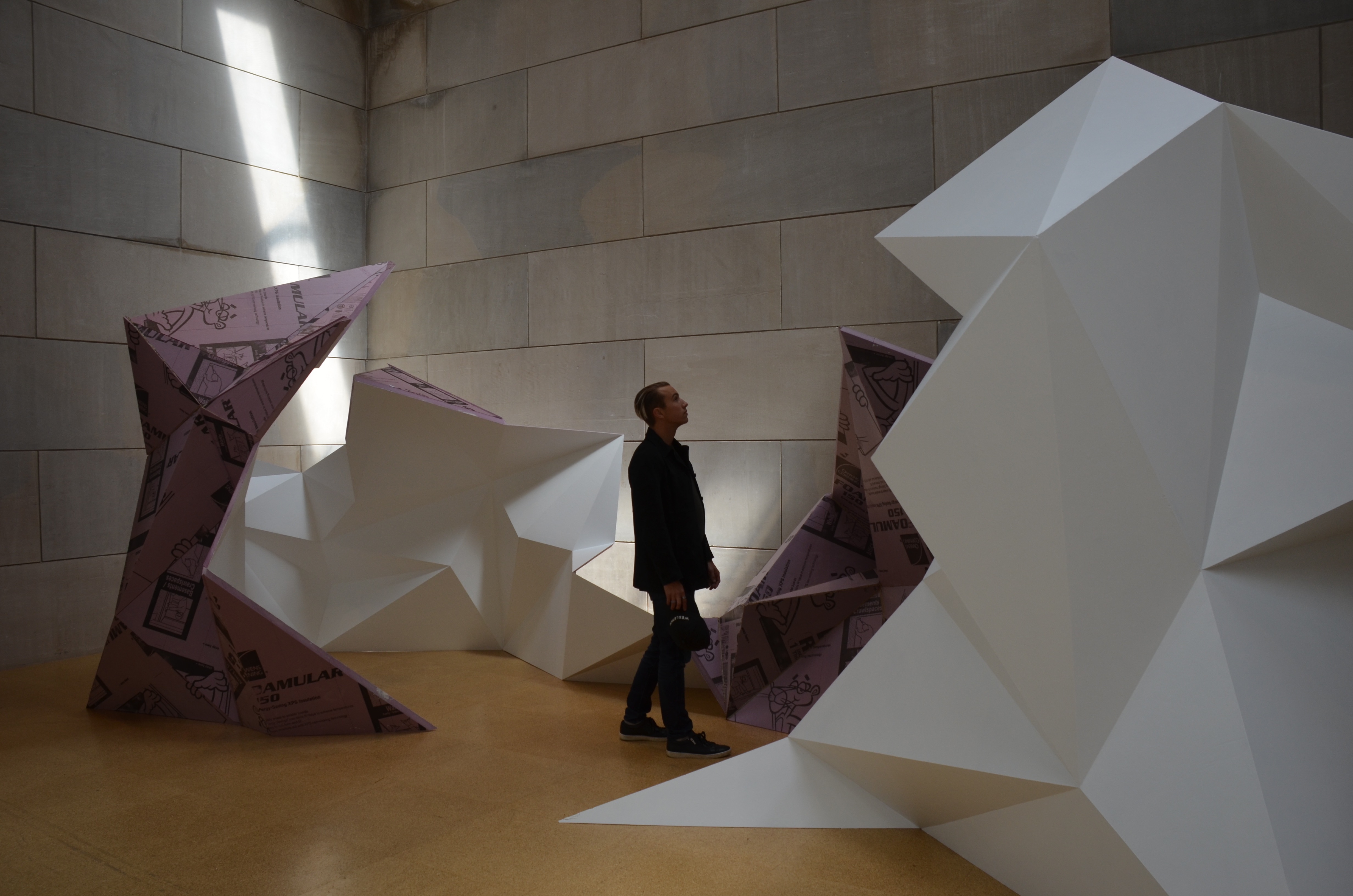 “I just wanted it to be really accessible,” Mehlman explained. “I want people to be able to see themselves in it and realize that these are really universal things. I really didn’t want it to [cast judgment], I wanted it to be more universal, to commodify the things that we all feel really easily.”

Will Richmond’s sculpture, “outside/in,” captivates its viewer through playing with geometric forms. Visitors can enter and walk through the styrofoam sculpture, allowing them to experience Richmond’s creation from both inside and outside of the piece.

“I was playing with platonic solids because I was interested in perfection,” Richmond said. “I wanted [to create] something that was organic and abstract and was void of any reference but was still interesting to me. What’s in the gallery now is, for me, a lot about my personal struggle with trying to hide the messy, glued-up inside parts and show this very perfect, pristine, very precise, clean outside, and how that has been flipped.”

“Inspired by my background in science, I took close-up studies of detailed biological material in order to obscure and abstract reality in a way that would invite viewers to confront and question their own methods of observation,” said Pierce. “The subject, scale, media, and technique were all meant to feel unclear in order to create a confusing and disorienting visual experience. I am really interested in the idea of having an image that lacks any sense of clarity despite an abundance of information, and I really tried to capture this tension between specificity and uncertainty in my paintings.”

Through painting on aluminum sheets of metal, Pierce hoped to push the notion of ambiguity, forcing the viewer to question not only the content of the work but the material as well. 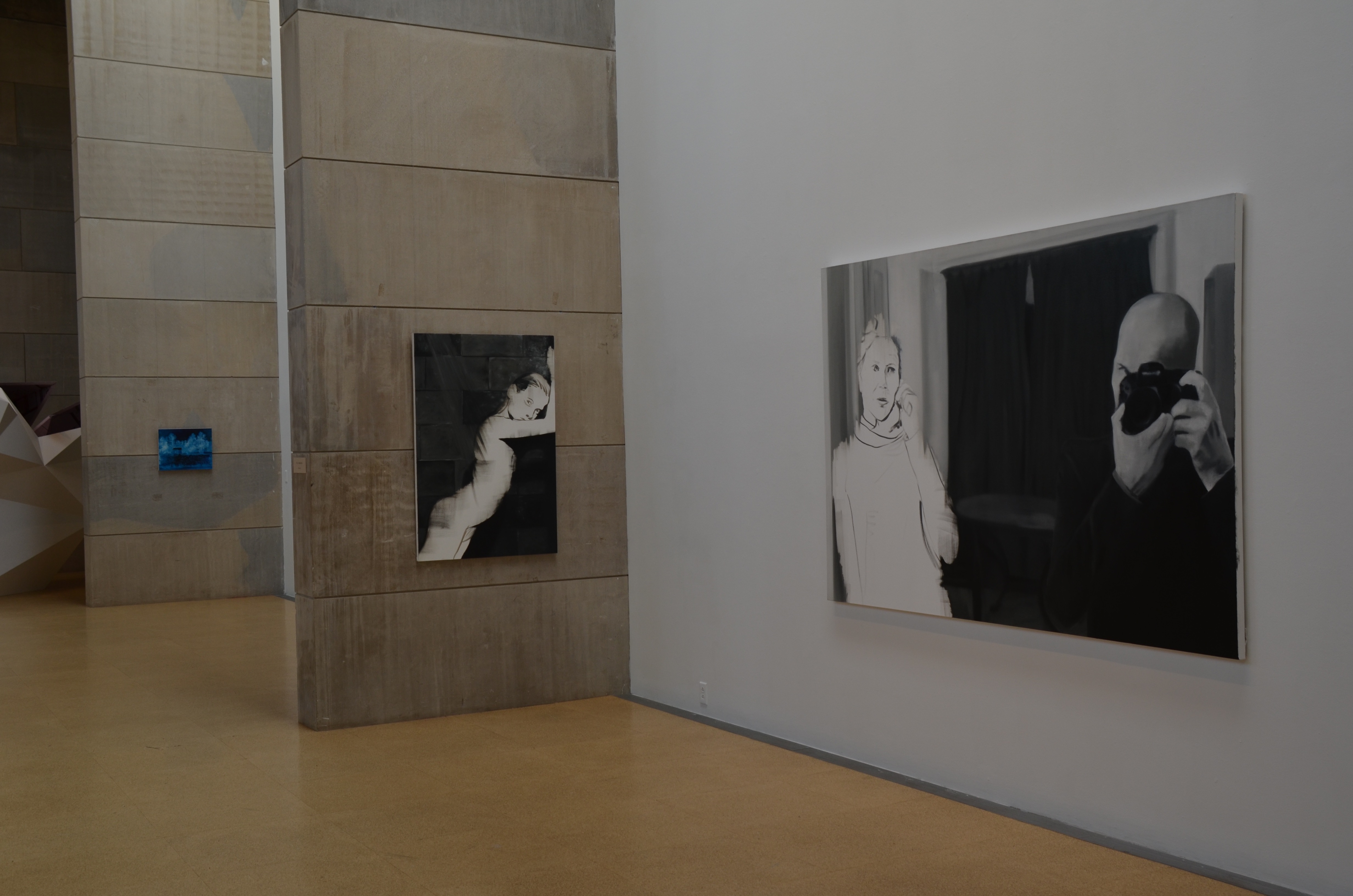 Celina Bernstein’s, “Personal Conviction,” a collection of paintings paired with three audio components, is about her personal experience with sexual abuse. Three sets of headphones and mp3 players each sit atop a chair, all situated in the middle of the hall that hosts her paintings on either side. The audio files contain conversations about the paintings and about the experiences that inspired them. The recordings are raw and honest and emotional, touching upon important ideas about what it means to process trauma.

“For about two years before I actually did my thesis, I was basically trying to think of ways to make it about [my experience with sexual abuse] without actually making it about that,” Bernstein reflected. “At a certain point, like the day that I had to go to my advisor and tell her what I wanted my thesis to be about, I just decided that it wasn’t worth trying to cover up whatever it was, and that I was just going to do it and deal with the consequences as they came up.”

Almost all of the paintings in the series are in black and white. One of the larger paintings depicts a man and a woman, both facing the viewer. The man holds a camera to his face, pointed at the viewer, poised to photograph. Both the room in the background and the man with the camera are detailed in rich gray tones, while the woman is almost entirely white, filled in only with some minimalist gray lines that give her a ghostly, only semi-present quality, which only draws attention to her—the concern in her face, the way her barely-there hand nervously grips her earlobe. The piece is unsettling; it implicates the viewer, makes them feel targeted. But the discomfort that the painting forces upon its observer effectively draws them into the piece, and forces them to question its meaning.

“[The blank figure] establishes that there’s something not quite right about this picture. It was about depersonalization and the way you can be reduced,” Bernstein noted. “I think I was also really focusing on the way the background really encroaches upon these almost blank, innocent figures…. My goal is, somewhat, to make the viewer uncomfortable with the work. And I think it does that.”

The final piece in this week’s exhibition is Owen Christoph’s “Jamais Vu: A Flâneur’s Dream World,” a bright and colorful multi-part sculpture installation made up of a variety of objects, ranging from fly swatters to wigs to disco balls. Reading Walter Benjamin’s “The Arcades Project” introduced Christoph to the concept of the “flâneur,” which translates from French to “wanderer” or “idler” and references a queer figure who enjoyed strolling around the Paris Arcades—indoor-outdoor mall spaces that arose in the 19th century.

“The starting point of inspiration was window-front displays of commercial spaces, so like tchotchke shops and dollar stores and hardware stores,” Christoph explained. “I was thinking about the window and the frame and how it frames these colorful objects, or oddly placed things in kind of a formal way. I was interested in the idea of not necessarily wanting to have these commercial objects or possess them, but just enjoying the hustle and bustle of the city.”

Sasha Cohen can be reached at srcohen@wesleyan.edu