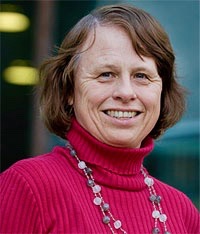 March 25 to 31 is Connecticut Space Week—like Shark Week, but in Connecticut, and even more otherworldly. Museums and universities all over the state host space-related events to celebrate, and one of the most prominent of these events is Wesleyan University’s own annual Sturm Memorial Lecture, hosted by the Astronomy, Chemistry, and Integrative Sciences Departments.

On March 27, Leiden Observatory Professor of Molecular Astrophysics Ewine F. van Dishoeck came to campus to deliver her lecture, speaking to over 200 students, faculty, and community members. She is the 28th Sturm Memorial lecturer invited to Wesleyan, following a tradition of prominent speakers from the astronomy world, ranging from astronauts to cosmologists to astrobiologists. Van Dishoeck herself is an astrochemist, as well as the first international speaker to lecture on campus for this series. Her talk, entitled “Building Stars, Planets, and the Ingredients for Life in Space,” covered star and planet formation and chemical precedents for the formation of life in space. The enthralled audience was, perhaps unsurprisingly, more focused on the “Life in Space” aspect of the talk than any other.

Kenneth Sturm, after whom the lecture is named, was an astronomy student at Wesleyan, and despite his love for astronomy, Sturm never pursued it as a career. As such, the lecture series honors serious commitment to and love of space and astronomy, but via the lens of education rather than the profession. For this reason, the event is free and open to all, and lecturers are not just scientists, but also members of the astronomy community known to be engaging speakers.

After Jacobsen introduced the talk, Assistant Professor of Astronomy and of Integrative Sciences Meredith Hughes came to the podium to introduce van Dishoeck, noting the many awards and accolades she has received over the course of her long career. Hughes highlighted the various fields within astronomy that van Dishoeck has explored.

“She is really one of the world’s experts on molecules in space, which is what she’s going to talk about with us tonight,” Hughes explained. “She has worked on many different scales and environments, from molecular clouds to planet-forming disks. She has worked very broadly across wavelengths, from infrared to radio.”

Van Dishoeck received formal training in chemistry before studying molecular astrophysics, primarily studying the ways in which molecules in space form and interact with each other, simulated in a laboratory setting. Van Dishoeck also has experience with remote detection of molecules in space, using some of the most advanced telescopes in the world. And if that’s not impressive enough, van Dishoeck has also been involved in facilities development of instrumentation and telescopes, and is the co-principal investigator in building one of the main instruments on the James Webb Space Telescope, which will be the Hubble Space Telescope successor.

By way of introduction to her talk, van Dishoeck commented on noticing an advertisement for her lecture, with the words “LIFE IN SPACE” in bold white font on the posters.

“Just to remind you, [my] talk is actually [about] building the stars and planets, and the ingredients for life,” she added jokingly.

At the beginning of her lecture, van Dishoeck described one of the more recent advancements in space exploration: the discovery of exoplanets, or planets that orbit different suns in the galaxy. These planets have been observed through two primary methods. The first is sensing dips in the amount of light a sun emits and correlating that dip in light to a planet’s size and distance from the sun. The second is called the “wobble,” which is a method that involves sensing the change in light that a sun emits when a planet passes in front of it, causing the sun to “wobble” and emit light of a slightly different wavelength.

Van Dishoeck then went on to explain that one of the best ways to study solar system formation is to study our own solar system using physical meteorites as well as to engage in missions to comets to study them in detail.

The bulk of van Dishoeck’s work focused on astrochemistry, the molecular formation of planets and stars.

“When you look up to the sky, you see the stars there, maybe you see a couple of planets, if you’re lucky you can see a galaxy, maybe, but many people have not realized what is in between the stars,” she said. “The space between the stars is not actually empty but is filled with very, very dilute gas. On average, just one atom per cubic centimeter. And it is really within this gas, the denser concentration of this gas that we call clouds, that is where the stars are born.”

For van Dishoeck, one of the most interesting regions of star formation is the Orion Nebula, a gorgeous diffuse nebula south of Orion’s belt in which thousands of young stars are born.

Using a video simulation of the inside of a nebula, van Dishoeck pointed out dark, dense clouds, which she explained are full of tiny dust particles. These particles consist of silicates and carbonaceous materials, which absorb and scatter light.

“These clouds are actually some of the largest objects that we have in the galaxy—they can be several light years in diameter,” van Dishoeck said. “They can contain enough material to form maybe 100,000 new suns.”

These video simulations were one of the most prominent aspects of her talk. Audience members were whipped through nebulas, hurtled past meteorites, and brought to the beginning of a planet’s formation.

Although the romance of studying space through telescopes is appealing, much of van Dishoeck’s work is also in the laboratory, simulating a cubic centimeter of space. Simulating space conditions in order to observe molecular behavior is a tricky process but one to which Van Dishoeck has devoted considerable effort.

“What actually makes it so interesting to me as originally a chemist, because outer space is really this wonderful laboratory, physical-chemical laboratory, that we can study basic processes between atoms and molecules,” she explained.

Van Dishoeck explained that her method for studying dense clouds is to utilize infrared to see stars that are otherwise invisible. In this way, it is possible to study not just what is beyond the cloud, but what is within it. Zooming into one of the dark clouds and shifting light to a longer wavelength, it is possible to see, for example, the birth of young stars—what Van Dishoeck calls “young solar systems in the making.”

But the only way to see these stars, clouds, and nebulas is to utilize high-tech telescopes. Many are on land, but many also need to be placed in space because Earth’s atmosphere contains molecules like water, oxygen, carbon dioxide, and so on, which block radiation from space.

Van Dishoeck devoted the last portion of her talk to speaking about recent advancements in telescope technology, particularly the Atacama Large Millimeter Array (ALMA) Observatory, which was a combination project between North American, European, and East Asian nations. Groundbreaking discoveries have been made via the use of ALMA, which has some of the most powerful telescopes in the world.

Van Dishoeck noted that one of the most important ingredients for life is, of course, water, and so many astronomers are on the hunt for that via these new telescopes. Using another video, Van Dishoeck showed the way in which hydrogen and oxygen atoms, tumbling around on a meteor, can combine and form water molecules, which then form a layer of ice covering a meteor over time. She then showed a video displaying the formation of larger rock bodies in space.

“Here you see an animation of these rotating disk, and here you have these small grains and larger grains,” she said, pointing to a video of grains coagulating. “When they collide, they can stick together…and you see the growth of larger bodies. And it’s through this coagulation that we start to grow from this very small scale to maybe larger, kilometer-sized, and even larger. And we’ve started to get now some observational evidence for this.”

After Van Dishoeck finished her talk, Hughes opened up the floor for questions, many of which centered on Van Dishoeck’s thoughts on the likelihood of life in space, or the chances that aliens are trying to contact us.

“What we have shown is that the ingredients for life, for starting life, are basically around every forming star,” she said in response to one of these questions. “We have not yet found anywhere else but Earth, so not even Mars, or anywhere else in our solar system.”

“You can think of different solvents: Why water, not ammonium, or ethanol, or something else like that?” she said. “And it simply comes down to the fact that there’s so much more water than anything else. Same as carbon…and we know that it is true not just in our galaxy but elsewhere in the universe, that there is more carbon than, say, silicon.”

When the question-asking portion of the talk ended, the audience clapped once again, and Hughes invited all attendees to a reception in the Van Vleck Observatory.

“I hope to have shown you a little bit of the excitement that we’re having at the moment, of trying to find our origins and how we were actually formed some four-and-a-half million years ago,” van Dishoeck said to the audience. “Thank you very much.”