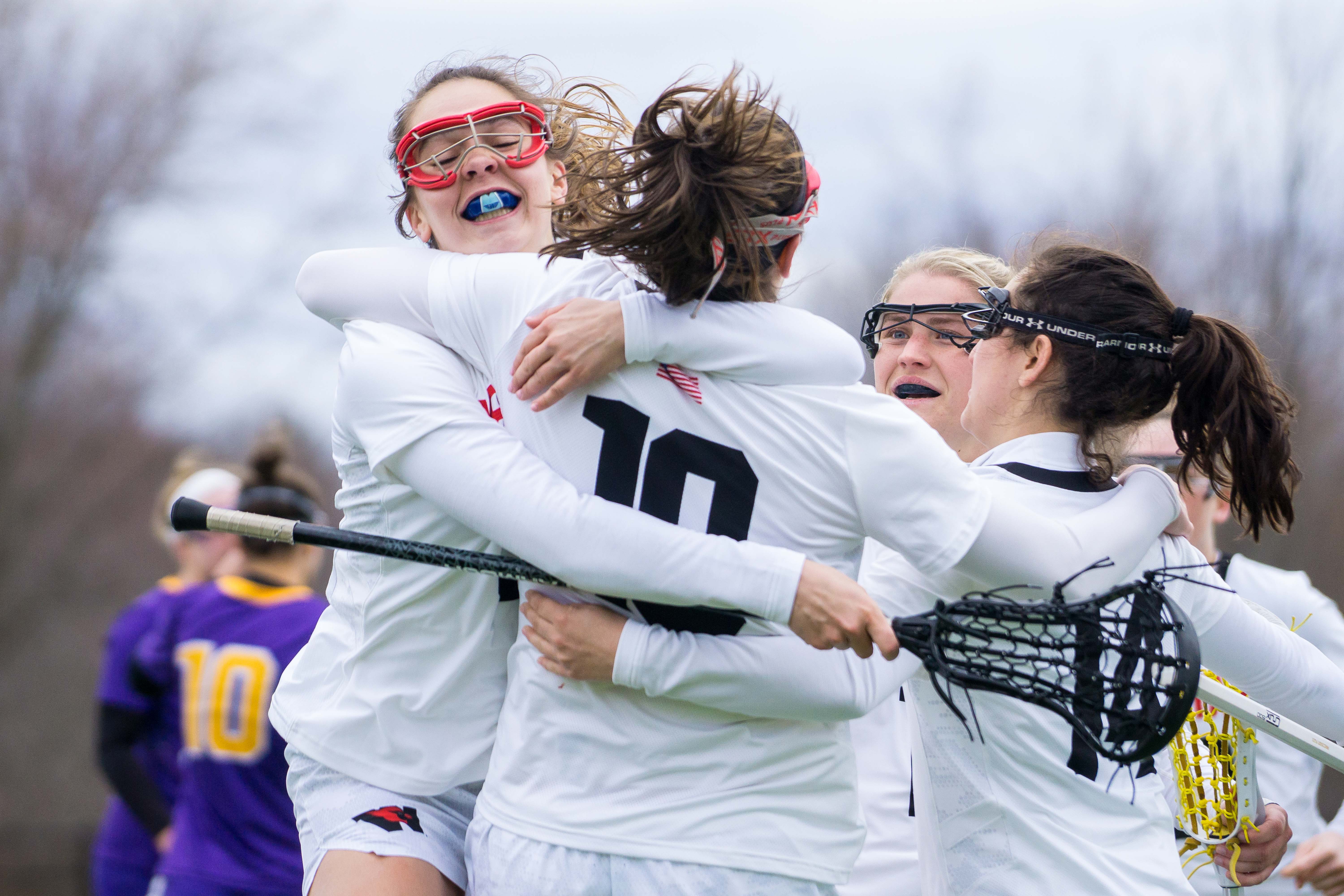 Both lacrosse teams improved their records over spring break to 6-1. Though the women’s team suffered a heartbreaking loss to Stevens on Wednesday, both teams remain strong at this point in the season. Spring break was more than simply a good set of games—it was record-breaking and a proving time for first-year players.

After a stunning loss to the Coast Guard Academy, the men’s squad pulled off a string of victories, starting with Bates. Ronan Jacoby ’21 scored the final goal of the game, ending 13-11 over the NESCAC rival. His contribution suggested that we may see future impressive performances from him, and he delivered weeks later.

In the following game, Christian Barker ’19 joined three of his teammates with his 100th point in the Dirty Birds’ victory over Vassar. All four of them are among the top 25 point scorers in University history.

Just three days later, Taylor Ghesquiere ’18 scored two clutch goals to put the Cardinals over Middlebury, 13-10. His game-high four goals put him over 100 career goals. Only ten other players in program history have earned that distinction.

Facing a top-ten ranked opponent (at the time) in Roanoke, Jacoby had a breakout game, scoring six goals and recording two assists. Wesleyan’s record for most goals in a game is eight, making Jacoby’s six goals as a first-year shocking. Led by Jacoby, the team crushed Roanoke 18-5. The Cardinals led in nearly all statistical categories.

Harry Stanton ’18 broke a Wesleyan record with the Cardinals’ 12-8 win over Skidmore by scoring 188 career goals. The previous record was held by John Landay ’01 with 186 goals. Landay is still the all-time points (combined assists and goals) record holder, leading Stanton by 61 points. 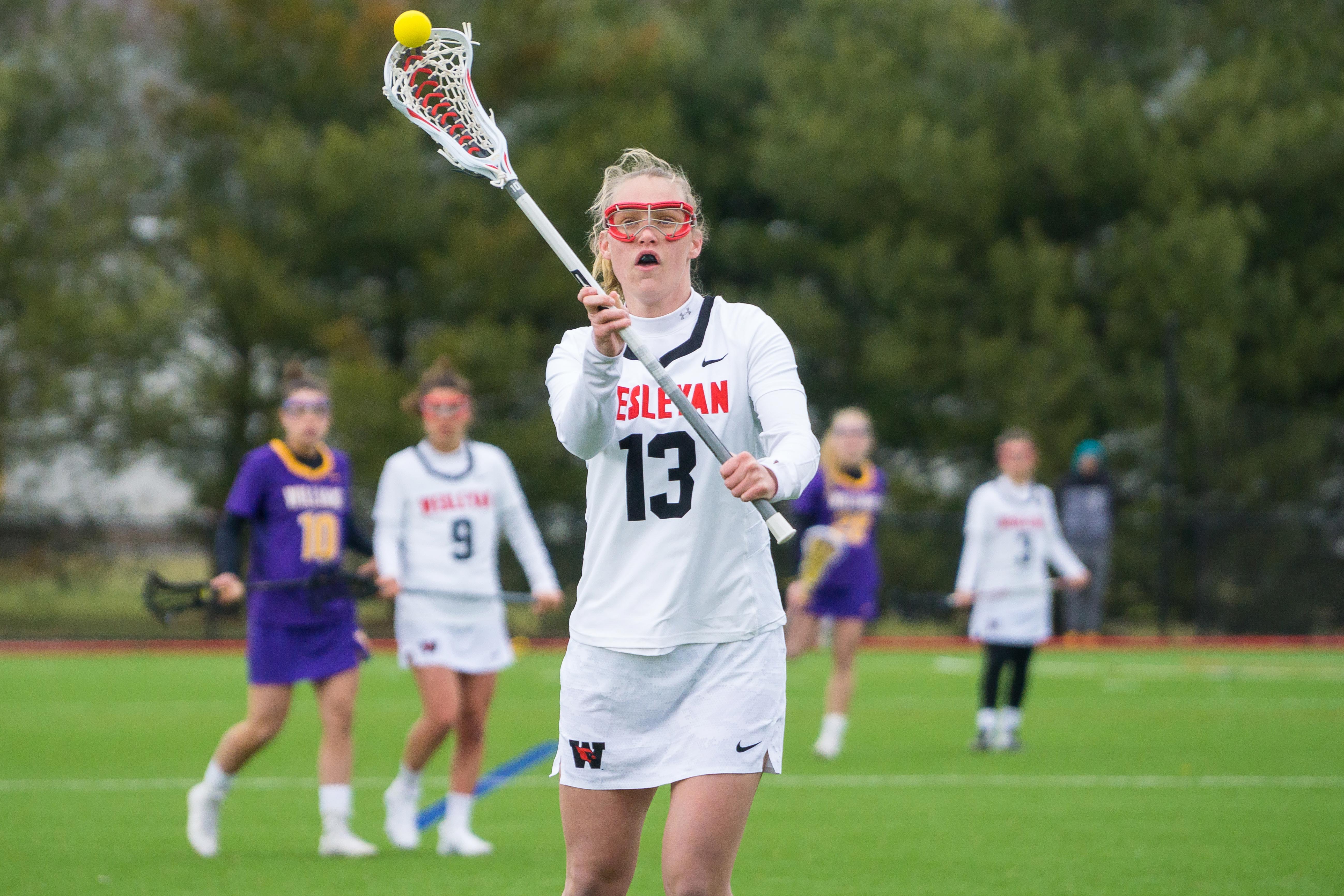 The individual performances are the result of a strong team chemistry that is evidenced in the stat line. The Dirty Birds typically lead in ground balls and face-offs. When the stats between the Cardinals and their opponent are close, Wesleyan overpowers opponents with sharp-shooting offense. Their offensive production has earned them a top-five spot in the Division III rankings.

Turnovers, however, could present a problem for the Cardinals later in the season. Consistently, the men’s team has a comparable, if not worse, turnover rate than their opponent. Turnovers haven’t been a large issue yet for the team, but that could change as they gear up to play seventh-ranked Amherst next Wednesday.

The women’s team has had a tumultuous season, showing both stutters and great strides. Their games over spring break were overall dominant until a fall to No. 25 Stevens last Wednesday.

Then, the team won a close game against Bates, thanks to three goals by Julia Gretsky ’20. Two of her goals came in the final minutes, putting the Cardinals over the Bobcats 9-7.

Caitlin Wood ’19 did the same thing in the following game against The College of New Jersey. Wood’s third goal cemented the victory, netting the game-winner with 1:51 left on the clock. The upset stunned the No. 2 TCNJ, who consistently failed to get past goalie Allegra Grant ’20. Grant had an amazing 15 saves with a 71 percent save rate, paving the way for an unlikely upset.

Their season took a dramatic turn in the following game against Middlebury, who crushed the Cardinals 13-1. The fourth-ranked Panthers controlled the game with 27 shots whereas the Dirty Birds only shot five times.

The team rebounded against Babson with Wood tallying three goals. Eight other players scored as well. The momentum from the win led to another win, this time over St. Lawrence. Abigail Horst ’19 took a turn at leading the game with three goals.

Coming out of spring break, the Birds ranked 12th among Division III colleges. Their 6-1 record is impressive, with both the men and women’s teams suffering only one loss. But the woes of the women’s team continued with a defeat to 25-ranked Stevens. The Cardinals outshot the Ducks by a large margin, but the Ducks’ goalie was too much for the Birds. Stevens earned the victory by one goal. The game is sure to affect the team’s ranking in a season full of shocking defeats and upsets. Horst attributes the difficulties of the season to the strength of opponents and rule changes in women’s lacrosse.

“After losing 6 starters and with major rule changes including free movement and a 90-second shot clock this season has been a learning experience,” Horst said. “Because of our strength in schedule, we have not had one easy game where we didn’t have fight hard for every ball.”

The remaining schedule, which contains seven NESCAC matches, should provide for an exciting ending to the season. The schedule may seem daunting considering the ups and downs of the season, but Horst remains positive.

“There is a whole new type of focus and expectation at practice as we keep raising the bar,” Horst said. “Coach Williams and her staff are constantly helping us to be our best and elevate the game.”

Thus far in the season, both the men and women’s teams have had strong showings and at least one unexpected defeat. The future for each team is uncertain with the men facing only one top-ten team so far and the women falling to Middlebury and Stevens. What will the future hold? We can only wait in anticipation.