On Beautiful People Will Ruin Your Life, the Wombats Inspire Bittersweet Catharsis 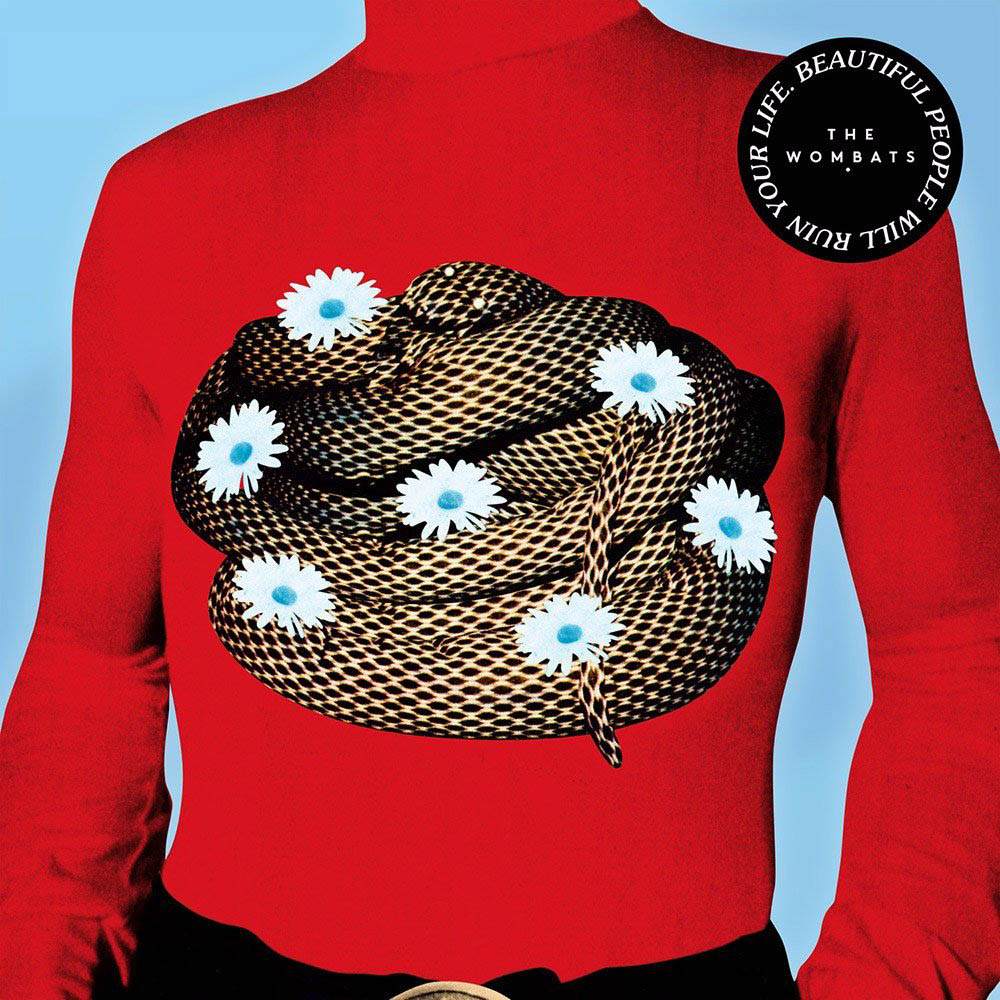 A word of advice: When listening to a new album for the first time, one should never press the “shuffle” button. Randomizing the order of songs is great for a self-curated playlist, but it is just plain wrong when listening to an album in full. There is a reason the songs are in a specific order, and (if the album is good) there will be a flow, a beautiful rise and fall that carries throughout the course of the work. You don’t want to miss out on that dynamic.

This advice applies to Beautiful People Will Ruin Your Life, a new album by The Wombats released on Feb. 9. The chill, indie-rock album draws the listener in with catchy riffs and refrains while also reflecting a great deal of artistic work and thorough consideration for a coherent narrative.

The opening number of this album, “Cheetah Tongue,” succeeds in drawing the listener in with a simple yet charged arrangement of guitar chords. This bare, stripped-down opening is built upon as the song progresses with the addition of percussion allowing for multiple layers of sound. Lyrically, the song falls within the style of description that’s rich but ambiguous—and doesn’t always make total sense. Images of the singer’s “cheetah tongue” are mixed with those of black flamingos and orange cola, with a few references to Chinatown thrown in as well. Perhaps the song is without meaning, or perhaps the meaning is buried. This style of vivid yet detached images is striking, as certain words stick out, even though a fully-formed story may not be told overall.

The second track, “Lemon to a Knife Fight,” opens in much the same way, with a single guitar followed by multiple layers of guitar and percussion. The many guitars in this song, combined with undertones of backup singers, are particularly effective in creating complexity and a rich texture. The track also features clear imagery: this time of driving. Allusions to “red lights,” “lipstick on the backseat,” and “saliva on the dash,” place the listener in a car—potentially with their partner. This partner then morphs topically into the singer’s (Matthew Murphy) own tortured love affair, a violent back-and-forth between two people who cannot get along yet somehow always fall back into one another. Murphy voices his unpreparedness for this relationship with the repeated phrase, “I brought a lemon to a knife fight.” The story of this relationship, characterized by its fighting and shoving, is repeated in the song several times, making it clear that its cyclical nature won’t end anytime soon.

In the third track, titled “Turn,” the relationship between the narrator and the unnamed “you” continues as he sings, “You could give an aspirin the headache of its life,” yet admits, “Maybe it’s the crazy that I miss,” and, “Maybe it’s the bullshit I’d miss.” The relationship is defined by this sense of craziness, as in the chorus he professes, “I like the way your brain works.” The song then shifts to a discussion of memory and, once again, vivid yet disjointed images come together in the song, this time of listening to Drake, floating in a swimming pool, and of black lipstick.

The next song, “Black Flamingo,” plays more with distortion, creating a mix of  ’70s rock and techno sounds while still staying true to the overall indie-rock tint of the album. Once again, the lyrics don’t entirely make sense, with lines like, “burnt down the house and asked the Queen around for tea,” and the chorus of, “I want to stay here in this curse, curse, curse / Black flamingo, black flamingo.” While the lyrics are somewhat odd and disjointed, the song is moved forward with strong and lively percussion and a slowed-down bridge building in intensity as it leads back into the final chorus. Also, the black flamingo reference ties back to the album’s opening track, creating a motif hinged on imagery in addition to the cohesive sound that links the songs together. This smart and subtle connection helps to weave together the work as a whole.

“White Eyes” follows up with a similar opening to that of the songs preceding it, building from a single, simple guitar riff. This track expresses more pain yet also a sense of love or needing another person. Lines like “I need you the most” and “You’re the only drug I wanna take” convey the reliance on this other person and the deep emotion felt toward them. This number’s subject is perhaps more focused than the others, as it specifically addresses his obsession with this person and the need for them in Murphy’s life.

The next number, “Lethal Combination,” relies more heavily on percussion in order to guide the listener into the song. This tune is more lilting and slow, creating a mood of gentle floating. The singer and his “you” once again form a “lethal combination,” but he still vows to hold this person close. It is unclear whether or not the “you” is the same one mentioned in other songs, but considering the combination of toxicity and necessity described in prior songs, it seems likely.

On the following number, “Out of My Head,” the mood shifts to darker and heavier places through the use of a more prominent baseline and distortion. The singer deals with his own neuroses, repeating a need to get out of his own head. He expresses a relatable feeling as he also repeats, “I want to come back to me,” conveying a sense that he is losing himself and feeling generally lost and confused. The pain of previous songs is echoed here, but the focus turns inward rather than fixating on a relationship with someone else.

The following song, “I Only Wear Black,” has a light and bouncy melody mismatched with lyrics alluding to depression. This contrast seems intentional, as there is a generally topsy-turvy sense to the group’s style, which they often play into. The upbeat mood drips into the next song, “Ice Cream,” which has a somewhat bouncier bass line but less disjointed lyrics: “Is there really such a thing as too much fun? An ice cream in the sun.”

The heavier, warmer sound returns on the next (also confection-themed) track, “Dip You in Honey.” This song is probably the most outwardly sexual on the album, with its repetition of the eponymous, “I just wanna dip you in honey.” The style of guitar on this track is evocative of the Beatles during their Magical Mystery Tour phase, bringing about images of ’70s summer love.

Now, our album tour comes to an end with “I Don’t Know Why I Like You But I Do.” Again, images from earlier numbers are reflected in lines such as “You’re in the cherry cake and swimming in my mind, you’re in the orange juice that I spill” and in the repetitions of images of cake and orange cola from earlier songs. The lyrical links help to string together a mismatched whole, helping strange lyrics achieve an odd type of cohesion.

Beautiful People Will Ruin Your Life is not a straightforward work but, rather, a poem in need of further investigation. There are a plethora of strange, disjointed references that don’t give a full, clear meaning but which are evocative and intriguing nonetheless. Like a poem, the tracks are linked together with a similar sound and style but are somewhat difficult to dissect. The combination of songs using the first and second person outlines a sort of tortured, messed-up relationship and the singer’s navigation of it. Despite the puzzling lyrics, themes of love, pain, need, and turmoil come through. The overall title, Beautiful People Will Ruin Your Life, likely refers to this “you” present in so many of the songs, a beautiful person with the capacity to take over a person so much that they lose themselves.

The album seems to be, in many ways, a catharsis—a way of dealing with the tumultuousness of obsession and the way it can bite back. However, with the light and even catchy backing tracks, the listener does not get stuck in the realm of pain and despair. Namely, Beautiful People Will Ruin Your Life will not ruin your life. Quite to the contrary, it will add a nice soundtrack to your everyday routine.