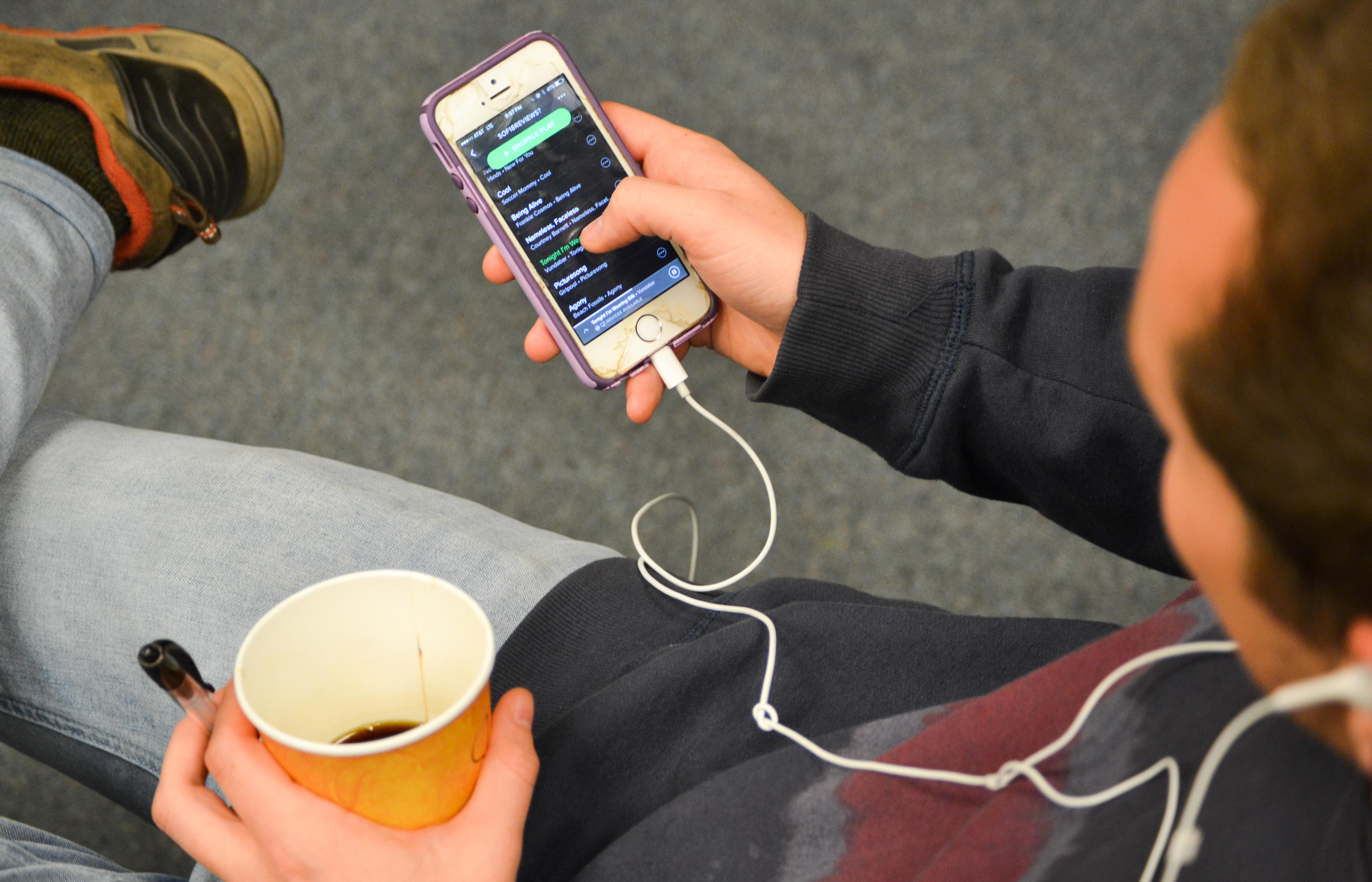 Unfortunately, and for reasons that I do not intend to enumerate here, 2018 has been off to a pretty terrible start. Fortunately, there have been some great music releases over the last two months. Here are ten (well, technically eleven) notable singles of 2018 so far.

If, like me, you experience winter as a period of soul-crushing darkness and deadening cold, then you should consider moving to southern California. If that’s not an option, just listen to Habibi’s new single, “Nedayeh Bahar.” This is Habibi’s first release since their 2013 self-titled Burger Records album. That album consists of 11 songs of pure surf angst manifested in delightfully repetitive, charmingly self-aware songwriting that manages to find the perfect balance of playfulness, aggression, pleasure, and annoyance. Habibi’s songs have laser-like precision, and “Nedayeh Bahar” highlights Habibi’s kickass sense of timing. It is occasionally loud and insistent, occasionally quiet and sneaky, but always pulsing with feeling. This song alternately feels like a recoiled snake getting ready to bite and an incantation to summon of some otherworldly entity or experience. Whether it bites or binds you, submit yourself to its shimmering power.

Detroit, Mich.-based Bonny Doon made a big splash in the indie rock kiddie pool with their 2017 self-titled Salinas Records LP. With elements of country, garage rock, and bedroom pop, they exist in a category of their own. They sound whiny, sincere, twangy, drab, soulful, sad, and nasally, which is a surprisingly winning combination of sounds. Not to mention their often funny, self-deprecating lyrics, which never feel forced or ironic: “Smoke / from palo santo and sage / is it still the new age / or am I too late?” This lyricism is complemented by the most divine interaction of drums and guitar that have hit my ears in years. Listening to this song’s instrumental sections gives me the sensation of floating down a river with no rapids, just currents.

“New For You” by Hinds

My grandma once described Hinds’ music as “jangly crap,” as in, “What the hell is this jangly crap?” Well, grandma, this jangly crap is some of the most exciting pop-rock of 2018! More specifically, Hinds just released a new single, “New For You,” after spending the last few years touring the world. They are the irresistible Spanish queens of jangledom, consistently churning out infectious, bubbly, bouncy rock songs since their 2014 EPs Demo and Barn. Hailing from Madrid, Spain, they originally called themselves Deers, but they changed their name following some legal woes (aka copyright laws). “New For You,” is a noisy, garage-y, head-banging good time. When Hinds’ various vocalists sing “I want to be somebody new!” we hear frustration, optimism, and an almost revelatory joy. We hear something akin to self-liberation, and it is liberating.

If Hinds finds success in excess, Soccer Mommy finds success in restraint. At just 19 years old, Soccer Mommy’s Sophie Allison is a seriously focused musician. Her best songs have astonishing maturity and depth of feeling to them, and she interrogates the highs and lows of adolescence with a frankness that is at once arresting and disarming. Allison’s songwriting is casual in subject matter but meticulous in craft, foregrounding her stunning vocals and guitar. Until recently she also recorded, mixed, and produced her own music, though “Cool” and the upcoming album on which it appears belong to the ever-growing Fat Possum family. Ultimately what makes “Cool” such a great song is its simultaneous mockery, celebration, denigration, and performance of coolness. The obsession with being or appearing cool­—usually associated with high school cafeteria drama—might be stupid and self-defeating, but what if it’s inescapable? Aren’t we all trying to look like we don’t care about looking cool, in an effort to try to look cool?

“Being Alive” by Frankie Cosmos

Frankie Cosmos’s Greta Kline first released “Being Alive” on her 2014 self-produced album affirms glinting, which is still available on her Bandcamp, ingridsuperstar. Upon its first release, “Being Alive” was “being alive,” which we can basically read as a metaphor for Frankie Cosmos’s transformation from DIY bedroom project into indie pop icon. Affirms glinting, like many of Kline’s early releases, is a treasure trove of short, playful, heartfelt songs that embrace the lowercase in all forms: textually, lyrically, affectively, and sonically. The new “Being Alive” is a little brighter, faster, and fancier than the first “being alive,” but it packs just as much of an emotional punch, still benefiting from Kline’s generous, straightforward songwriting and lack of pretension. I recommend both versions of “Being Alive,” as do I recommend ingridsuperstar in its entirety. Think of Kline’s Bandcamp as a magical archival zone from which Frankie Cosmos might at any minute resurrect or conjure spirits.

After teaming up with Kurt Vile last year for Lotta Sea Lice (Matador Records), Courtney Barnett is back to doing what she does best: her own thing. “Nameless, Faceless” is a staunchly feminist rock song, infused with all the smooth Aussie charisma for which Barnett is so deservedly known. I generally hate music videos, but “Nameless, Faceless” offers a quirky, animated collage-aesthetic that is always self-assured, sometimes self-mocking, and occasionally absurd. The video integrates cats, lips, eyes, hands, keys, letters, and park scenery in ways that are usually only seen in the ironic Facebook cover photos of Wesleyan’s most ironic Facebook-using students; yet these elements work well in the video. It’s a strong music video for an even better song. All of this is to say that one of the musical graduation gifts for the class of 2018 will be Courtney Barnett’s new album, Tell Me How You Really Feel, which comes out on May 18, and from which “Nameless, Faceless” is the first single.

Vundabar is so fun, weird, difficult, and defiant that I almost don’t want to describe their music. Let me just say this: they fucking rock. They’re punk rock, garage rock, math rock, grunge rock, Boston rock, New England rock, funk rock, jump-up-and-down rock, deconstruct-their-own-songs rock. They are the type of band that, if you only heard their music for a few random seconds, you might think is atrocious. Such moments of atrocity are part of their thing, but Vundabar is not, in fact, an atrocious band. Vundabar makes energetic rock music that is full of hooks and twists and turns and swerves and breaks and bends. “Tonight I’m Wearing Silk” demonstrates Vundabar’s affinity for these types of movements—it almost sounds like several micro songs that were squeezed next to and into each other. It is brave, bizarre, and bold without feeling gimmicky. Like I said, Vundabar fucking rocks.

Los Angeles, Calif.-based Girlpool have come a long way since their early days as a pair of friends who casually uploaded a self-titled EP to Bandcamp. Cleo Tucker and Harmony Tividad built a cult following as they sang and played guitar and bass together in intimate shows, including a small but packed gig at Music/Art House on Washington Street a few years ago. On their most recent album, Powerplant, they added a drummer (Miles Wintner), and they moved toward a cleaner, tighter sound. If Girlpool falls somewhere in the galaxy of contemporary indie folk stars, their first album, Before the World Was Big, emphasized folk, while Powerplant emphasized indie. Enter “Picturesong,” their new single which features 3 minutes and 18 seconds of Girlpool’s least folk-y, most indie work to date. This isn’t a bad thing, and with Dev Hynes’ (Blood Orange) masterful, sensual influence, I would argue that it’s a very good thing. What Girlpool loses in DIY folk punk ethos, they make up for in chilly synth washes and haunting vocal harmonies. This is a slower, simultaneously heavier and lighter Girlpool.

I feel awful including more than one whiny white boy song on this list (see “I Am Here (I Am Alive)” by Bonny Doon), but Beach Fossils deserve praise for “Agony,” their new Yung Lean cover which is infinitely more interesting than their most recent album, Somersault. Beach Fossils’ self-titled 2010 debut album was dreamy, fluid, and genre-defining for a particular niche of beach-inflected indie rock music (think of DIIV, Real Estate, and Wild Nothing). This album was followed by Clash the Truth, which was softer and more shoe-gaze-y than their first album, but still had a distinct voice. With Somersault, everything kind of… fell apart. The album was unfocused, but not in a way that felt intentional. Suddenly, in covering Yung Lean’s achingly depressing “Agony,” Beach Fossils sound attentive and attached. With none of Somersault’s stilted reserve or indie pop posturing, “Agony” feels precise, present, and prescient. It is a misleadingly chill song, containing layers of pain, loneliness, and longing. Like most people I’ve dated, this song performs, camouflages, and articulates deep emotional turmoil through the veneer of chill—what’s not to love?