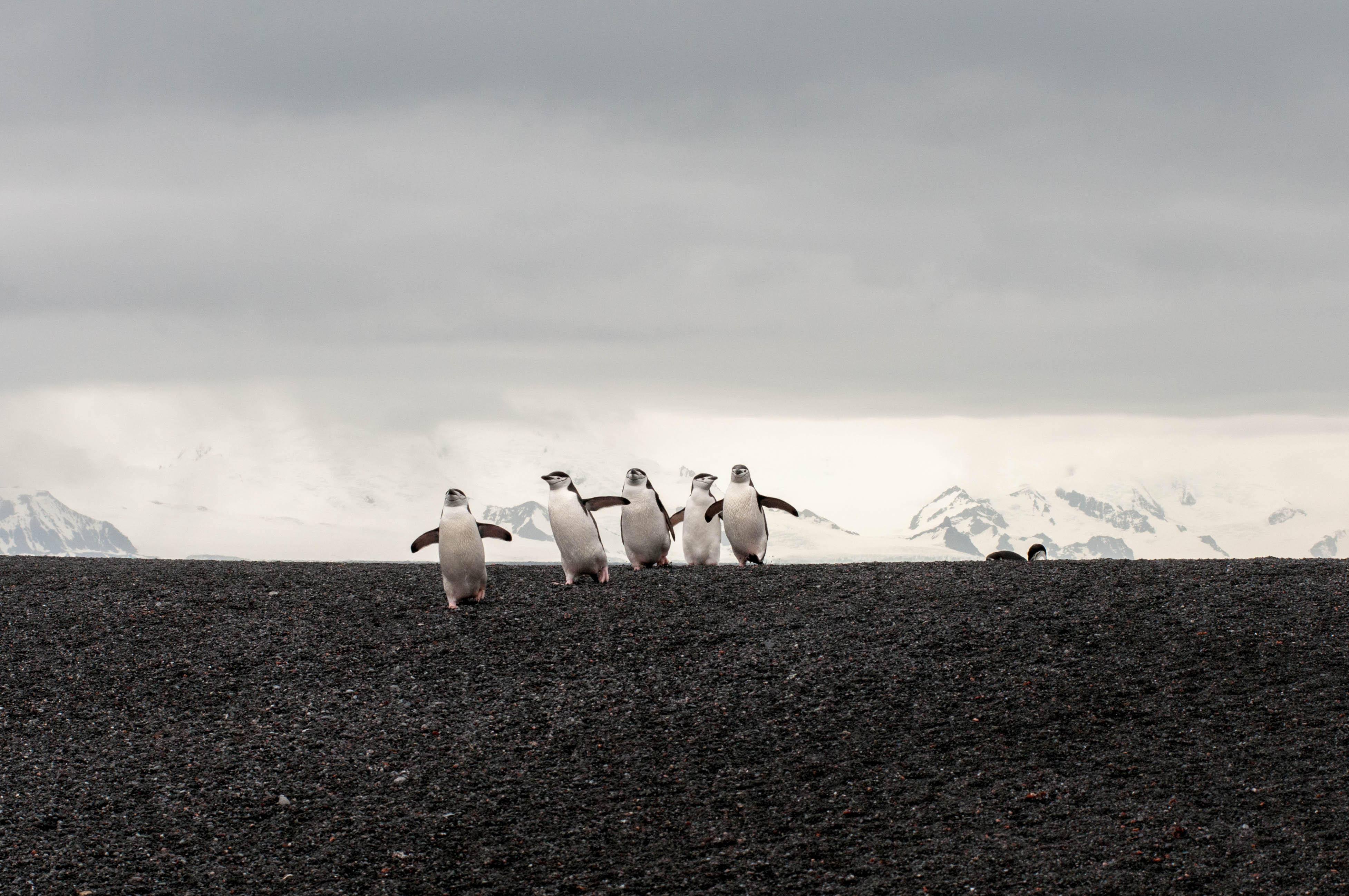 As a photographer, expeditionist, and historian, my father has been to Antarctica over forty times. My house is an Antarctic base, however distant it is from the actual continent (8,494 miles, to be exact), and contains all sorts of penguin paraphernalia (like candlestick holders), photography (usually of vaulting penguins), and a general ambiance of the harsh beauty that defines the continent.

Flying to Buenos Aires, and then to Ushuaia, which lies on Tierra del Fuego and is generally recognized as the southernmost city in the world, is strenuous, if you’ve ever been on a plane, but relentlessly within the bounds of normality. Yet the last steps off the Aerolínas Argentinas flight upon landing in Ushuaia mark the boundary where normalcy begins its hibernation.

Near the bottom of the Earth, distinctly sharp mountains overlook the taxi ride from the airport to the hotel, where we stay for a night before climbing onto the ship. Ushuaia is deeply isolated, dependent primarily on Antarctic tourism, but the anticipation and expectation of whatever mysteries Antarctica has to reveal conceals any feelings of doubt or hesitancy.

To actually sail down and around the Antarctic Peninsula, which tails off of West Antarctica, we voyaged in what was formerly a Soviet research vessel, now converted into an Antarctica tourist paradise, fully set with a bar, three meals a day dining, and a friendly crew, most of whom are Russian or from the Commonwealth.

We sail across the Drake Passage, known for its savage seas that have sunk many enterprising boats, but luckily the waters are relatively tranquil. Nonetheless, the accompanied nausea and warped vision from the pitch and roll of the ship feel vaguely like a psychedelic trip.

Walking out on the deck in the midst of the open sea feels immensely isolating. There is nothing around except vague crests on waves, and a distant dense fog prevents any proper gazing, but the isolation is comforting and rarely terrifying. The inability to connect to anything except the water directly surrounding us allows for moments of serene, casual beauty.

Interrupting these fleeting feelings are the first few icebergs, reflective whites and brilliant blues, the entry into Antarctica proper, that sail by our Peninsula-bound vessel. And occasionally, over the intercom, the Tannoy, we hear whale sightings at three o’clock and nine o’clock, but never six o’clock, because facing backward on the bridge, where the marine spectators are positioned, is strictly forbidden.

Finally, we are off the boat and immediately onto another, a rubber-rimmed zodiac that will take us from shore to sea to shore. But our first zodiac experience is a cruise around Fournier Bay, watching whales porpoise and dive, looking for krill, or giving their calves a lesson. Gazing at these pinnipeds, I am in foundational, basic disbelief. From the perspective of an astronaut, my position on the globe is patently absurd, preposterous to its very core. But another whale rises out of the water, and having borrowed a large camera lens from my father, I snap another shot, hoping vainly that the photo is in focus.

Back on the boat, back to bed, back to sailing, and back on the zodiac, we sail to penguin colonies, disembarking to see if all of my father’s penguin photography stands the test of reality.

Hopping, landing, falling, waddling, swimming, the Gentoo penguins call out for their mates and chicks, a uniform cacophony that is the final proof of our Antarctica bearings. Yet we cannot walk too close to the nesting penguins, who would abandon their nests and their young chicks if frightened by an insensitive tourist.

Our expedition leader refers to these Gentoos as Homer Simpson penguins—standing in the middle of one of the ‘highways’ they tread into the snow results immense confusion for the birds, who will remain in stasis until a clear path is restored. And penguins are selfish and cunning, stealing pebbles from surrounding nests to construct their own. Yet they never get embarrassed when they trip, and never give up when they fail. Having been raised in the Church of Pygoscelis, watching penguins is a spiritual experience, an actualization of everything I had been told. But it is mostly bizarre. My indoctrination presented me with certain expectations, and I’m not sure whether they are being met.

It doesn’t matter. I can’t keep my eyes off them.

At Baily Head, located near an active volcano, we enter a colony of 100,000 chinstraps, whose black backs match perfectly with the black pebbly beach. It’s an unbelievable number of penguins, but a guide tells me that 20 years ago, the colony was more than double the size it is today. All of a sudden, the chinstraps scattered across the hillside appear like distinct, disparate splotches. I feel like I’ve never seen a smaller colony.

Our second zodiac cruise comes at Wilhelmina Bay. Although we don’t see any whales, spectacular glaciers, making their slow march into the sea, surround our journey among the azure-tinted icebergs. Again, I feel an immense sense of isolation, but it’s difficult to classify. I think the ice floes and gradually flowing glaciers distract me. I don’t feel cold or warm, happy or sad. I don’t feel anything. I am just in Antarctica, and there’s no other way to experience it.

We next sailed to Elephant Island, an almost mythical section of land, where the men of Sir Earnest Shackleton’s Endurance expedition stayed for five months in an upturned lifeboat while awaiting rescue. My father is a Shackleton enthusiast, so it’s only right that, on his first trip with his entire family, he successfully lands at Point Wild, the exact location where the men stayed. I land there too, but it doesn’t have quite the same meaning to me.

Our next destination is South Georgia, an island filled to the brim with wildlife and where Shackleton found his rescue. Landing on the beach is a difficult operation, not just because of the aggressive waves walloping the back of the zodiac, but also because of the hostile fur seals on the beach, looking to injure at any opportunity. They bark, but with trekking poles, we scare them back, brushing their whiskers with our pole-tips if they get too cuddly. But the moat of seals reveals an inner paradise of king penguins, who don’t nest. I sit down on a grassy mound and several walk up, one eventually pecks at my gumboot, and I get a quick photo. In the back of my mind, I worry that I’m not appreciating my environment enough, that I’m sacrificing an ephemeral experience for diminished but longer-term appreciation. But it’s too late: the penguin has walked on.

And so has our date with Antarctica. Although we departed from Ushuaia, our destination is now Port Stanley in the Falkland Islands. We land in Port Stanley and have a two-hour shopping excursion, visiting the store where my father had acquired so many penguin appurtenances, before staying one final night on the ship. At the captain’s dinner, the Russian captain gives a brief speech of congratulations and gratitude, a word-for-word copy of his speech on all previous trips, according to my father.

The next day, we are bussed to a military airport, where we hop on a LATAM Airlines flight to Punta Arenas, the Ushuaia of Chile, before hopping on another flight to Santiago, before flying back to America.

Reflecting on Antarctica’s absurd, bizarre brilliance makes me want to return. Each individual excursion is fascinating and exciting, but as a whole, the experience becomes a potent substance, an addiction that wracks the mind every day begging for another hit. I really miss it. Especially the penguins.