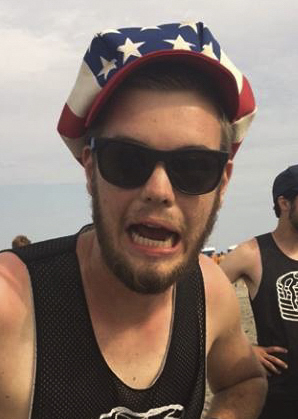 Jonas Powell ’18 is more than just the darling of the Wesleyan Athletics photography scene. The cheerful physics major also dabbles in motorsports, “cult-esque” musical groups, frisbee, brew club, and the world of entrepreneurship. His journey from beardless, jort-less first-year to the WesCeleb that Wesleyan now knows and loves all started with a hat.

The Argus: You’re often seen around campus with a frisbee and a strange, bulbous American flag hat.

A: Other frisbee teams too?

JP: Exactly! [Motions to Amabel Jeon ’19 and Matt Erodici ’19 of Vicious Circles Ultimate and Nietzsch Factor Ultimate, who are sitting nearby] Teams like Vish and Nietzsch are prime examples of how to ruin the fun in frisbee.

A: Is that on the record?

JP: Absolutely…But yeah, I think it’s good to be a little debaucherous, very silly, so I wear the hat at tournaments to make it clear to people I’m not there to be a competitive dick. And it really works! When I go to tournaments and don’t wear the hat, I get taken much more seriously, and the intense bros [on other teams] will match up against me and try to bro off with me. When I do wear the hat, they don’t feel as threatened and so everything is just nicer.

A: That’s such a genius, devious ploy.

JP: You’d be shocked how well it works. The hat was actually willed to me when I was a frosh by a senior, Max Owen-Dunow [’15]. So I’m working on finding a deserving freshman to carry on the tradition when I’m gone. I also have a pair of jorts that were passed down to me that will also have to be willed [to a future Throwbie], which really gives me a lot to think about. Mitzi [Adler-Wachter ’21,] I hope you’re listening.

A: You have a notoriously cute dog. Can you tell us about both Willie the dog and ‘Willie!’ the brand?

JP: Willie is a little Bichon Frise and Toy Poodle mix. He’s white, he’s about 13 pounds, he barks at coyotes a lot, loves to square up with labs, standing on his hind legs to get up on their level. He’s pretty silly. Anyways, in high school, my brother and I made a facebook dot com page for Willie called ‘Willie!’ and posted pictures and whatnot about him. Last year, by popular demand, we made a calendar where every month just featured Willie’s face to shine down on those who bought it.

JP: If the demand is there! Yeah, self-plug, if you want a ‘Willie!’ calendar check out the Facebook page and tell me. But yeah, it’s really convenient to have a cute dog when you take pictures a lot.

A: You aren’t involved with the Wesleyan music scene, but you’re going to New Haven later tonight to sing with people. Explain?

JP: I do this type of singing called shape-note singing. The notes, instead of being little ovals on a staff, are shaped, which enables you to sight-read really easily. It’s a traditional American four-part harmony type of singing that I’ve found to be really fun and cathartic. You’re singing in a circle and there’s never a concert or an audience, it’s very internal. You’re singing for yourself; it’s never like ‘grandma, come listen to me sing.’ There’ve been groups on-and-off during my time at Wesleyan, but they’re off right now, so I just drive to a sing that happens at Yale every week.

A: So, why do you think you’re a WesCeleb?

JP: Oh man, I don’t know. It’s funny because this is the shit I joked about when [I used to take pictures for] The Argus. I was always saying how I was going to quit so that I could be a WesCeleb. But yeah, I don’t know, I’m very smiley. I just smile at a lot of people and make friends with them that way.

A: Not because of your modes of transportation?

JP: Okay, that’s fair. So in my time at Wes I’ve had a longboard, I was a longboard bro for awhile. My brother made that and gifted it to me, which was really sweet. So I did that during my WestCo days. I’ve also had two motorcycles while I’ve been at Wes. I sold the first to my cousin and upgraded to the new one, which is bigger and bluer. Those have been nice to have for transportation purposes and have also just been amazing mental health pieces. Being able to go out and ride is an amazing feeling; there are a bunch of roads in the Durham and Higganum area that I’ll head out to for an hour or for four.

A: Do you bring passengers around?

A: Who handled it better?

JP: Well, they went on different bikes and took different routes for different amounts of time. It’s hard to compare.

A: Who did better?

JP: I refuse to answer that question! They were both really fun riders. I brought Carter to get a contact he needed at Atkins [Farm in Amherst, MA], it was 12:45 [p.m.] and I had a 1:20 [p.m. class], so we zipped down to Atkins and I got back at like 1:19. It was a blast. But I’m drinking a beer with Carter on Thursday, so I refuse to say anything bad about him as a passenger.

Editors Note: Powell’s tone made it clear that Joskow was a better passenger. The Argus also neither believes nor endorses the idea that Powell and Deane drove to, visited, and returned from a Massachusetts farm in 35 minutes. We suspect that he meant Lyman Orchards in Middlefield, Conn., but understand that this detail does not reflect well on Powell’s general veracity in this interview.