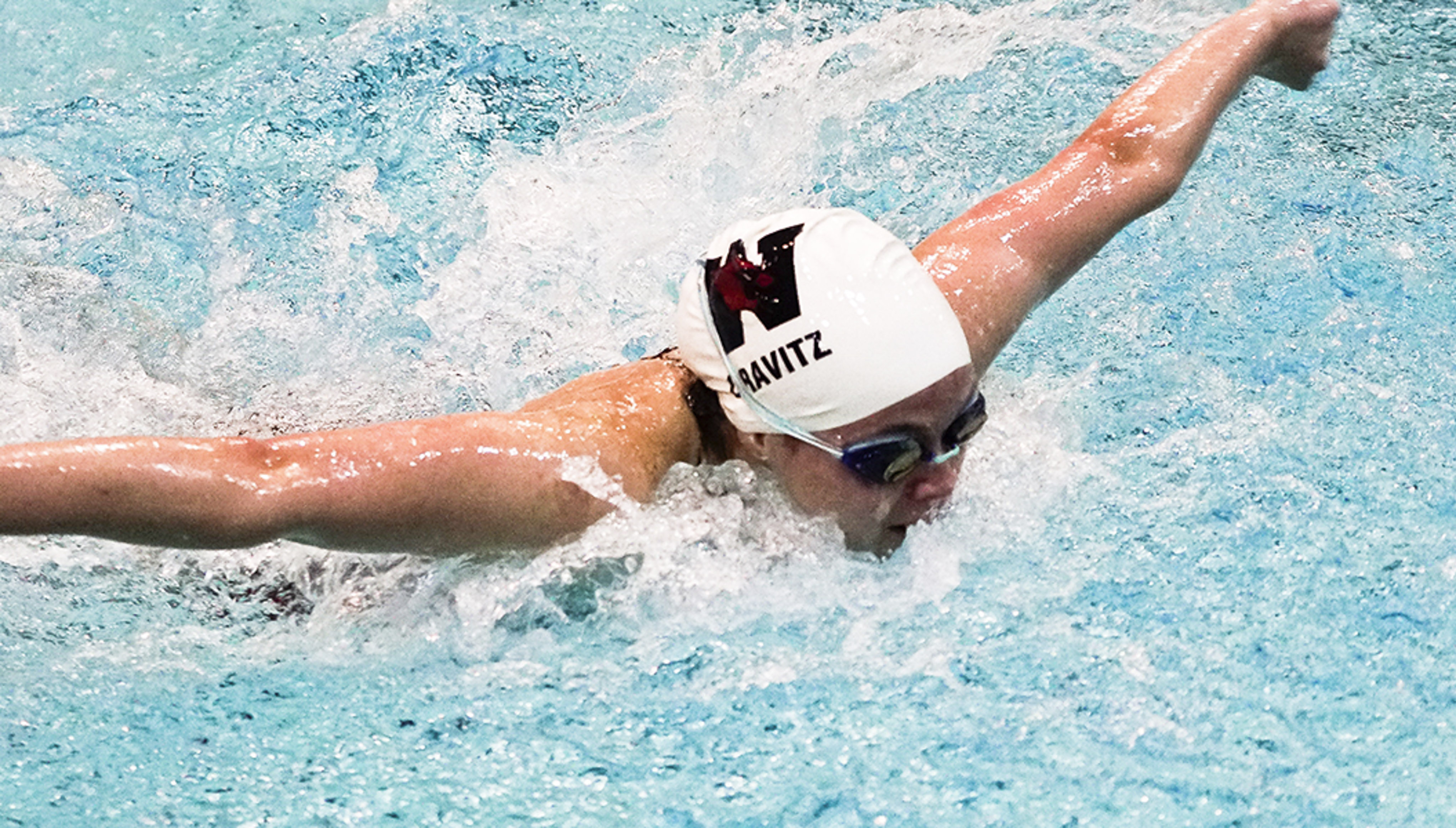 Most birds prefer not to be submerged in water, but the Wesleyan Cardinals are a different story—perhaps they would be more suitably referred to as the Wesleyan Penguins. In their first week of competition, the Wesleyan men’s and women’s swimming & diving teams have found some success in challenging meets versus NESCAC rivals.

Swimming for the women began on Nov. 18 at a dual meet versus Trinity and Bates in Lewistown, Maine. Caroline Murphy ’20, who was last year’s NESCAC champion in the 50-yard backstroke, picked up where she left off last season, capturing first place in the 100-yard freestyle in 54.44 seconds. She was directly followed by Zoe Darmon ’21 with a time of 55.27 seconds and Grace Middleton ’20 with a time of 55.95 seconds in third place. Murphy also was the champion in the 100-yard backstroke, winning the event in just under a minute. In a race double the distance, Hannah O’Halloran ’20 managed a second place finish in the 200-yard backstroke in just 2:11.22. Given their individual successes, it was inevitable that a team comprised of Murphy, O’Halloran, Darmon, and Middleton would take first in the 200-yard freestyle relay in just 1:40.28. One more individual highlight came from Maela Whitcomb ’19, who pulled out all the stops with her second place in the punishing 500-yard freestyle in a time of 5:26.55, just five seconds behind first place.

To achieve such stellar results, Murphy has followed a few pre-meet rituals.

“Headphones, water, and clementines; those three things are my keys to success in the pool,” Murphy said. “Also staying positive. When I’m super sore or stressed, it’s hard to stay positive, but the Barney Stinson ‘Get Psyched’ playlist does the trick usually.”

Women’s diving also found success against tough competitors at the Lewistown meet. Diving from the one-meter board, Emily Kessler ’18 and Devon Cooper ’19 took second and third place with scores of 200.70 and 172.95, respectively. Cooper wasn’t satisfied finishing behind Kessler, upping the ante at the three-meter, where she captured first place with a score of 205.87. Kessler took third with 195.91.

In spite of these individual successes, the Cards’ lineup lacked overall depth; while they thwarted the Trinity Bantams 185-110, they were unable to vanquish the Bates Bobcats, losing 171-119.

Although they didn’t have star swimmer Caroline Murphy, the men’s swimming team also did their best to emulate the aquatic speed of water birds, particularly with team rookies. Led by first year Phillip Wong ’21 in his debut meet, the men’s 200-yard medley relay, which also includes Alex Kapphahn ’19, Spencer Tang ’18, and Quinn Tucker ’20, took a marvelous third place in just 1:39.93.

“Swimming tends to be a very mental sport, where technique is important but not everything,” he said. “Mental strength is super important so getting in the zone is what I try to do before races. I listen to really loud music and just get excited before I go up to the blocks.”

Even with the rookies’ success, Wesleyan’s upperclassmen were not intimidated. In the 200-yard butterfly, captain Max Distler ’18 swam to third place in 2:05.01, while Kapphahn tied for third in the 50-yard freestyle in 22.33, and Tang took third outright in the 100-yard butterfly in 53.90.

Men’s diving at Lewistown was utterly dominant. At the one-meter board, Ethan Chupp ’18 and Brandon Pearson ’19 took first and second with 234.60 and 231.82 points, respectively. Similarly to Cooper, Pearson proved his love of heights by taking first place ahead of Chupp at the three-meter board, with respective point scores of 231.82 and 218.03.

After a single day’s rest, the Cards returned back to the pool for their second meet of the season versus Amherst. Back in their home dihydrogen monoxide, Murphy and O’Halloran proved their mettle once again with several top performances. Murphy took first place in the 50-yard backstroke in just 28.01, first in the 50-yard freestyle in 24.98, and second in the 100-yard freestyle with a time of 54.59. Along with captain Zoe Kerrich ’18, Whitcomb, and Middleton, Murphy also led the team to second place in the 200-yard medley relay in 1:51.10. O’Halloran, for her part, was victorious in the 100-yard backstroke in 1:00.35.

With no top diving results at the Cards’ home meet, the Red Birds failed to get the best of Amherst, ultimately going down 170-115.

On the men’s side at the Cards’ home meet, first years once again stood out, proving that their debuts were far from flukes. Facing stiff competition with a likely tired body, Wong took second place in the 100-yard backstroke in 54.38 and third place in the demanding 400-yard IM in 4:21.21. Just ahead in the 400 IM was Lindheim-Marx, who took second place with a time of 4:20.12. In addition, Lindheim-Marx was also a runner-up in the formidable 500-yard freestyle, touching the time-sensitive final wall at 4:57.58. Not satisfied with just those podiums, Wong, Lindheim-Marx, Tucker, and Aidan Winn ’18 managed a third-place finish in the 400-meter freestyle relay in 3:22.78. These superb results are, of course, nothing to scoff at, but the feather in the Cardinals’ caps came with Kapphahn’s first place in the 100-yard IM, where he finished in 53.82. Kapphahn also took strong second places in the 50-yard freestyle and the 50-yard backstroke, where he finished in times of 22.21 and 24.60, respectively.

After trading the top spot with Chupp in Lewistown, Pearson decided he wanted the crown for himself; the junior took first place at both the one-meter and three-meter heights with respective scores of 240.90 and 255.60. Not far behind, Chupp took third place at both heights with 223.27 points at one meter and 214.27 at three meters.

But once again, excellent performances from individual Cardinals failed to overcome the team’s ultimately shallow lineup. The Red Birds fell to Amherst 161-126.

For a top swimmer like Murphy, strong individual results in the midst of team disappointments can lead to arrogance and conceit. But her formative years have grounded her perspective.

“I started from a very small, underfunded team, so I never really saw myself as a big-time swimmer, I guess,” Murphy said. “I also think it’s more rewarding to be humble or thankful rather than boast and be over the top.”

This mindset is clearly beneficial to maintaining motivation throughout the season. But O’Halloran looks outward, rather than inward.

“The thing that motivates me most, especially during harder practices, is knowing that the whole team will be practicing together and…when we’re swimming fast at NESCACs, it will have been worth it,” O’Halloran said.

“Consistent hard work both in the pool and the weight room as well as plenty of sleep are huge factors to swimming well,” he said.

Both the men’s and women’s swimming and diving teams now have time to relax, recuperate, and train before their next meet. Alongside rowing crew, swimming is one of the most physically arduous college sports, so the Red Birds need all the rest they can get.

The Cards will be swimming in front of crowds again at the CT Cup Meet on Saturday, Dec. 2. Hopefully, this time they can complete the transformation from Cardinals into penguins.