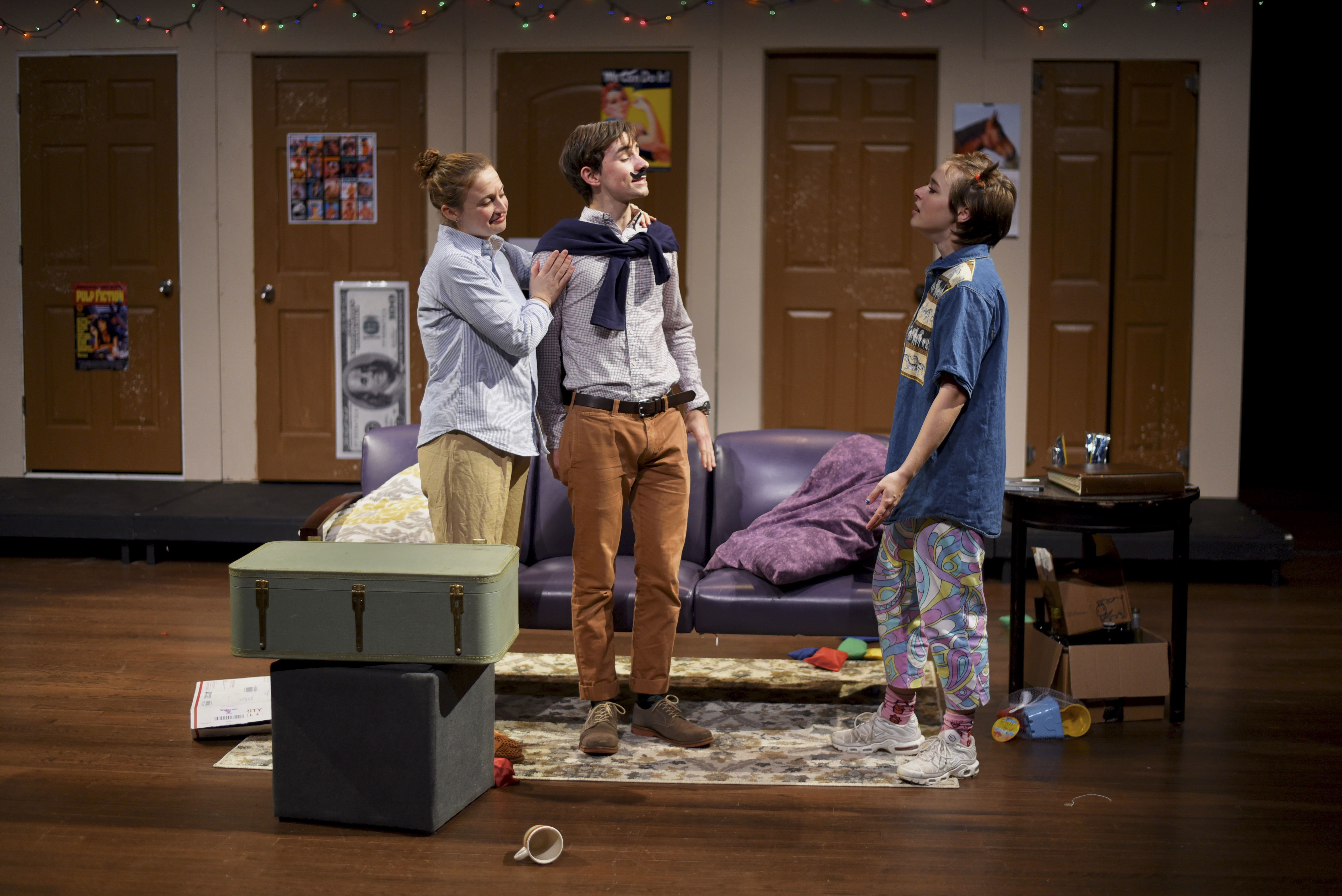 Are you a fan of “How I Met Your Mother,” “That 70’s Show,” “It’s Always Sunny in Philadelphia,” “Much Ado About Nothing,” “Twelfth Night,” “A Midsummer Night’s Dream,” or “Comedy of Errors?” If you answered no, who are you and what DO you like? If you answered yes, though, you will love “The Rumpus Room,” a play written by Nathan Krieger ’20 and Augustus Viveiros, debuting at the Patricelli ’92 Theater Nov. 16-18.

The play opens on a scene familiar to us all: the common room. It is backed by five doors belonging to our madcap cast of characters. First up is Pete, who has an excellent body but an awful personality. Try as he might, even his parents call him their “horrible son,” among other insults. Then, there’s Terry, the epitome of a bro—he wears a backwards baseball cap, yells gross and dumb things at the top of his lungs, and, of course, is an Econ major (In a particularly telling line, he yells, “Get your freak on with an econ!”). Next is Kayla, a loose cannon who has nothing to prove to anyone. Her neighbor, Laura, is the Fairy Puck of the play, an adorably evil mastermind who wreaks mischief in order to orchestrate the play’s chaos and hilarity. These lodgers are overseen by Ray the RA, an odd fellow who, according to the characters, may in fact be two toddlers wearing a trench coat.

The final door, located on the far right of the stage, is the rumpus room. Only Kayla is allowed in there, and the rest of her roommates have no clue what goes on inside. The one who perhaps would most like to know is Pete, who is falling for Kayla. Laura hatches a brilliant plan to find out what’s in there, which entails Pete pretending to be his own identical twin in order to score with Kayla. While Laura’s brilliant scheme is unfolding, Terry’s own mastermind plan to sell alcohol to minors grows in both complexity and stupidity. Meanwhile Pete, in an attempt to legitimize the visit of his sexy “twin brother,” tells Kayla that his parents are coming to town. The two mean and insane parents join our cast of characters, and, of course, even more hilarity ensues.

Krieger, who is directing in addition to writing the script, and co-director Maxwell Halperin ’20 have assembled a firecracker cast that is sure to have you roaring with laughter.

“This cast has been a ball and a half,” Krieger said.

Kimberly Wipfler ’21 is somehow both lovable and evil as the troublemaker Laura, while Willis Weinstein ’20 plays Terry so convincingly he may even make you hate him—but you will love every minute of it. Gabe Leeman ’20, playing our poor Pete (and his own identical twin), delivers charming awkwardness on the level of Eric Forman. You will feel for him, but also revel in the brilliantly curated schadenfreude of his storyline. Avery Pedell ’21, who appeared just last week as sweet and shy Audrey in “Little Shop of Horrors” has skillfully transformed in this production into self-defined “loose-cannon” Kayla, who eats jerky and sends snapchats on the toilet. Meanwhile, Alex O’Shea ’19, fresh off a dramatic and tear-inducing role in “Stop Kiss” earlier this semester, plays a raucously funny, off-her-rocker, mother, demonstrating jaw-dropping theatrical range. She is matched by her stage husband, Miles Brooks ’20, whose spot-on comedic timing will certainly get chuckles out of you. This cast of actors is a veritable tidal wave of top-notch comedy not worth missing.

The fabulous comedy is punctuated by the hard work of the phenomenal crew. Everything down to the set of horse calendars and Rosie the Riveter posters encapsulates the spirit of the college student lodging, in addition to expertly navigating the challenges of a heavily door-based set. The soundboard adds an extra layer of humor, emitting everything from angelic choirs to the Seinfeld theme.

The result of the wonderful cohesion is beautifully silly play that provides an escape into pure, unadulterated humor.

“This show is hilarious, very silly, and very fun,” Halperin said. “I think one of the cool things about farce is if it really does its job, it really makes an audience feel good and forget about what’s going on in their lives for…in this case, 95 minutes.”

The humor of the show is refreshing and cleansing, a unique installment in the realm of Wesleyan theater.

“I don’t think shows like this happen at Wes that much,” Krieger says. “I haven’t seen too many shows that are just purely nonsense comedies where you can just come and laugh your guts out and nothing is happening and it just takes your mind off…maybe everything in the world if you want that.”

The strange contradiction that arises is that, while shows as purely funny as “The Rumpus Room” are so rare on campus, they are perhaps the most relatable.

“I think it’s a really honest piece of student theater,” said Weinstein, who plays Terry. “I think it is really geared towards a college audience and I think a lot of the humor is something people at Wesleyan can identify and relate to.”

The show is certainly relatable even in its over-the-top silliness, which makes it even better. It’s like watching regular college life, but with even more laughs.

“Laughing for its own sake is absolutely worthwhile,” Krieger points out, “and I think sometimes there’s not enough of that.”

Give yourself a good laugh, and check out “The Rumpus Room” this Friday and Saturday at 8 p.m.