A Look Into USLAC’s “Behind the Scenes” Activism 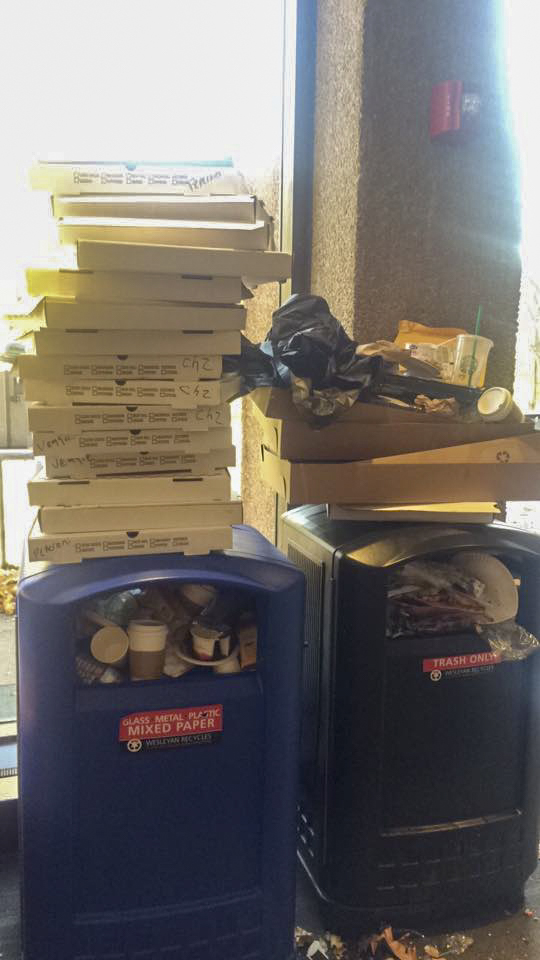 In times of unrest, demonstrators often take to the streets with cheeky signs at the ready, expressing stances that reflect the particular debate at hand. But what happens after marchers reach their destination, when the performance of opinion falls out of vogue? For activists like those of Wesleyan’s student-run United Student Labor Action Committee (USLAC), the trends of national discourse serve only as a backdrop to the intimate actions of labor solidarity that they perform on a regular basis.

USLAC, a horizontally integrated labor organizing group at Wesleyan, has been active on and off since its founding in the 1990s. The group consists of 10 to 15 members working out of the University Organizing Center (UOC). The closest it comes in terms of hierarchy is in the selection of point people, or individuals that take charge over certain actions that strive toward support of and solidarity among service workers on campus.

Sophie Martin ’19, one such point person, is actively involved with Bon Appétit workers.

“My role right now is being the liaison in many ways between the union Unite Here! and Local 217 which represents our cafeteria workers, as well as workers in Weshop and Pi,” Martin explained. “I worked for them over the summer. I was a paid organizer for the union and now I’m more on a volunteer basis, doing a lot of internal organizing especially at Wesleyan.”

Unite Here! represents 270,000 workers across the United States and Canada, spanning various industries. Local 217 is a smaller scale affiliate of Unite Here!, focusing on labor rights organizing in the hotel, food, service, and gaming industries in Connecticut and Rhode Island. While the 217 workers on Wesleyan’s campus have yet to undergo contract negotiations, USLAC has been involved with affiliate schools throughout the fall.

“Right now with 217, most of the focus has been with Central Connecticut State University [CCSU] because their contract is currently being negotiated and has been for a couple months now,” Martin said. “There’s Sodexo [CCSU’s subcontractor] and they’re refusing to budge on certain things like health care. The reason why that’s scary is because if labor standards at CCSU fall, healthcare at every other school will fall after that.”

If one union affiliate lowers the standards and benefits of their contract, Martin and others at USLAC fear it would serve as a precedent for schools like Wesleyan, which is set to begin contract negotiations in the coming months for the first time since 2014. USLAC members have traveled up to CCSU’s campus to take part in demonstrations this year.

“[Groups like USLAC] are fairly rare on most campuses in the U.S.,” Martin said of her experiences collaborating with CCSU students. “They’re not that common with such an explicit purpose as labor solidarity. [CCSU] has some leftist groups. They also have a Black student association, Muslim student association. These types of affinity groups have a lot of the same members, and also have been willing to come out on the student side, so getting petitions signed, show up to pickets, stuff like that which is really important.”

Martin has also been working with other Unite Here! partners like Local 33, the under-threat graduate employee union at Yale.

Emma Llano ’19 is also a USLAC point person, who’s worked closely with the custodial workers of Wesleyan’s subcontracted cleaning service, Service Management Group (SMG). Just as Sodexo hires and negotiates contracts with the 217 at CCSU, custodial workers at Wesleyan are hired through SMG. Llano and Andrew Fleming ’20 have been meeting with workers on a weekly basis to discuss labor standards.

“A lot of them feel that they’re overworked, that they have too much to do,” Llano said. “What we’ve been doing is trying to find a way to get one more worker hired so that they can distribute the workload in a better way.”

Llano has been worried, since she and Fleming are leaving next semester, over who will pick up the slack they leave behind. Due to USLAC’s horizontally minded philosophy, the delegation of duties and responsibilities is not so black and white.

“We’ve found that it really helps to have somebody who spoke fluent Spanish—which was me—in terms of improving SMG to Wesleyan relationships or SMG-USLAC relationships because if you’re not a native Spanish speaker it’s hard to navigate feelings and dialects,” Llano said. “There’s a couple of freshmen who are interested.”

Indigo Cochran ’21 and other underclassmen have begun shadowing Llano and Fleming with hopes of continuing their work.

“I’ve been doing a bit with SMG,” Cochran said. “I’ve started to attend the meetings.”

A lot of the campaigns that Llano and other USLAC members participate in involve this kind of work: drafting emails, talking to workers, and filing for budget requests.

“When people find out that I’m involved with SMG a lot of people are passionate about how to help service workers on campus,” she said. “It’s not really as much of typical activist marches and posters and protests. Not that those aren’t useful, but the main way that people can help SMG workers is just by talking with them. Don’t treat them as different from Wesleyan students. The main thing would be clean up after yourself and hold your communities accountable for cleaning because that makes their job so much easier. Even though that’s not seen as a typical route for activism, if we keep our kitchen spaces clean, if we keep our living spaces clean it makes SMG workers’ lives easier.”

Gemma Shay ’18 has attempted to start an action against Weshop berry provider Driscoll. They also spoke to the less-commonly thought of channels that USLAC’s activism operates through.

“In terms of getting funding for things, like dealing with the WSA and contracts, I’ve been doing most of that,” Shay said. “The other day, Indigo and some other people came and watched me fill out a budget request.”

Shay, Cochran, and Joy Ming King ’20 among others at USLAC have begun to address concerns over Driscoll’s labor treatment.

“Driscoll’s–the berry company–their suppliers, pay their migrant workers very little,” King said. “That started with the farm workers’ union in Washington State since 2015 but recently they resolved their situation by negotiating a new contract with their supplier for Driscoll’s berries. However, there are still some workers in Mexico that have unfair conditions… Right now we’re working with the [Wesleyan Student Assembly’s] Dining Committee to ask the managers of Weshop to not use Driscoll’s berries. They don’t seem too favorable. We may have to take next steps to escalate the action.”

Such an escalation would take the form of an all-campus boycott, not unlike the campaign raised in 2014 over Weshop’s stocking of Sabra Hummus.

In terms of future actions beyond the Driscoll’s berries fight, younger USLAC members have begun to address other labor standards concerns. One in particular, according to Cochran, is for parking access. Many workers in Usdan have been forced out to lots like the one on Vine, and have claimed instances of unnecessary ticketing.

“That really isn’t fair for people who do a lot with their bodies during their shifts or have arthritis,” they said. “Why are we ticketing those people when we could be doing more important things? Those are the people who run this place.”