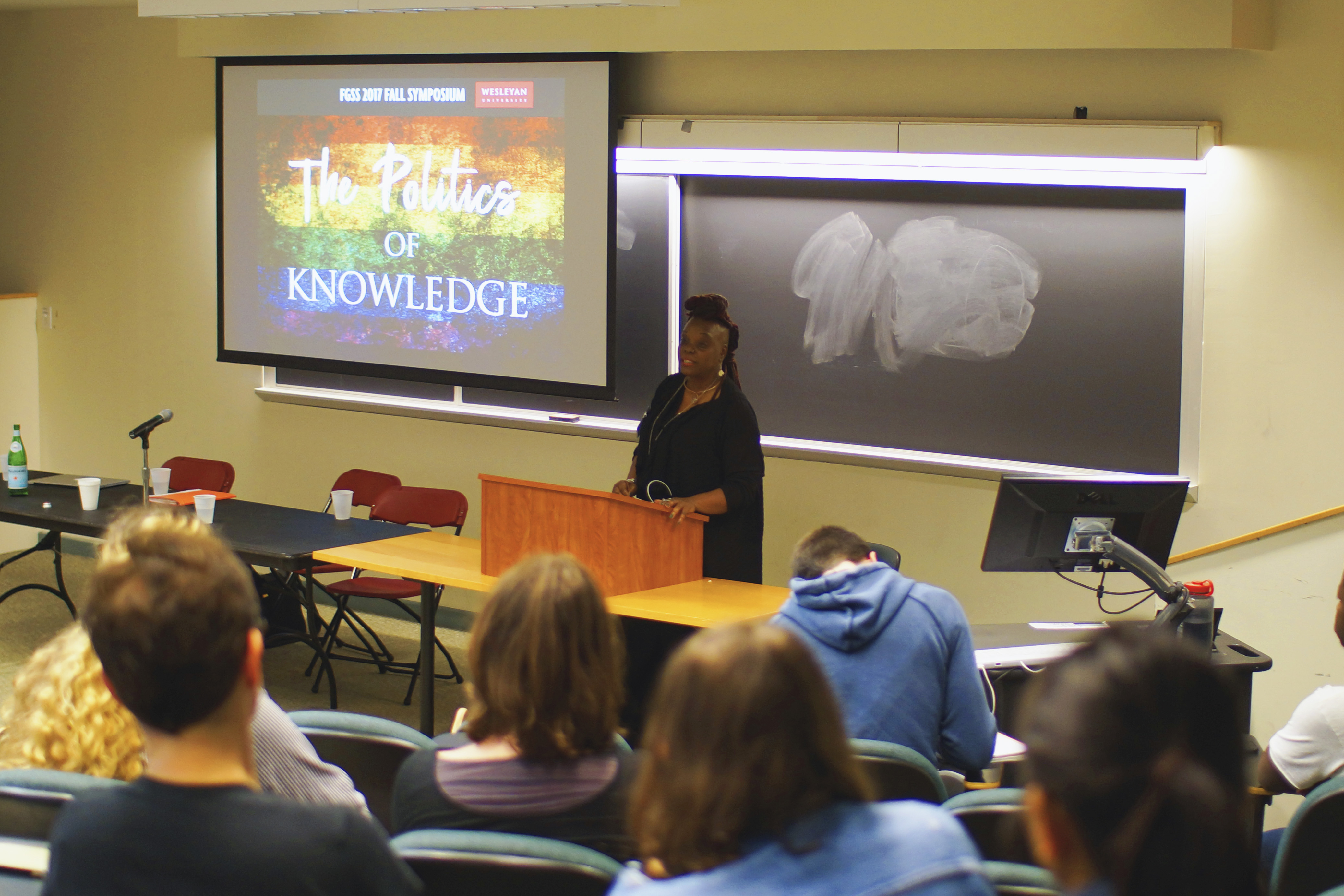 On Friday, Nov. 3 at 3:30 p.m., the Feminist, Gender, and Sexuality Studies (FGSS) Program hosted its Annual Fall Symposium, subtitled “The Politics of Knowledge.” Deborah Cohler ’91, Hope Dector ’02, and Vashti DuBois ’92 each lectured on their careers. Assistant Professor of Sociology Abigail Boggs ’02 moderated the event, which took place in the Hansel Lecture Hall (PAC 001).

DuBois, who double majored in FGSS and theater, presented her talk “The Colored Girls Chronicles.” She is the founder and executive director of the Colored Girls Museum, located in Philadelphia’s Germantown quarter. The museum honors the work of ordinary black women, which DuBois said have received inadequate attention throughout U.S. history.

A video introduced the museum’s mission and displayed clips of past exhibitions. Interspersed were relevant statistics, such as studies demonstrating that black women suffer from a higher breast cancer mortality rate than their white counterparts, despite a lower incidence rate. The video was set to Imani Uzuri’s “Beautiful.”

DuBois matriculated at the University in 1979 but soon dropped out. In keeping with the museum’s aim to honor the labor of ordinary black women, DuBois sang the praises of her friend Diane. It was Diane, she told the audience, who would motivate her ten years later to resume her studies at the University.

“It seemed only natural to me to return and finish the degree that I had started ten years ago,” she said of returning to campus as an older student and single mother. “[Because] I saw somebody who looked like me do it.”

DuBois went on to receive her degree in 1992.

She then described what she considers the daily heroism of her friend Diane.

DuBois relayed Diane’s response, in which Diane began by recalling that for the majority of the U.S.’s existence, acts like the rape of black women weren’t considered illegal.

“I can’t set all things right, but I can be that person who hears that story, who does that test, who is that woman for somebody else,” Diane said, according to DuBois.

“She’s not Michelle Obama,” DuBois said of her friend. “She hasn’t climbed Mt. Everest. But her contributions as an ordinary colored girl, doing this extraordinary work, which makes the world we live in a little better every day, should be documented—not just at the Colored Girls Museum, but here at the place, she graduated from with two children. She’s a powerful example of what people do with a Wesleyan education [when it’s] paired with passion and commitment.”

DuBois closed her talk by situating her experiences at the University within the context of her lifelong passion.

“I was a Woman’s Studies major before I declared a major at Wesleyan University because my passion, my concerns, have always been with the needs of women—in particular, the needs of black and brown women,” she said. “So that’s what I did with my Wesleyan education.”

Cohler spoke next. She is a professor of Women and Gender Studies at San Francisco State. Her scholarly interests include the relations between gender, sexuality, race, and nationalism. She is currently writing a monograph about cultural representations of American military spouses at the turn of the twenty-first century. She studied English and FGSS at the University.

Cohler’s talk was titled “Uses and Misuses of Intersectionality.” It responded to the Wall Street Journal opinion piece  by President Michael Roth ’78 from May, titled “The Opening of the Liberal Mind.”

Cohler said the most influential training she received from FGSS and the University was not related to a particular text; it was instead the skill of performing close, critical, and contextual interpretations of any encountered text. She said her talk on Roth’s opinion piece was yet another application of this preparation.

Cohler’s response drew from Kimberlé Crenshaw’s seminal 1991 article on intersectionality, “Mapping the Margins: Intersectionality, Identity Politics, and Violence against Women.” She explained that Crenshaw’s theory was in part a response to the erasure of black women’s experiences in both black and feminist social justice spaces of the 1970s and 80s. According to Cohler, the article spoke to the negative effects women of color had materially and ideologically experienced due to the failure of most frameworks to acknowledge the multiple “vectors of discrimination” they uniquely faced.

“[Intersectionality is] a framework and a method for understanding the imprecation of fields of difference in one another, and the structural, political, and representational violence that occurs against members of subordinated communities when those fields are not considered together at that intersection,” she explained.

Cohler acknowledged that the concept may apply to other identities apart from gender and race, like national origin, religion, or ability. But, she emphasized, such applications should not be taken for granted.

Having laid out the groundwork of Crenshaw’s theory, Cohler then turned to Roth’s opinion piece.

“To create deeper intellectual and political diversity, we need an affirmative-action program for the full range of conservative ideas and traditions,” the piece reads. “[O]n too many of our campuses they seldom get the sustained, scholarly attention that they deserve.”

The flaw in Roth’s opinion, said Cohler, is that it fails to consider power relations when applying the concept of intersectionality to conservative, libertarian, and religious thought.

“What’s notable to me about the rhetoric of this piece is its redeployment of the language of the political left in service of a neoliberal framing of politics on campus,” Cohler said. “A call for ‘an affirmative action program for conservative, libertarian, and religious modes of thinking’ ignores the history of affirmative action as a structural remedy for historic exclusions of people of color from higher education—and, let us not forget, equates the legacy of slavery and codified racial exclusions with contemporary political differences.”

“Power matters; context matters; words matter,” she continued. “Retaining the knowledge of how to trace the ways in which words and concepts, from free speech [to] affirmative action to intersectionality, are appropriated, misused, and transformed for various political means remains one of the foundational knowledges that has served me politically and intellectually since [my time at] Wesleyan. So thanks, Wesleyan.”

Roth’s piece has received similar criticism. Earlier this fall, the Center for African American Studies Advisory Board published a letter to the editor titled “Affirmative Action(s).”

Hope Dector ’02 spoke in a final talk called “Art as Care.” Dector began their work at the Barnard Center for Research on Women only days after graduating from the University with a double major in Studio Art and FGSS. They explained the center’s mission through the words of Angela Davis, who recently expressed that some forms of knowledge are only attainable through political activism.

“It’s a personal thing,” Griffin-Gracy says in the video, which is set to animation. “You know, this group stuff is nice, and yeah, we have to get together and work on abolishing what’s going on. But the personal stuff is what gives you the strength to go forward.”

A second video followed, this one produced by the activist-in-residence Dean Spade. Titled “Ky Peterson—Survived and Punished,” it tells a story of injustice. In it, a narrator tells the story of a black transman named Ky Peterson who is knocked out on a walk home from his grocery store in Georgia. He soon wakes up in the midst of being raped. According to the video, Peterson had previously been raped in his neighborhood but had encountered a refusal to investigate from local police. Peterson shoots and kills his attacker with a gun he had begun carrying for self-protection. The narrator explains that due to Peterson’s past experiences with local police, he chose not to report the incident and instead disposed of the attacker’s body. Results from a rape kit and DNA evidence corroborated Peterson’s story. Local police, however, again approached Peterson with skepticism. The body was discovered, and Peterson was arrested.

“You don’t seem like a rape victim to me,” an officer is reported to have told him.

According to the video, Peterson’s public defender encouraged him to accept a plea deal in part because Peterson is black and “looks stereotypically gay.”

Peterson pled guilty to involuntary manslaughter, which carries a maximum sentence of 10 years under Georgia state law, but was sentenced to 20 years in prison, 15 of which must be spent in solitary confinement.

The story has inspired a letter-writing campaign to the governor of Georgia.

During the symposium’s Q&A, an audience member expressed surprise at a perceived lack of minority representation even within the University’s most progressive departments like FGSS and Sociology.

Another audience member, a first-year student from China, noted that the presenters had failed to mention Asian and Asian-American women at all.

Cohler mentioned the San Francisco-based Asian Women’s Shelter, which aims to assist women, children and transgender survivors of domestic violence and human trafficking. According to its website, the shelter especially seeks to help immigrants and refugees.

Cohler also discussed a Bay Area transliteration series that highlights art by and about trans people of color. The series included a number of Asian and Asian-American artists.

An alumni reception followed upstairs. This year the department celebrates its 40th year. Women’s Studies began at the University in 1977 and has since graduated almost 300 majors. Contributions from Diane Weiss ’80 supported the event.