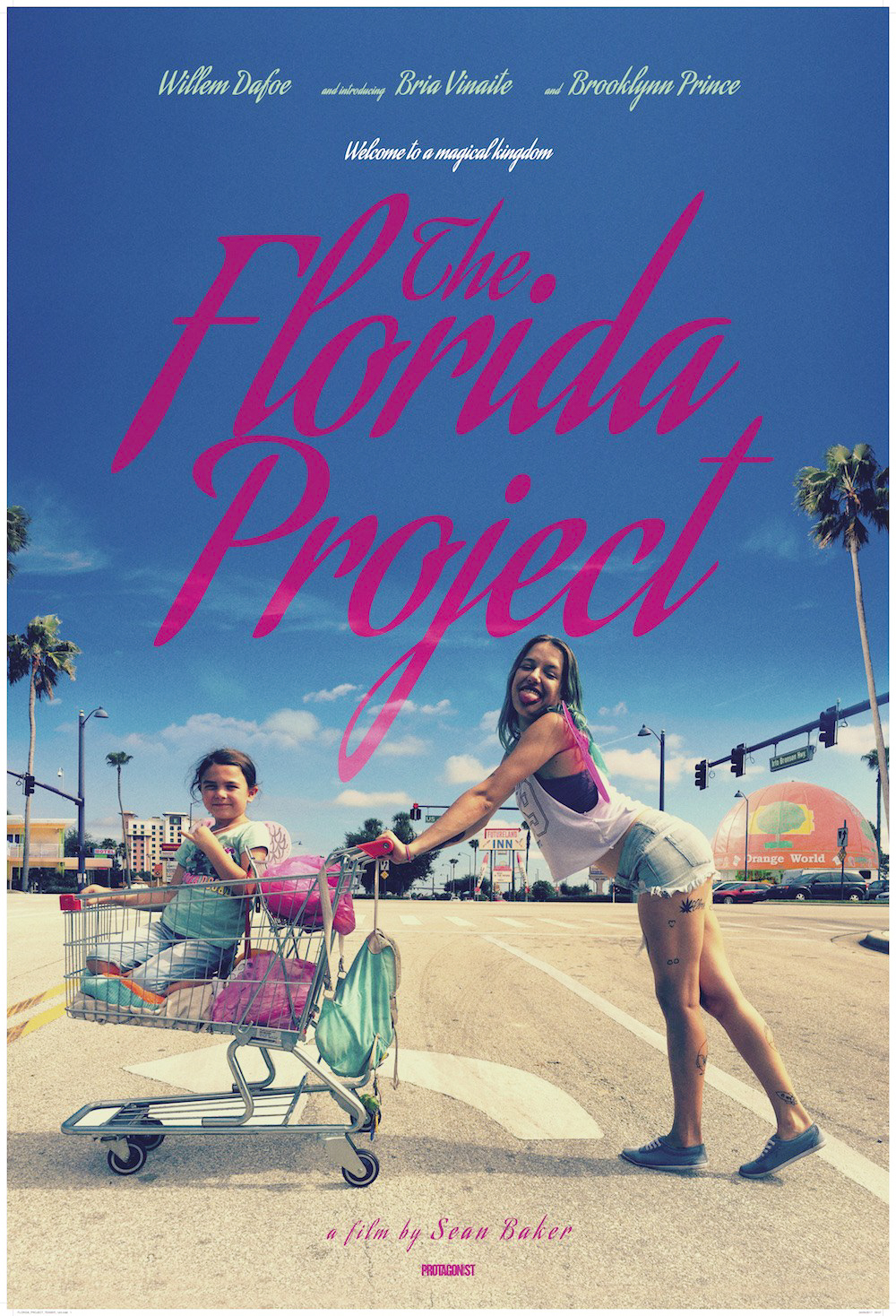 In one of the strongest scenes of “The Florida Project,” a young mother hitchhikes with her kindergarten-aged daughter and her daughter’s friend along a strip of Florida highway littered with strip malls, helicopter landing pads, and stores selling cheap Disney trinkets. Unable to afford a large birthday party for her daughter, Halley has opted to celebrate her young daughter’s birthday on the outskirts of Disneyland, where the trio watches fireworks and lights a candle on a cupcake. At the end of the short sequence, bright red lights explode in the night sky, illuminating the children’s faces, and the world careens into a makeshift, spectacular beauty.

It’s these kinds of revelations, combining economic desperation with childlike wonder, that makes “The Florida Project” a joy to watch. The film follows everyday lives of people living in “The Magic Kingdom.” No, you won’t see Aladdin’s or Elsa’s painted in the hallways: The Magic Kingdom is a cheap motel living in the shadow of Disneyland. But it’s also the makeshift home for a community of people who live there full-time. Because for them, it’s the only place to live. The motel’s name is an ironic twisting of the knife for tourists scammed into buying rooms there. And yet, there seems to be a different sort of enchantment at play within the motel’s walls. While the bright purple walls and faux-castle architecture might seem tacky to some, to the children living there, it is a land ripe for exploring.

Navigating the hallways of the motel is Moonee (the delightful Brooklynn Prince), a rambunctious kindergartener who’s having one of those perfect summers of fun. Tagging along with her is Scooty (Christopher Rivera), whose mother Ashley (Mela Murder) sneaks them free waffles from the diner where she waitresses. Their newest recruit, Jancey (Valeria Cotto), comes from the motel across the street. Moonee and Scooty take their time showing Jancey the ropes of their operation: wandering around abandoned condos, asking strangers for money at ice cream stops, conducting “science experiments” that consist of trying to revive a fish by placing it in a pool, and spitting on people’s cars. The children’s adventures are rife with a rebellious streak that transcends their lack of resources. Even though it isn’t the real Disneyland, it feels like it for these children. One of the most striking images of the film shows Moonee and Jancey eating peanut butter and jelly sandwiches on a huge overturned tree. It’s a destroyed Eden, but a beautiful one.

Part of the delight—and despair—of the film is seeing the children’s world of innocence reaching for and being invaded by the adult world. Sometimes, it’s hilarious, like when the children take a peek at one of the female motel residents lounging by the pool topless. But more often than not, the adult world comes crashing into the children’s lives. Moonee’s mother Halley (Bria Viniante), arguably a young girl herself, struggles to pay rent and provide for her child. With floral tattoos on her chest, multiple piercings on her face, and turquoise-streaked hair, she’s not your typical vision of motherhood. As much as she’s Moonee’s mother, there’s a sisterly dynamic between the two, both young, resilient, and just scraping by. However, we see the maternal devotion Halley exhibits as their situation becomes more and more dire. Halley will do whatever it takes to preserve Moonee’s innocent world, even if that means stealing, lying, and putting herself in dangerous situations. Valiente plays the part expertly, possessing an uncanny knack of showing both naïvete and wisdom, not to mention a consistent emotional presence throughout the entire runtime.

The father figure to Moonee, Halley, and all of the occupants of the motel is Bobby (the only famous actor on the call sheet, Willem Dafoe). Most of my generation, including the young actors of the film, know Defoe as the Green Goblin from the original Spiderman trilogy, so it’s thrilling to see him inhabit a role completely devoid of the menace his parts usually demand. As the manager of the motel, Bobby is a calm voice of reason and meditation in a world that occasionally spirals out of control. He does all the practical roles required by his job: making sure rents are paid, throwing bed-bug ridden mattresses into the dumpster, repainting the walls of the “castle.” And yet he is so much more than that to this group of people. He’s a reluctant one-time benefactor to Halley, a steady playmate to the children, and, along with the other mothers, the children’s protector from the outside world. Dafoe plays him with a watchful, caring, yet saddened eye. Despite his reservations, Bobby can’t keep his distance—both physically and emotionally—from the community.

In fact, Bobby can be seen (and often is, by critics) as a characterization of Sean Baker, the film’s co-writer, director, producer, and editor. As an editor, he’s incredibly skilled at achieving a naturalistic tone. Besides the opening and ending sound cues, there’s virtually no scoring at all in this movie except for songs played on character’s phones. But the fluidity of Baker’s sequencing makes the movie lyrical in ways that transcend its auditory sparseness, moving gradually from observational to intimate in such a way that gives viewers the perspective of its characters.

The screenplay, which Baker co-wrote with Chris Bergoch, follows a trajectory that, similarly, humanizes its characters as it progresses: while the film starts out as a slice-of-life look into this world, the emotional stakes are continually raised throughout the film so effortlessly that by the time devastating events occur, they only seem inevitable. We want to see these characters united despite understanding the desperation of their situation. We care deeply about them despite being absolute strangers in the beginning.

But it’s his role as director where Baker achieves something completely original. Some directors might look at the real-life motel where this film was shot and see a documentary or anthropological study waiting to happen. But Baker cares too much about the people living in this environment to watch critically at a distance. By crafting a story with these actors, he is able to pull his audience into a state of deep understanding. This is deeply empathetic filmmaking. His casting choices are equally important: the children actors are from the Florida area, and he found Valiente through her Instagram account. Baker has become known for his innovative modes of film production: his last film, “Tangerine,” was shot completely on an iPhone camera. But here, he blurs the lines between reality and fiction completely, creating a dynamic between Dafoe, Valiente, and the child actors that mirrors that of their characters in the movie. The result is a fictional film that stunningly feels like people’s real lives.

Though I hate to throw the term “Oscar buzz” around “The Florida Project,” it’s impossible not to see this film within the framework of other award-winning indie films of the past few years. The premise of a scrappy, ragtag community in the American South led by a fierce young girl to an affirmation of their alternative lifestyle is unmistakably reminiscent of “Beasts of the Southern Wild.” The unbreakable bond between Moonee and her mother recalls that of Jack and Ma in 2015’s “Room”—in both, a mother has to enact a fantasy world while living in suffocating conditions. But if anything, “The Florida Project” is the aesthetic and emotional successor to last year’s Best Picture winner, “Moonlight.” Both films represent communities in Florida that face unimaginable oppression, yet fill them with characters so achingly alive and are filmed to capture the area’s vibrant, humid life. There are moments of unmistakable beauty in both as well: just like the water baptism scene in “Moonlight,” a sublime scene of playing in the rain toward the end of “The Florida Project” cleanses and heals the characters. But while the story of Chiron in “Moonlight” was internal and repressed, the tale of Moonee and her friends is a liberating opposite: it’s bursting with externalized joy.

“The Florida Project” may seem like a small film, but it’s ambitious in its thematic scope. The film attempts to weave childhood simplicity into the larger socioeconomic forces affecting the community. In less skilled hands, either one of these could be disastrous: the childhood scenes precocious, the dramatic heft overly manipulative. But Baker’s film is a wonderful alchemy of both forces, particularly in its ending, which is a vastly different than everything preceding it and asks audiences to recontextualize the entire story.

But overall, this film is one of the most original, emotional, and surprising of the year. Its title, which was the codename for Disneyland when it was under construction, is the perfect fit for a film about the construction of an entire world for children. The reference to the theme park’s construction, a corporate Heaven on Earth being built brick by brick, poses the Magic Kingdom Motel—and the film itself—as an alternative to the luxury and abundant wealth implicit in Disneyland’s mere existence. Baker astounds us with a simple story, a cast of virtually all unknown actors, and one real-life locale. “The Florida Project” doesn’t achieve wonders in spite of limitations—it achieves wonders because of them. It’s a magical film to witness.