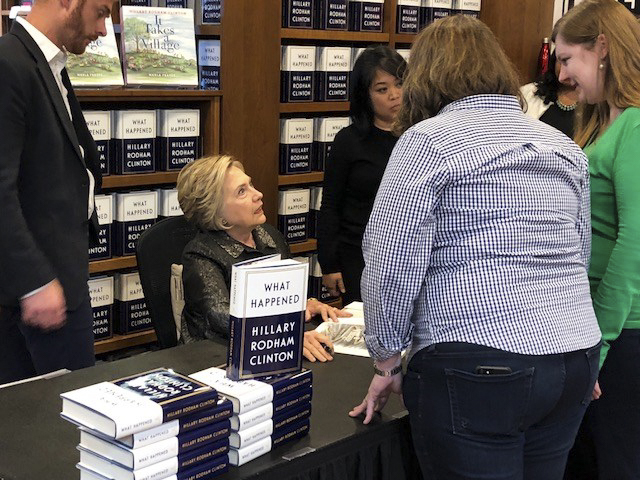 “It didn’t hurt that it was a gorgeous day,” attendee Gretchen Teran said.

On Saturday, October 21st, Middletown residents, University students on fall break, and out-of-towners alike waited for three hours outside of R.J. Julia to meet former Secretary of State Hillary Rodham Clinton and have her sign their copies of her newly released memoir, “What Happened.” Although the event wasn’t set to start until 11 a.m., the crowd began to gather around 8 a.m., according to an R.J. Julia employee. “What Happened” is Clinton’s recollection of the 2016 presidential election and features anecdotes about her time on the campaign trail. It places blame on several parties for her eventual loss, including herself.

The hundreds of ticket holders displayed a sense of civic duty, electing to make the signing their morning’s priority. A woman in line made a call to push back an appointment four hours and hoped that she would be on time. One line-waiter expressed excitement in noticing that a great portion of the attendees were younger, first thinking that it would be dominated by an older crowd; young mothers waited with their young children, and young adults waited with their friends. This Argus reporter entertained herself by chatting with her neighboring waiters and by counting all of the sidewalk blocks between her place in line and the entrance and then dividing it by the time it took to move five (the estimate, it turned out, was entirely accurate after assuming that it was wrong and adding 20 minutes to it). The most surprising quality of this line-waiting was the apparent patience that the ticket holders maintained. Complaints arose only about the sun beating down, but as time passed, the shadows from Middletown’s buildings protected the backs of everyone’s necks.

The patrons acted like a determined group and people came from beyond the surrounding areas (the farthest known were from Westchester, N.Y., although there was by no means an official poll conducted). Maybe they would get a picture of her to show off to their friends or perhaps they just wanted a public figure’s signature. But a significant portion wore “I’m With Her” shirts, or bore various Democratic pins, or, in one case, proudly walked around with a Wellesley flag tied around their neck like a patriotic cape. Teran agreed that there was a sense of loyalty and duty among those waiting in line. Many had driven an hour to attend, and even those who lived right nearby were more than willing to wait. To this writer, the event read as a bittersweet sendoff to the first female presidential nominee of a major U.S. political party.

Not everyone seemed happy that the controversial candidate had come to Middletown. Pro-Trump protesters featured signs with slogans such as “I’m With Him” alongside an abstract drawing of Pepe the frog and “You’re Not My Role Model” with a sad emoji. Another man walked up the line yelling, “Trump’s a worm, Trump’s a werewolf, Hillary’s a vampire,” apparently alluding to their ties to corporate donations. One person held a sign that read “You’re With Them,” with Clinton’s signature arrow pointing to phrases like “Big Pharma” and other corporate sponsors that supported Clinton during her presidential campaign.

The line moved slowly as each patron went through a metal detector and allowed Secret Service agents to search their belongings. Once inside, attendees snaked around the tables of books that R.J. Julia had out. Each attendee shook Clinton’s hand and had the opportunity to speak with her for a moment.

The strange effect of this layout was the ability to watch every person walk away from Clinton. They had a wide range of expressions on their faces. Some appeared simply giddy, some almost wistful, nostalgic, and others still wearing a wry smile. Two young women cried and hugged, apparently overcome with joy and clutching their new books. An outsider with no awareness of who Clinton is would have simply seen a 70-year-old woman sitting at a table as hundreds of people blustered their way through an attempt to briefly communicate something—anything—of significance. But, to this author, it seemed that most took this as an opportunity to say thank you.

As the initial supply of books began to run low, employees scrambled to restock the table. Clinton pitched in with helpful suggestions, improving the flow of the event with her trademark capacity for leadership and efficiency.

“It was so telling to me in that she had perfect control over this silly thing in that they weren’t really getting the books to her as quickly as they should,” Teran noted.

The woman waiting in front of Teran was running for office in Connecticut, a fact that she brought up to Clinton.

“It’s a Republican stronghold apparently,” Teran said. “And it was so impressive because Hillary wasn’t prepared to talk about this…. And Hillary launched right into exactly what this young woman needed to do to strike at the vulnerable point of her opponent’s position. Hillary just zeroed right in on it in two seconds.”

“Seeing Hillary Clinton was surreal,” Aberle said. “From far away, I thought I was looking at a picture because Clinton looks in real life exactly like she does on TV. Regardless of what her legacy will be, it was incredible to shake the hand of someone with enormous historical significance.”

This writer realized while waiting and walking through the line that there was nothing quite worthwhile to say to someone of such significance. After stammering out a few words of gratitude for her public service, Clinton replied, “Thank you, that means a lot.”

And then it was over. The signing felt like part of Clinton’s last goodbye to the American people. Everyone walked away with the souvenir of “What Happened,” a memoir that would perhaps give them a little more insight into the woman that they had just met.