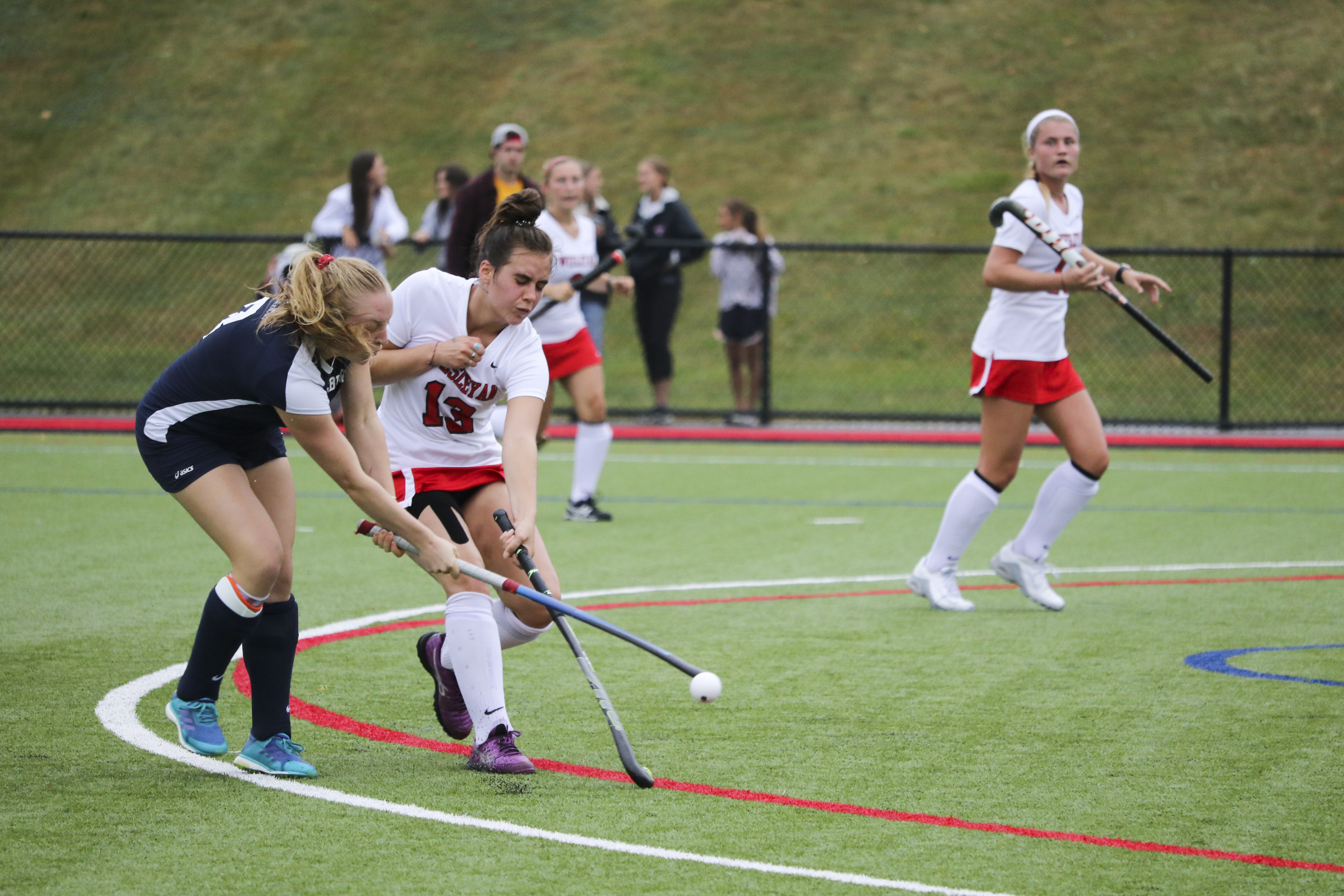 After a tough few months, field hockey finished the season strong with a win against ’CAC competitor Conn College. With an overall 4-11 record and 1-9 in conference, the team took the penultimate place in the NESCAC and some individual titles as well: goalie Delaney Wood ’20 dominated for most saves, with a total of 139, and senior standout Cici Frattasio ended her final season with nine goals, 10th in the league for most scores.

The game began with a strong offensive push from Frattasio as she nearly sunk a shot just two minutes in but was stopped by the formidable Ephs’ defense. After a Williams goal halfway through the first half, sophomore Abby Manning attempted to tie up the game but was stonewalled by a well-fortified Ephs’ defense just as Frattasio had been.

Even after some nice passing of the ball between first-year Nikki Gerjarusak, Maddie Shea ’20, and seniors Tierney and Frattasio, the Cards were still unable to get on the board. The Ephs fought back near the end of the second half with two goals, one in 59th minute and another in the 62nd. Yet just three minutes later, Shea fed the ball to Frattasio once more, who successfully scored to put the team on the scoreboard.

Yet the team’s 3-1 loss led to a personal victory: Wood, the Cards goalie, ended the game with a career-high of 17 saves, even as Williams held a 33-9 advantage in shots.

Despite Trinity’s fifth-place ranking in the NESCAC, two below third-ranked Williams, Wesleyan’s fall to the Bantams on Wednesday, Oct. 18 was by a much larger margin. In the first half, Trinity made sophisticated maneuvers up the field to score three goals in just under 30 minutes. The first came 10 minutes in as Trinity’s Kelcie Tam scored her 13th goal of the season. Tam’s scoring power is undeniable: she finished the season as the NESCAC’s top scorer with 23 goals.

Not even thirty seconds later, Tam assisted Trinity’s second goal of the game. The Cards fought back with strong offensive attacks from Frattasio and Manning, but the ball made it back over to the other half of the field for a third goal from the Bantams, also netted by Tam.

The second half continued much like the first, as Trinity’s lead increased to 5-0 with two goals from Jordan Ragland. But Wesleyan was determined to fight a shutout. In the 56th minute, Shea lobbed a pass to Frattasio, who sunk the ball behind the Bantams’ goalie. This was Shea’s third assist of the season and Frattasio’s seventh goal.

With just over a minute left in the game, Trinity made their sixth and final goal of the game, demolishing the Cards by a final score of 6-1.

The Red and Black made a trek again to face off against a NESCAC rival, this time in Amherst to play some Little Three competition. On Saturday, Oct. 21, the Mammoths made their power clear early in the game with a goal in the first four minutes. Cards goalie Wood remained solid until the very end of the half when another Amherst shot slipped in just behind her.

Heading into the second half down 2-0, the Dirty Birds attempted to pick up speed but were denied and surrendered another goal in the 55th minute. After a close shot from Frattasio five minutes later, the game ended with a Wesleyan 3-0 loss. The Cards will have to wait another year to take on their Little Three rival again, and hopefully claim a win they’ve been anticipating for over a decade: the team hasn’t beaten Amherst since 2005.

Conference competition was nonstop as Wesleyan traveled to Conn College for their last hurrah of the season. The Camels quickly showed their initiative with a goal in the eighth minute, but Frattasio was determined to make her final game a memorable one. Just over two minutes later, she evened the score to 1-1 with an assist from Gerjarusak.

The pattern continued as Conn came back with a goal in the 19th minute, but Frattasio scored her second goal of the game to tie it at 2-2. Assisted by Iannarone, this was Frattasio’s second multi-goal game of the season. Just over a minute later, sophomore Erica Horowitz broke the back and forth to score Wesleyan’s third goal of the game as the first half came to an end.

As the last half of their season began, first-year Amy Schaap had her first assist of the season with a pass to Behles, who sunk the ball in with a quick and low shot. Now down 4-2, the Camels were able to squeeze in a final goal off a penalty stroke in the last five minutes. Yet their efforts to catch up to the Cards in the final seconds were fruitless, and Wes finished their last game with a long-awaited NESCAC victory.

Senior captain Iannarone was happy to be a part of a final triumph over the Camels.

“The highlight of the season was definitely the Conn game,” she said. “Everything we were working on throughout the season came together. It was great to see. Hopefully, this starts a trend for next year.”

As the field hockey team take some time off before gearing up for its next season, the Cards say goodbye to some of their star players and captains. Frattasio, who led the team offensively in shots and goals, will miss the group’s team spirit.

“I’ll miss the fact that my team, for about two hours every day, always managed to help me forget about a bad day just by playing the sport together,” she said. “There is no better feeling than going on the turf with your team after a tough day of work and letting go of all the stress for a bit.”