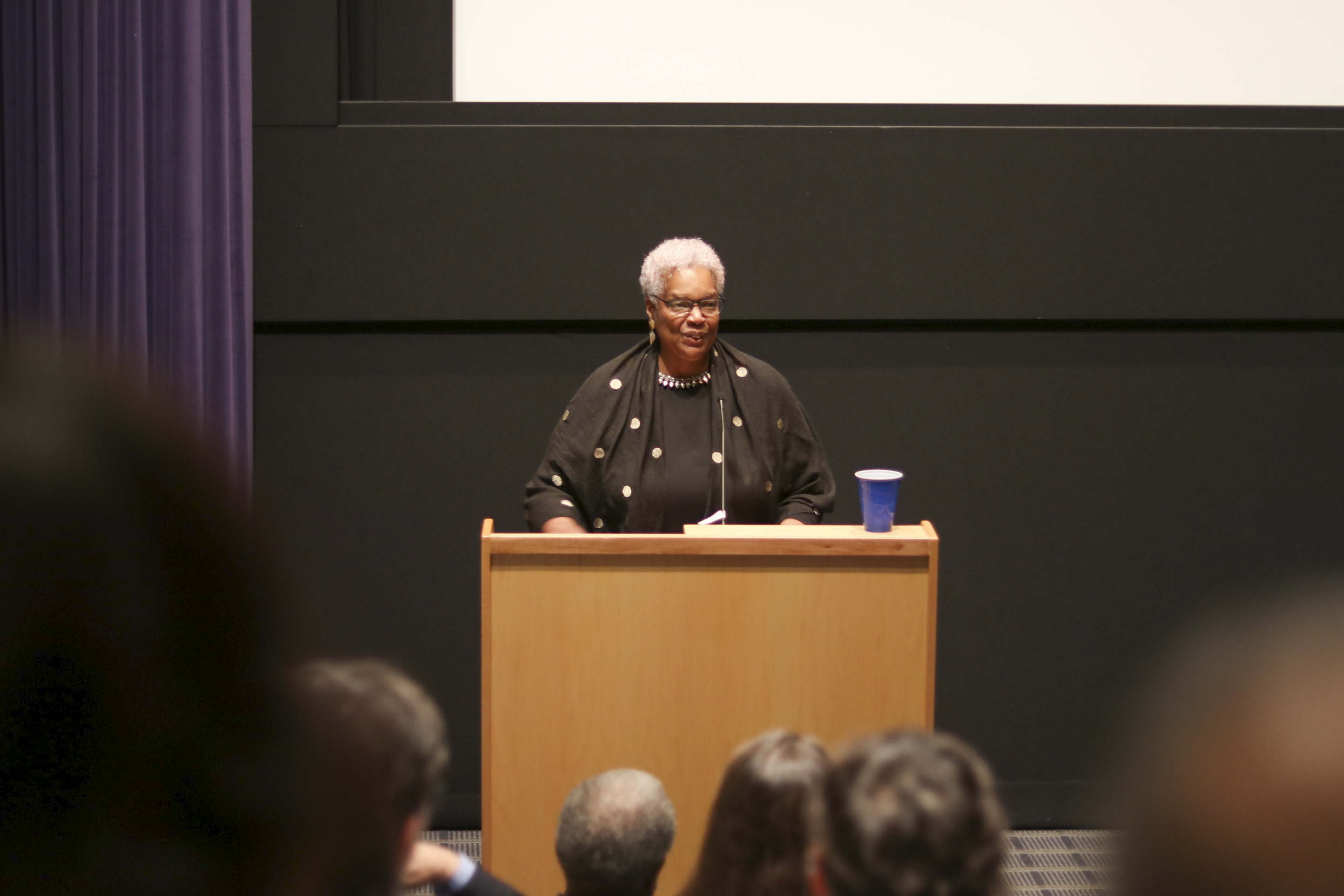 DuCille was the William R. Kenan, Jr. Professor of Humanities at Wesleyan from 1999 to 2005. She chaired the African American Studies Department during its infancy. She also chaired the English Department and directed the Center for African American Studies. Now in semi-retirement, duCille teaches part-time at Brown University. Her new book, “Technicolored: Reflections on Race in the Time of TV,” is due for a 2018 release. A chapter from it formed the basis of her lecture.

The talk opened with a scene from the 1990 film “Bonfire of the Vanities.” In the clip, Tom Hanks’ character is attempting to clear a path for his vehicle. He is soon confronted by two Black thugs who feign offering help. There are ominous music cues, and one of the men reaches into his pocket, presumably to draw a gun.

A component of duCille’s lecture—that Black Americans have been negatively depicted for the majority of television’s existence—should not come as news to the students, alumni, professors, and administrators who attended the event. The talk pushed the idea further, however, by insisting on the prescriptivist burden such depictions impose on the daily lives—and sometimes deaths—of Black Americans.

“In the 21st-century American imagination, the default Black identity as played out in both popular and political culture is not only a violent, gun-toting street thug,” she began. “But also a feisty female who doesn’t know her place, like Sandra Bland, or a Black kid in a hoodie like Trayvon Martin, who can only be a ‘hood’ or a ‘thug’—‘up to no good,’ as George Zimmerman told the police dispatcher before the altercation that ended Trayvon’s life.”

In 2012, police officer Zimmerman fatally shot Martin, a 17-year-old African American who was unarmed. The shooting and Zimmerman’s subsequent acquittal spurred nation-wide protests and laid the foundation for the Black Lives Matter movement.

Similar high-profile shootings, many of which duCille noted, have followed Martin’s death. Among them was that of Bland, who was arrested on a routine traffic stop and found hanged in a jail cell three days later. Public outcry followed, as well as skepticism that Bland died by suicide as opposed to murder by police.

“This talk, and the book chapter from which it’s drawn traces the meaning, use, and Blackening of the term ‘thug,’” duCille continued. “[I argue] that the ‘Law and Order’ Black thug narratives we so often see on the TV screen color how we see Black people on the street…. Far from uplifting the race by portraying African Americans at their best and brightest…TV today often functions as a form of racial profiling.”

DuCille explained that since it premiered in 1990, “Law & Order” and other police procedures have featured almost no sympathetic Black police officers or other protagonists. And where Black protagonists do exist in the genre, she said, they are often expendable, stereotypical, or at best two-dimensional.

DuCille highlighted the two Black “CSI” characters Warrick Brown and Dr. Raymond Langston to illustrate this point. Brown’s father abandoned him at birth, whereas Dr. Langston’s father is an abusive alcoholic. Dr. Langston at one point kills two suspects and requires his colleagues to cover up for him.

An important qualifier, and one which duCille alluded to, is that although negative depictions of Blackness on television have become near-ubiquitous since the late 1980s, such portrayals are anything but a historical anomaly.

DuCille soon explored the etymology of the word “thug.”

“Derived from Sanskrit, a Thuggee or thug was originally a member of a secret society of marauding thieves of insurrectionists,” she explained. “[Thugs] roamed throughout India for hundreds of years, allegedly committing all manner of murder and misdeeds until they were suppressed by the British in the early 1800s. The term ‘thug’ morphed into the English language with the more general meaning of robber, rogue, or ruffian.”

DuCille also focused on the association of thuggery with rap music, which she says has permanently instilled an aura of lawlessness on the term.

“The terminology was of, by, and for the street ethic and survival schemes of urban youth for whom rap music was a form of self-expression and social commentary, a way of telling the hard-luck stories of ghetto existence,” she explained. “[Rap music] emphasized being trapped by gang life and addressed how it was that street crime became a line of work in the context of chronic Black joblessness.”

DuCille, citing cultural theorist Tricia Rose, claimed that these initially complicated representations were eclipsed by a simplifying process of commercialization. The filtered images which survived in the public image, she claimed, produced a series of nefarious characters which only further reinforced any pre-existing negative attitudes white Americans held toward their Black counterparts.

Throughout the lecture, duCille referenced President Donald Trump’s involvement in this development. She argued that Trump has contributed to the popular notion of Black thuggery, which by the 1990s had become codified in the public’s imagination and in media depictions. A major contribution of his, DuCille explained, was his public demonization of the Central Park Five.

In 1989, a white woman was sexually assaulted during a routine evening jog in Central Park. Four Black boys and one Latino boy were relentlessly demonized in the press for supposedly committing the crime. They did not, in fact, commit the crime.

President Trump became so infuriated with these innocent teenagers that he advocated for reinstating the death penalty. He went so far as to take out a full-page advertisement in the “New York Daily News” to advocate for their executions and a restoration of “law and order.”

To this day, Trump denies the Central Park Five’s innocence, despite the presence of definitive DNA testing, the criminal’s own confession, and the fact that the 15- and 16-year-old boys were coerced into falsely confessing.

As of late, Trump has morally equated armed white supremacists who gathered in Charlottesville with their counter-protestors. This summer, as duCille recounted, he gleefully encouraged police officers to “rough up” detained “thugs.” “They’re animals,” he also said of detained “thugs.”

In 2015, Gray was arrested for possession of a switchblade and then allegedly given a “rough ride” by Baltimore police on his way to the trauma center. A “rough ride” is a form of police brutality in which an unfastened prisoner is violently thrown around the back of a police van due to purposefully erratic driving. Gray died from severe spinal injuries which he had not suffered from before police transported him.

DuCille also delved into the policy implications of the “thug default.”

“The image of predatory Black thugs wilding through the streets would influence public policy and anti-crime legislation at the city, state, and federal levels,” she said. “‘Three strikes’ regulations and mandatory life without parole became the law of the land.”

In 1970, former President Nixon called for “law and order” and a crackdown on drug abuse. By 1990, the country had declared a War on Drugs and implemented mandatory minimum sentences. These policies disproportionately targeted and incarcerated minority Americans. In 1970, the U.S. state and federal prison population was just below 200,000. By 2000, the number had risen to more than 1.5 million. One in every 106 adult white males is incarcerated, compared to every 1 in every 15 adult Black males.

DuCille did not shy away from laying blame for these policy disparities on other prominent figures, like 2016 Democratic presidential candidate Hillary Clinton.

Clinton, duCille explained, infamously invoked the theory of the “superpredator” in a 1996 speech she gave in support of President Bill Clinton’s “tough on crime” agenda. Princeton Professor John D. Dilulio, Jr.’s infamous—and now debunked—theory posited that a new generation of criminals had led to the nation’s steady uptick in crime, which had peaked in the early ’90s. These “superpredators” were understood to be Black youth raised in impoverished ghettos.

Hillary Clinton has since apologized for her use of the racially-coded term.

DuCille anticipated obvious pushback to her thesis, like her notion that the word “thug” only applies to people of color. White people, the argument goes, have also been called thugs.

“‘Thug’ doesn’t apply in the same way to white men,” she insisted. “It’s not powered by the same Pavlovian response to skin color that has been a death sentence for hordes of Black women, men, and children.”

DuCille then recalled other high-profile killings of unarmed Black citizens, like the deaths of Eric Garner, Walter Scott, and Tamir Rice.

She cautioned, however, that the “thug default” produces a range of profiling, some of which do not necessarily end in fatal shootings.

“The ‘thug default’ means that every Black body is suspect: subject to search, seizure, service refusal, [and other] daily assaults in which dignity is damaged, rather than life taken,” she said.

Black representation matters, she maintained, because it may save lives.

“The critical point, most emphatically, is not about uplifting the race to show white people how civilized Black people are, or how well-behaved,” she qualified.

“NHI: No humans involved,” she continued, recalling the phrase which LAPD officers have used to discuss dispatches involving only Black people. “Cops and other negro foes continue to get away with killing Black people because they claim they fear for their lives. At a time when we are more readily taken for thugs, thieves, and threats to life, representation is about saving our own lives, about making black lives matter.”