Humor That Bites and Voices That Soar in “Bat Boy: The Musical” 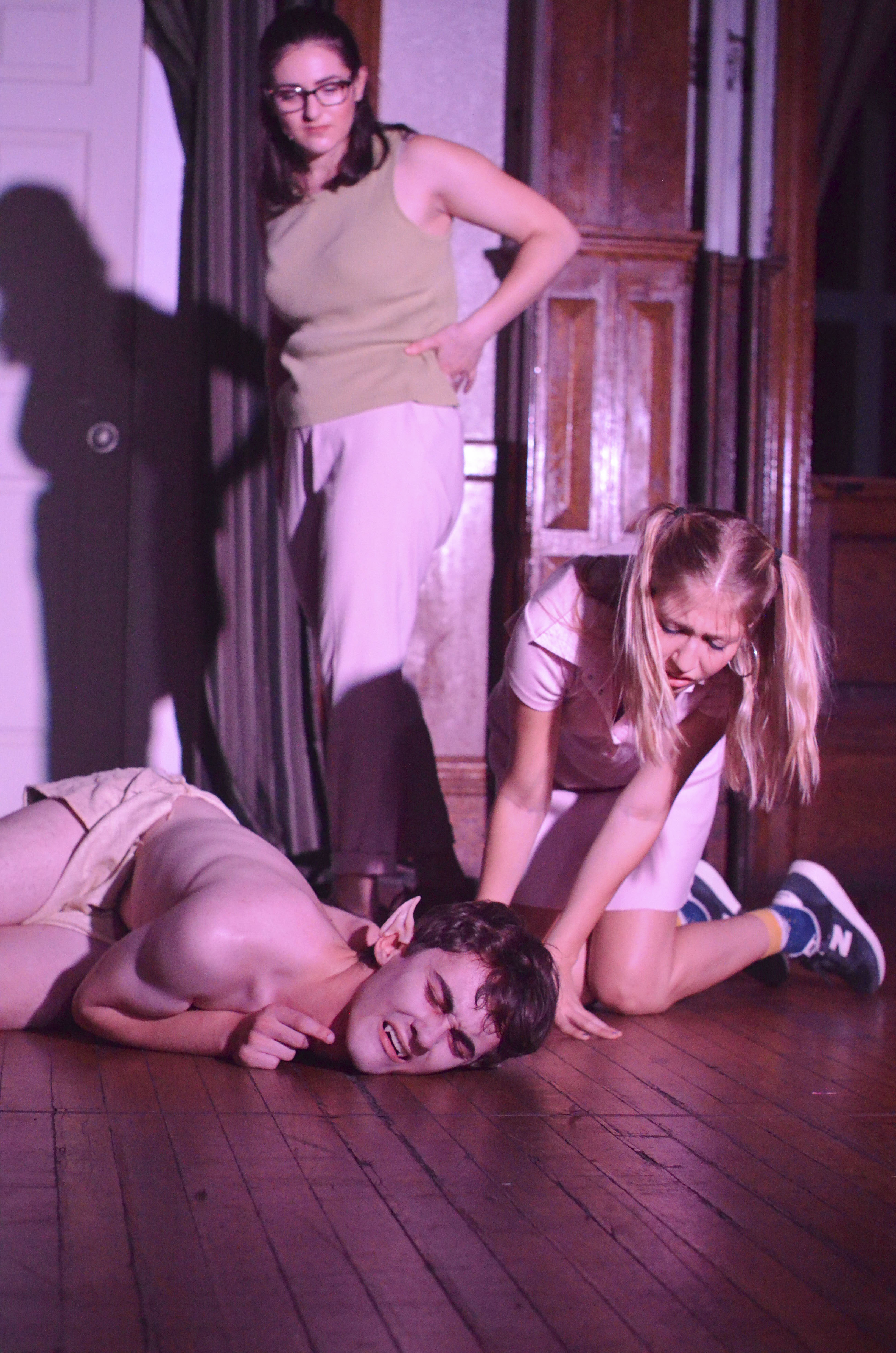 Psi U has been transformed into a cave. Eerie lighting floods the room, while the dripping of water and the faint screeches of distant bats fill the ears of audience members. Suddenly, sharp beams of headlamps illuminate the scene and we are met with three child spelunkers. But there is a figure playing with the children that is neither human nor beast: the bat boy.

Theatrical powerhouse Tekla Monson ’18 is mounting a production of “Bat Boy: The Musical,” which is running at Psi U this Friday and Saturday, Oct. 27 and 28. The show tells the story of a bat-human hybrid named Edgar who is introduced to society by the Parker family. It takes us through the complex and fraught relationship between the Parker parents, the townspeople’s reactions to the child’s presence, and Edgar’s own internal struggles to figure out who and what he is. The show manages to grapple with issues of abuse and humanity while also being wildly funny and silly. It is, like the bat boy himself, a complex beast that defies definition, but is wonderful all the same.

The music of “Bat Boy” has something for everyone. It features classic Broadway showtunes, lilting melodies that sound like lullabies, and belted ballads that bring the rock energy of shows like “Rent” or “Jesus Christ Superstar.” Johnny Hayes ’20, who plays Rick Taylor and Lorraine, delivers a high-energy spectacle with the rest of the ensemble in the show’s opening number, which is sure to have you dancing in your seat.

“The best part of this show is the cast,” said Hayes.

It’s true. Each and every member of the cast contributes to the show, their vocal chops and high-energy acting shining through each scene. The voices of Molly Bogin ’18 and Nick Ticali ’20 as the Parker parents certainly make them a musical power couple. Bogin’s silver-toned voice masters the bridge between belting and soprano, rivaled only by Ticali’s incredible range. Playing their daughter Shelley, Caroline Adams ’19 seems to have inherited her stage parents’ skills, her beautiful voice ringing out through the audience with restrained power. And the nuanced acting and strong voice of Miguel Pérez-Glassner ’21 as the bat boy himself are sure to enthrall you. The ensemble members add a hilarious mix of Oz-like surrealism and American country life, forming an entertaining and integral part of the show and its staging.

The cast’s stunning performance doesn’t stop at the music, though. Electric choreography by Tyler M. Clarke ’18 runs throughout the show. The variety of dance, which combines ballet, hip-hop, jazz, tap, and modern, mirrors that of the music. These dances, as well as the rest of the staging, are organized in an immersive and engaging way by Monson, the show’s powerhouse director, and her associate director Ryan Dobrin ’18.

“[The Psi U house] is this fun combination of very stately and regal while also being a little decrepit,” Dobrin said. “Which exactly fits into this sort of play.” 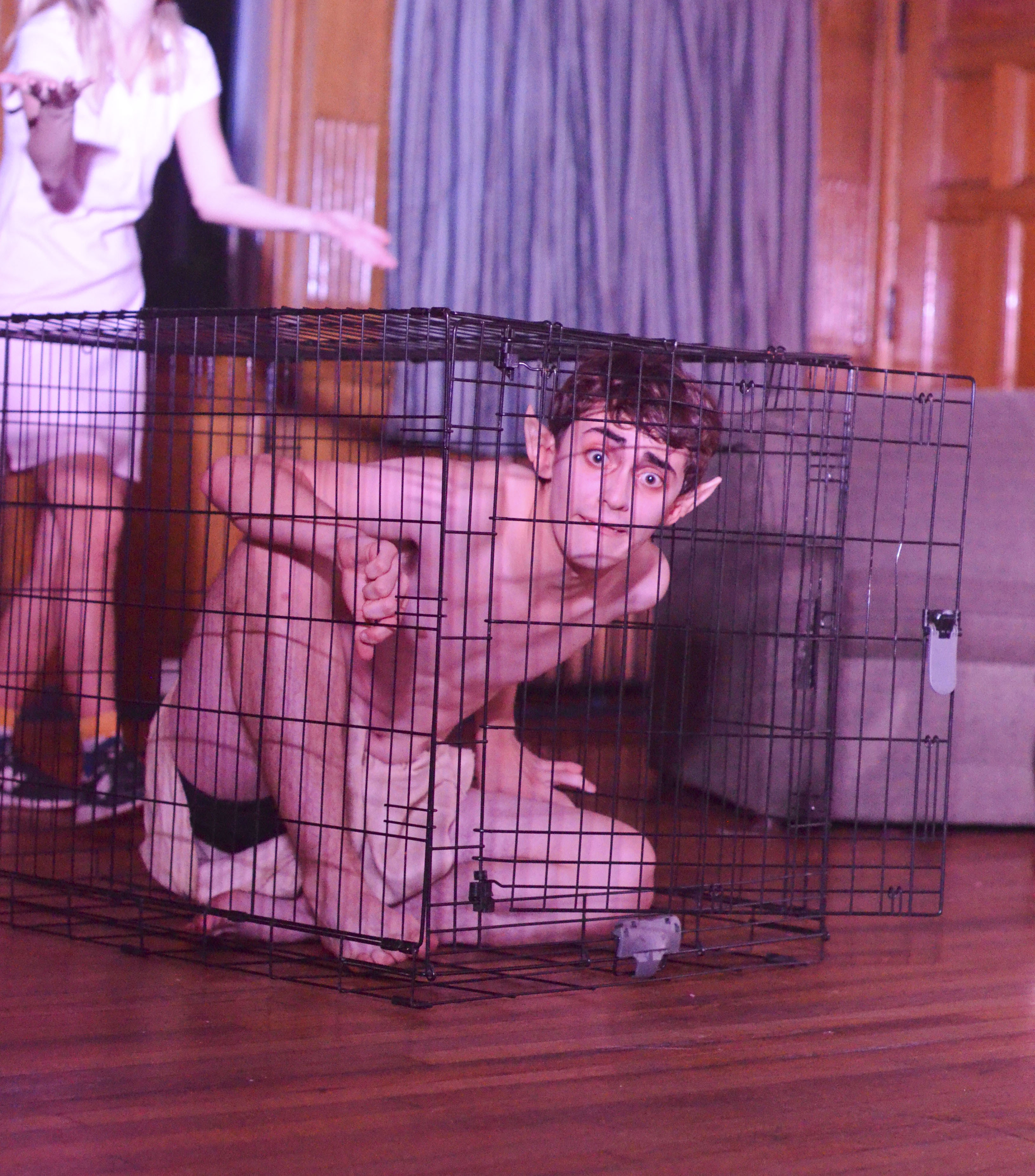 “Bat Boy” also meditates on a number of sociological themes in ways that meld humor with sharp scrutiny. It offers a pointedly funny critique on the idea of “Christian charity” by painting a picture of townsfolk who consider themselves holy, yet judge and kill others. It points to the way its characters use religion to create a false sense of superiority: At one point in the show, they express their excitement for a traveling preacher who is going to bring a cross that is “like stained glass…but vinyl.”

“It sort of is a commentary on Christianity and what it’s like to be ostracized by a group of very religious people,” Hayes observed.

The show also grapples on a deeper level with questions of about what makes us human. Due to his pointed ears and fangs, Edgar is judged as a beast. However, his discovery of his navel demonstrates that he is someone’s child, deserving of love and care. As audience members, we’re forced to question who is more human: the boy with fangs who carries kindness and love in his heart, or the seemingly normal townspeople who seek scapegoats and wish to simply kill off their problems. The definitions of animal, beast, monster, and man are blurred throughout the piece, causing us to think deeply between our moments of raucous laughter.

“I love it because it’s silly,” Monson said, “but it still has such genuine, raw emotions.”

Dobrin expressed a similar sentiment, adding, “It’s a really fun time, but also it really tackles the question of: How do you treat someone who you don’t understand and who’s different from you?”

If you want to be simultaneously entertained and provoked, to dance while thinking, and to laugh while screaming, come see “Bat Boy: The Musical” this weekend.