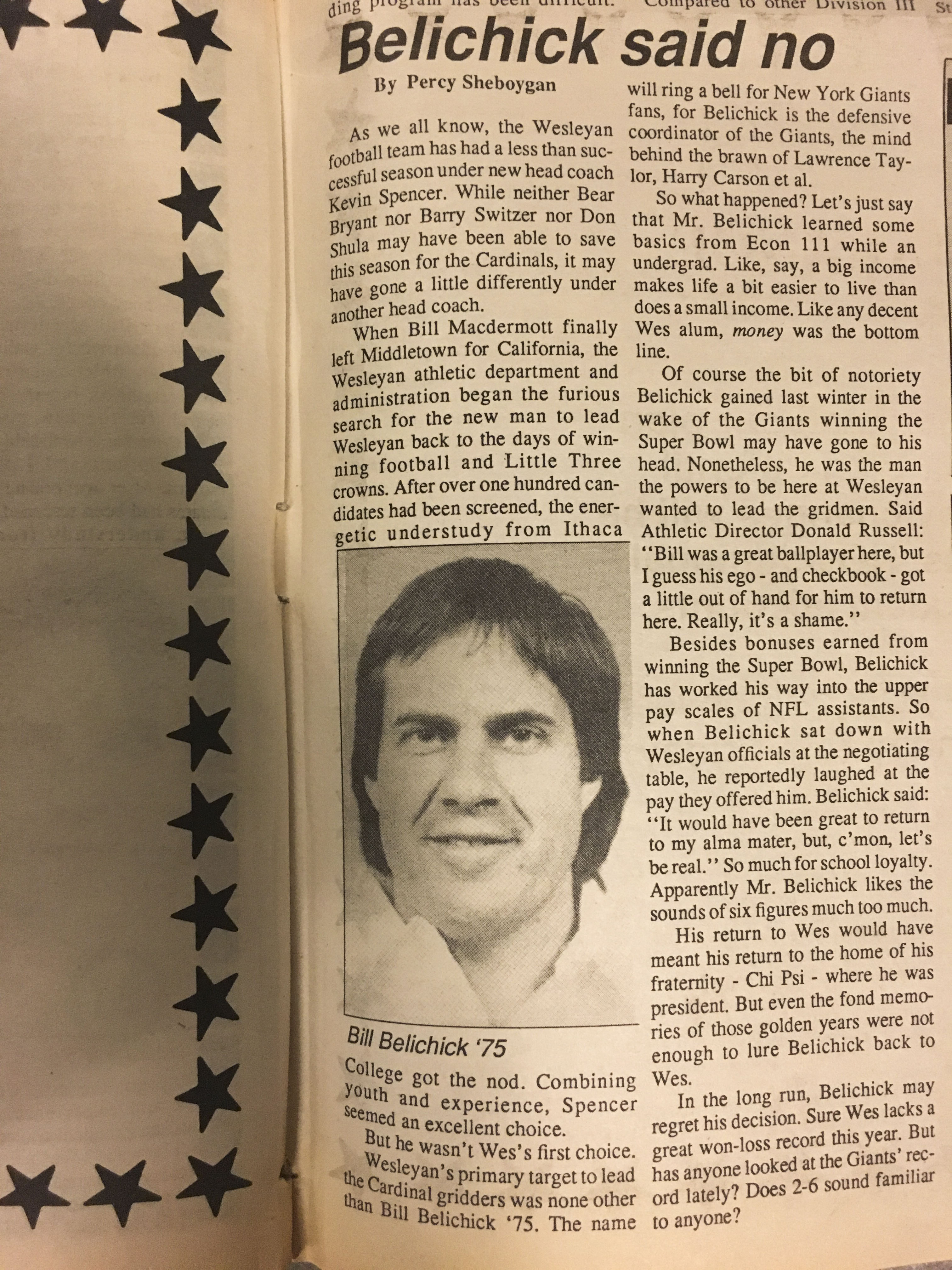 In 1987, the Wesleyan Cardinal’s football team was spurned by one of their own. After a series of mediocre finishes in 1985 (4-4) and 1986 (3-5), long-time head coach Bill Macdermott, who had led the Cardinals since 1971, left the program to retire to California. A “furious search” ensued for a new head coach, and, after screening over one hundred candidates, the Cardinals finally found their guy. Or, so they thought.

The University’s first choice for the position was a prodigious alumnus who was just beginning to have some major success at the professional level: Bill Belichick ’75.

Yes, that Bill Belichick. You may know him as the head coach of the New England Patriots, and a five-time Super Bowl champion and three-time AP NFL Coach of the Year. However, in 1987, Belichick was the Defensive Coordinator for the New York Giants and was just beginning to gain some notoriety as a visionary defensive schemer. According to an Argus article from November 13, 1987, titled “Belichick said no,” Wesleyan Athletic Director Donald Russell believed that offering Belichick the Cardinal’s head coaching gig might be enticing enough to lure him away from the siren calls of the NFL.

“Bill was a great ballplayer here, but I guess his ego—and his checkbook—got a little out of hand for him to return here,” Russell told the Argus, as quoted in the article. “Really, it’s a shame.”

At Wesleyan, Belichick majored in Economics, was a member of the Chi Psi fraternity, and was team captain of the lacrosse team. He also played squash and football, lining up at tight end and center. The Cardinals never produced a winning season while Belichick was on the football team. In 2008, he was an inducted into the inaugural class of the University’s Athletic Hall of Fame. His daughter, Amanda Belichick ’07, was the head coach of the girl’s lacrosse team in 2014 and 2015.

By 1987, Belichick had been a member of the New York Giants’ coaching staff for eight seasons. He began as a defensive assistant and special teams coach for the New York Giants in 1979, and was named defensive coordinate under Head Coach Bill Parcells in 1985. In 1986, he led linebacker Lawrence Taylor and the Giant’s vaunted “Big Blue Wrecking Crew” defense in a Super Bowl victory over John Elway’s Denver Broncos.

Why didn’t Belichick take the job? While The Argus speculated that the bit of notoriety Belichick had garnered “may have gone to his head,” it ultimately concluded that he declined the job for one simple reason: money.

“So what happened?” the article reads. “Let’s just say that Mr. Belichick learned some basics from Econ 111 while an undergrad. Like, say, a big income makes life a bit easier to live than does a small income.”

Belichick seemed to agree. When he began to negotiate a salary with Wesleyan administrators, he was reportedly amused by the pay he was offered. The Super Bowl bonus Belichick had recently received may have put things in perspective for the young coach.

“It would have been great to return to my alma mater, but, c’mon, let’s be real,” Belichick was quoted as saying at the time.

The Cardinals eventually hired Ithaca College coach Kevin Spencer, who sat at the helm of the Cardinal’s machine for five seasons. At the time, the Argus editorialized that Belichick might “regret his decision,” citing the Giant’s 2-6 record through the first half of the 1987 season. But fast forward nearly thirty years and five Super Bowls later, and it seems to have worked out for a man who is now recognized as one of the NFL’s master tacticians (or evil geniuses, depending on who you ask).

Oh, and how did the Cardinals fare in 1987 without Belichick at the helm? They went 1-7.