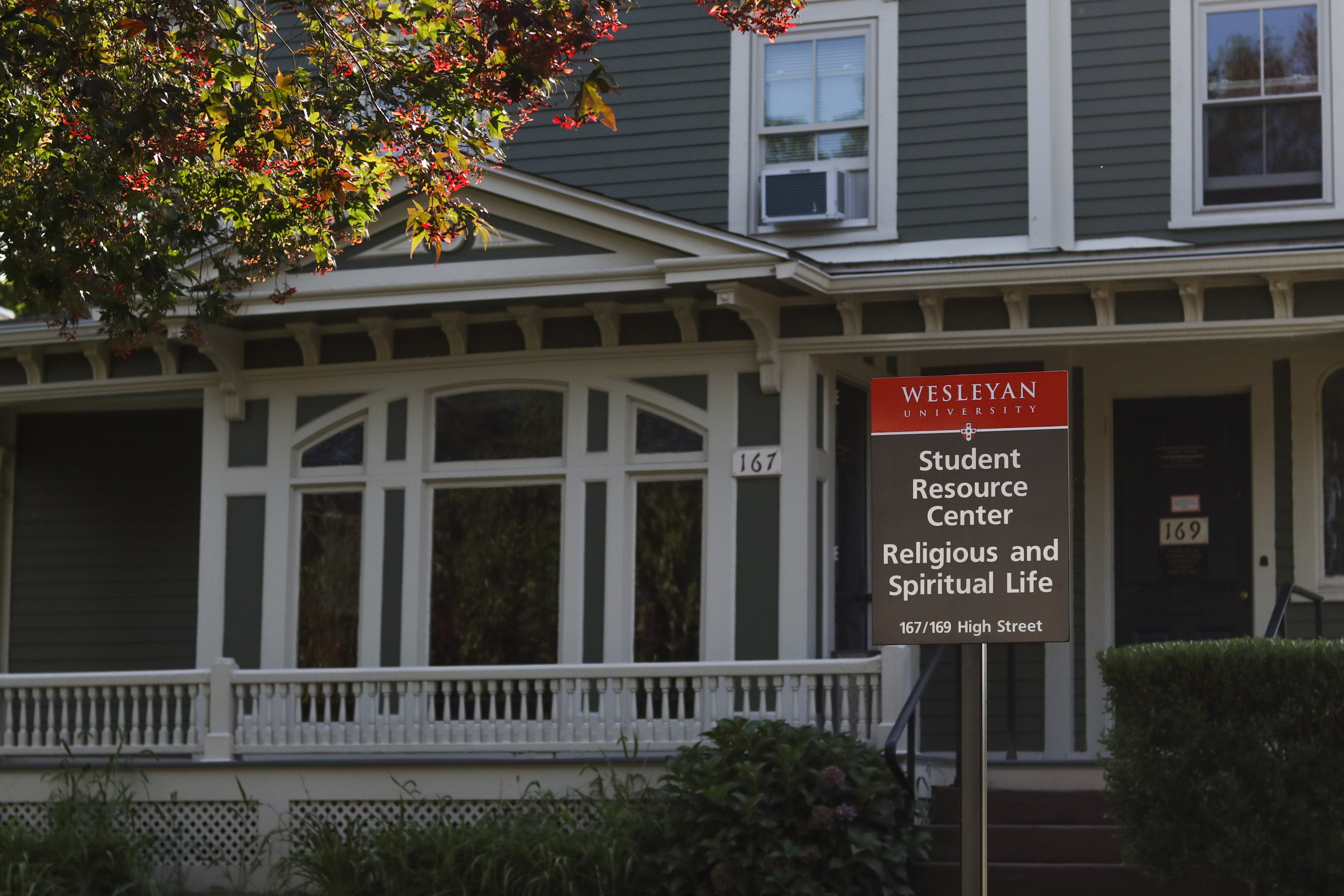 This Monday marked the opening of the University’s new Student Resource Center. Located at 167 High St.–formerly the home of the Shapiro Creative Writing Center–the center is part of the University’s Office of Student Affairs, though it will likely be collaborating with the Office of Equity and Inclusion.

In a campus-wide email, University President Michael Roth ’78 announced that Demetrius J. Colvin would be the new director of the SRC, and gave credit to student, faculty, and staff for providing their input throughout the Center’s conception.

The new resource center’s goals were initially guided by a proposal developed last year by the Equity and Inclusion Steering Committee. The 26-page document provides an in-depth summary of the plans for the future of the center.

“In the Center’s first year, we propose hiring a Director to oversee daily operations, an Associate Director to work with and support students, and a Faculty Fellow to assist with programming,” the proposal reads. “In the second year, we propose adding a Professor of the Practice with co-curricular responsibilities.”

The proposal continues by discussing plans to create an advisory board for the center, to be composed of two tenured faculty members, two alumnae representatives, two staff members (one from the Office of Student Affairs and one from the Office for Equity and Inclusion), and five students (ideally one to represent each of the four identity group sub-centers and one WSA representative).

“The Advisory Board will work together to guide the Center’s growth and preserve institutional memory,” the proposal reads. “The four sub-centers will serve students of color, first-generation and low-income students, queer and trans* students, and female-identifying students. The Center will work closely with individuals, groups, and student-staff, who cultivate intersectional work and spaces on campus, providing avenues for the engagement of others who have an interest in social justice.”

WSA Vice-President Sanam Godbole ’19 will also be sitting on the Equity and Inclusion Steering Committee (EISC). She will help identify active and systemic inequities on campus and attempting to eliminate the roots of these issues.

“The mission of the Center is to celebrate underrepresented or misrepresented identities, which [students of color] fall under,” Godbole wrote in an email to The Argus. “The Center can be a platform that allows privileged and non-privileged students to learn about privilege and intersectionality, which would bolster equity on campus. I believe [students of color] and student groups will have an avenue to communicate with other members on campus, which will begin to bridge the gap between identities on campus.”

“Last year, for instance, we spoke to survivors in STEM fields, who were processing the news about Scott Backer’s arrest and were upset that professors were not making space in the classroom to acknowledge the trauma they were processing,” she wrote. “At the same time, we heard from Professors who wanted to better support students in this way but felt like they didn’t know how or didn’t have the tools to do so. The Resource Center creates a formalized space where members of the community can not only seek help and advocate for new resources but can also learn from each other how to create a more compassionate community that prioritizes Equity and Inclusion beyond the Center’s walls.”

Currently, the Center is designated to serve as a resource for all student needs. That being said, Vice President for Student Affairs Michael Whaley expects that there will be cross pollination between the center and the Equity and Inclusion team.

The Conception of the Resource Center

Although the Resource Center has just become a reality, Whaley said the idea for it originated during the fall semester of 2015.

“The Resource Center was an outgrowth of a long history of student protest and activism on Wesleyan’s campus–most recently the #IsThisWhy protests in the Fall of 2015 and a group of students who created a proposal for a Gender Resource Center,” Hutman wrote.

The #IsThisWhy protests eventually led to the creation of an Equity Task Force during the spring semester of 2016. The task force’s aim was to explore sources of inequity on campus.

“The Task Force recommended, among other things, that a resource center be built to serve students of color, first-gen and low-income students, female-identifying students, and LGBTQ+ students,” Hutman wrote. “After reading the report, President Roth promised to support the recommendations of the report; the Office of Equity and Inclusion then created a committee to figure out how these recommendations would actually be realized.”

Already involved with the WSA, Hutman also entered the fold in the fall semester of 2016 as a member of the Equity and Inclusion Steering Committee.

“We spent the year trying to listen to many of the voices who had pushed for the Center, understand the many visions people had for the Center, and draw up a proposal for a Center that could a) best recognize the needs and desires of those who had called for it and b) be a sustainable structure going forward,” she wrote.

Hutman worked on the steering committee alongside Evelysse Vargas ’17, Ainsley Eakins ’18, and others. Vargas told The Argus that a majority of the work completed by the Task Force was commissioned during the 2015-2016 school year.

“We as the steering committee really used the Task Force’s findings to guide our discussions about what the center might look like and what was important when considering the center,” Vargas wrote. “We were talking about location with respect to the rest of campus, what kind of faculty involvement would exist, and what kind of staff involvement there would be.”

The Steering Committee’s main job was to create a space flexible enough to support marginalized communities despite the possibility of evolving threats to these communities.

The Current Political Climate and the Center’s Work on DACA

According to Dean Whaley, the center will have to spring directly into action given the recent news concerning President Obama’s immigration policy, DACA.

“We have begun talking about this issue with the announcement from the Trump administration last week,” he wrote. “As we did last academic year, we expect to provide some information sessions as well as access to immigration lawyers for students with DACA or who may be undocumented (and/or have family and friends who are).”

Hutman also shared her vision for the Center’s response to the DACA repeal and how she hopes this will inform social justice efforts moving forward.

“The Center didn’t specifically anticipate the Muslim Ban or a DACA repeal, but I’d hope that going forward, the Center is able to be a source of support and solace in moments of crisis,” she wrote. “Right now, the Center has a Director and a small building; soon we hope to have a faculty fellow and an Associate Director. But if the Center looks exactly the same in 5 years as it does now, then it’s probably not working. I hope that students on campus continue to point out what the Center is getting right, where it’s falling short, and suggest how it should grow to meet evolving needs.”

She also shared her hopes that the Center would continue to engage with advice from students on how it can grow in the future.

“I hope that the Center will make clear what resources exist, allow students to recognize what additional support (legal and financial) could be useful, and serve as a platform to realize, organize, and deliver those services,” she wrote.

Godbole shared Hutman’s sentiment on the Center’s role at the University in the context of both national politics and campus activism.

“It has become increasingly evident that our campus is in need of a space that makes more students feel included and supported,” Godbole wrote. “We hope that the Resource Center will be a physical space for students to convene and provide comfort for one another. Furthermore, we hope that the Center can develop discourse on transphobia, macroaggressions, racialized police brutality etc. that have manifested on campus. I believe the new Resource Center will establish ties between diverse groups on campus and bolster intersectionality across campus.”

The new Resource Center is currently open, and will be hosting an open house on Friday, Sept. 22 from 3 to 5 p.m.

Camille DeBeus can be reached at cdebeus@wesleyan.edu.