Inclusivity as Intention: The MASH from Past to Present 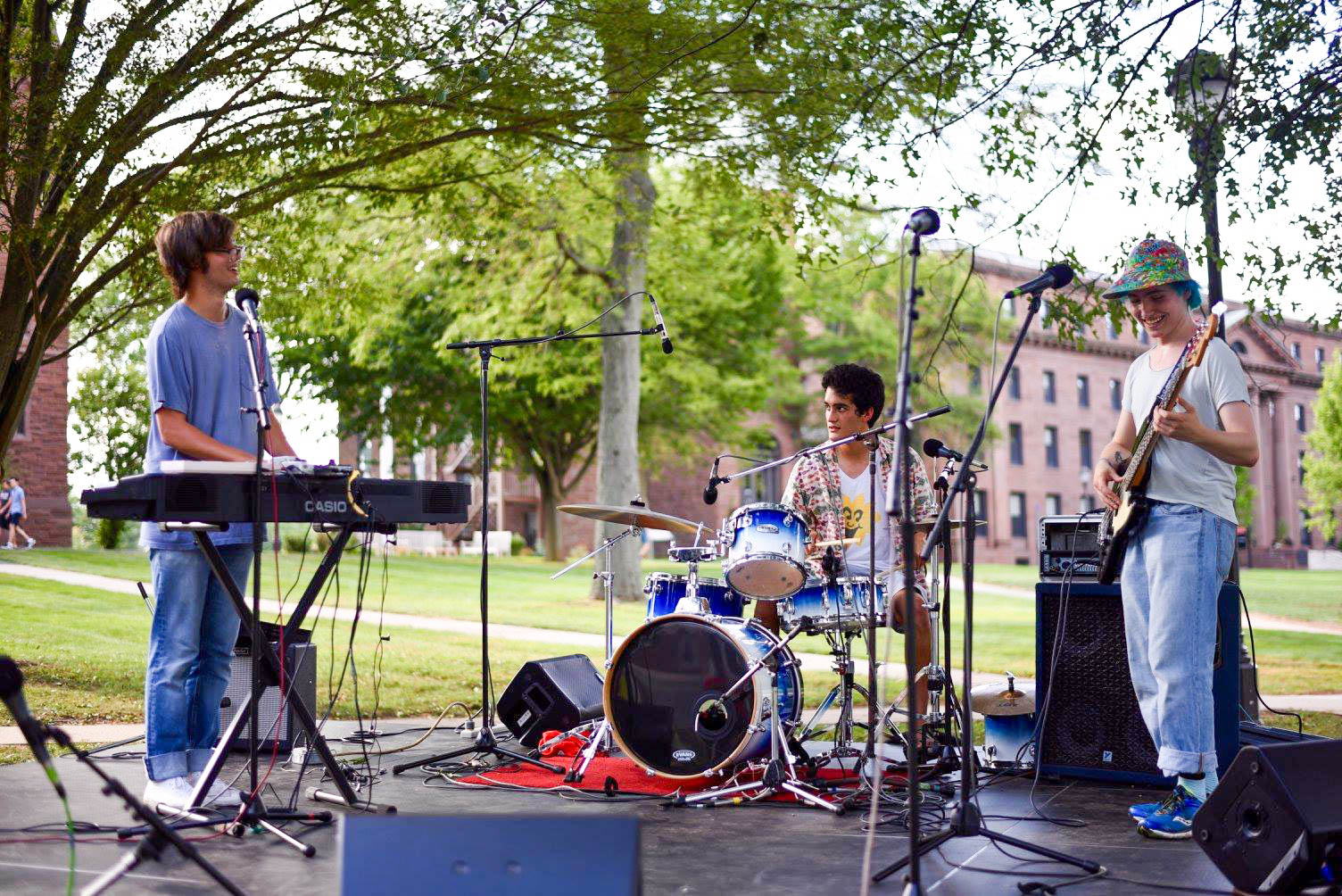 Be it rain, sleet, or shine from Church to Washington Street, campus will swell with the sounds of Wesleyan’s music scene this Saturday. Whether you’re a tenured professor basking in the glory of your Judd Hall corner office or a newcomer still figuring out which one of those buildings along Andrus is South College, the MASH strives to make accessible the diverse range of music University members have to offer.

While the origins of the MASH stem from Fête de la Musique (or Worldwide Music Day)—a music and art market that began on the streets of Paris in 1982—all-day festivities like the University’s iteration have now spread to 540 cities around the globe. Now entering its sixth year, the MASH festival has become a University staple, capping the first week of classes.

Assistant Director of Programs at the Center for the Arts (CFA) Hanna Oravec helped found the program with the hope of spreading music around campus.

“It started in 2012 as part of a larger initiative in which the CFA partnered with several other departments called Music in Public Life,” Oravec told The Argus while walking across the CFA Green. “They were a series of public events throughout the year that really focus on how music performed out here on stage can be integrated into daily life at Wes.”

Featured on that inaugural bill were undergraduate, professor, and alumni-led acts like Bear Hands and Mattabasset String Quartet, which were showcased on various stages near Olin, Foss Hill, and the CFA Green.

University President Michael Roth ’78 is the member of one such professor band, named The Smokin’ Lillies, which have played at the past four MASH shows.

“Music brings people together, and whether you are listening or playing, community is enhanced,” Roth said.

“It’s about everyone feeling part of a community, a shared bond through making music, the obliteration (for the moment) of classification as faculty or staff or student,” said John E. Andrus Professor of Sociology Rob Rosenthal, Roth’s bandmate.

Forced to hold the outdoor concert early (before the chilly fall weather begins), Oravec and her team of student helpers—Evan Okun ’13, Chelsea Greene ’13, and Kevin Brisco ’13—were worried about incorporating freshmen who hadn’t yet fully enmeshed themselves with the campus music scene. They accomplished this by adding open mics.

“Each of the stages had what we called anchor bands and open mic spots in between them,” Oravec explained. “People could interact and be a part of the MASH without having to be a part of a band or having to be on campus beforehand.”

As the Music in Public Life initiative came to a close, Oravec was surprised when she was encouraged to bring the festival back that following year. Over the next couple years, Oravec continued her attempt to introduce each respective year’s newcomers. One initiative that proved effective was installing upright pianos throughout campus.

“Special shout out to the girl rocking out on piano outside Usdan right now,” Wesleying tweeted during the 2013 show. “She’s kicking major musical ass.”

As 2014 rolled around, Oravec decided to take a step back and reflect on where the festival had come from and what direction students wanted to see it move toward.

“Three years is a long time especially in the life of a student body,” Oravec said. “This is the moment to go back and talk to the students and ask what they get out of it and how do we continue to meet that?”

After sitting down with a 10-student focus group, Oravec found some answers.

“The MASH had morphed in their minds to be about how we get the freshman more involved,” Oravec said. 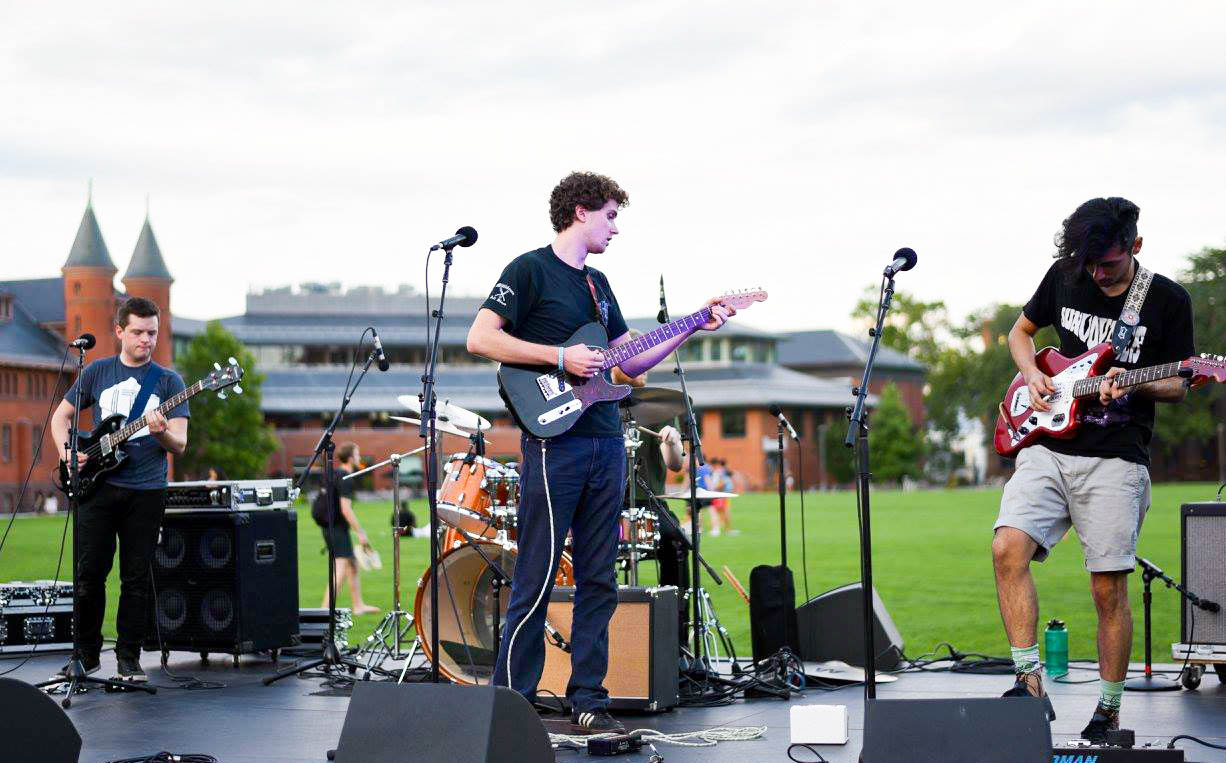 Another issue Oravec and her student organizers have needed to address is a lack of diversity on stage. Student Organizer Angus MacDonald ’16 from the 2015 festival offered his thoughts in a message to The Argus.

“I remember after the first round of putting together a… tentative lineup thinking that I would be embarrassed to be presenting so many white dudes on such a big program, especially one that’s about showcasing a bunch of different aspects of campus music,” wrote MacDonald, the musician-turned-student-organizer. “We did a few more rounds of having people sign up and took the opportunity to try and learn about what was going on on campus that we might not know about.”

“Last year [in 2016] I worked with Nyanen Deng [’17],” Oravec added. “She knew a very different music scene and was trying to bring that to the stage. This is something that we’re still working on with the MASH, to make it representative of the student body. That it’s really come one come all.”

This year’s Student Organizer Harrison Nir ’19 spoke with The Argus to discuss how he intends to shape the upcoming Sept. 9 performances. Nir has introduced art response as a means of making participation more accessible for those in the crowd with a variety of artistic inclinations.

“[Art response is] something I came into the job thinking about and pushing for,” Nir explained. “The idea was to get people responding to the MASH so that not only the people performing on stage had voices at the festival, but rather everyone had an opportunity to express themselves and come as an active community member. To have something to say if they did and have a way to express it aloud if they wanted.”

Nir and Oravec have worked extensively this year on art response themes throughout the day. Poets are set to perform in between the music on the Olin Stage, while the head editors of Reverberations will provide open journals as a space to create reaction pieces to the acts on stage.

2017’s festival also has its sights set on engaging more deeply with the Middletown community.

“Something that’s happened this year that’s creating a new scene for the MASH is the Middletown Stroll, which is a big open house on Main Street constructed by the Wesleyan CFA around R.J. Julia Booksellers opening up,” Nir said. “Local businesses will have discounts all up and down Main Street. Also live music [will be] happening at the Buttonwood Tree, and art on display at tons of galleries.”

On the future of the festival, Oravec sees this year as another moment to reflect on the celebration’s direction.

“We’re at that point where we’ve gone through another three years, how has the focus shifted again,” Oravec said. “To a certain extent, I can’t answer that question. It has to come from the students.”

“I really hope that the MASH and this new response culture can fire people up in terms of inspiring collaborative projects,” Nir said. “I hope people regard it as a moment of combustion, as a creative checkpoint for beginning the semester and the year.”

Emmet Teran can be reached at eteran@wesleyan.edu