Wesleyan Gets Mashed Up in Music and Sunshine 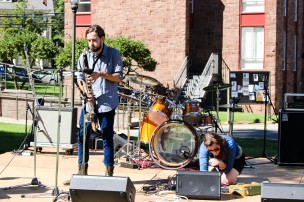 After successfully completing the first week of classes, students got one last taste of summer on Friday through the second annual campus-wide music festival, The Mash. Student performers overtook campus hot spots such as Olin Library, the Westco courtyard, and the Butthole to gather in the sunshine and share their sound creations.

“I love The Mash; I did it last year,” Faith Harding ’14  (also known as Novelty Daughter) said after her Westco stage performance. “It’s good to have it at the beginning of the year because we actually have time to spend all day listening to music instead of doing our work.”

Those who wanted nothing more than to sit after a stressful week of drop/add could be found lounging in the sun in front of one of the three stages. Some who wanted to get in on the performance fun headed over to one of the pianos set up by Pi Café and Usdan to jam in the sunshine.

Solomon Billinkoff ’14, who became a last-minute master of ceremonies on the Olin stage for the day, appreciated the good weather and the community vibe.

“My favorite part about today is the fact that the sunshine is shining on everybody’s beautiful faces, and everybody looks really good,” Billinkoff said. “This is when Wesleyan is at its best, when you can just chill out and be outside.” 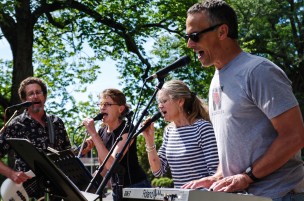 Both an upside and a frustration to the festival was all of the music happening at once. It was impossible to see all the performers of the day, but this made each individual’s festival experience unique.

I began my Mash experience in SciLi, begrudgingly trying to do some of my homework before all of the fun started. My concentration broke once I saw from the Fishbowl that President Michael Roth was rocking out with the Smokin’ Lillies in front of Olin. If the president is enjoying the sunshine, there is no better sign that you should abandon your reading to join the music.

I caught the tail-end of the Smokin’ Lillies. Robert Don ’15 hit the stage next.

“There was no way we could go wrong,” Don said about following the president’s act.

Don and his bassist-turned-drummer Matan Koplin-Green ’15 (switching instruments to make up for the absence of Dylan Awalt-Conley ’15 while he is abroad) rocked their set with a smooth indie-blues sound. The duo agreed that although the set was a little different from usual due to the trio’s missing member, both were extremely pleased with the performance.

“Overall, one of the best organized music festivals on campus, hands down,” Koplin-Green said.

Part of the reason for the top-notch organization can be credited to the fact that the administration sponsored The Mash. The Center for the Arts, the Office of Student Affairs, and the Green Street Arts Center all played a part in planning the event, and The Mash was advertised on the University’s website as a “legacy event of Music & Public Life.”

Programs were distributed throughout campus with a schedule for when and where each band would perform. Despite administrative help with organization and planning, the students playing and watching certainly remained the focal point.

Other performance highlights from my own personal music tour throughout the day were the experimental sounds of Sound It in the Butthole from Matt Chilton ’16 and Ben Zucker ’15 (who made an impressive dash from a Mixolydians performance at the Olin stage at the same time) and Alma’s Engine, featuring the acoustic stylings, powerful lyrics, and purposely breathy vocals of Alma Sanchez-Eppler ’14.

“I think this festival is a great thing for Wesleyan because it sort of adds a healthy heap of music to the campus sound world, which is pretty much always musical, but having actual music here gets us to think about the sounds around us musically a little bit more in every day life,” Chilton said.

The good vibes of the festival and the number of student performers definitely provided a strong start for a year of good music at Wesleyan. Check out The Mash’s website to see a full list of student performers, many of whom announced upcoming EPs or already released tracks on Bandcamp that are certainly worth giving a listen. Be sure to keep a look out for more concerts from these performers throughout the year.