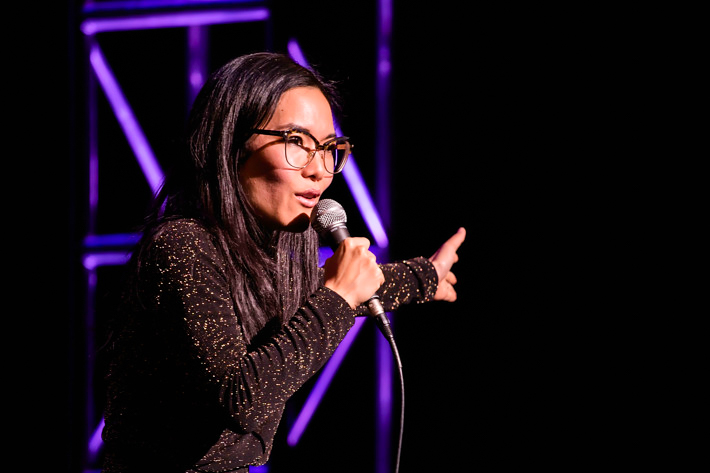 For standup comic and TV writer Ali Wong, the last year has brought on some pretty big life changes. Almost exactly a year ago on Mother’s Day, her standup special “Baby Cobra” aired on Netflix. The show was met with widespread acclaim; critics and viewers alike praised Wong’s bold, honest, and raunchy humor. Since then, Wong has been busy on the road, touring with new material and performing with a jam-packed schedule of shows (over the course of last weekend, she performed a whopping six shows in New York City). She’s also continued working at her second job as a writer for the ABC sitcom “Fresh Off the Boat,” all while raising her two-year-old daughter, Mari.

Motherhood plays a large role in Wong’s standup material. In “Baby Cobra,” she performed onstage while seven months pregnant, making poop jokes while donning a curve-hugging black and white striped dress. This getup was eventually appropriated into Halloween costumes by Ali Wong fans around the globe, and was widely perceived as a hallmark of Wong’s fearlessness.

“It’s very rare and unusual to see a female comic perform pregnant,” Wong proclaimed onstage during “Baby Cobra.” “Because female…comics don’t get pregnant. Once they do get pregnant, they disappear.”

Wong defies both the notion that mothers can’t be funny and the idea that becoming a mother stamps a date of expiration on a comic’s ability to be vulgar and raunchy. According to Wong, male comics don’t usually face this predicament. They can continue performing while the mother cares for the baby and undergoes invasive physical changes to her body. Male comics can make jokes about an “annoying baby at home,” get a few laughs, and be praised for doing the bare minimum in childrearing. The mother, all the while, sits at home with bleeding nipples and a stretched-out vagina. She’s in pain and she hasn’t slept in days. “This is why we need maternity leave!” Wong cried out during her Town Hall show last weekend. She has the unique gift of balancing graphic toilet humor with a subtle political message, all while nailing her comedic timing.

Her skills as a performer and writer have, of course, paid off. A little more than a year ago, Wong admitted listing her shows on Groupon when seats wouldn’t sell, which was embarrassing and funny all at once, but certainly far from the reality of her fame now. Six sold-out shows at Town Hall, along with many others to come, is no small feat, but even Wong herself admitted that her fame has caught her off guard and resulted in some pretty hilarious and self-reflexive run-ins.

During her set at Town Hall, Wong spoke of bartering for a bicycle helmet she found off Los Angeles Craigslist, and how in the heated moment of arguing vehemently for a discount, the owner of the helmet—who seemed to be a college student strapped for cash—interjected and said, “Wait… aren’t you Ali Wong? Why are we fighting over the price of this bike helmet?”

Sure, Wong might be a successful comic with an equally successful Netflix special now, but as a fellow child of Asian immigrants, I can say this: no matter who you become, you don’t pay the full price tag for anything. Not if you can whip out an arsenal of coupons or argue your way down a few bucks. Children of immigrants don’t waste, and they sure as hell don’t skimp when it comes to money.

Wong was raised in San Francisco, and was born to a Chinese father and a Vietnamese mother. She attended UCLA, where she graduated with a degree in Asian American Studies and developed a penchant for theater. It wasn’t until 2005—at the age of 23—that she tried standup for the first time. After a slew of acting gigs and television appearances centered on her standup, she broke through and achieved widespread recognition with the release of “Baby Cobra.”

In the Asian American community, especially, Wong’s brand of humor and her rise to fame have been ardently celebrated. Comedy has traditionally been a space for men, particularly white men. Women, who are held to societal norms to look “hot” or “sexy,” in order to capture public attention, must straddle a fine line between making bold jokes that can garner laughs out of an audience, but not pushing boundaries to dismantle their image of femininity. In terms of Asian women, there haven’t been many comics who have broken into the mainstream. Margaret Cho comes to mind, but aside from Wong, there haven’t been any Asian female comics who have garnered the same level of recognition since.

Perhaps this is because it’s hard to make it as a female comic, period. As Wong mentioned, there exists a sort of dissonance between motherhood and standup comedy; audiences don’t expect women who have had children to be able to get up on stage and perform the same dirty, brazen jokes as they might have before having given birth. It’s like we expect mothers to live lives of virginal purity, to adopt restraint and “decency” as permanent character traits. But having children shouldn’t diminish a mother’s personhood and agency to carry herself as she pleases, so long as the baby’s well-being isn’t compromised. Wong knows this, and hasn’t stopped speaking her mind, whether it be from telling detailed narratives of sad post-maternity vaginas to calling out white guys who are a little too quick to tell her about their Asian girlfriends.

As an Asian-American woman, it’s been an absolute joy to see Ali Wong’s sudden rise to stardom. Not because I ever needed proof to remind me that girls or Asian girls could be funny, but because I’m sure there are other people out there who did. In “Baby Cobra,” as well as her newer material, Wong reaffirms this idea with no doubt to spare.

For a list of upcoming shows that Wong is set to headline, visit her website for her complete tour schedule.