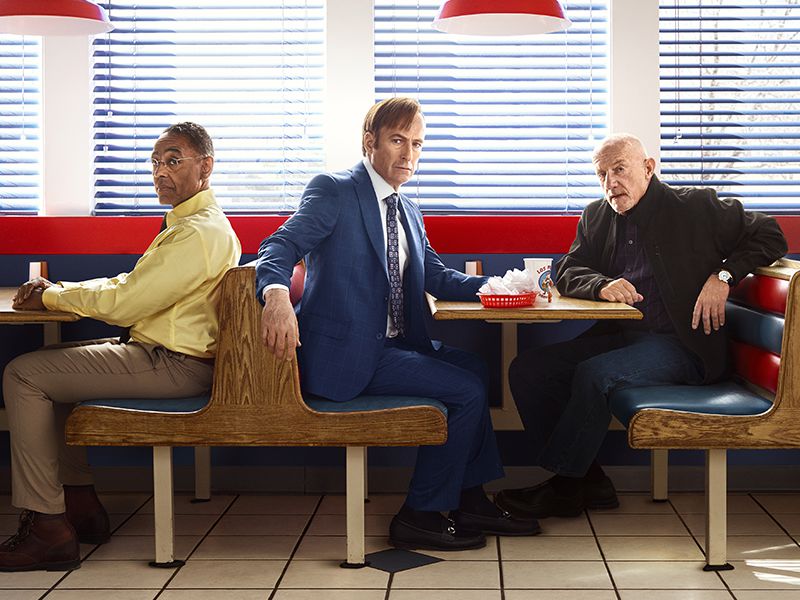 Origin stories have largely been corrupted by 21st century Hollywood to become overly saturated fan fiction, offering little to no aesthetic or narrative value (see “Rogue One: A Star Wars Story,” “Rise of the Planet of the Apes,” or just about any superhero movie that your one annoying friend insists is different from all the others). Spinoffs carry an even worse connotation with them. Yet, somehow, AMC’s “Better Call Saul” flourishes in its third season, despite working within both genres, and perhaps even transcending them.

Showrunner Vince Gilligan initially faced ridicule when it was announced that there would be a spinoff of his Emmy Award-winning and quasi-dynastic show, “Breaking Bad”—one that would center around his chef d’oeuvre’s free-wheeling, amoral lawyer who proves to be more of a huckster than sound legal counsel. Yet Saul Goodman (a career role for Bob Odenkirk) was a scene stealer throughout the five seasons of “Breaking Bad,” despite having a minimal back story and less screen time than many of the show’s quintessential characters. And so arrived “Better Call Saul,” a title that came from a hammy ad which caught the attention of “Breaking Bad” protagonists Walter White and Jesse Pinkman (Bryan Cranston and Aaron Paul, respectively).

Much of the first two seasons of “Better Call Saul” was dedicated to developing his backstory as Jimmy McGill, a mostly straight-laced lawyer who cuts corners but never breaks bad. Two relationships have defined Jimmy throughout these first two seasons: a tense relationship with his older brother, Chuck (Michael McKean), and a percolating romance with his coworker, Kim (Rhea Seehorn). Jimmy and Chuck become increasingly estranged this season, with Chuck’s lawyerly piety and strange condition—one that renders him nauseous and in shock when he encounters invisible waves from any electronic device—forcing Jimmy down a darker path after the law comes between them. Kim remains Jimmy’s saving grace for now, but her sharp wit, which keeps her several steps ahead of him in legal and social intelligence, coupled with Jimmy’s increasingly absurd bêtises, may make fans want to savor Seehorn’s outstanding performance while it lasts.

What sets this season apart is the introduction and development of crucial “Breaking Bad” characters, as well as a critical examination of drug cartels that don’t involve Jimmy, at least for now. This has come with standout performances from two perennial “Breaking Bad” favorites: Mike Ehrmantraut and Gustavo Fring (Jonathan Banks and Giancarlo Esposito, respectively). Ehrmantraut, perhaps the moral compass of the entirety of Gilligan’s franchise so far, continues to endear himself to fans by begrudgingly committing crimes to help his vulnerable family and to maintain a sort of vigilante justice. Fring, who has entered the highest realm of enigmatic villains, allows for fans always miffed by the dark realms of the cartel to get a peek behind the veil, whether south of the border or behind the counter of Los Pollos Hermanos, the iconic proxy business for Fring’s drug empire.

The slow pace of the show has come into question as a potentially negative quality, which is ironic given that one of the biggest criticisms of “Breaking Bad” was that it was far too intense and moved at such a pace that it rendered the average viewer unnecessarily anxious. Character development takes time, and “Better Call Saul” has done a magnificent job at that over the course of its first few seasons. Frankly, “pace” for loyal “Breaking Bad” fans might just be a euphemism for lack of gratuitous violence, as there is undoubtedly a disparity between the two shows.

Psychological examination is preferred in “Better Call Saul” over the pure suspense of “Breaking Bad.” This is a positive evolution for Gilligan, who could have easily phoned it in and made a cash grab in fan fiction. Instead, he made some tweaks to his brushes and palette, trading in his renowned busy landscape painting for portraiture.

One of the chief reasons “Breaking Bad” was taken seriously as a show was because of its cinematography. It’s what made people tune in even after they were apprehensive upon hearing the absurd abstract pitch: “It’s about a high school history teacher who cooks meth.” While Gilligan cleaned up awards and gained much deserved critical acclaim for “Breaking Bad,” he truly earned his place among the best television auteurs—such as David Simon (“The Wire”), David Chase (“The Sopranos”), and Wesleyan’s own Matthew Weiner ’87 (“Mad Men”)—by expanding his repertoire with the careful character examinations in “Better Call Saul.”

While fans salivate over any scene involving Fring or Ehrmantraut, Gilligan faces a far greater challenge in developing characters that didn’t appear in “Breaking Bad.” On this front, he’s done a masterful job, especially with Kim Wexler and Chuck McGill.

It would be lazy to draw a direct comparison between Kim and Skylar White (Anna Gunn) from “Breaking Bad” as strong female leads. Seehorn’s performance is, in many ways, more liberated from that of Gunn’s in the sense that she doesn’t have to play from under the shadow of a sociopath in Cranston’s Walter White. Seehorn plays the sharpest character in the show despite having to confront several obstacles from which her male counterparts are exempt. She faces a glass ceiling and a sexist corporate culture at the firm she worked at under Jimmy’s brother, Hamlin, Hamlin & McGill (Jimmy never made partner to match the double Hamlin in the name). While her falling out with Jimmy is inevitable, Kim’s top-notch portrayal by Seehorn makes us want her to stay.

The most striking aspect of McKean’s performance as Chuck is the way in which he is viscerally able to convey a disease that most likely doesn’t exist. From forcing any guests in his home to leave their phones in the mailbox to wearing a tin-foil sheet under his suit when appearing in court, Chuck’s illness could easily seem like more of a post-modern commentary on the proliferation of technology were it not for McKean’s ability to convince us that it’s real.

The real beauty of Gilligan’s “Better Call Saul” is that it’s equally enjoyable for someone who’s totally unfamiliar with the franchise and a fan looking to play character bingo. Gilligan has promised for this season to be the one where Jimmy officially converts to Saul, a persona that has so far only been shown in film noir vignettes. Until Jimmy breaks bad, it’s a joy to sit back and ponder the portrait.