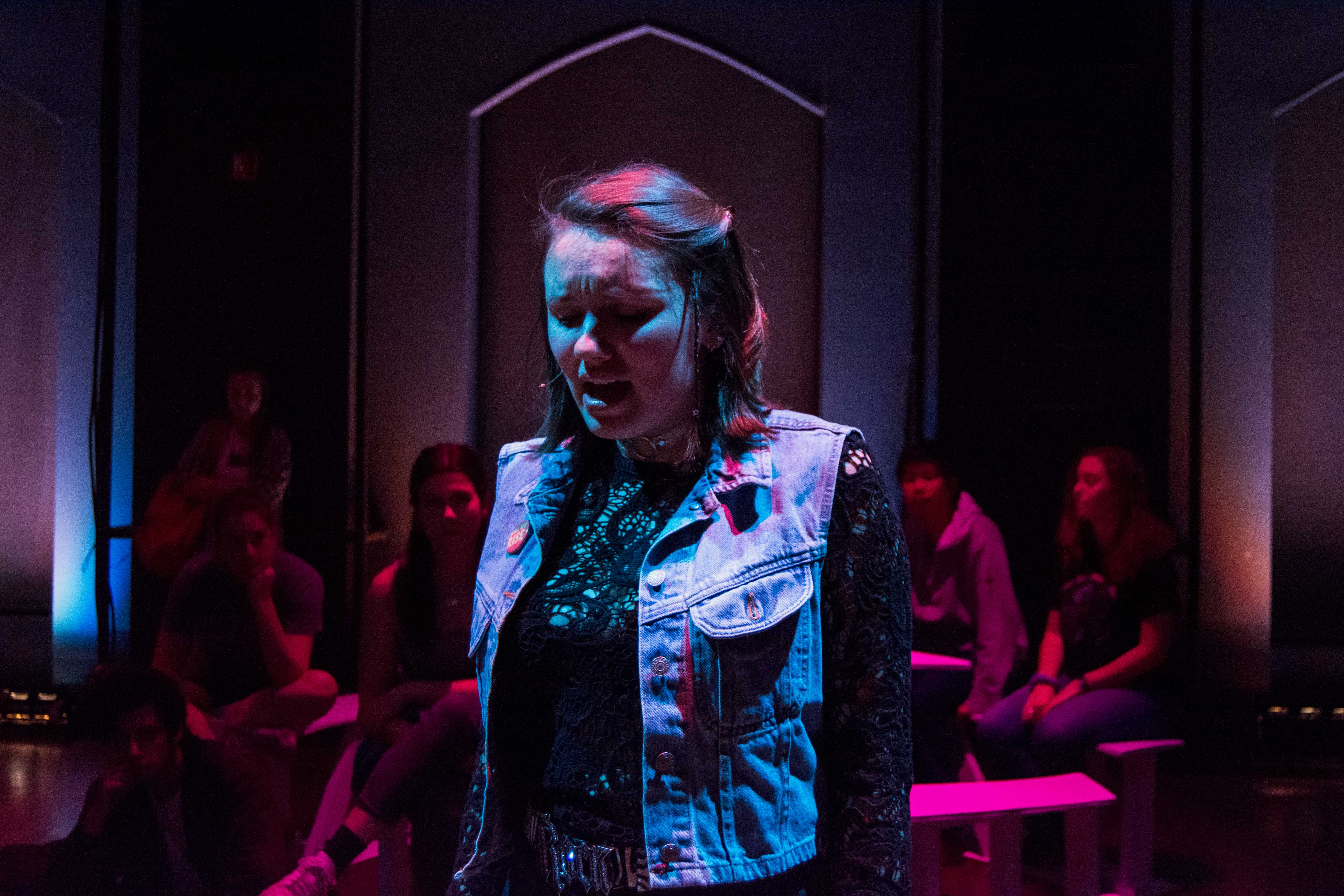 What happens when you cross an angsty high school love triangle with a coming-out story? Oh, did I mention it’s set to exclusively Avril Lavigne tracks? No?

Well, it is. “Things I’ll Never Say,” written and directed by Maya Herbsman ’17, is centered around Susan B. Anthony High School students Shay (Ava Thornton ’20), Charley (Alina Whatley ’18), and Ally (Sophie Brett-Chin ’19). The story opens on an awkward encounter between Shay and Charley, still stinging from a recent breakup and attempting to maneuver the discomfort of bumping into each other in the hallways. Meanwhile, a currently straight Ally wanders the halls, feeling friendless, much like her recently dumped sister, Olivia (Hope Fourie ’19). Soon enough, Ally meets Charley, and the two embark on a challenging relationship marked by Ally’s navigations coming to terms with her own sexuality and Charley’s not-yet-dormant feelings toward her ex. The love triangle is occasionally embellished by the presence of Ally and Olivia’s father (Russell Goldman ’17, applying his customary irresistible silliness), whose dual role as the school counselor provides added complications to the layered drama.

The most important part of the plot, aside from it being Ally’s coming out story, is that it’s a love triangle. And in a love triangle, someone is always unhappy, which leaves endless room for Avril’s heartbreak-fueled punk lyrics.

The immersive set in the ’92 comprises three cafeteria-style tables, around which are arranged the cast of fourteen along with their audience. Certain scenes take place between this outer fringe of tables, while others require watchers to turn towards the stage, where Ally’s bedroom is set up. Clad in punk-inspired outfits that range from floral Docs and ripped jeans to checkered skinny jeans and a belt with “ROCK” spelled out in rhinestones, members of the ensemble periodically drift between tables, gossiping and whispering to each other like the high-school students they play.

The 19-song performance includes over 20 Avril Lavigne tracks (since a few of them are mash-ups), most of which are performed by a seven-piece band (with the exception of one soundtrack, blasted during a party scene). Herbsman focuses mainly on the truly dark Avril songs, but sprinkles in more popular classics like “Complicated,” “Girlfriend,” and, of course, “Sk8er Boi.” Most of the tracks come from 2002’s Let Go, which was the album that inspired the musical in the first place.

“My sophomore spring I was thinking about a show I might want to direct,” Herbsman recalls. “I was sitting in the car with a friend and we were listening to Let Go, Avril Lavigne’s first album, and I was, like, ‘Wow, I could make a really good coming-out story out of these songs.’”

Why a coming out story? Mostly for the sake of adding a voice that’s for the most part unheard in the theater community.

“As a queer theater artist, especially a queer female theater artist, I have never really gotten to see my story represented onstage,” Herbsman said. “I mean, there’s ‘Fun Home.’ But as someone who really loves the theater and really loves musical theater, I never got to see my love story—the love story that I would want to have—onstage, and as a director and a creator, I really try and put out into the world what I think needs to be there.”

Integral in the telling of a female-oriented coming out story are the cast and crew members collaborating on the production. Herbsman worked with a largely queer cast (mostly just because of who the show attracted) and deliberately carved out only one male role in the entire production.

“I obviously didn’t cast based on sexuality, but we attracted more queer women, and when I was creating my team I made a really conscious effort,” Herbsman said. “I made a very conscious choice. In an earlier draft, there was a boyfriend character, but he went pretty quickly because I realized I wanted to tell a story just about women.”

And, yes, she confesses, it’s partially autobiographical. While none of the characters are directly based on herself, Herbsman has infused little parts of her own life experiences into each of the personalities onstage. What’s more, she’s also drawn on stories from others, interviewing her queer female friends on break-ups, coming-out stories, and past relationships, and even going through old voicemails, text messages, and letters from exes. The end result is, yes, fun and joking on the surface, but also a genuine investigation into what makes and breaks relationships and the many layers that lie behind the romantic pairing of two individuals, particularly when those individuals are two girls.

“Things I’ll Never Say” will run Thursday and Friday at 8 p.m., and Saturday at 9 p.m. in the ’92 Theater. If a lesbian love triangle set to early-2000’s punk-pop doesn’t interest you, I don’t know what will.