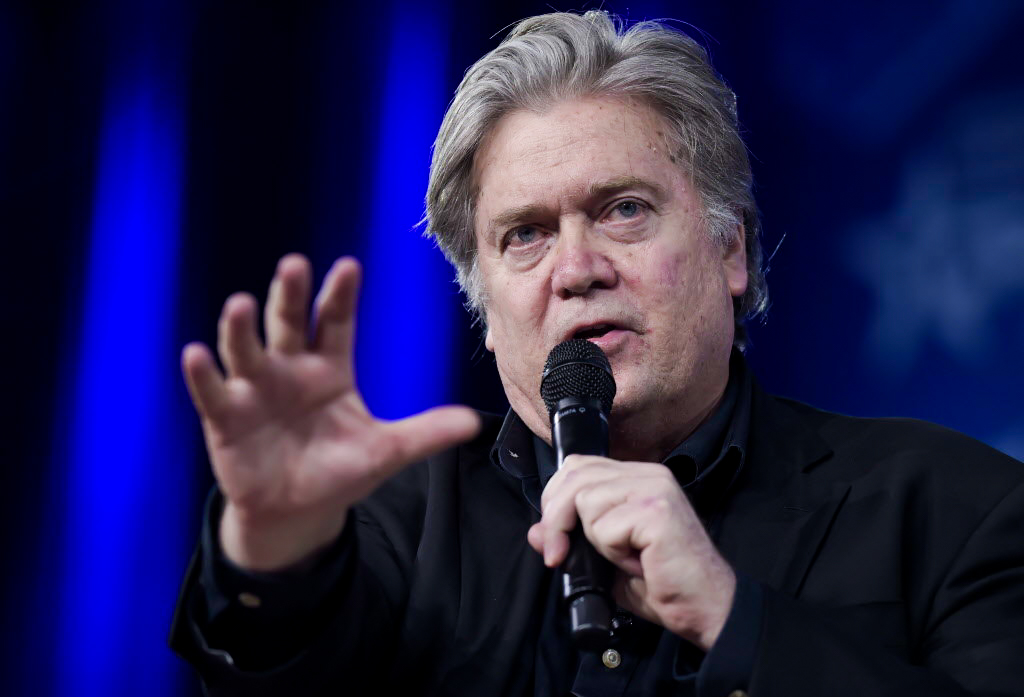 In science and philosophy there’s something known as the Multiverse theory, which proposes a reality where infinite universes exist. As such, anything you can possibly imagine is currently happening in an alternate universe. There is a universe in which ferrets have established a perfectly peaceful society, ruling over humans and traveling by means of portals located in the drains of bathtubs. There is a universe in which people are legally restricted from wearing t-shirts, because these shirts are seen as a political affront to the government, which is, naturally, ruled by fascist pillows.

You get the idea.

This being the case, I would like you to imagine a world in which Steve Bannon—the famously bloated, alcoholic, abusive, racist, anti-semitic, Breitbart-founding, White House chief strategist—wrote a movie. Not just any movie, mind you. No, this movie is an adaptation of Shakespeare’s “Coriolanus.” It also happens to be a rap musical. And—for the sake of extra absurdity—it takes place during the 1992 LA riots. Supposedly, according to the theory of the Multiverse, such a reality exists.

We have the privilege of living in it.

Enter “The Thing I Am.” Co-written with Julia Jones, writer of such well-known fare as “Discretion Assured” (in which a bunch of rich white dudes do some embezzling and murdering and propositioning of each other’s wives) and “In the Face of Evil: Reagan’s War in Word and Deed” (in which that rich white dude who ignored AIDS as long as he could beat the ever-loving crap out of the real plague: Communism), this un-produced screenplay is the touching story of how some fat racist managed to make Shakespeare’s writing whiter than it already was. If that sounds reductive and petty, I encourage you to watch the table read of the script, generously organized by Now This. When you’re done I promise you’ll know nothing more than the fact that it’s possible to write a screenplay, be white, and use the n-word more than Quentin Tarantino.

“The Thing I Am” is nonsense. It’s vile, stupid, and morally despicable, but first and foremost, it’s nonsense. If it showcases anything, it’s this: if you’re a talentless hack who wants to make a name for yourself in a field you know nothing about, you’re better off vomiting your resume into the Lincoln Bedroom than submitting your long festering script to those Hollywood elites.

The table read is twenty minutes long. Is this abridged or the entire script? I couldn’t tell you. Why? Because this screenplay is such pretentious unintelligible trash that there’s no sense of whether or not additional scenes might make sense of it all. There’s no coherent logic moment to moment, nor is there a sense that Steve Bannon has ever stepped outside in this world, judging by the way he imagines people of color talking. There’s a relatively infamous moment from “The O’Reilly Show” in which the titular former host and sexual predator speaks about visiting a famous New York “soul food” restaurant and being shocked that the Black patrons were behaving the same way white people behave in restaurants. That vulgarly racist, magnificently stupid observation is still miles ahead of what’s presented by Bannon’s screenplay.

It’s perhaps even more confusing because, as opposed to probably literally everything else Bannon as done, “The Thing I Am” is clearly not meant to be racist propaganda. Classmates of Bannon from Harvard, where he received an MBA, and Georgetown, where he received an MA (Bannon has surprisingly good credentials for someone who seems to fail left and right, and who looks like a drowning victim in a poorly budgeted episode of “Law and Order”) have repeatedly suggested that he started out as a leftist, and migrated to the far right as a result of bitterness and a desperate need for attention. Listening to the read-through of this script, you get that sense: a picture of man who is, indeed, insanely racist, acutely ignorant, and convinced of his own good intentions. “Thing” seems absurdly certain that it represents truths of Black American life. It seems absolutely confident that it respects the reality of the LA riots. It also seems like Bannon has no idea what caused the LA riots, or how to write Black characters who aren’t Bloods, Crips, or dedicated to cursing with every other word.

As such, “The Thing I Am” is a sort of marvel of unreality. There’s something absolutely baffling about listening to it, and being forced to imagine Steve Bannon (and his former girlfriend, a ten gallon jug of whiskey) typing furiously, counting out the syllables in iambic pentameter and deliberating on how often he can say “motherfucker” without derailing the poetic form. Though I’m personally unsure of the value of forcing Black performers to read through such a pathetic and white supremacist text on camera, it’s almost heartening to realize, tangibly, the ineptitude of Bannon’s racism. Bannon has famously flaunted his academic credentials, throwing around his intellectual weight. Everything he’s ever written is infected with misplaced jargon and five-dollar words. (I have no doubt he refers to himself as a “Harvard Man.”) Still, “Thing” reads and sounds like the ramblings of a college freshman, convinced he’s about to blow your mind because he read eight pages of Camus. It’s bloated (write what you know, I guess), clumsy, and desperate to showcase its author’s intelligence. At the same time, it’s blind and unobservant, childish, and simplistic. I’m also not totally certain Bannon has even read “Coriolanus.”

If it seems as though I’m neglecting to say anything about the substance of the screenplay, that’s because there is none. If it seems like this piece exists solely as a 1500-word joke about how Steve Bannon is an absolutely incompetent, ignorant racist who looks like a decommissioned Macy’s Thanksgiving Day Parade float that was stashed for thirty years in a storage locker infested with termites and then trotted back out just to be messily filled with dirty dishwater, well, watch the read-through and tell me whether or not you can legitimately blame me. The equally infuriating and laughable thing is, despite the script’s presumption that it illustrates the connections between gang violence (which isn’t what defines the LA riots) and war, it seems more like the ramblings of a white guy who really really wanted to be able to say the n-word and pass off his smoldering racism as some form of art. There is, however, a single worthwhile line. At one point, during the table read, actress Niyama Funk gets to say: “Bitch, please! It becomes a man. Breasts nursing look no lovelier than when a forehead spits forth blood,” which is honestly the most baffling combination of words that I have ever heard. They are a nonsensical soup of how this white douchebag has seen Shakespeare spitting and how he imagines a Black person talks. As an added delight, Funk can’t help but break character. She explains, “Sorry, this is the first time I’ve ever said anything like this. We should talk like this more often.”

Ultimately, Coriolanus is killed in a way similar to the play, and gang members carry his body underground. I like to imagine Bannon writing this scene, certain that the image of a dead body going under the earth (you know…like, to Hell) would seem so sophisticated to all the critics. I like to imagine Bannon, who—during his short thirsty stint in Hollywood as a hanger-on and wannabe producer—was described by Sean Penn as “simply another bitter Hollywood wannabe who went rogue by way of toxic narcissistic iconoclasm” and “a conniving hateful bloated punk who despises mankind,” with some big dumb grin on his face, probably telling himself how deep his screenplay was, despite having as much shape as Play-Doh that suffered a cycle in a washing machine.

Is there anything to take away from “The Thing I Am?” Well, you can gather that Bannon is as terrible a screenwriter as he is a person. It also more or less proves that, yes, every single white dude has some horrid amateurish screenplay waiting in the wings. Personally, however, I like to think that whenever some alt-right apologist tries to criticize me on the internet for comparing Bannon to Hitler, I now have the luxury of reminding them that both were cowardly Nazis who decided to infect governments with their batshit racist white supremacist hideously violent worldview, because no one validated their shitty art.