Remembering Jonathan Demme and Looking Back on “Silence of the Lambs” 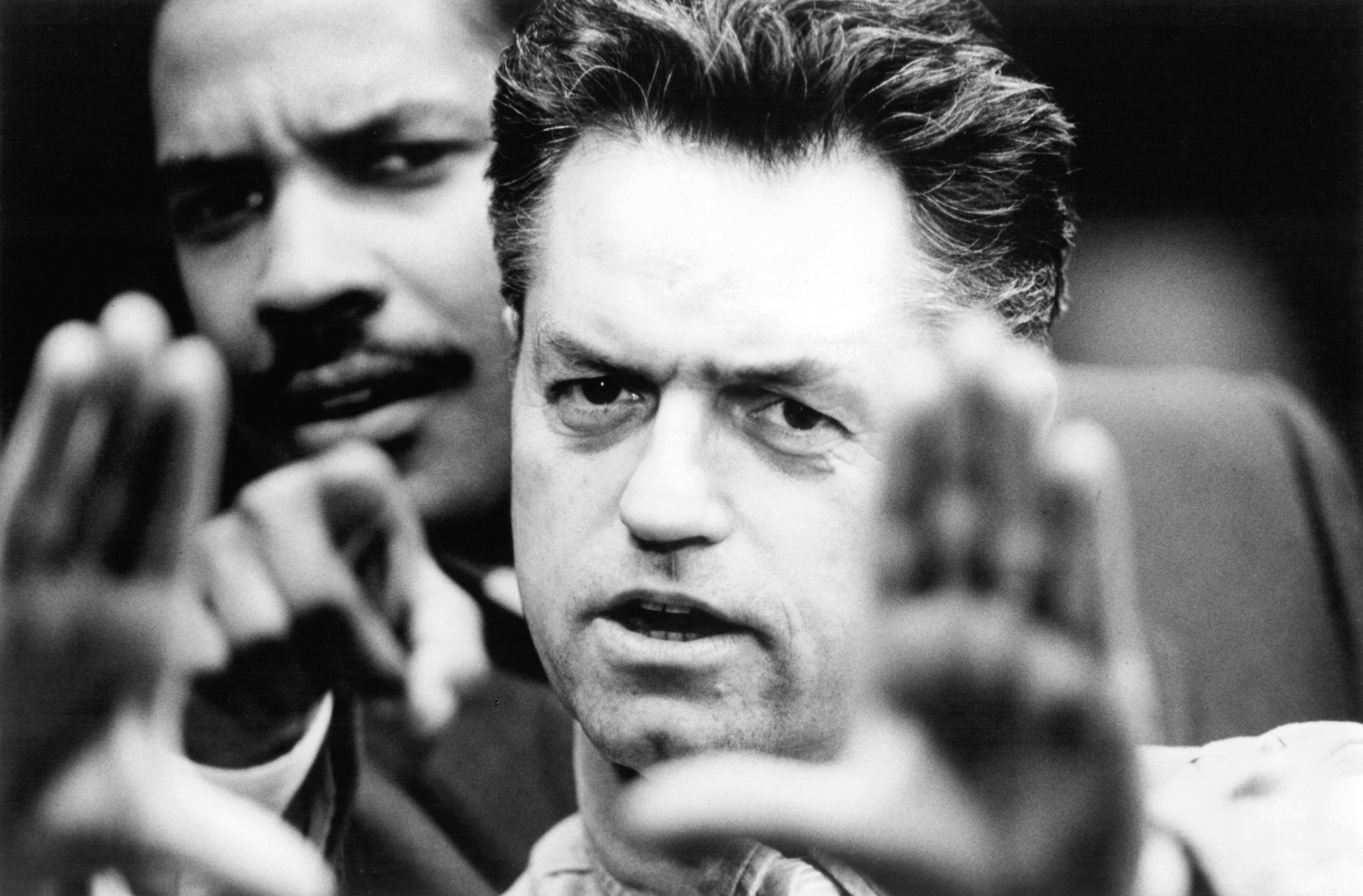 This past Wednesday, cinema lost one of its most understated and versatile auteurs in director Jonathan Demme. Known in his industry for his voracious love of cinema, his deep compassion, and his fearlessness in transcending genre and style, Demme left behind one of the most idiosyncratic filmographies of any modern director. From “Stop Making Sense” to “Rachel Getting Married,” there is an indisputable wealth of pictures one might revisit to understand Demme’s range and quiet genius, but — perhaps rather surprisingly — it is Demme’s most well-known film that might best illustrate the breadth of his skills: 1991’s “Silence of the Lambs.”

“Silence,” starring Jodie Foster and Anthony Hopkins, is a pulp film wearing the skin of a prestige picture (yes: pun intended). Often credited as the only horror film to ever win the Academy Award for Best Picture, this adaptation of Thomas Harris’ second Hannibal Lecter novel is a malicious, clever, and perfectly calibrated masterpiece of shock and tension. By now, most probably know the story, but for the uninitiated: FBI director Jack Crawford (Scott Glenn) enlists the help of trainee Clarice Starling (Jodie Foster) in the ongoing hunt to catch serial killer Jame Gumb (Ted Levine), who has been kidnapping and skinning women, under the press-given moniker of “Buffalo Bill.” Crawford hopes to gain the insight of Hannibal Lecter, a brilliant psychiatrist and gleeful cannibal, and sends Clarice to interview him. Over the course of the film, Lecter engages Starling in a number of mind games, offering her information about the possible identity of Buffalo Bill in exchange for insight into her own life: “quid pro quo,” as he matter-of-factly puts it. Ultimately, Lecter escapes from captivity while Clarice catches Bill before he can kill the daughter of a senator, setting up the baroque, nonsensical, and thoroughly enjoyable Ridley-Scott-directed sequel, which bears little resemblance to Demme’s film.

It’s notable that Demme was not the first director to bring Hannibal Lecter to the silver screen. Five years earlier, Michael Mann adapted Harris’ previous novel “Red Dragon,” under the title “Manhunter,” in which Lecter (whose name was then spelled “Lecktor”) was portrayed by a great—but far less flamboyant—Brian Cox. (“Red Dragon” would be adapted twice more: first in a serviceable 2002 remake directed by Brett Ratner, that recast Hopkins as Hannibal; and then, as the final storyline in Bryan Fuller’s magisterial reimagining of Harris’ entire mythos “Hannibal,” a TV series unjustly canceled after its third season.) Still, the fact that “Manhunter”—when it is remembered—is seen as almost supplementary to the story of Hannibal Lecter and his creator, speaks to the absolutely definitive work Demme accomplished.

It’s perhaps easy to deny Demme due credit in service of praising Hopkins’ performance (which is indeed brilliant), but this is thoroughly wrongheaded, firstly because Hopkins has so little actual screen time and secondly because Hopkins as Lecter is far from the only dynamic element in the film. Nearly every aspect of “Silence” is a triumph, from Howard Shore’s fantastic score to the movie’s understanding of when to be gruesome and when to be restrained to the performances of supporting actors who give their minor roles a truly lived-in texture. Hopkins’ performance is certainly the most eye-catching, but Foster, Glenn, and Anthony Heald (as Frederick Chilton, the slimy, pompous, attention-seeking director of the sanitarium in which Lecter is confined) all deliver note-perfect performances. Furthermore, aside from Hopkins’ improvised hiss after describing his decision to consume a census taker who made the mistake of trying to analyze him via a survey similar to that Clarice has just delivered (“Oh, Agent Starling: you think you can dissect me with this blunt little tool?”), the most oft quoted line comes from Ted Levine’s Buffalo Bill as he describes the cosmetic routine he expects of his victims: the chilling “it rubs the lotion on its skin, or else it gets the hose again.”

Which is as good an entry-point as any to the one major flaw of “Silence of the Lambs:” its deeply dated and problematic depiction of the fluidity of gender. Though Demme frequently tried to explain (Harris is far more explicit in his novel about this than Demme’s film could be) that Buffalo Bill was not transgender but simply trying to get as far away as possible from a body and soul he hated, the film ultimately feels deeply transphobic. It depicts the process of transition as alternating between violent (Bill skins his victims to create a woman suit) and strange (such as when Bill tucks his cock between his legs and dances in front of his mirror). Even the film’s explanation that his mental state is not founded in gender dysphoria doesn’t do enough to excuse the fact that the villain is depicted as a deviant whose superficial fascination is reminiscent of a legitimate unpacking of gender too often met with hateful deadly violence. In the aftermath of the film’s release, Demme took accountability for this, explaining that the reaction to the film opened his eyes to how few positive representations of the LGBTQ community existed onscreen. It’s simply a shame he didn’t recognize this during the making of the movie.

If one can look past this unfortunate current in “Silence” (and it’s more than understandable if many cannot), the picture does present a blueprint for how to create and release tension, how to depict gruesome violence while focusing on the humanity of victims, how to craft a picture that is more than the sum of already incredible parts, and (most interestingly to me) how to create a work of art that doesn’t crumble under the weight of an outwardly arresting minor character.

A brief and controversial digression: I do not like Christopher Nolan’s “The Dark Knight.” I certainly did when I first saw it, but the years have not been kind. While my major complaints center around Heath Ledger’s performance as the Joker, they have nothing to do with the quality of that performance, but rather that performance’s ability to sink a film not strong enough to shoulder it. In many ways, Ledger’s Joker and Hopkins’ Lecter are very similar: irredeemable psychopaths who attempt to seduce the world around them into legitimizing their violence through charm and (somewhat more so in the Joker’s case) half-baked philosophy. While Nolan’s picture never endorses the Joker (he is, after all, the villain), it is enamored with him, and is happy to make the character its center of gravity. Demme, on the other hand, allows space for Hopkins’ Lecter, but doesn’t center the picture around him. He allows Lecter to seduce and manipulate the audience, but never the film itself. In “The Dark Knight,” Batman and Harvey Dent — our ostensible main characters — are almost terminally boring (Harvey as Two-Face becomes intriguing, but remind me who caused that little transformation?). Clarice Starling is not. Although Hopkins is the actor most often cited when “Silence” comes into discussion, Jodie Foster delivers the best performance — a fact only amplified by the extent to which her performance melds so perfectly with Demme’s own style. Foster is sympathetic and understated, but also quietly confident in her strengths. These descriptors could be, likewise, applied to the film as a whole, and Demme as a filmmaker. They were a perfect pairing.

Just as with his subtlety, Demme’s versatility is all over “Silence.” This is a film that switches between scenes of brutal pulpy violence, operatic melodrama, sly humor (I will never not laugh at Lecter’s: “Oh, and Senator? Just one more thing—love your suit”), and cold realism. For most directors, this would result in crushing and disorienting tonal dissonance, but Demme was miraculously able to meld them all: craft a cinematic work that neatly encompassed all the disorganization, thrills, and smarts of its source material — and that brilliantly captured all the horror, redemption, and intrigue of its world.

Jonathan Demme will be sorely missed. His work will be fondly remembered. It’s easy to simply accept the classics of a deceased filmmaker as classics, and to watch them with a sort of complacency about their quality. “Silence of the Lambs,” however, is a chilling argument against that. It’s a picture of intricacy and craftsmanship that can be as exciting to new viewers as it was twenty-five years ago, as exciting to longtime fans now as they were during that first screening.

Also, this is the only Oscar-Winning film in which a cannibal wears his victim’s face to sneak out of captivity. So, there’s that.