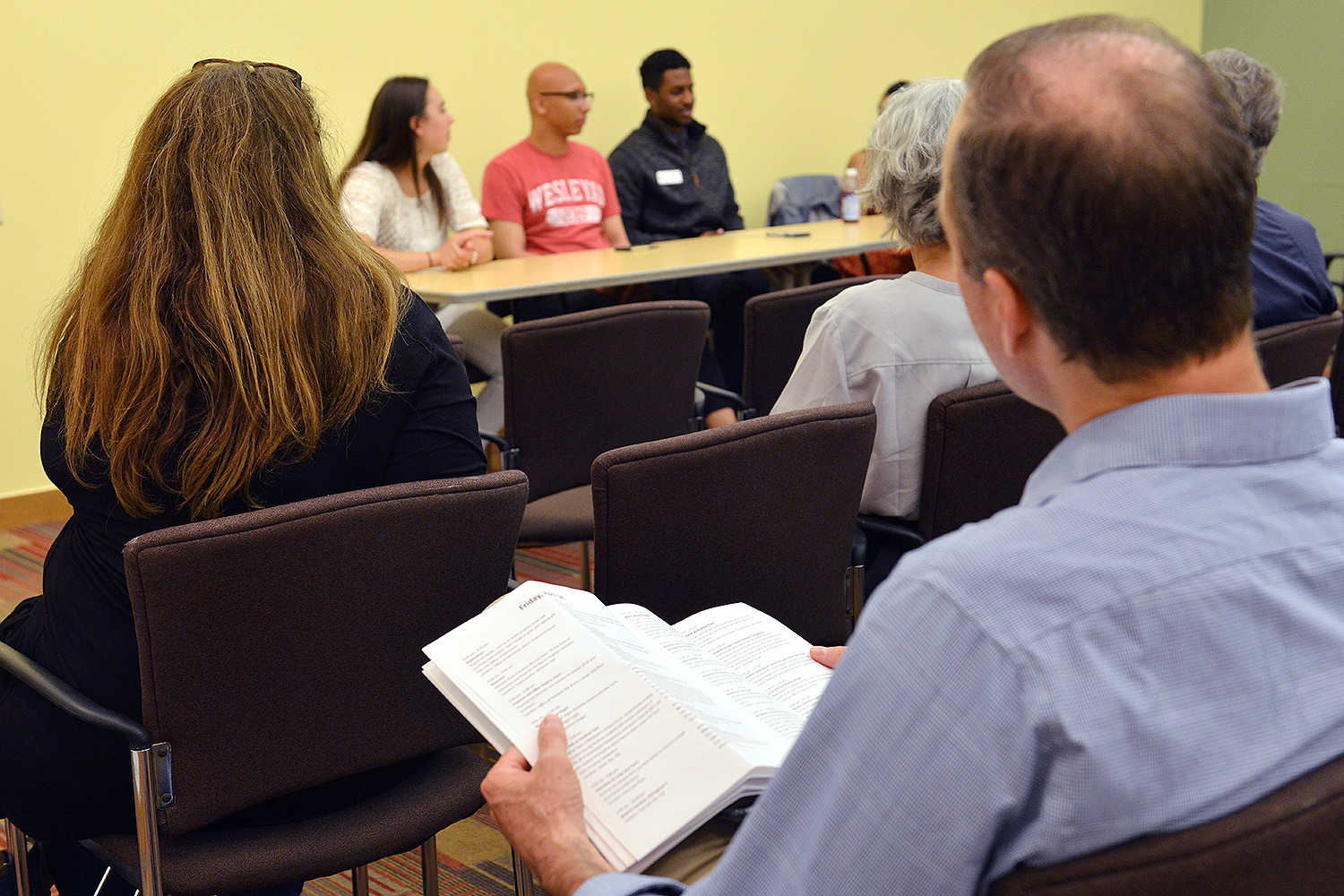 The class of 2021’s record number of applicants provides the University with uniquely new opportunities and headaches. This week’s WesFest bolstered a bevy of events geared toward prospective students and parents, effectively selling the school during a critical time in the college selection process with the May 1 deposit deadline looming.

WesFest’s chock-full schedule featured a lecture from Beats by Dré President Luke Wood ’91 who spoke on his Wesleyan experience from his position at the helm of the 21st century’s headphones empire. Tours of campus abounded, and classes on Wednesday, Thursday, and Friday were open for prospective students and the rare daring parent to sit in on. There was also Mabuhay, a celebration of diversity sponsored by the University’s Asian-American community. There were also events specifically for prospective students of color throughout the three days.

Brandishing an edgy red font and a cardinal silhouette, a thick WesFest pamphlet found its way into the hands of scores of so-called pre-frosh upon their arrival on campus. Key words on the opening page reveal the immediate selling points of the University for the half-week event.

“We hope you will take advantage of as many of the information sessions, student group events, concerts, drop-in hours, and interesting tours as you can!” the pamphlet reads.

Several departments held meet & greets, with some holding open hours if they have dedicated facilities, and many clubs tabled at club fairs.

Off campus, high school seniors and other prospective college students had the chance to read a column in the Huffington Post by President Roth.

Entitled, “Beyond Prestige: Choosing Your College,” Roth writes a version of essentially the same thing he publishes around this time every year, which is essentially a defense of liberal education supported by both timely and timeless specific arguments.

This year, Roth pays special attention to the sheer economic decision-making that comes with choosing a college, which he spoke about in an interview with The Argus earlier this month. Specifically, Roth addressed statistics published in a New York Times article that showed Wesleyan falling just below a list of schools with more students from the top 1 percent of income earners than the bottom 60 percent.

“I think the statistics that the Times article used and that get passed around a lot are chilling, but they’re chilling largely by showing what percentage of students from low-income groups are qualified to get into highly selective schools because of the economic segregation that takes place in the K-12 system,” said President Roth. “So if you look at what percentage of people who get between 750 and 800 on their SATs, who are from the top 3 percent versus the bottom 60 percent, I bet you a Coca-Cola that it will also be disconcerting. Is it because the SAT is biased or because the education system that many people have to live with in this country is terribly unjust?”

Roth explores further in his HuffPo piece the economics behind college admissions and choice.

“For many, of course, the decision will be made on an economic basis,” Roth writes. “Which school has provided the most generous financial aid package? But since the differences in this regard are often small in comparison with the overall costs, the price tag may not tip the balance. Of course, for some families it will, and these folks must often make hard choices about what they can afford. At least they can now do so with the help of ‘net-price calculators’ that give a fair account of true costs.”

Then Wesleyan comes into the picture, where Roth highlights the University’s specific efforts to make college more affordable.

“At Wesleyan, we have developed a three-year (plus some half summers) program that cuts more than 20 percent off the total price for a BA,” Roth writes. “This is a significant affordability initiative, but most students turn out not to be in any rush (despite the high cost) to leave campus. Other schools are finding different mechanisms to make their undergraduate degrees more flexible and affordable. But if you are trying to decide among schools that offer comparable financial aid, how to make the decision?”

This, ultimately, is where more philosophical questions replace the economic ones, at least in Roth’s view. More broadly, it is perhaps this turn—viewing a college as more of a way of life than simply a product to be sold or a prestigious accreditation—that separates Wesleyan from the pack.

“Your college education should prepare you to thrive by creating habits of mind and spirit that will continue to develop far beyond one’s university years,” Roth writes, responding to frequent urges to find a college that lands students a lucrative first job. “Thriving means realizing your capabilities, and a liberal education should enable you to discover capabilities you didn’t even know you had while deepening those that provide you with meaning and direction. A strong college education, one infused with liberal learning, helps create what philosopher Martha Nussbaum has called ‘new spaces for diverse possibilities of flourishing.’”

That immaterial, long-term, and almost indescribable feeling of being part of a unique culture at a university is what Roth preaches to a broad readership, and what the team in Admissions is trying to set the stage for by making sure that WesFest goes off without a hitch. Ultimately, the potential to thrive is what Roth argues should be at the fore of a prospective student’s college choice.

“The college you choose should be a place at which you can thrive, finding out so much more about yourself as you also discover how the world works, how to make meaning from it and how you might contribute to it,” Roth writes. “Those kinds of discoveries will set you in good stead for a lot more than four years.”