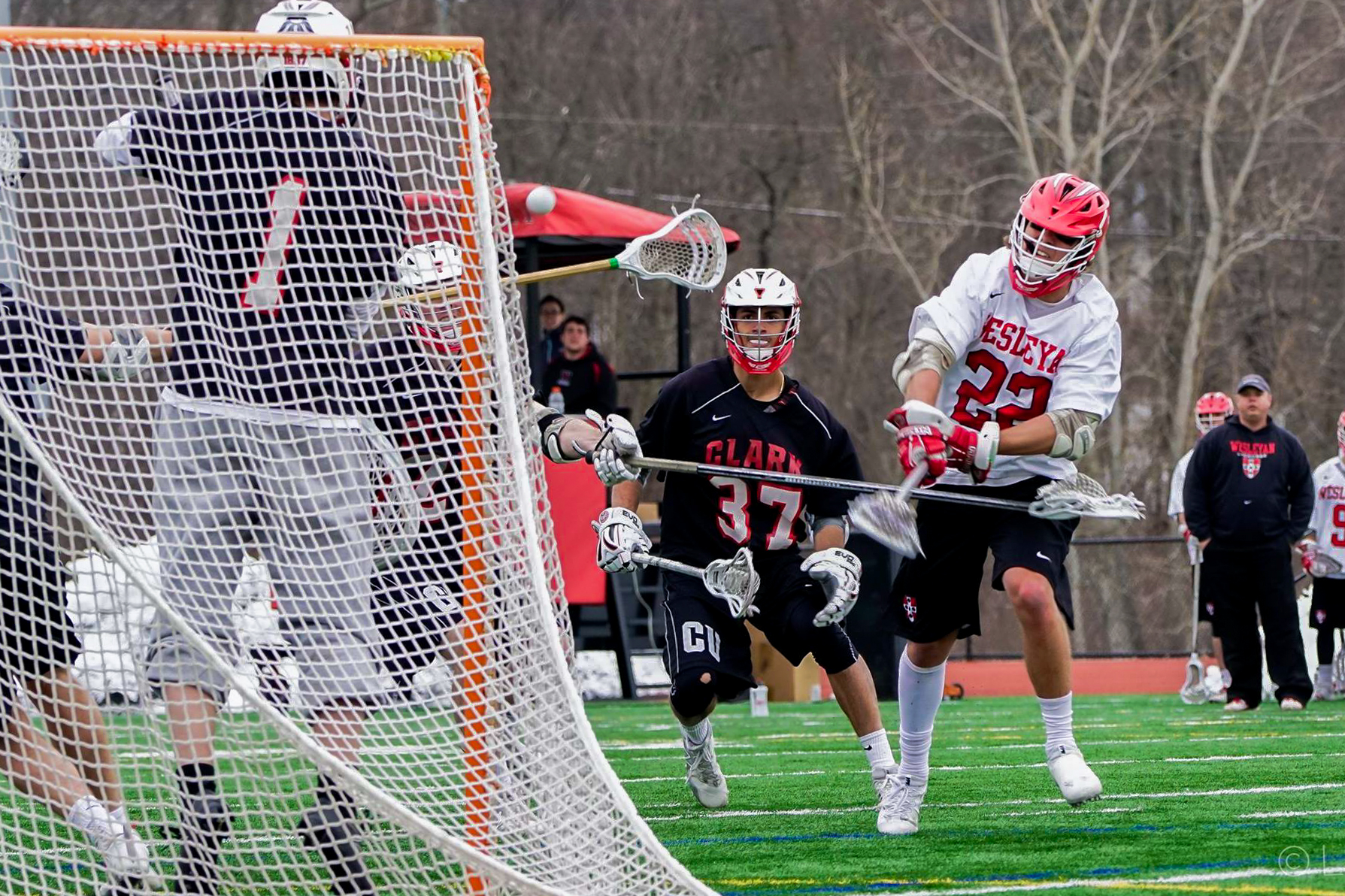 The men’s lacrosse team is one of the highest ranked teams in the country, sitting at 13th after a poll on April 3. Playing in the NESCAC, one of the toughest conferences in the country, only proves that the team’s success is no fluke. The Cards currently hold an 8-1 with a 4-1 conference record. The team lost their first game to 15th-ranked Bates but hasn’t stumbled since, recording impressive victories over No. 10 Middlebury and No. 11 Amherst in the last two weeks. While Wesleyan’s high ranking spot has thrust the team into the national spotlight, the Cards aren’t letting the hype go to their heads.

“In my experience, our national ranking doesn’t change how we approach each day,” said Owen Ward ’20. “It is a nice honor to be ranked so highly, but as a team we are only worried about ourselves and the next practice or game.”

Over spring break, the Cards were able to take down Middlebury, one of the NESCAC’s top teams. The game started close, finishing 4-4 after the first quarter and 10-9 in favor of Wesleyan after the second. It was a game of momentum; in the first quarter, each team went on a 3-0 run, and in the second both squads posted 4-0 runs. The star of the first half for the Cards was Taylor Ghesquiere ’18, who opened the scoring for Wes and added three more goals by the end of the half. The game went back and forth in the second half before the Cardinals were able to open up the scoring with a 4-0 run, buoyed by three goals from Harry Stanton ’18. Fueled by Stanton’s offense, the Cards secured a 16-12 lead late in the game, and managed to hold on for a 17-15 upset. Stanton finished the contest as the leading scorer for Wesleyan, posting six goals and two assists.

Wesleyan handily won the three games prior to their matchup with Middlebury, earning victories against Roger Williams University, Hamilton, and Vassar College. The Cards also won the next three games against Union University, Clark University, and Colby before facing off with Little Three rival Amherst.

Defense dominated the first half of the Amherst tilt, with the score knotted at 6-6 entering halftime. Ghesquiere and Stanton led the Cardinals in that half with two goals apiece. In the third quarter, however, the Cards put their toughness and skill on display. The team scored seven goals in the quarter, including five from Tom Dupont ’17, and led 13-10 entering the final quarter. The final quarter of the match proved to be a scoring bonanza, but the Red and Black were able to top the newly-minted Mammoths 17-13 when the final whistle sounded. Dupont was at the top of the statistics sheet for the team, ultimately scoring seven goals for Wes. He starred alongside fellow senior Ted Bergman, who notched 19 saves in goal.

“I am extremely proud of the effort today,” said head coach John Raba. “Our team stepped up in the second half, and we were mentally tough when it counted. We are happy with a great NESCAC win on the road against a very good team in Amherst. Senior Ted Bergman was outstanding in net tonight, and Tom Dupont had a monster night and played like an experienced veteran.”

“They’ve gotten the better of us the last few years and nobody on this year’s roster had beaten them before, so it definitely felt good to get that off our backs,” said captain Quinn Mendelson ’17. “This one was sweet.”

The team’s offensive firepower is largely due to the efforts of Stanton and Ghesquiere, who have each scored 33 and 26 goals. While Stanton has also notched 13 assists, the primary distributor on the team is Carter Hawthorne ’19, who has racked up 25 helpers over the course of the season. Bergman has led the team in goal with a 59.3 save percentage and, more importantly, has notched eight wins for the team.

The Cardinals will look to continue their hot streak when they host Williams on Saturday, April 8. The stakes of the game are enormous, as a victory on their home turf would crown the Red and Black Little Three champions. Following the Williams match, the team has two major tests left: an away battle against 16th-ranked Bowdoin and a home game against Tufts, the second-ranked team in the country. Of course, no game in the NESCAC is easy, and the Cardinals will look to finish the regular season strong. As the season heads towards dusk, the seniors are savoring every second they have left in a Cardinal uniform.

“Honestly for me as a senior, I’m not looking ahead all that much,” Mendelson said. “This is my last season and I’m trying to make the most of each game. We’re all having a lot of fun right now, and taking it one game at a time is just fine for me. When playoffs start we’ll be ready, but right now I’m focused on Williams and the Little Three Championship this Saturday.”