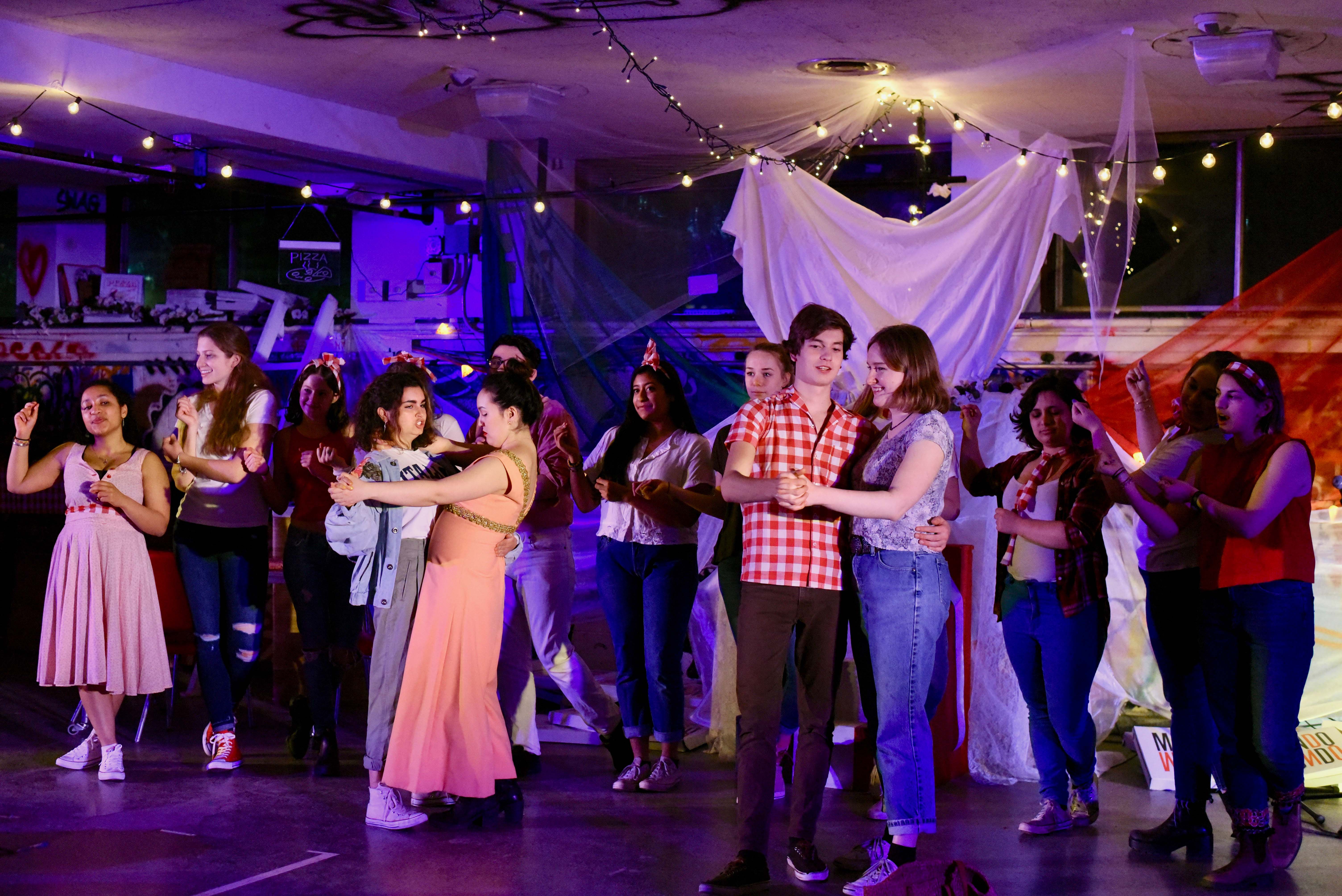 “Mamma Mia’s Pizzeria,” the brainchild of writer and director Jess Wolinsky ’17, parodies a three-hour ABBA musical by setting it in New York City’s Little Italy, centered around – you guessed it – a pizzeria. The Second Stage production features a handful of new characters, a rewritten script with a heavy dosage of pizza-oriented puns, and an altered and reorganized set of musical numbers. At its worst, it is pizza-themed chaos. At its best, it’s a powerhouse of outrageously silly, intelligently self-aware energy. And, yes, if you were wondering, real pizza is involved. (Although, unfortunately, not for audience members.)

The set design, conceptualized by art director Sofie Somoroff ’18 and Jejmor Erin Ysit ’19, is the first indication of this goofiness: Mondo boxes are strewn about in piles surrounding a set of steps to a wedding alter, painted in the colors of the Italian flag. On the right, the set for a newly opened pizzeria poignantly evokes New York thin-crust hotspots, complete with classic posters of actors like Danny DeVito and Joe Pesci. On the left, the theme continues, but it’s significantly more homey. The lighting of a neon “PIZZA” sign and pizza-shaped string lights spill onto the same red chairs and a metal table you’d find at your average New York City two-dollar-slice locale. This side serves as a competing pizzeria, owned by Donna (Molly Muoio ’17), whose daughter Sofie (Polly Pierone ’20) has just gotten engaged to a boy named Sky (Alex Carroll-Cabanes ’20).

But while the basic plotline of “Mamma Mia’s Pizzeria” mirrors that of its origins, the rest of the musical diverges significantly from this predecessor, most importantly in the outlandish tone it strikes. It’s infinitely more silly, astutely more cognizant of this silliness, and therefore considerably more willing to embrace it as much as possible, to seek out new heights of cringe-worthy pizza puns, outlandishly large ensemble dance numbers, or ironically passionate adages like “Love doesn’t have conditions, but pizza does.”

The most convincing evidence of this tendency is the presence of two original characters, Mario (Russell Goldman ’17) and Mariella (Erica Arensman ’17), who own the new pizzeria. While the pair’s most logistical function is to add more immediate pressure to Sofie’s quest to save the pizzeria, they are truly the pioneers leading the cast to yet unexplored lands of absurdity. Decked out in a gold chain, money-patterned apron, and outrageously cliché moustache, Goldman periodically performs fits of preposterously Italian-accented passion, including a certain innuendo involving some intimate sexual details described with the imagery of Italian cuisine. (I’ll mention only that Parmesan cheese and cannolis are involved, and leave the rest to your imagination.)

“It gets so over the top, which I think is something the original musical was, I guess, afraid of doing,” said Goldman. “This version has a willingness to take itself a lot less seriously. Mario exists in early melodrama in a way that the normal ‘Mamma Mia’ characters don’t really. And the fun thing about Mario is when you start here and find ways to keep going up. And I find a lot of ways to keep going up.”

He chuckled knowingly at this last assertion.

Also essential in the outrageous antics are Donna’s “Donnettes,” Tanya (Mimi Goldstein ’17) and Rosie (Sophie Elwood ’20), who serve primarily as comic relief in “Mamma Mia” as well. This duo also provides a wildly impressive vocal contribution to the cast, belting out everything from “Chiquitita” (whose lyrics, of course, become “Chiquipizza”) to “Dancing Queen.”

Not that they’re the only powerhouses in the group—far from it, in fact. When Muoio flexes her chords for the first time in the titular track, her previously understated character suddenly comes to the forefront, and not only plot-wise, as Donna simultaneously encounters three ghosts of boyfriends past, but also vocally, reminding audiences that Donna is actually one of the most prominent singers in the show; a challenge that Muoio accepts with open arms and accomplishes stunningly, on top of her many comical contributions.

While the most important aspect of the show is its rowdiness, there are certain aspects that have been carefully thought out, particularly the altercations made to the script that render it more attractive to a Wesleyan audience in 2017. One such addition is a relationship that develops between two female characters, which allows a show that’s ultimately about love and relationships to demonstrate a more inclusive definition of this theme. While writing the script, the directors even considered what a single-mother pizzeria owner in Little Italy might realistically look like—what would be her socioeconomic status, her motivations, her background?

Not to mention that Sofie, who has historically (if you can consider “Mamma Mia” historic) been a ditzy, vapid character, has finally been given a backbone. She takes on a mission to save the pizzeria, demonstrating an agency and assertiveness that isn’t present in the original iteration of her character. Her bond with her mother is also more heavily emphasized through the portrayal of the prideful love of a single mother and the reciprocal affection of the daughter she raised.

“Sofie at her core is always gonna be just kind of obnoxious,” confessed Pierone. “A little too blonde, a little too in love, a little too earnest…but we love her, and in this version, I feel like she does have goals. She knows what she wants and she’s also got a little bit of attitude. [The script] gives her some nice depth, which is fun to play with.”

Even the rambunctiousness itself is, in a sense, an interpretation of a modern-day outlook. In an age where single-parent families are so much more common, the show’s driving plotline—Sofie’s urgency to figure out who her father—seems more preposterous than it used to. The absurd antics of the show double as reflections on the fact that a girl on the verge of adulthood might not be so intent on finding her father these days.

But, as Wolinsky notes, the musical is, at its core, a dance party. And the playlist is provided by a mix of talented individuals curated by music director Ali Felman ’17, who, after contacting fellow musicians and hearing a majority of passes on the opportunity to be in the band, crowd-sourced to WesAdmits.

“I was just, like, ‘Who wants to play a shitload of ABBA this semester?’” Felman recalls. “And I got some great people from that. People that have never done theater before.”

And the band, which includes two keyboards, two guitars, bass, drum, and even saxophone, synth, and melodica, ended up taking on a life of its own, adding to the sheet music their own riffs and personal style. And Felman fearlessly leads their chef-hat adorned heads with a confident and commanding grace (as well as a chef hat of her own).

“I’ve done a lot of theater in my life but, for whatever reason, I haven’t been all that involved, so this semester I just went all in,” Felman said. “I decided I should stop having that internalized misogyny thing where I don’t think I’m qualified for anything and just go ahead and do it. Turns out I’m qualified as fuck.”

Another unique aspect of the band is that, since it’s largely crowdsourced, it deviates from the usual suspects that appear in Second Stage musicals. This openness extends to every part of the show, from a mostly-new design and costume team to the ensemble, which was assembled through a no-cut policy. Everyone who auditioned and stayed on through practices appears on the stage, adorned in red gingham bandanas and neckties that echo a pizzeria’s tablecloth, dancing their hearts out no matter what side of Usdan they sit on.

“It’s like High School Musical, but in college,” Wolinsky summarized.

The indoctrinating tendency of “Mamma Mia’s Pizzeria” is also important in the long run, serving not just the show’s need for a large ensemble (which, at 44, is the largest Second Stage cast of the season), but also the general trend at the University of the same few people appearing in the majority of productions.

“It’s because people who are triple threats [are rare],” Wolinsky explained. “People who can sing, act, and dance. But I’m in ‘A Chorus Line’ right now and there are a ton of different people who have never been in anything before, who have never gotten cast. So the flavor of who’s doing theater is changing, and I think that’s really nice, and that will even happen more once the Class of 2017 graduates, because there are twenty Theater majors in our year.”

In the meantime, though, we have ABBA and pizza. And it’s not such a bad way to bide the time.