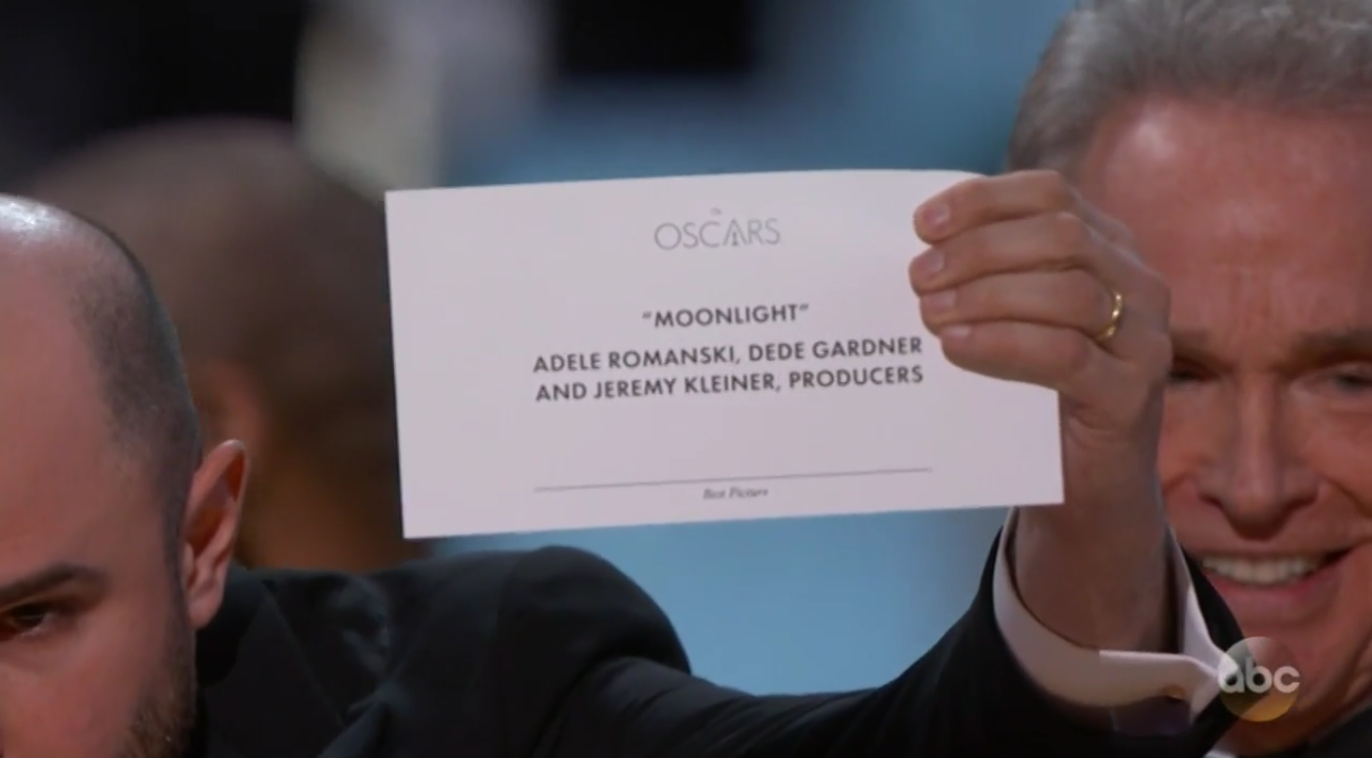 What appeared to be a normal night of awards, never-ending commercials, and a series of microaggressions by host Jimmy Kimmel turned out to be one of the greatest twist endings in U.S. pop culture history, with “Moonlight” unexpectedly winning Best Picture after a Steve Harvey-esque mixup occurred on stage.

The show was about to end when “La La Land” won best picture—until it was revealed that it didn’t. After almost the entire thank-you speech was given by the cast and crew of the musical it was revealed that “Moonlight” had won Best Picture, to the shock of the “La La Land” cohort on stage. Presenter Warren Beatty, after looking at the results contained in the envelope for almost half a minute, was cut off by co-presenter Faye Dunaway, who announced the wrong film. Dunaway had in fact read the result of Emma Stone’s victory for Best Actress on behalf of “La La Land,” not the actual results for Best Picture. Ultimately, a producer for “La La Land,” Jordan Horowitz, announced the correct results to a bewildered crowd.

Before the bungled finale, the show had shaped up to provide more than enough fodder for think pieces galore on the blogosphere, only to have overly caffeinated and potentially over-served culture writers scrap their entire drafts upon the final minutes of the ceremonies. 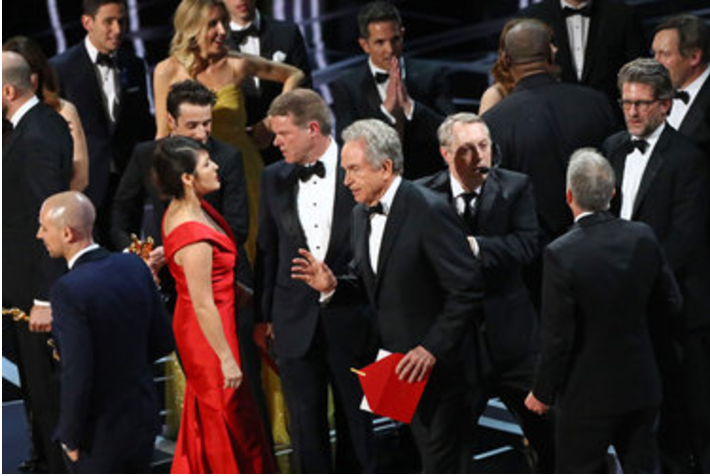 The show kicked off with Justin Timberlake performing a melange of pop songs while dancing through the concourse of the Dolby Theater, culminating with hip-hop dancing on stage with his crew. Timberlake was chipper and optimistic, unlike the percolating blogosphere, which had hot takes prepared in the hundreds of thousands to unleash upon social media domains.

Before the full wrath of discerning American pop-consumers was unleashed upon Kimmel, he delivered a mostly well received monologue that spared President Donald J. Trump more than pundits predicted. Nonetheless—and perhaps most effectively with coalescing rhetoric—Kimmel was able to take a few jabs at the POTUS.

“I want to say thank you to President Trump,” Kimmel joked. “I mean, remember last year when it seemed like The Oscars were racist?”

Kimmel then made an earnest plea to the audience, calling on viewers to call someone they love but vehemently disagree with politically in an effort to create respectful and constructive discourse. After rapturous applause from the star-studded audience, the host then turned toward a basic shtick that seemed to please most people seated in the Dolby Theater. 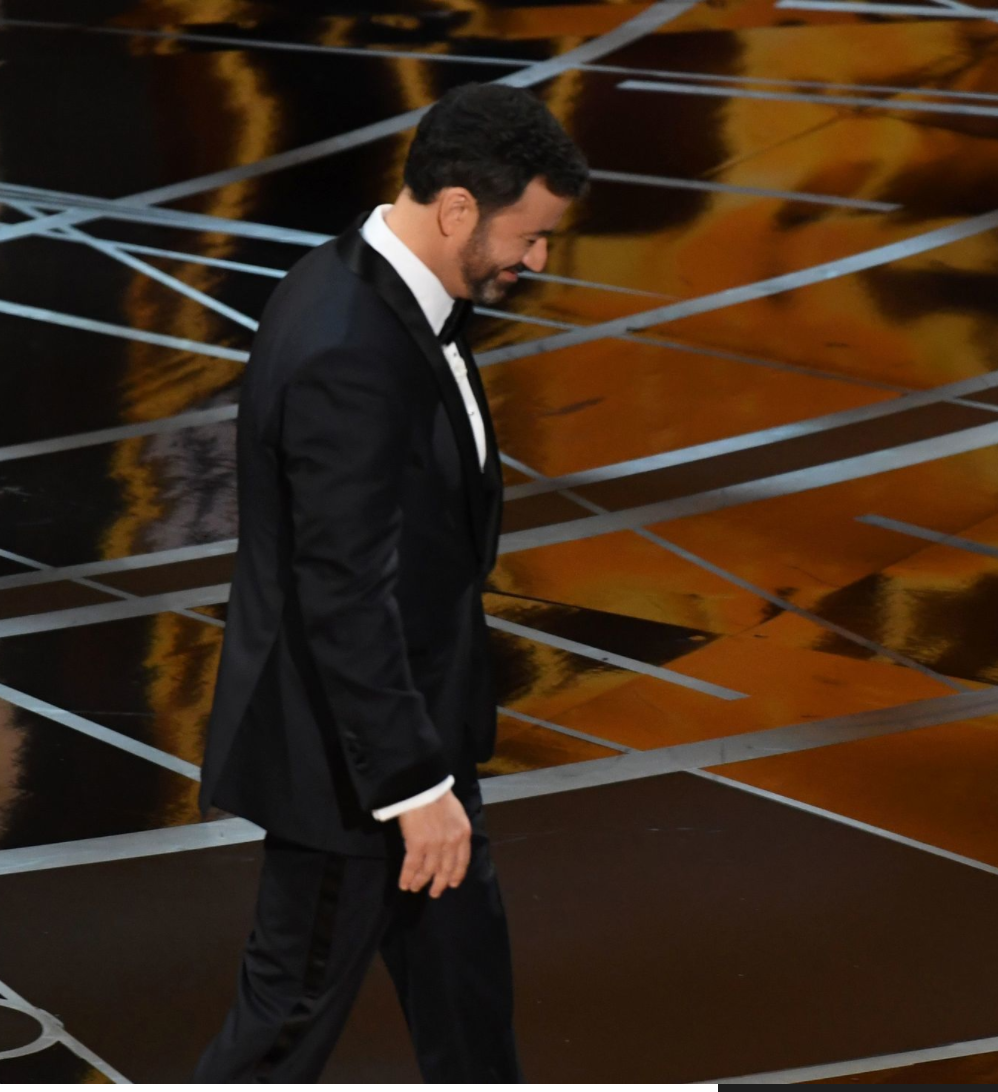 “Black people saved NASA and white people saved jazz. That’s what we call progress,” Kimmel joked before turning his attention to Meryl Streep. “Nice dress, is that an Ivanka?”

Finally, Kimmel took one final swing at the President, goading him into tweeting about the show.

“It’s important that we take a second to appreciate what is happening here,” he said. “We’re at the Oscars. The Academy Awards. Some of you will get to come up here tonight and give a speech that The President of The United States will tweet about in all caps during his 5 a.m. bowel movement tomorrow, and I think that’s pretty darn excellent if you ask me.”

The monologue ended, the lights briefly went down, and then the awards were under way.

The first victory of the show found Moonlight’s Mahershala Ali, who accepted the award for Best Actor in a Supporting Role. Ali has become a symbol for Black excellence in recent weeks, having gained critical acclaim for his brief yet powerful role in the innovative indie film after many years of steady ascension in his career. The Tisch alumnus is the first Muslim to win an Oscar. 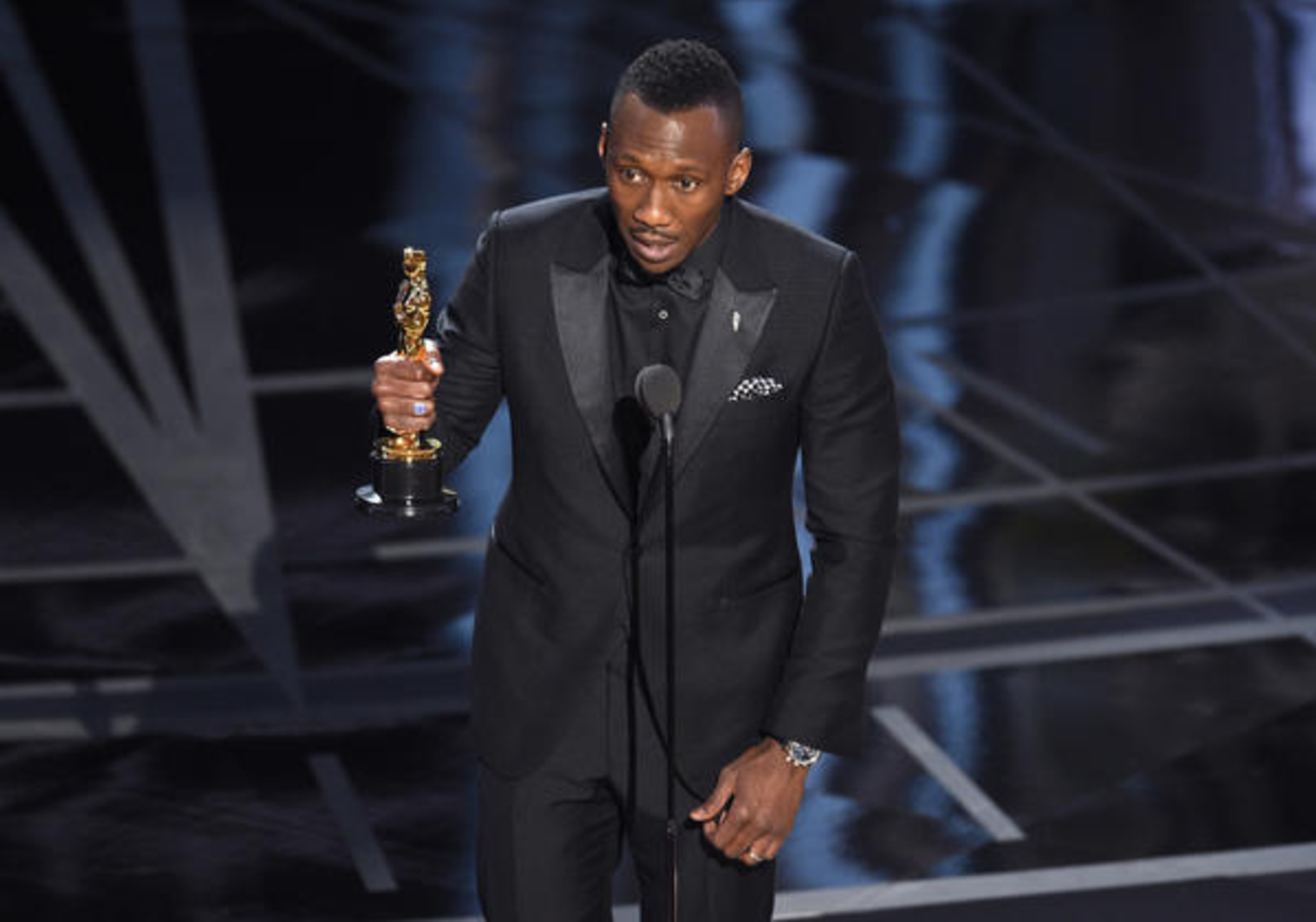 “My grandma would want me to button up,” Ali said, before thanking his teachers and professors. “One thing that they consistently told me… Ron van Lieu, Ken Washington, said it wasn’t about you. It’s not about you. It’s about these characters. You are a servant. You’re in service to these stories and these characters and I’m so blessed to have had an opportunity. It was about Juan, it was about Paula.”

After a transcendental Americana post-Trump ad from Cadillac and a victory for “O.J.: Made in America,” Viola Davis won Best Supporting Actress and gave a rousing speech, showing off her renowned oratory and exceptional gravitas.

“We are the only profession that celebrates what it means to live a life,” Davis said.

In a profile in The New Yorker by John Lahr, it was revealed that the actress grew up going to bed every night with rags tied around her neck, all in an effort to protect herself against being bitten by the rats that scurried around her room.

The political tone of the evening was then kicked up a notch when the winner of Best Foreign Film chose not to attend The Oscars out of solidarity with those banned from entering the United States by President Trump’s executive order. Asghar Farhadi, the Iranian director, had a statement read on his behalf in the theater, saying that President Trump “disrespected” his country with the order.

A much awaited 15-second New York Times ad aired just after 10 p.m., addressing the noise of the modern media landscape, and why the truth is more important now than ever.

Another shot was taken at Trump by Gael Garcia Bernal, a presenter for the animated film awards, who said that he hopes, as a Mexican immigrant and as a human being, that no wall will be built to separate people from each other. 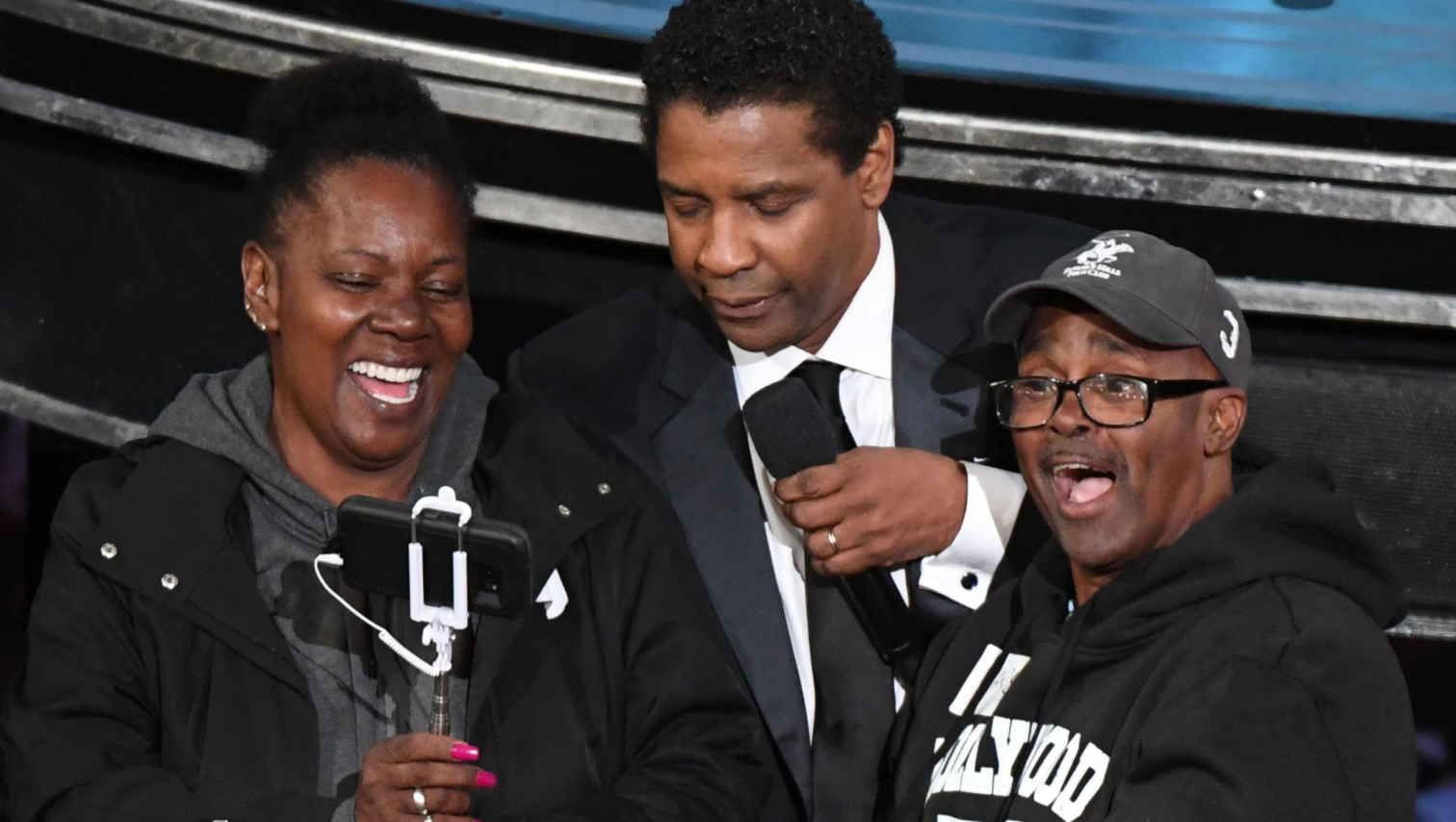 Then came a bizarre bus tour segment, in which Kimmel ostensibly duped a normal group of Hollywood tourists into entering the Dolby Theater live on national television. It was unclear whether the joke was on the celebrities or the public, with the tour-goers holding out their smart phones throughout the unstructured sketch, being introduced by Kimmel to several stars in the front row. Some found the sketch to be cruelly praying upon the innocent public, while others simply thought it was a poorly executed critique of Hollywood elitism. At one point, Kimmel joked that an Asian woman’s name was not real, citing a white man’s name introduced immediately after as being a “real name.”

Kimmel’s remarks throughout the show about first names quickly garnered criticism online—ranging from his skit about Mahershala Ali and his son to the tour bus woman—with many tweeting that the host’s jokes were emblematic of a broader trend of microaggressions among white people when engaging with non-WASP names, including notable alumni such as Himanshu Suri ’07.

“School in America was teachers constantly sayig [sic.] ‘now THAT’s a name’ to any Western name said after my own,” the rapper and burgeoning marketeer tweeted.

“All you people out there who feel like there’s no mirror for you, that your life is not reflected [in pop culture], the Academy has your back, the ACLU has your back, we have your back, and for the next four years, we will not leave you alone; we will not forget you,” Moonlight director Barry Jenkins said.

Damien Chazelle then won best director, the youngest candidate ever to do so, followed by Casey Affleck with Best Actor. Affleck’s nomination had garnered significant criticism surrounding allegations of domestic violence involving the bearded star, inciting further outrage upon his victory. 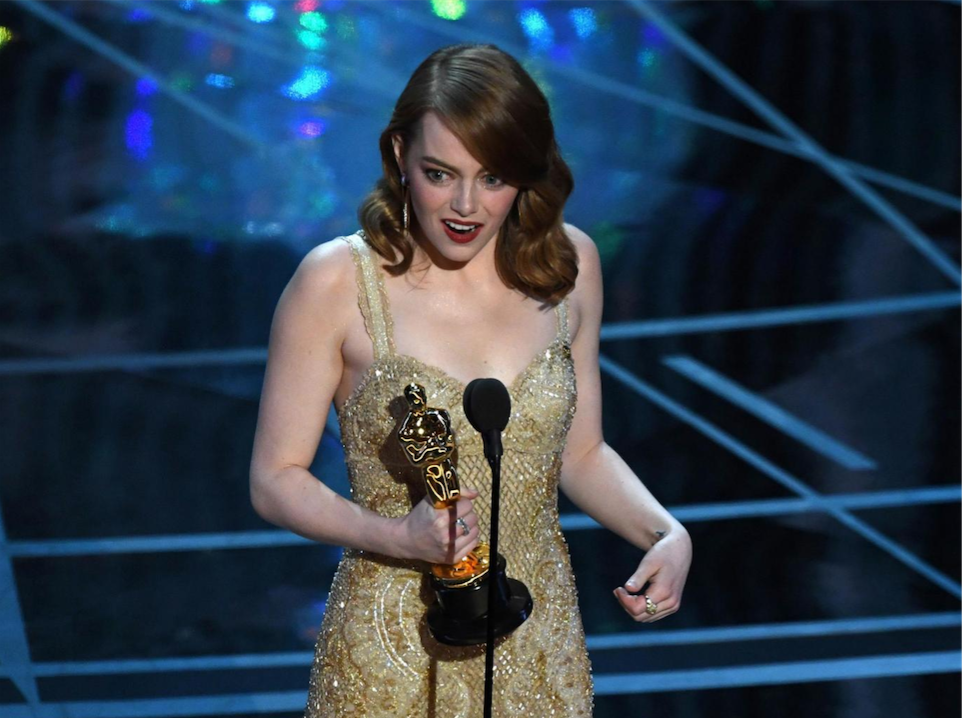 Emma Stone won Best Actress for her role in “La La Land,” bringing the former “Superbad” star who made a powerpoint presentation entitled “Project Hollywood” to convince her parents to let her pursue acting into the pantheon of icons such as Joan Crawford, Audrey Hepburn, Jodie Foster, Meryl Streep, and Marion Cotillard. Stone held back tears as she accepted the award.

“I’m gonna hug the hell out of you when the feeling returns to my body,” she said to her friends and loved ones, all while trembling as the award glistened in her hands.

The 2017 Oscars were a wide snapshot of modern American culture, and, if anything, they made the case for why viewers in the age of streaming services ought to tune in to live TV.