What’s in Store: A Trip to IKEA in the Heartland of Köttbullar 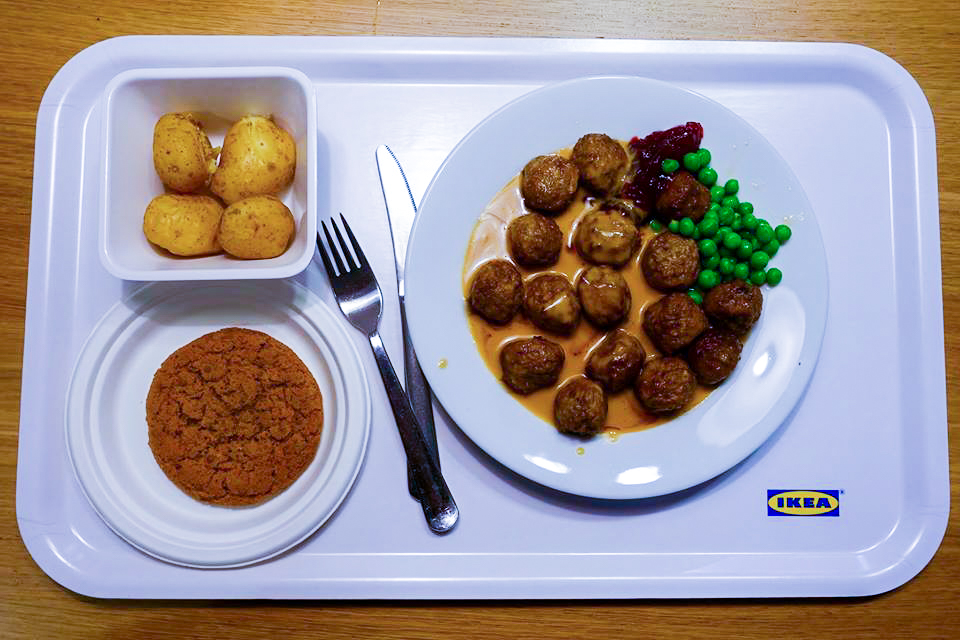 “Have you ever been to an IKEA,” a frantic Liz Lemon (Tina Fey) cautions to a boyfriend outside the behemoth of a department store in the sixth episode of the sixth season of 30 Rock. “Do you know what we’re getting into?”

From personal experiences back in the company’s U.S. warehouses watching the relationships of fellow shoppers crumble as partners bicker over shower heads in the bathroom goods section, I can attest to Fey’s fears. Seriously, nothing cuts deeper than telling a loved one you’re more of a fan of the mahogany, slide-out, three shelf-dresser right here than that unacceptable trashy white one over there.

“In an environment where choosing a coffee table is marketed as an expression of identity, it’s easy to project deeper meaning onto a partner’s opinion,” writes Corinne Purtill of The Atlantic on the psychological sources of IKEA fights. “When those expectations are dashed, egos take a hit.”

Coupled with a hunger for the infamous IKEA köttbullar (meatballs) in the company’s country of origin, I hopped aboard the glaring blue and yellow charter bus with my roommates in search of international heartbreak and an authentic home goods shopping experience.

After a free 20-minute bus ride from Stockholm, Sweden’s T-Centralen, fellow juniors Jacob Broude of Williams College and Corey Cohen of Brandeis University left the charter alongside me. On our way into the 10,000 square meter store, I noticed a speechless older couple trudging behind a cart of garden supplies, exiting both IKEA and what looked like their relationship. I was eerily brought back across the Atlantic.

Too hungry to explore the store just yet, we made our way past scores of bellowing children (some of which were all out brawling one another beside baggy-eyed parents) and decided it best to make our way to the food court. We grabbed our trays, waiting patiently and eyeing our long awaited prize: a stor (large) helping of köttbullar. Ordering plates in Swedish, each of us accidentally said no to mashed potatoes, but were too proud in our ability to get that far with our elementary knowledge of the language to change orders. We grabbed our remarkably low-priced meals, mine ended up totaling at 59 krona (approximately 6.67 USD), and barreled toward the nearest table. We dug in.

“Well, they just taste like meatballs,” an underwhelmed Broude offered after a few bites. “But we’re here for the experience, though.”

“And a cheap meal,” Cohen chimed in.

We were shockingly unimpressed with our helpings of 16 meatballs, peas, lingonberries, and four baked potatoes, all of which was doused in a bland gravy sauce. Upon noticing that the bathrooms mirrors had price tags on them after the meal, we decided to take a tour around the facility. Like a retail-version Guggenheim Museum, the main section of the industry giant’s Kungens Kurva (King’s Curve) location stands as a cylindrical tower with a series of intersecting staircases attaching several wrap-around platforms, all enclosed with glass walls. We walked from bedroom diorama display to bathroom diorama display in a dizzying circle. I found it bizarre, staring at price tags lining every item in display rooms depicting the potential homes of a Democratic Socialist country.

We wandered around that silo-shaped building for a while until we realized there was more; we’d stumbled upon the airplane hangar-sized warehouse where most of the items on sale are stored. Put away in a Citizen Kane-esque storage facility, boxes towered over shoppers who made their way to cashiers. We found ourselves overwhelmed.

“The ceilings are so tall,” I remember gawking.

“But the dreams are taller,” Cohen sarcastically sighed gazing up at it all.

In the closing minutes of that episode of 30 Rock, Fey and her boyfriend break the spell of IKEA and survive an argument over which dining room table to buy. In the end, it’s just a store, a place where meatballs and stubborn opinions on drapes happen to collide, and where we test our boundaries of what we can stand. I got what I asked for and though I’m happy I made the pilgrimage, I know I never need to go back again, unless I’m in need of home goods.

If you’re looking for a tried and true meatball recipe known to impress, based on personal experience, I suggest this sure-fire dish right here. It’s one that served 14 happy guests. Also, if you find yourself in the Stockholm area and are looking for a hole-in-the-wall restaurant version of the real deal, try out Husmans in Östermalms Saluhal (Food Hall). But if you’re so inclined, here’s a link to the official IKEA meatball recipe.

I am truly sorry IKEA meatballs, I hope I didn’t break your heart, but it’s just not working out. We simply have different interests. It’s not you. It’s me.