“Ride for Resistance” Comes to Hartford 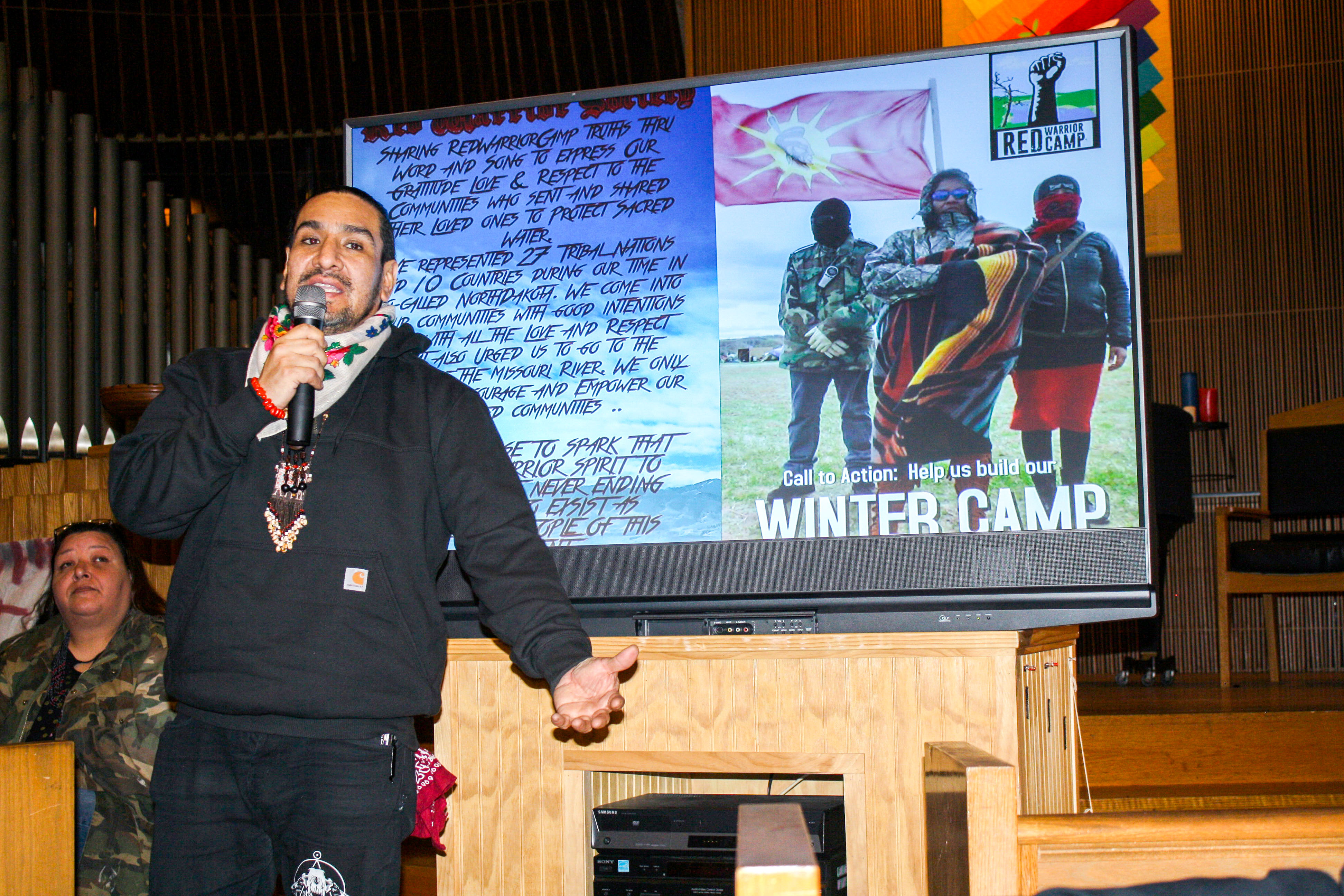 The Red Warrior Society and Mothers Against Meth Alliance (MAMA), on their ongoing “Ride for Resistance” tour of the East Coast to promote and protect indigenous rights, stopped in Hartford on Monday, Feb. 7. Hosted at the Unitarian Universalist Church, the event featured seasoned indigenous protesters who shared their experiences fighting for their rights to clean water and land. The Red Warrior Society and MAMA, working in conjunction, are heavily involved in protests against the Dakota Access Pipeline (DAPL). Over the course of the evening, the speakers gave their stories as well as called members of the audience, which included several University students, to action.

MAMA founder Julie Richards opened the night with some backstory on how she became involved with the efforts to protect indigenous rights, and the origin of MAMA. Her story is a tumultuous one, beginning in her childhood and still unfolding now.

Richards explained that she became involved with an older man and became pregnant at 15. She went on to note that despite the responsibilities of single-parenthood, she still wanted to go back to school. With the help of her mother and brothers, she graduated high school, and then went to college. There, she met another older man, with whom she had another daughter.

“I ended up getting married to him, and he turned out to be very abusive,” Richards said. “I was married to him for 17 years and the last time we met he almost killed me, so I ended up divorcing him after 17 years.

After this period in her life, Richards said she again turned to alcohol.

“I lost everything,” Richards said. “I lost my house, I lost my kids. Just everything I had. And, you know, one day I woke up and said, ‘I don’t want this life, I want a better life, I want my kids back.’ So I quit drinking; I went back to the Lakota way of life. I started attending ceremonies. I started sun dancing. I’ve been sober now for ten years; I’ve got my children back.”

Despite these many leaps forward, Richards explained that things in her life were not entirely healed.

This prompted the origin of MAMA, Richards’ meth awareness and resistance organization that has close ties to the Red Warrior Society. Meth usage, Richards notes, is a serious problem in indigenous communities, and it has been given little attention.

“The people are all scared of the meth dealers, but I’m not,” she said.“I’m not scared of them. So I started stalking them.”

Richards explained that her attempts to eradicate meth usage in her area stem from a distrust of the police and a deep desire for change. Richards does not fight solely against meth, however, and has been actively involved in Red Warrior Society for some time. Her work spans across multiple issues affecting indigenous people, from meth to water and land rights and protests against the Dakota Access Pipeline. She gives credit to her great grandmother for her will to fight.

“[My great grandmother] fought in the Battle of the Little Bighorn, right alongside her husband and her sons,” she said. “And her husband was killed, but she was a survivor. She fought so that I could be here today, you know. That’s why I fight so hard.”

The next to speak was Victor Puertas, who too has been heavily involved in protests, including many against the Dakota Access Pipeline.

Puertas described the Red Warrior Society, which is a nonviolent group of individuals dedicated to ending the construction of the Dakota Access Pipeline, which they claim will contaminate drinking water and disrupt indigenous lands. The pipeline’s construction, thought stalled, has recently been backed by the new Trump Administration.

He went on to describe the detrimental effects of the construction of the pipeline.

“A pipeline doesn’t seem like a big deal, but it really is,” he said. “A pipeline is one of the most destructive projects you can even think about. Every single pipeline leaks. In five to ten years, you’re going to have leaks that go to the water. Also, for indigenous people, if you build things like that, you’re basically assaulting our land, destroying our land. ”

He noted that protesters remain persistently peaceful, while police will use freezing water, pepper spray, tear gas and even dogs to force them to leave protests and to deter their efforts. With videos of police spraying protestors with tear gas or water playing on the screen next to him, Puertas told the audience of his experiences protesting.

The University’s Fossil Fuel Divest group, which is dedicated to protesting University investment in fossil fuels and thereby protecting people and the environment, provided vans for students to attend the event. Mina Klein ’17, an active member of the Fossil Fuel Divest, is among those who were in attendance.

“Even though DAPL is still in the news, it is certainly not receiving the same level of public scrutiny and media attention as it was right before construction was paused and before the inauguration,” Klein wrote in an email to The Argus. “There are so many things that deserve and require energy and attention right now, but that doesn’t mean that Standing Rock and pipelines and the oppression of indigenous sovereignty will go away. So that’s why I think it is important to attend NoDAPL events broadly speaking.”

Despite the many obstacles protesters face, Puertas noted that he is thoroughly impressed with the level of bravery and dedication he has seen.