A Peek Into Tschudin’s Chocolates and Confections 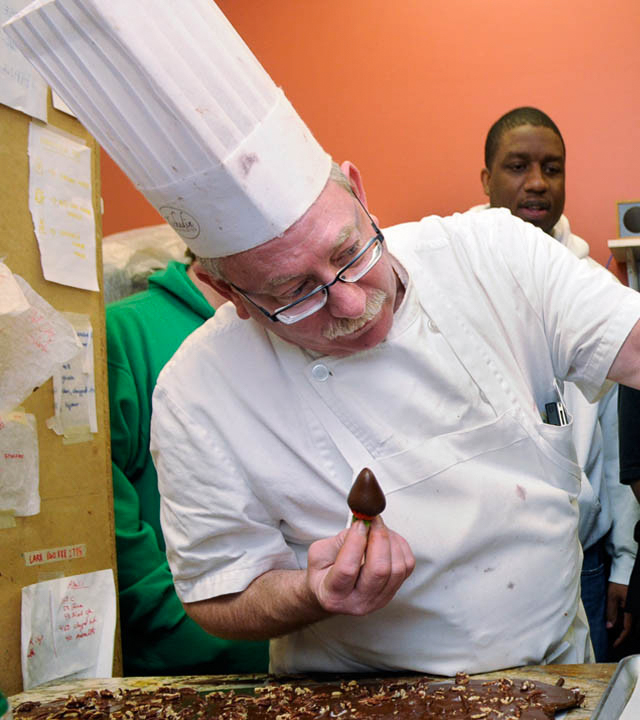 Lucheme was already chatting with a couple when I walked into Tschudin Chocolates and Confections on the corner of Main St. and Court St. Waving me over, Lucheme welcomed us three into the back of the shop, showing us the different machineries and intricacies that fill Tschudin’s. Some chocolate was painted, some airbrushed, some stuffed, some crafted into sculptures. Each time we saw a new concoction, Lucheme described the chemical reactions of the food.

“I don’t think I’ll ever leave,” Brittany Pieta, a staff worker, said as Lucheme talked about the viscosity of dark chocolate.

Lucheme hasn’t always been a chocolate wizard. He’s been a circus tightrope walker, a journalist, a practicing lawyer, and even a firefighter in Glastonbury. But as he got older, Lucheme couldn’t keep up with some of the more dangerous and physically exhaustive missions; he knew couldn’t continue as a firefighter or someone would get hurt.

In the midst of his search, Lucheme stumbled upon a restaurant called Cavatio’s, where he found himself making pastries and learning about molecular gastronomy. Eventually, he took on a job as an unpaid, untrained pastry chef and found a connection to making sweets.

“As a lawyer, you don’t see a lot of smiles,” he said. “You see people who are anxious and not necessarily happy to see you, and very unhappy at the prospect of having to pay you,” he quipped as he took a drag from his cigarette. “But with chocolate, you see a lot of happy people, and a lot of happy faces.”

But as he dove further into the culinary world, Lucheme felt inexperienced and knew he needed some more practice and education.

“My nickname used to be, ‘What Happened Was,’ because I had no training, so I was screwing up constantly,” Lucheme said. “The only reason they didn’t fire me was because I’d come back on my own time to fix whatever I had screwed up.”

Lucheme received an offer from the Culinary Institute of America to hone his skills as a chocolatier. He then found a little chocolate shop in Middletown, but had no idea the owner wanted to unload the shop on him.

“Three weeks after I was here [Tschudin’s], everything was going fine,” Lucheme said. “But then she started talking to me about buying the shop, and I was thinking it’s 2009—the year of the not-so-great depression—and I’ve never run a shop or retail, restaurants typically fail in the first three to five years, so what chances do I have? But the price kept dropping and the landlord jumped in and said, ‘I’ll cut the rent and give you one year out.’ So I said, ‘Alright’, and took the plunge.”

Since then, Tschudin’s has been a staple of Middletown. People come far and wide to experience their famous “Night in Tunisia,” truffles, which are infused with red chili, fenugreek, coriander, and ajwain, or their “First and Last,” truffles, made from white chocolate and stuffed with balsamic vinegar and lemon thyme, topped with sun-dried tomatoes. Lucheme knows he doesn’t run a traditional shop, but that’s what makes Tschudin’s what it is.

“You can’t please everyone all the time,” Lucheme said. “Sometimes we’ll get a bad review from somebody, typically it’s because my shop is cluttered, it’s eclectic. I have an organ in there. I have the slot machine, and all those kinds of things. Some people get upset because it doesn’t have that perfect corporate look. But, by and large, over time we’ve done pretty well for ourselves.”

Then Pieta came outside to remind him to start preparing ice cream sandwiches for a competition. Lucheme turned towards me and left his parting words.

“For a guy that flunked finger painting in Kindergarten, I’m not doing too badly.”

The article’s headline has been corrected to rectify a grammatical error.