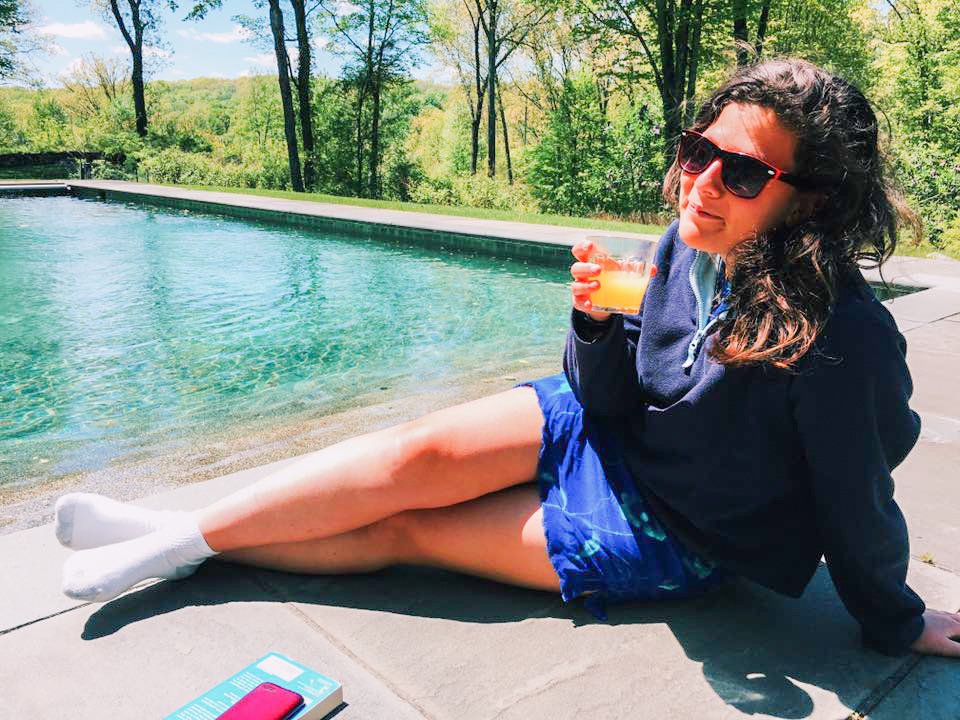 With her signature friendly smile, Mira Klein ’17 is a familiar figure at the University. Whether participating in sustainability initiatives, competing with the ultimate frisbee team, working with the Wesleyan Jewish Community, or being a Geographical Information Systems (GIS) assistant in the Quantitative Analysis Center (QAC), Mira involves herself in so many things that you are bound to run into her at countless campus spots. The Argus sat down with her outside Pi Café to talk about her “Compost Queen” earrings, her intense love of sports, and her time at the University.

Mira Klein: Maybe a part of it is why people in my elementary school liked me, when I was really shy and quiet. I think it came down to me not pissing people off. When people tell me that I know a lot of people, part of that is freshman year: I had a roommate who was super outgoing and really wonderful, and basically made all my friends for me. I didn’t have to use that energy to go out and make friends. There were always people in my room. They’d be like, “Oh, we’re friends with Tess, but we can be friends with you, too.” And that helped me make friends. I also play on the ultimate frisbee team, which has a crap ton of people. I definitely was one of those people who joined a lot of activities, so it may be a combination of trying a lot of activities and trying not to be an asshole.

A: So what were these activities?

MK: I’ve played [ultimate] frisbee since my first semester at Wesleyan, and there are a lot of people who cycle through. It’s a super big team with a lot of people coming in and out, so I’ve met a lot of people that way. I also have been involved with Fossil Fuel Divest since my first year, and I was also involved in the Sustainability Office. I think maybe it’s not that I do a lot more activities than some Wesleyan students, but I think that people forget that I’m on a sports team because it’s a different sort of activity than it is to work in the QAC, or to work in the Sustainability Office, or to go to Shabbat dinner at the Bayit.

A: But you are involved in all those things?

MK: Yeah, but they’re all different. They’re not always with overlapping friend groups. I think maybe another part is that, you know how people have different definitions of who they consider to be a friend? I tend to overly say hi to people, even if they don’t know me super well. Sometimes it’s awkward. So then it just appears to more people than I do, and I’ll be like, “I promise I don’t know them that well, we talked maybe once a month ago,” or something like that.

A: What are your interests academically?

MK: I am a Government and Environmental Studies double major. I’m technically still doing the Theory certificate but I’m not going to finish it. I’m majoring in both of those things, and my academic interests are still within both of those areas, but not necessarily aligned with those departments. I haven’t taken a Gov class since last year. I’ve had a lot of what a lot of people go through when they have major regrets. I was like, “I should’ve been an AMST major, an Anthropology major, a Religion major, or all those different things.”

A: So if you could change your major, what would you be?

MK: Well, one of my housemates is a Sociology major, and they go bowling. So I’m kind of jealous of that.

A: What are your future aspirations?

MK: I’m trying to figure out a way that I can use the privilege of the education I’ve gotten here, and the skills that I’ve gotten here, to do something tangible. Something that’s not centered around my voice or [specifically] me. I feel like my energy can go toward [doing something that can] center around other people. I’m trying to find the best way to do that. It’s kind of drawing me toward maybe journalism, a little bit, because that’s something that can be done through writing. It’s writing that centers around what other people need to hear. But I have no writing experience.

A: So you want to use the platform you have to provide a voice to others?

MK: Yeah. I’ve been talking to a couple people at this local politics magazine in Seattle, which is where I’m from, and I’m trying to be like, “How do I get started with this although I’ve never worked for a newspaper before?” I’ve taken only one journalism class here.

A: I know you’re currently a GIS assistant in the QAC department. What’s an interesting GIS project you’ve worked on, and why GIS?

MK: In terms of actual skills that I can apply, GIS is a skill that not many people might have exposure to, but hopefully I can use it in interesting and innovative ways. There’s this cool organization in the Bay Area called the Anti-Eviction Mapping Project that uses GIS in combination with oral histories and other platforms to talk about the ways that gentrification and displacement are happening in the Bay Area. They make these beautiful maps. I think those sort of projects, though I might not have the technical skills to do those things yet, are the kinds of things I aspire to do with GIS. I’m trying to use it in my thesis and employ GIS not in a way that is too reliant on the technology but in a way that can illuminate what I’m talking about in my thesis.

A: What’s your thesis topic?

MK: I am writing a thesis in the Government department. I’ve been telling people it’s about urban parks in New York City, municipal policies, and gentrification. It looks at the ways small neighborhood parks and urban greenspaces have been modified and how they may have facilitated displacement in concert with different municipal policies, whether they are through zoning or housing policies and how those things are working together. I’m hoping to use GIS to look at it in that way.

A: What are some sustainability initiatives that you’ve been involved with?

MK: I was involved in the Sustainability Office in my sophomore and junior year. First as an Eco-Facilitator and later helping coordinate the Eco-Facilitator program with Rachael [Metz ’16]. Something that we cared about last year was finding ways for people who come to Wesleyan [to] get on the same page about things like composting. I did composting in high school, and that was my thing. I was that awkward girl who stood in the lunch room at the end of lunch and told people where to put their stuff. Two separate friends on separate occasions both got me bright-pink earrings that say “Compost” on one side and “Queen” on the other, and they’re really silly. But I recently brought a pair back to school because I want to start rocking them again. Because of that I had a lot of experience with composting in high school.

A: What else did you do as a part of the Eco-Facilitator program?

MK: Another increasing goal of the program is to bring the sorts of conversations that are being had in the traditional sustainability community into things that are more geared toward environmental justice, especially in conjunction with the environmental justice forum that was held last semester. I wasn’t involved in that specifically, but the program is growing in that direction. That was something I cared a lot about working with Jen [Kleindienst] in the Sustainability Office.

A: Along the lines of your Compost Queen earrings, what’s something else interesting about you that not many people know?

MK: Some people might know this, because I talk about it a lot, but I really love sports, with such an intense passion.

A: Playing or watching?

MK: Both, but I think watching is the thing that most people are surprised about because I’m not that good at playing sports but I love watching sports. I love basketball, and it was my dream for so long to be in the WNBA. I’m still heartbroken that I’m not. I went to this UConn women’s basketball game over the weekend, and they’re the number one-ranked women’s team in the country. They’re so good, and I was just watching them like that could’ve been me, though let’s be real, that could not have been.

A: Did you play basketball in high school?

MK: I don’t know if you could call it playing, but I played for two years on the Seattle City League Bronze Rec Team. You know bronze level, like the lowest level rec team. Our team name was the Nazguls, you know like in the “Lord of the Rings,” those hooded people on horseback. We were not good, but I had a ton of fun. We would usually watch “The Bachelor” and then go to practice.

A: Do you still watch “The Bachelor?”

MK: I haven’t watched “The Bachelor” since high school, but I think I should start watching it again. I was reading a lot of People Magazine over the break, and “The Bachelor” was like a hot topic. So, I was getting reinvested.