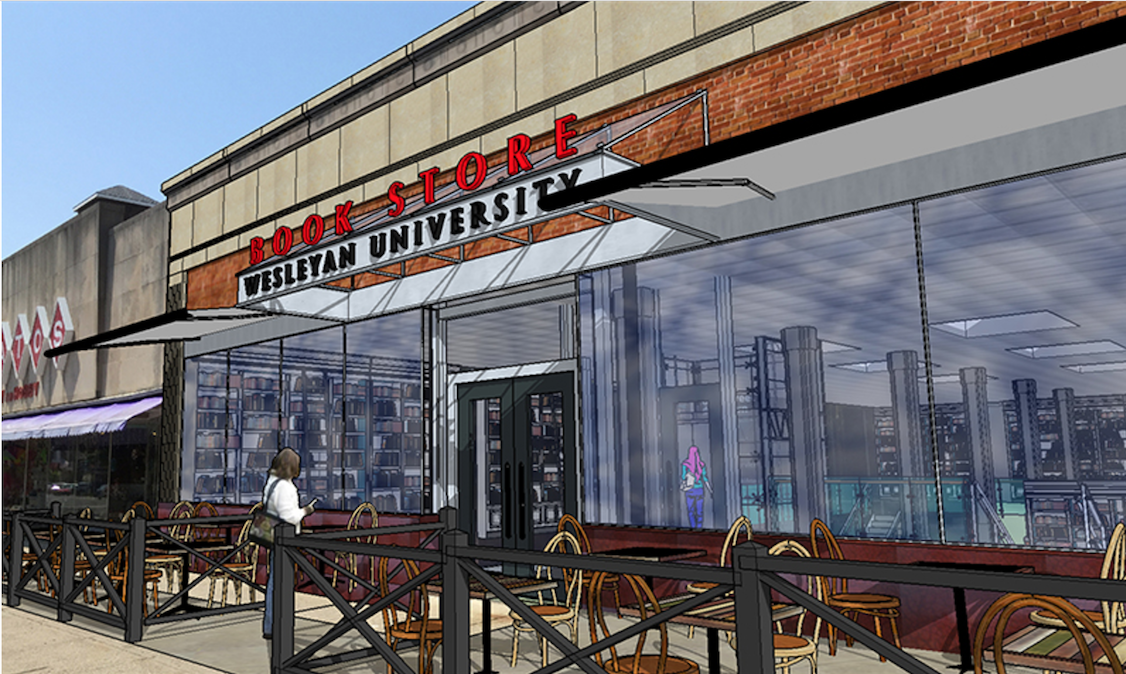 In preparation for the most financially significant unification of the University and the City of Middletown, President Michael Roth ’78, along with over a dozen Middletown dignitaries, announced the opening of a new campus bookstore, which will be run by R.J. Julia of Madison, Conn., on Main St. in a ribbon cutting ceremony on Wednesday, Nov. 30. The next day, rank and file employees of the current campus bookstore, Broad Street Books, were in disarray after being blindsided by the announcement.

While employees were aware of a change in locations for the bookstore, most did not know that their parent company, Follett, had lost the bid for the Main St. location until they found out about it through the evening news, Shawn Beals’ story for The Hartford Courant, or the University Communications newsletter.

“We don’t know if we’re keeping our jobs,” said a Broad Street Books employee who wished to speak under the condition of anonymity so that they could speak candidly. Several employees also cited a corporate policy that prevented them from speaking with the press.

The University has made efforts in the past to let employees of companies whose contracts have ended continue working on campus with the next vendor, such as back in 2007 when many current Bon Appétit employees stayed over from Aramark, the previous campus dining vendor. However, these workers were all part of a union, Local 217, which was most recently covered in an Argus feature on Bon Appétit’s impending contract negotiations. At the ribbon cutting ceremony, R.J. Julia CEO and founder Roxanne Coady said that she is interested in employing Wesleyan students at the bookstore, and that the bookstore would look to hire 15 to 18 people upon opening in the spring of 2017.

“Tell them to send us their applications!” Cody said at the ribbon cutting ceremony, referring to potential student employees.

While several Broad Street Books employees expressed discontent and shock over the news that their parent company, Follett, had lost the bid to run the new bookstore, none of them were willing to speak on the record about the decision, citing a corporate policy. Several senior management level employees were absent the day after the ribbon cutting ceremony.

Regional manager Bert Ramgren, who runs Broad Street Books for the Follett Corporation, did not comment after repeated requests from The Argus before the publication of this article. Follett Corporation communications officials also did not comment after repeated calls to the company’s headquarters in Westchester, IL. Spokesman Thomas Kline, who was unfamiliar with the Broad Street Books situation from his position in corporate headquarters, only suggested consultation with University administration.

Director of University Communications Bill Holder told The Argus that Follett had been notified about the decision to go with R.J. Julia, though he did not know who specifically was contacted at Follett.

R.J. Julia’s winning of the University’s bid for a new bookstore vendor is just one in a series of achievements for the Madison-based company, which has another location in the Hamptons on Long Island in addition to its original store and its soon-to-be third location in Middletown.

“R.J. Julia hosts more than 300 events each year in Madison and has won several major awards,” a University press release given at the ribbon cutting ceremony read. “Among those are Publishers Weekly Bookseller of the Year, Lucile Pannell award for bookselling excellence, and Connecticut Magazine Best Bookstore.”

Coady was impressed with the coordination required to pull off the project.

“It is both rare and exciting to see a community come together the way Wesleyan, the City of Middletown, and the Middlesex Chamber of Commerce have,” Coady said. “Together we can create the kind of bookstore that will be the new standard for a college bookstore that is an integral, active member of its town.”

Set to be completed before the end of the 2017 spring semester and ready for the 2017-18 academic year, the bookstore will boast an innovative yet historically preserved aesthetic in the 1930s art deco building that used to belong to Itkins Decorators. Northeast Collaborative Architects, the firm contracted by the school to design the new bookstore, created a two-level plan for the building that doubles its square footage from 6,000 square feet to 12,000 square feet. 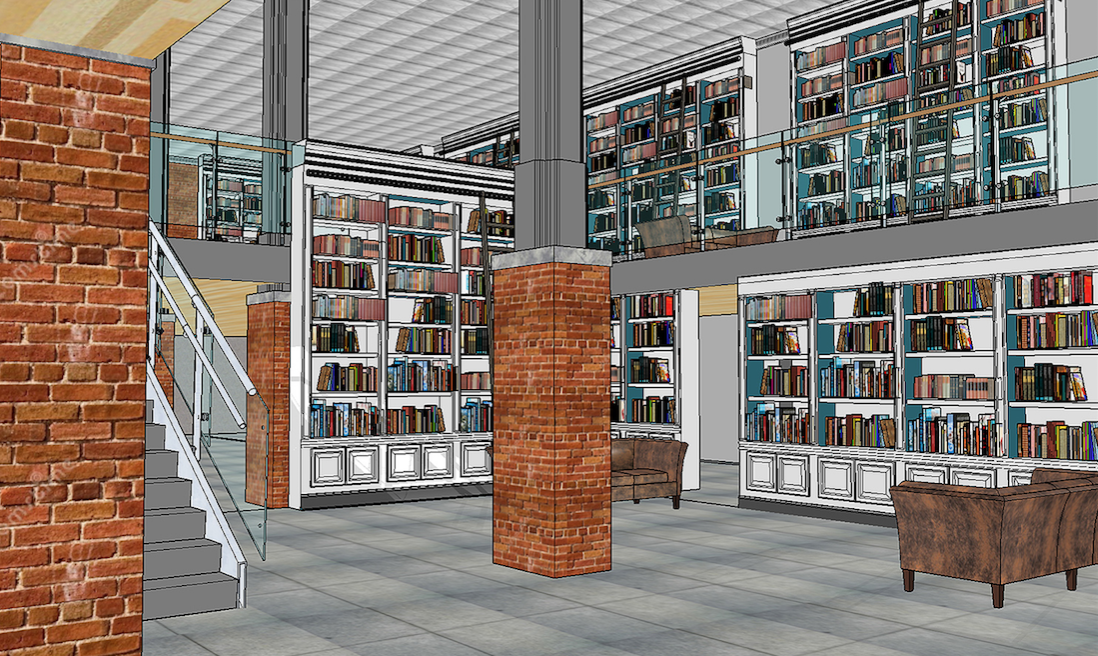 Jeffrey Bianco, one of the firm’s partners, said he was particularly inspired by Finnish architect Alvar Aalto, whose aesthetic was particularly concerned with the Gesamtkunstwerk, or Total Work of Art, whereby the design, not just the building, but the interior surfaces and furniture are all coordinated toward the same goal.

“Alvar Aalto did a beautiful bookstore in Helsinki that I looked to,” Bianco said. “I’m an historical architect. The rule is, it’s who you steal from that counts. Everything’s already been done, and this is a high quality to steal from.”

Featuring an open basement level and a ground floor with bookshelves winding around the parameter on the first floor, the architectural plan is held together by sleek glass panels and preserved metal columns. This look is similar to the newly renovated Boger Hall, which houses the Gordon Career Center, the Art History Department, and the College of Letters. The bookstore basement space will have room for over 100 spectators during book talks, plus onlookers from the next floor up. Coady plans to put on around four events per week at the bookstore, which should make it the go-to venue for visiting authors rather than traditional venues like Russell House and the Daniel Family Commons.

At a time when most universities are scaling back their bookstores and retracting them toward campus, Wesleyan is moving ahead to establish an even larger bookstore on the busiest section of Main St. between Washington and Court streets. The added unity between the campus and the city has all parties involved hoping for the best, especially under a Roth administration that has made a greater effort to engage with Middletown than previous administrations.

“President Roth’s engagement with the Middletown community has been outstanding,” said Larry McHugh, president of the Middlesex Chamber of Commerce. “Wesleyan makes Middletown a better community just because of their presence here, and their diversity and everything else that they add to us. As you can tell, I’m excited.”

“We’re committed to strengthening the ties between campus and Main Street,” Roth said. “Relocating Wesleyan’s bookstore is a major step in the direction, and I am so delighted that R.J. Julia Booksellers, with their phenomenal reputation, will be our partner in this effort.”

The hype behind the project has been building rapidly once the markups were released, especially among Middletown dignitaries who have been wanting more retail on Main St. for years.

“The new Wesleyan bookstore will be a transformative development for downtown Middletown and for the city as a whole,” said Middletown Mayor Dan Drew.

“We’re going to have the best college bookstore in the country,” McHugh said, pumping his fist adorned with a gold and garnet ring in his support for the venture.