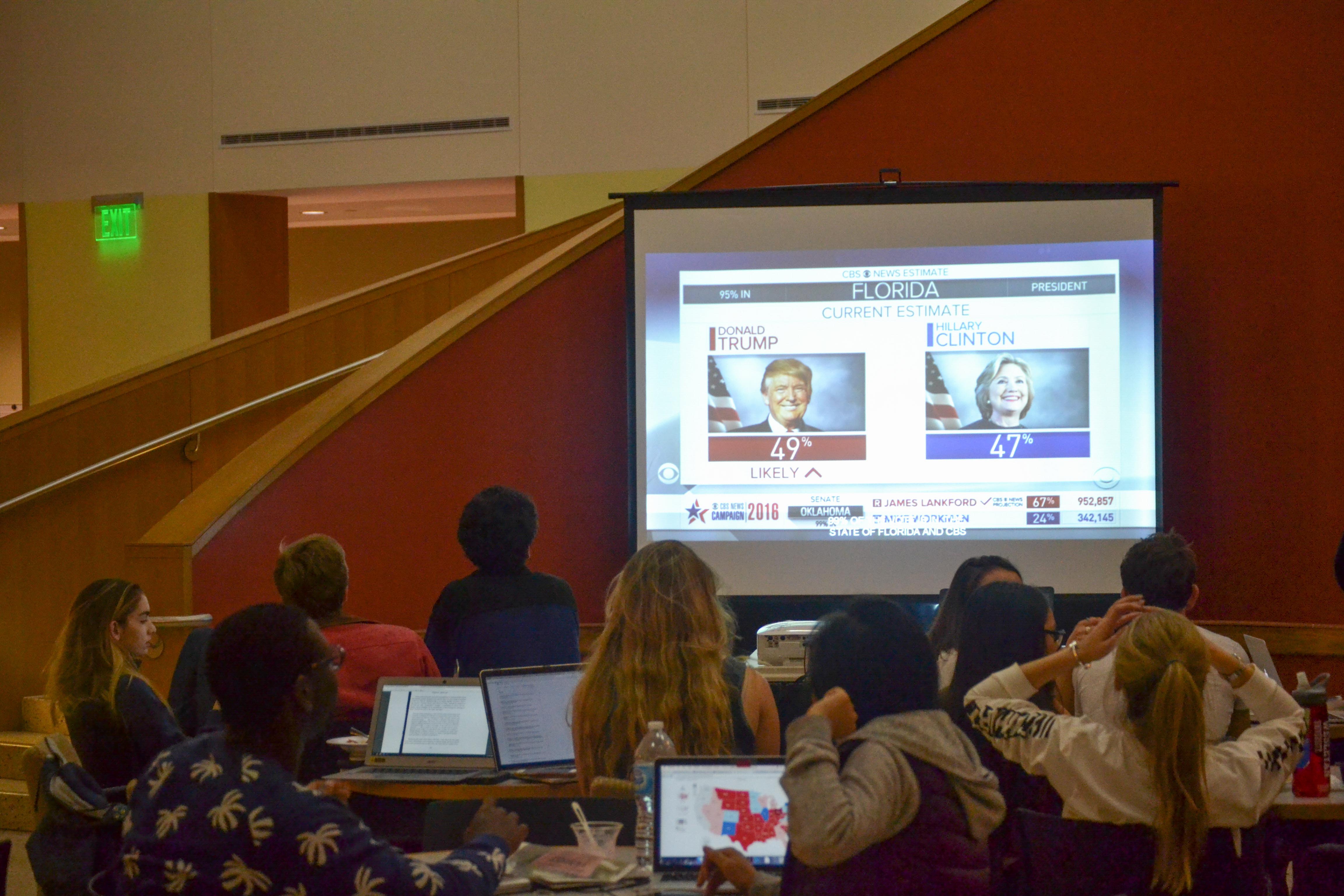 On a damp and dour Wednesday morning, Wesleyan students awoke in shock after Donald J. Trump pulled off an upset victory against Hillary Clinton to secure the U.S. presidency. At an overwhelmingly leftist university, and in a town that voted for Hillary Clinton by a 61.1 percent to 33.6 percent margin, few saw this result coming.

“I really thought that this would have been a landslide win for Hillary Clinton,” Ray Achan ’19 said. “As I was watching the election results come in, I reassured myself that she had enough of a chance to still win. Then she lost Pennsylvania and I knew it was over.”

Like many students on campus, the election had a profoundly emotional effect on Achan.

“I’ve spent time thinking, crying, and reading,” he said. “I am not confident for the future and I don’t feel safe. Our country is divided and we must heal all the pain this country still holds. We must hold our elected officials accountable and make sure this never happens again.”

Others on campus feared for their safety, especially those whose identities have been openly targeted by Trump and his most vehement supporters.

“I’m honestly afraid,” Melisa Olgun ’20 said, whose parents immigrated to the United States from Turkey. “I’m not mad that Donald Trump himself got elected. I’m mad that his rhetoric got elected. It’s terrifying that that hate can be normalized now. The only thing that he’s been spewing is hate and racism and everything in the book that has been deemed ‘wrong’ for someone like the president to have, and the fact that he won based on that is terrifying.”

Meanwhile, Sahil Singhvi ’18 posted before-and-after photos on Facebook entitled “survival tactics,” in which he had shaved his full beard as a reaction to the reality of Trump’s win.

For Carolyn Dundes ’17, who attended an election viewing party at Wellesley College, Clinton’s alma mater, election night was a trying one.

“I think my evening there was one of the most profound emotional shifts I have been present for,” they said. “My sister and I decided to leave once things really started to not look so good for Hillary because we wanted to have a little more control over our environment and to be able to take better care of one another. I had to hold it together to be able to drive back to Wes, but once I got here, the numbness went away and everything started to hurt. It’s going to hurt for a long time.”

Trump’s victory terrifies Dundes on a personal, as well as a professional, level. Dundes hopes to go into stem cell research and currently works in the lab of Laura Grabel, Lauren B. Dachs Professor of Science and Society.

“I hope to have a career as a queer person in science, which is already hard, but if Pence’s beliefs about fetal personhood carry through into embryonic stem cell research then there could be some serious changes to my graduate education over the next four years,” they said.

For a few students on campus, however, this was a time to rejoice. Though the Wesleyan Republican Committee neither endorsed nor condemned Trump during the primaries and general election, there have been a few Trump supporters on campus, some more vocal than others.

“Winning this election feels like heroin to me,” Sophia Fox ’18 said, who has supported Trump throughout his candidacy.

Other Trump supporters shared more nuanced views on why their candidate won, though many were unwilling to go on the record for fear of backlash from the campus community. Mathias Valenta ’20, an Austrian citizen who began to become more conservative during his time at Phillips Exeter Academy in New Hampshire, put Trump’s ascendance to the presidency in broader context.

“I think it was inevitable,” Valenta said. “I think Donald Trump was the candidate of the working class. This was a referendum on globalism and financial capitalism, and the nation-state won. I think this is just the beginning of a political revolution worldwide.”

Most recently, Bryan Stascavage ’18 claimed that his experience at Wesleyan is what led him to support Trump’s candidacy. In a New York Times op-ed entitled “My Liberal University Cemented My Vote for Trump,” the Iraq war veteran argues that the critical thinking taught in a variety of departments, including the recently bolstered Department of African-American Studies, directly informed his decision to vote for the real-estate mogul.

“It was the history, African-American studies, philosophy and classics departments that showed me that change rarely succeeds with a smile,” Stascavage writes. “Rather, it requires an aggressive and unapologetic effort to show those in power that they no longer represent the will of the people. The Republican Party found that out in the primaries, and the Democrats found that out early Wednesday morning.”

At 5 p.m. in the Daniel Family Commons, a tissue box was passed around in a Quaker-style discussion organized by the WSA and Student Affairs office, where about 60 students and administrators were in attendance. Rabbi David Leipziger Teva led the gathering alongside Dean Mike Whaley, Imam Sami Aziz, and several other administrators such as Dean Antonio Farias and Dean Renée Johnson Thornton.

“I almost feel complicit in the outcome,” Johnson Thornton said, wondering if she could have done more to elect Secretary Clinton.

Aziz considered not coming to the gathering at all, but changed his mind after hearing from a student he provides guidance to emailed him saying that they were afraid for their safety and planned on not leaving their room all day. Aziz works extensively off campus to educate non-Muslims on what Islam is and how it’s obfuscated and misinterpreted by figures like Donald Trump.

“If we don’t continue to converse and dialogue with people, we can’t create love nor progress,” Aziz said after a long silence.

“Despite such a polarizing, mean-spirited and divisive campaign and even with Wolf Blitzer’s countless ‘we have an update from Florida,’ I had no idea what Nov. 9 had in store for our country,” Teva wrote in an email to students earlier in the day.

Teva also spoke to the urges among many in the campus community to act upon their rage.

“There is an impulsive, reptilian part of me that wants to reach for a megaphone and chastise my fellow Americans who voted for Trump for lacking critical understanding, empathy or basic common sense,” he wrote. “That course of action would be not only simplistic and reductionist but also false. Acting impulsively is never a constructive path to follow.”

In a discussion that included prolonged periods of silent reflection, students, especially those from minority groups, began to share their despair at what a Trump presidency could mean for them and their families.

One student who wished to remain anonymous spoke to the difficulties of being easily identifiable as a Muslim now that Trump has been elected.

“I wondered if I should take off my hijab,” she said. “Sometimes, when I’m crossing the street, I wonder if the person behind the wheel won’t stop because they see that I wear a headscarf, and they have a certain opinion about Muslims.”

Later that night, at 11 p.m, around 50 Wesleyan students gathered for a group scream on Foss Hill. The cathartic event began with around 30 seconds of wordless, primal yelling, and more and more voices joined the cacophony as students flocked to Foss.

The screaming soon morphed into three-word chants, including “Fuck Donald Trump,” “Love Trumps Hate,” “Black Lives Matter,” and “Not My President,” interspersed with bouts of howling and screaming.  The group then began a disorganized procession from Foss Hill to the front of Olin Library, looping through the library and back out again, all the while chanting “Fuck Donald Trump.” Students disbanded shortly thereafter.

Malcolm X House also hosted a student-run students of color safe space yesterday from noon to midnight. Students came and went as they pleased, and in the event room of X House students grieved in any way they wished.

The Asian-American House also hosted a safe space on Thursday night from 6 p.m. to 8 p.m. The space was open to everyone, including international students who did not have the right to vote.

In a blog post in August titled “Stop the Trump Calamity,” President Michael Roth denounced the president-elect, making him one of the few Wesleyan Presidents in the country to publicly comment on the election.

“I think we’re facing one of the most consequential elections in American history,” Roth told The Argus in October. “I think there are three or four [college] presidents in the country who have actually broken with the tradition—if not the law—and said so publicly. You’re talking to one of them.”

However, when asked about whether he would cancel classes in response to a petition circulated by students, President Roth said he would not.

“The University, as far as I know, has not canceled classes to mark protests, and we will not do so,” Roth said. “I have great sympathy for those disappointed by the result of the elections, and I do think we have much work to do to protect the people and values we care about. I should say that I know Trump supporters who think I am exaggerating the dangers of the president-elect. I hope they are right. So, Wesleyan won’t be canceling Friday classes, but I do hope that people of all political persuasions going forward learn how to participate in the electoral process in an effective and timely way. It really matters.”

While it’s likely that this week will be permanently seared into students’ minds, the debate surrounding the president-elect is far from over. Protests on campus and in New York City are scheduled for this weekend. Some students have signed a petition calling for unbound electors in the Electoral College to vote their conscience against Trump when the results of the election are officially finalized on Dec. 19. Between now and the inauguration, campus activists expect that organized resistance will continue as students cope with fear and grief in the aftermath of Trump’s unprecedented victory.