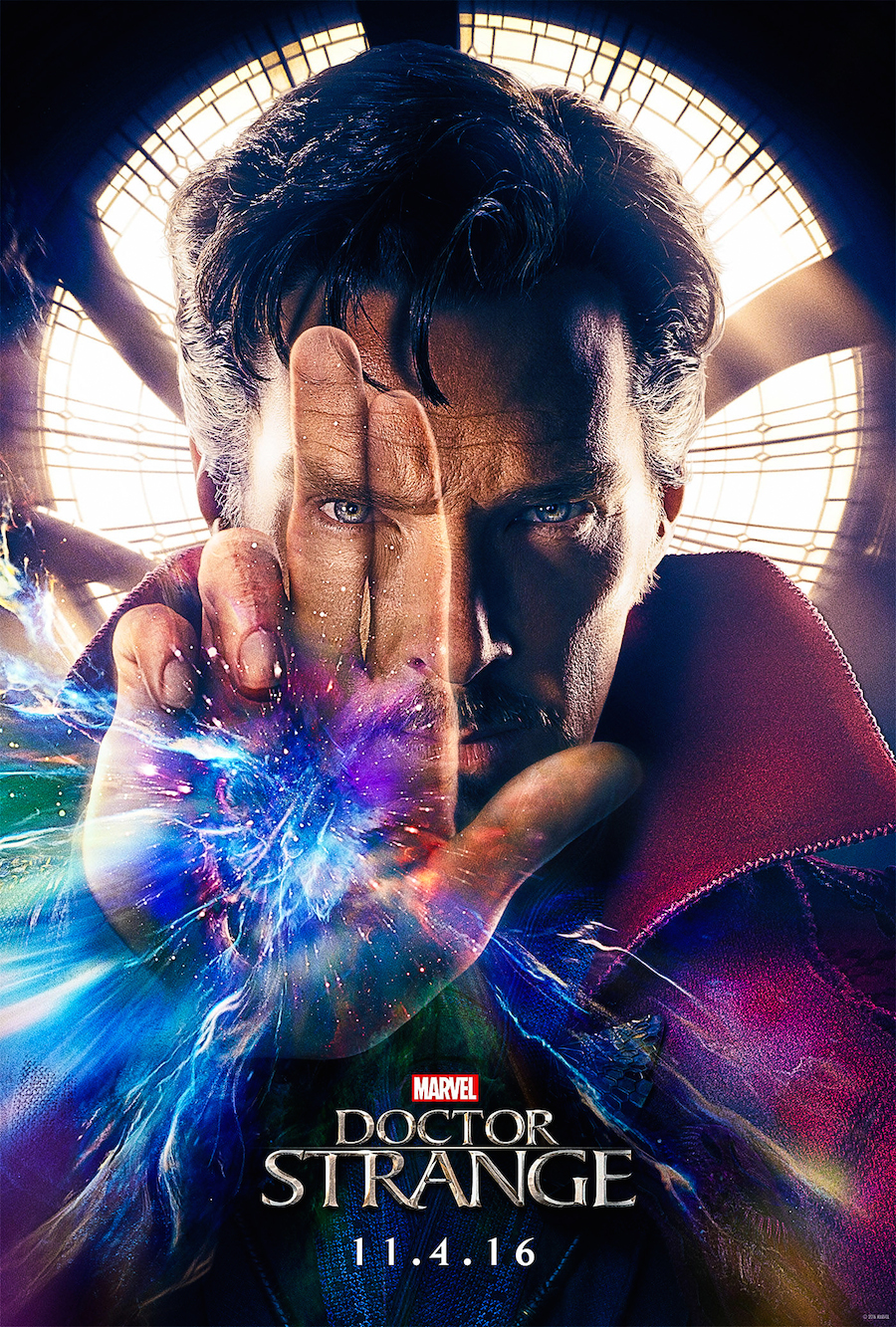 The Marvel Cinematic Universe (or MCU) is an experiment that, by now, should be failing. It’s a collection of (now) 14 movies, all of which are interconnected in that their stories effect one another and are set in the same world. It has an ever-expanding number of heroes leading their own individual films, which all, at one time or another, star in team-up movies where they all fight the same foe. It’s an experiment that’s had much of its success based on second-tier characters as Marvel Studios sold off the licensing rights to the most beloved and popular characters in their comics (Spider-Man and the X-Men) to other companies. Marvel’s most recent release, “Doctor Strange,” is based on a relatively obscure comic book character who practices metaphysical magic. It’s the kind of movie that, for any other franchise, would be a clear signal of decline and near collapse, yet “Doctor Strange” continues Marvel’s record of making highly entertaining movies that build off their past works without missing a beat. “Doctor Strange” isn’t a last gasp attempt to make money off of a dying empire, but rather an entertaining film that manages to be both every cliché, as one would expect, and something altogether new.

The plot follows the same structure as “Iron Man.” Our arrogant, wealthy, self-centered protagonist (then played by Robert Downey Jr., now Benedict Cumberbatch) undergoes severe injuries which transform his life and send him down the path to becoming a hero. Dr. Stephen Strange, the renowned neurosurgeon, gets himself into a near-death car crash. Having suffered permanent nerve damage to his hands and unable to heal them after several experimental surgeries, Dr. Strange spends the last of his money to travel across the globe to Nepal in search of a non-Western, spiritual cure to his problems. He instead stumbles upon something different altogether: a monastery whose members practice dimension-bending, trippy magic.

From there, the plot moves along like a standard origin story, in which Strange learns about magical powers, must rise to the challenge of fighting a powerful bad guy, flirts with his love interest, etc. There’s not a lot about the plot of “Doctor Strange” that’s unique. It’s a straightforward story, peppered with a plethora of literary archetypes to act as Strange’s friends and foes. There’s the Ancient One (Tilda Swinton), the mythical, seemingly eternal being who trains Strange. There’s Mordo (Chiwetel Ejiofor), the once dedicated sage who turns evil once he discovers his teacher, the Ancient One, and her lofty ideals aren’t as holy as he thought they were. There’s the villain, an arrogant former student by the name of Kaecilius (Mads Mikkelsen) who makes a pact with the devil in exchange for immortality. And there’s Christine Palmer (Rachel McAdams), who acts as Strange’s love interest.

Given the caliber of the film’s cast, it’s a shame that the movie doesn’t develop its characters further. The script by Jon Spahits, Scott Derrickson, and C. Robert Cargill keeps the story moving at a pace that’s simply too fast for its own good. Mordo and Kaicilius are fascinating characters with fascinating motivations, but are given too little screen time to even explain their conflicts and motives. Mordo’s fall from excellent student to betrayed villain is far too brief to be relatable, an obvious setup for a bad guy in the sequel, but one that feels like it could have been a compelling story arc in this film; Kaicilius is similarly given less time than he deserves. He lays out his motivations and is not-so-subtly portrayed as Strange’s mirror image (they’re both arrogant, intelligent, and driven by a fear of death) in one scene. It’s a great scene at that, but given Marvel’s track record with bad villains, it feels like a missed opportunity to see him given significant development on screen. Other characters fare slightly better, but on the whole, there’s the sense that the incredibly talented cast deserved something better.

Which is not to say that “Doctor Strange” doesn’t have good performances. In fact, I argue quite the opposite. Benedict Cumberbatch, mediocre American accent aside, absolutely nails both Strange’s arrogance and later humbleness, all the while bringing a sense of lightheartedness to the admittedly absurd proceedings. Chiwetel Ejiofor, while underutilized, is as good as ever, tackling his complex and underdeveloped character arc with nuance and humanity. Mads Mikkelsen is both deeply intimidating and occasionally relatable in his quest to escape mortality, a testament to his acting skills even though he’s only given a few moments to shine. Rachel McAdams, perhaps the most underutilized cast member, is still excellent, even if she only gets to use her charms as an actress to flirt with Strange.

Then there’s Tilda Swinton. I’d be remiss if I didn’t mention Marvel’s ridiculous whitewashing here. The character in the comics was, for many years, portrayed as an Asian stereotype, with a ridiculous accent and more. For one, Marvel did make some changes from the source material: the Ancient One of the comics was of Tibetan descent. But, given the enormous market for Hollywood blockbusters in China and the political controversy between them and Tibet, Marvel didn’t want to take the risk of losing the chance to show their film in China, so they placed the Ancient One in Nepal, and, for artistic choices, decided to gender-swap the character, and make her Celtic rather than Tibetan. However, while not wanting to lose China as a market is understandable, it doesn’t really make sense to whitewash the character given that the film no longer has any connection to Tibet. Nevertheless, I’d also be remiss if I didn’t give credit where credit is due. Swinton does a fantastic job as the Ancient One, with all her delightful eccentricity as an actress on full display.

But the true treat of “Doctor Strange” isn’t in its cast or characters, but the colorful, trippy, downright spectacular special effects. With Marvel’s standardly enormous budget, director Scott Derrickson and his creative team have cooked up a movie in which reality is constantly bended, often with electrifying results. Early on, Strange is launched on a journey through the multiverse, flying through colorful nightmares. A chase scene in Manhattan takes place as buildings swirl and bend like something out of an MC Escher painting. A fight scene takes place in the “astral plane” (essentially, a plane in the universe in which only your soul is present) as two ghostlike images of Strange and his foe punch each other through the walls of a hospital. Many of these effects have to be seen to be believed; it’s not only incredible that there’s enough money and technology in the world to bring them to life, but that someone was able to imagine such images in the first place.

The movie uses its unique aesthetic to its advantage; it’s not merely there to wow audiences by sheer wonder alone, but is used to deliver action sequences unlike anything Marvel has done before. Most other films in the MCU involve large-scale set pieces with shootouts and explosions. Here, the focus is less on our heroes mowing down waves of enemy soldiers and more on intimate fist fights set against ridiculous, magical backgrounds. It gives Derrickson the opportunity to focus his camera to cut back and forth between close-ups of his heroes fighting evil and the spectacular magic he’s conjured up. His fight scenes, unlike many others in the Marvel universe, have a sense of both intimacy and scale, delivering the thrills of fisticuffs with the awe of what special effects look like in 2016.

Really, that’s what makes “Doctor Strange” succeed as it does; it’s not about the plot or its characters, or its tidbits of Eastern philosophy dropped in every now and then. It’s the fun and thrill of a movie that’s both familiar, with a cookie-cutter but solid plot, and one that boasts jaw-dropping effects that are unlike anything you’ve ever seen. It’s a flawed movie, one that should have treated its cast and characters better than it did. But, above all, it’s an entertaining movie, the kind that you’ll enjoy watching but won’t forget as soon as the credits roll. It’s escapism, sure, but who wouldn’t want to escape to a world as magical as the one Stephen Strange inhabits?