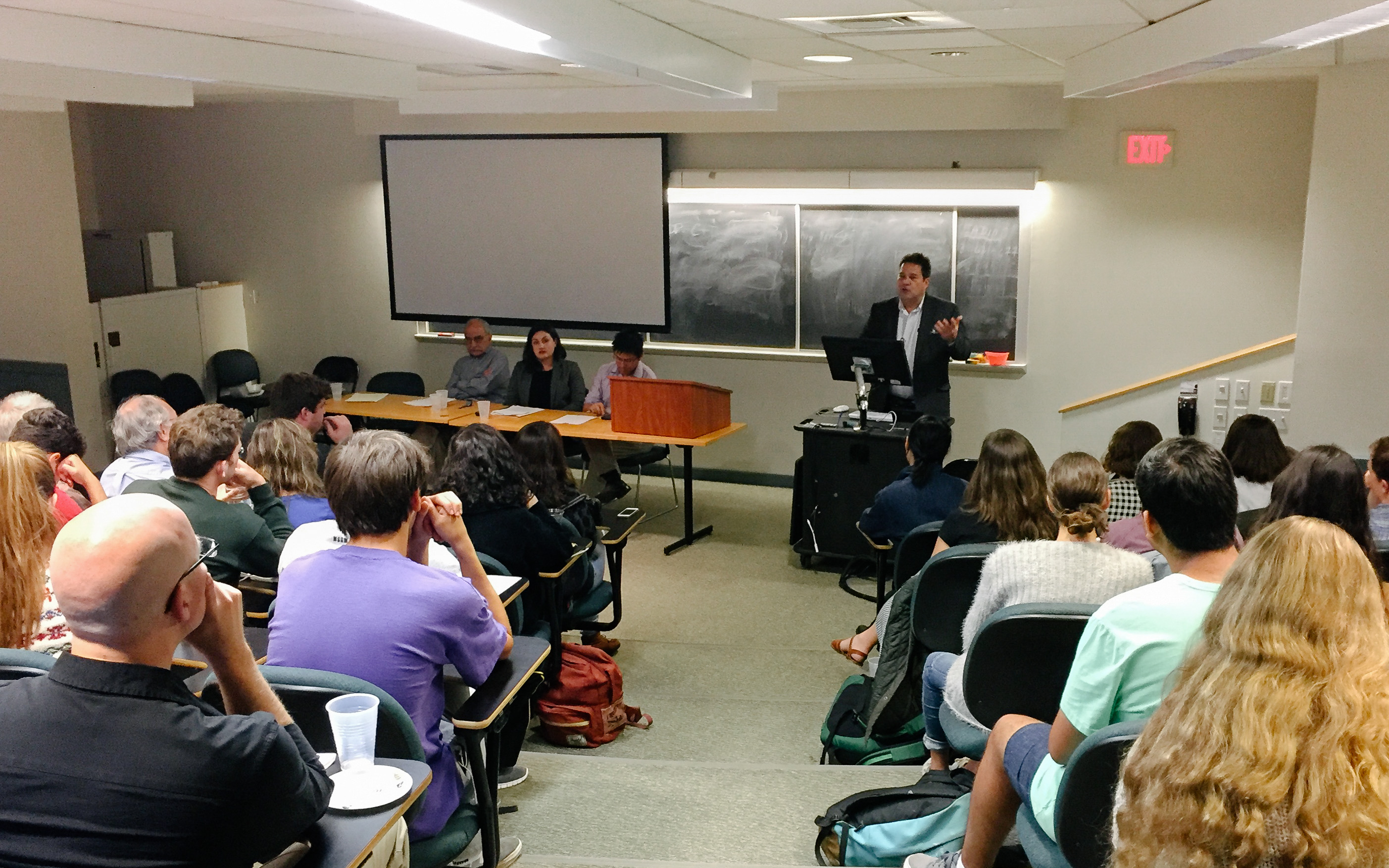 A meeting of the minds convened on Wednesday, Sept. 28 to address the rise of Donald J. Trump in the 2016 presidential election. Kicking off the History Department’s “History Matters” series for the year, the event was hosted by Professor Ying Jia Tan, featuring Dean of the Social Sciences and Professor of Public Policy Marc Eisner alongside Professor of History Ronald Schatz and Assistant Professor of History Victoria Smolkin.

Entitled “Why Trump? Why Now?”, the panel set out to explain Trump’s rise through various historical contexts, specifically in the United States, China, and Russia.

Being one of Trump’s favorite subjects, China played an immediate role when Tan kicked things off as host.

“Let me abuse my authority as chair to slip in a tongue in cheek answer to the question, ‘Why Trump? Why Now?’” Tan said. “Some compelling answers have been put forth by Chinese astrologists, who of course said that if you look at Donald Trump’s birth year, being born in the year of the dog, he seems to be entering a phase of good fortune since 2014. This year in particular, he’s entering a stage known as the stage of fire and earth, where he optimizes his five phases.”

Then, Tan got serious before lending the lectern to Schatz.

“On a more serious note, I think approaching this election from the perspective of an East Asian historian, I think we’re actually facing the very same set of issues that Confucius faced in how do we create a political leadership that is effective and moral?” he said.

Following Tan, Schatz addressed the packed lecture hall in the Public Affairs Center (PAC), focusing primarily on U.S. historical context and the implications of Trump’s rhetoric on the global stage.

“He undermines the confidence of other nations in the United States,” he said.

Schatz then laid out possible conditions that explain Trump’s rise. First is the rise in the presence and prominence of immigrants in the United States, which has simultaneously led to a feeling among many white Americans that their place in society has been diminished. Second, improvements in the status of black Americans has similarly led to a perceived reduction in status for whites, according to Schatz.

Third, a decrease in income relative to inflation among Americans without college degrees feeds into Trump’s dystopian vision of the country. The escalation of the War on Terror, especially in the form of terrorist attacks in major cities like Paris and Brussels (and even in the United States) has led to a paranoia that Trump perpetuates. Finally, Schatz posited that a fractured media environment, coupled with a Republican Party that he called “increasingly incoherent,” has left many Americans with what they see as only one choice: Donald J. Trump.

“There’s little or no common discourse,” Schatz said. “In this situation, Donald J. Trump can come to the fore, and we’ll have to deal with it one way or another.”

Then Eisner spoke, mainly addressing more recent data on Trump supporters and contextualizing his rise with that of the Tea Party.

Citing a Harvard study and subsequent book on the Tea Party, entitled “The Tea Party and the Remaking of Republican Conservatism,” by Theda Skocpol and Vanessa Williamson, Eisner argued that Trump’s ascendance is inherently tied to the rise of the Tea Party and its nationalist candidates, who rose to power after the election of President Barack Obama and the peak of the Great Recession before the 2010 midterms.

“[Tea Party supporters] suffer from an intense feeling of loss and fear, stemming from the shared sense that the world is changing, one of the things Skocpol and Williamson commonly refer to as this statement: ‘We want our country back,’” Eisner said.

The intensity of Tea Party support after the exogenous shock of the Great Recession led to a somewhat failed attempt of conservative advocacy groups, such as Americans for Prosperity, to harness grassroots support among voters who were not typical Republicans, according to Eisner.

“And then of course, various right wing advocacy groups, like Freedom Works, Americans for Prosperity, Club of Growth, all tried in some ways to harness the Tea Party, directed toward their traditional goals of privatizing Social Security and Medicare, cutting taxes on business, cutting back on regulations, cutting down public unions, promoting free trade, and even a more generous immigration policy, because these things are all good for business,” he said. “One of the things that they discovered was that some of these things resonated with Tea Party supporters, but many didn’t… When it came to privatizing Social Security or Medicare? No, thank you. Free trade? No, thank you. More generous immigration policy? No, thank you.”

Eisner then concluded by citing a Gallup study that found paradoxical data on Trump supporters. For instance, the relation between Trump supporters and distance from the Mexican border are inversely correlated, and they are more likely to be on Medicaid than supporters for any other candidate.

Another interesting finding for Eisner was the proximity of Trump supporters to people of color. The animosity of Trump supporters toward non-white groups was tied to their isolation in racially homogenous communities. Known in political science and social psychology as “contact theory,” people’s proximity to different social groups increases their tolerance of them overall, whereas distance breeds animosity.

Finally, Smolkin, who specializes in Russian history, spoke at length about Trump’s “bromance” with Vladimir Putin and the danger of Trump memes.

“Putin is the real world version of the person Trump pretends to be on television,” Smolkin said.

Memes, she contended, have consequences that play into the far-right’s hands. The bromance between Trump and Putin, for example, is given legitimacy with memes showing the two of them together through Photoshop.

“It’s a bromance, but it’s not an equal bromance,” she said.

Finally, Smolkin expressed concern over a general rejection of human rights shared by Trump, Putin, and their supporters.

Although aspects—notably overt racism—of Trump’s ascent were not addressed at any significant length by the panel with the exception of Schatz’s opening, each professor brought historical expertise to the talk. The question of “Why now?” was thoroughly answered, but “Why Trump?” remains an enigma for many.

“We would need a psychologist on the panel to answer the why Trump question,” Eisner joked.