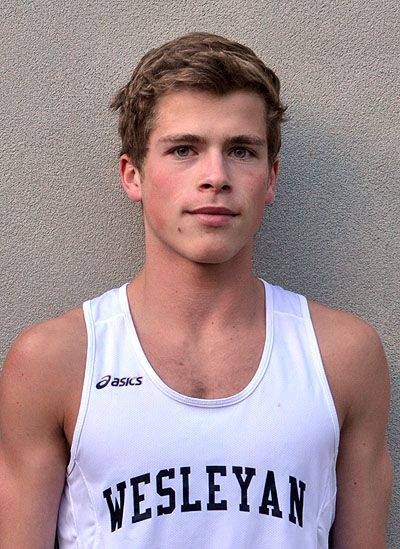 One of only two seniors on the cross country team, Reid Hawkins has presided over the team’s transformation into a national powerhouse. Wesleyan received an all-time record placement of 11th at Nationals last year, while Hawkins himself finished 124th in the nation with a time of 25:38.8. He recently placed second at the Wesleyan University Invitational Four-Miler at 20:48.15. In his last season, Hawkins is hungrier for glory than he’s ever been before. The Argus asked him a few questions about the season and the future of the Wesleyan cross country team.

The Argus: Any surprisingly good runs by new runners or runners who’ve improved?

Reid Hawkins: All of our underclassmen are running at a high level. We were hoping to have a few of the underclassmen handle the training well enough to actually perform, so seeing most of them have at least one of their two first races go well is really encouraging. Kevin [McMorrow ’20] obviously ran really well, and Adam [Linsky ’20] and Grant [Van Inwegen ’20] both stepped up a good amount from our first meet. Bill [Bajohr ’20] is dope. Noah [Langat ’20] is also dope. Conner [Sexton ’20] has just been kind of consistently and unsurprisingly okay (that’s a compliment).

A: In the U.S. Track & Field and Cross Country Coaches Association poll for most likely to win the men’s championships this year, Wesleyan received no votes behind 36 other D3 colleges, despite coming in 11th at Nationals last year and retaining many if not most of its best runners. Any comments? How does it change team dynamics to be “underdogs”? Do you feel you face disrespect as a team that has been less successful in the past? Does this add to the gravity of what you do?

RH: We’ve never really cared much about the rankings. Other teams get more talked up and are ranked higher than us based on things done by runners who graduated years ago. It does seem funny that everyone in the nation seems to remember a team that, for example, came 4th 10 years ago but forgets the team that came 11th last year. We try to get over stuff like this, but it can be frustrating, or even upsetting at times. We try to act like we don’t care—I even just said that we don’t—but we do. We really do. Every day we think about what could’ve been and it just gets us back down in the dumps.

A: How do you balance as a team the inherent internal competition of cross country with the co-operation of being a team? Is anything actively done regarding that?

A: Did the lack of outside competition change the dynamic of the Invitational Four-Miler race? Was it more difficult to motivate yourselves, or did it help by allowing you to set the pace yourselves?

RE: We used it as a chance to practice testing ourselves even when it might be a bit harder to get motivated. There’s no real option to take it easy if you’re not feeling great late in the season, so having an opportunity to get on the course and race hard purely out of self-generated motivation is great. Also, we split the team into two supposedly equal squads and raced for cookies. As usual, the teams were stacked and the team that won didn’t share their gluten-free prizes.

RH: Stepping up the distances and competition in races is mirrored by increased efforts in training, so it feels like a natural progression. We come out of the summer very fit but not quite race-ready, and try to just get better every time we get on the course. Psychologically, this is ruinous for the team. We had a meeting two days ago where two of our freshmen literally broke down in tears because they weren’t sure what their first race was. I’m personally not quite sure, but I know it’s somewhere out there. Just like love.

A: What are some of your goals looking forward, both athletically and for the team as a community? Can we look forward to Nationals?

RH: We can look forward to Nationals, or we can put our heads down and train until we make it there. The two are entirely mutually exclusive. I actually emailed some other guys on successful NESCAC teams, and they all said they hadn’t even heard of Nationals yet because they were so busy training. We want to be like those guys.

A: What competition is there to see at Paul Short? Is the team thinking about it, the Little Three, New England Championships, or just running?

RH: We do try to think about just running, but at a school like Wesleyan, it’s hard to avoid getting distracted. Like sometimes you’re just running around, then you see a cool art class in the CFA and you end up sitting through a great lecture on Van Gogh or Picasso. One time, Shota [Nakamura ’19] and I went out for a run and we planned on just thinking about the Little Three, then two hours later we were at Wes Thinks Big, just learning. Nobody knew where we were.

A: Do you believe you can continue the upward trends you’ve had in past years, based on these early results? What do you think will be the team’s greatest struggles or obstacles throughout the season?

RH: Honestly just finishing races. People don’t realize, but there [are] no barriers out there on the course for an 8K. You can literally just step off and stop running. This is really convenient when races are hard, because you can stop before it gets too hard. But we have to forget how convenient that is and not stop, because if you step off it’s harder to get back on.

A: Was there a difference in team dynamics, atmosphere, and/or relationships between, before, and after the invitational? If so, how has the team been affected?

RH: The team dynamic has pretty much stayed the same. We focus on taking everything as it comes and getting the work done, so having one day which was across the board good or okay doesn’t alter much.

RH: Yes. We have two freshmen from Jersey this year. It’s quite exciting. We also have awesome coaches. There are three of them, two girls and one boy. They know a lot about training and teach us lots. Every once in a while we listen and get much better.

A: We have small teams relative to Williams, Amherst, and other NESCAC schools (Amherst has 28 boys and 22 girls, for example). What does this mean for the team going forward?

RH: FYI, that’s a grand total of 50 people between Amherst’s two teams. Going into practice this morning, I was actually wondering what the size of Amherst’s team meant for us. I guess nothing, because they go to a different school and the size of their competing team (14 combined) will be the same size as ours (14 combined). Williams is scary though.